Post #308 - February 29, 1944 Everything Gets Scarcer and Scarcer and I Paid Off All My Debts, After Which I Had Very Little Left 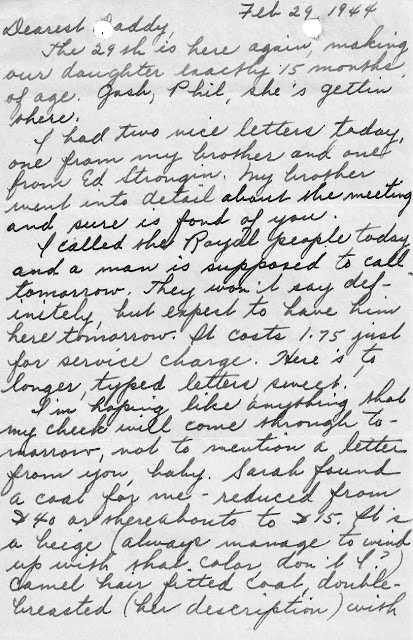 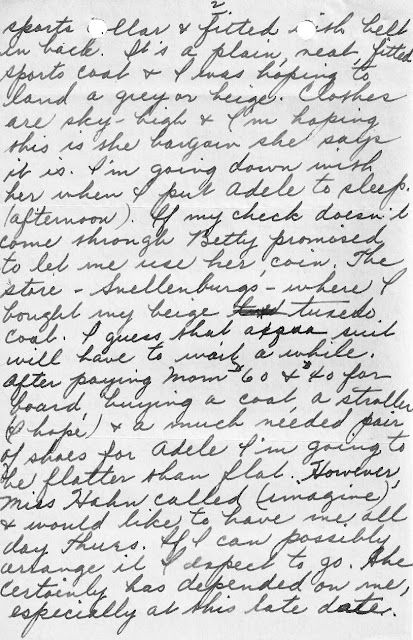 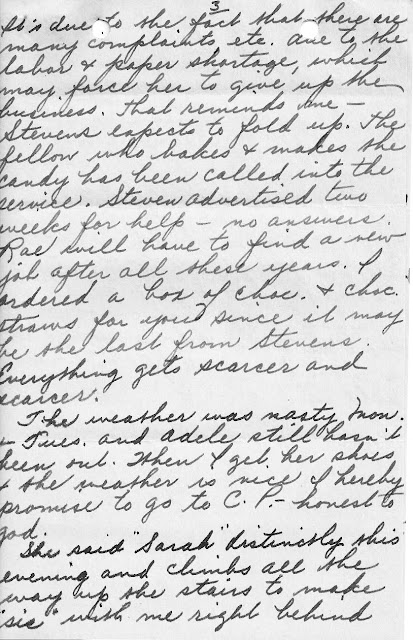 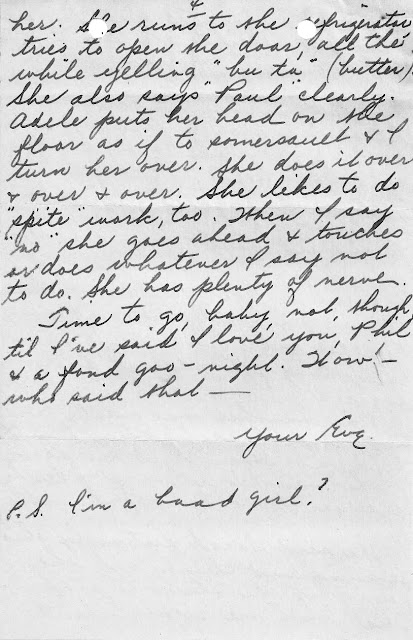 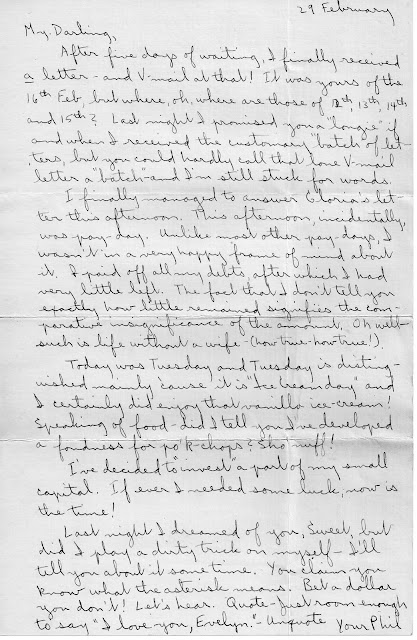 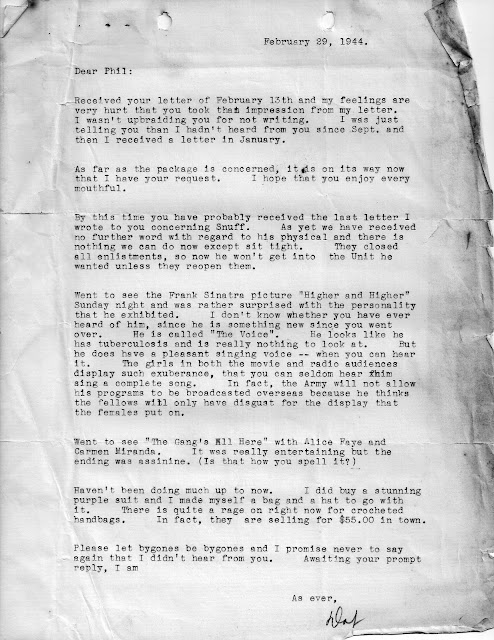 I had two nice letters today, one from my brother, and one from Ed Strongin. My brother went into detail about the meeting and sure is fond of you.

I called the Royal people today and a man is supposed to call tomorrow. They won't say definitely, but expect to have him here tomorrow. It costs $1.75 just for service charge. Here's to longer typed letters, sweet!

I'm hoping like anything that my check will come through tomorrow, not to mention a letter from you, baby. Sarah found a coat for me, reduced from $40, or thereabouts, to $15. It's a beige, (always manage to wind up with that color don't I?) camel hair, fitted coat, double-breasted (her description) with sports collar and fitted with belt in back. It's a plain, neat, fitted sports coat, and I was hoping to land a grey or beige. Clothes are sky-high, and I'm hoping this is the bargain she says it is. I'm going down with her when I put Adele to sleep (afternoon). If my check doesn't come through, Betty promised  to let me use her coin. The store—Snellenburgs—where I bought my beige tuxedo coat. I guess that aqua suit will have to wait a while. After paying Mom $60 plus $40 for board, buying a coat, a stroller (I hope) and a much needed pair of shoes for Adele I’m going to be flatter than flat. However, Miss Hahn called (imagine) and would like to have me all day Thurs. If I can possibly arrange it, I expect to go. She certainly has depended on me, especially at this late date. It's due to the fact that there are many complaints, etc. due to the labor and paper shortage, which may force her to give up the business. That reminds me—Stevens expects to fold up. The fellow who bakes and makes the candy has been called into the service. Steven advertised two weeks for help—no answers. Rae will have to find a new job after all these years. I ordered a box of chocolates and chocolate straws for you since it may be the last from Stevens. Everything gets scarcer and scarcer.

The weather was nasty Mon. and Tues. and Adele still hasn't been out. When I get her shoes and the weather is nice I hereby promise to go to Clare Pruett—honest to God.

She said “Sarah” distinctly this evening and climbs all the way up the stairs to make “sis” with with me right behind her. She runs to the refrigerator, tries to open the door, all the while yelling “bu ta”—(butter). She also says “Paul” clearly. Adele puts her head on the floor as if to somersault, and I turn her over. She does it over and over and over. She likes to do “spite” work, too. When I say “no” she goes ahead and touches or does whatever I say not to do. She has plenty of nerve.

Time to go, baby, not, though, til I've said I love you, Phil and a fond goo-night. Wow!—who said that—

After five days of waiting, I finally received a letter—and V-mail at that! It was yours of the 16th Feb., but where are where are those of 12th, 13th, 14th, and 15th? Last night I promised you a “longie” if and when I received the customary “batch” of letters, but you can hardly call that lone V-mail letter a “batch” —and I'm still stuck for words.

I finally managed to answer Gloria's letter this afternoon. This afternoon, incidentally, was pay-day. Unlike most other pay-days, I wasn't in a very happy frame of mind about it. I paid off all my debts, after which I had very little left. The fact that I don't tell you exactly how little remains signifies the comparative insignificance of the amount. Oh well—such is life without a wife—(how true—how true!).

Today was Tuesday, and Tuesday is distinguished mainly 'cause it is “Ice Cream Day” and I certainly did enjoy that vanilla ice cream! Speaking of food—did I tell you, I've developed a fondness for po’k-chops? Sho’ nuff!

I've decided to “invest” a part of my small capital. If I ever needed some luck, now is the time!

Last night I dreamed of you, Sweet, but did I play a dirty trick on myself—I'll tell you about it sometime. You claim you know what the asterisk means. Bet a dollar you don’t! Let's hear. Quote—Just room enough to say “I love you, Evelyn.” Unquote,

Received your letter of February 13th, and my feelings are very hurt that you took that impression from my letter. I wasn't upbraiding you for not writing, I was just telling you that I hadn't heard from you since Sept. and then I received a letter in January.

As far as the package is concerned, it is on its way now that I have your request, I hope that you enjoy every mouthful.

By this time you have probably received the last letter I wrote to you concerning Snuff. As yet, we have received no further word with regard to his physical, and there is nothing we can do now except sit tight. They closed all enlistments, so now he won't get into the Unit he wanted unless they reopen them.

Went to see the Frank Sinatra picture “Higher and Higher” Sunday night and was rather surprised with the personality that he exhibited. I don't know whether you have ever heard of him, since he is something new since you went over. He is called “The Voice.” He looks like he has tuberculosis and is really nothing to look at. But he does have a pleasant singing voice—when you can hear it. The girls in both the movie and radio audiences display such exuberance that you can seldom hear him sing a complete song. In fact, the Army will not allow his programs to be broadcasted overseas because he thinks the fellows will only have disgust for the display that the females put on.

Went to see “The Gangs All Here” with Alice Faye and Carmen Miranda. It was really entertaining, but the ending was asinine. (Is that how you spell it?)

Haven't been doing much up to now. I did buy a stunning purple suit and I made myself a bag and a hat to go with it. There is quite a rage on right now for crocheted handbags. In fact, they're selling for $55.00 in town.

Please let bygones be bygones and I promise never to say again that I didn't hear from you. Awaiting your prompt reply, I am

Posted by Marilyn at 2:48 PM No comments: