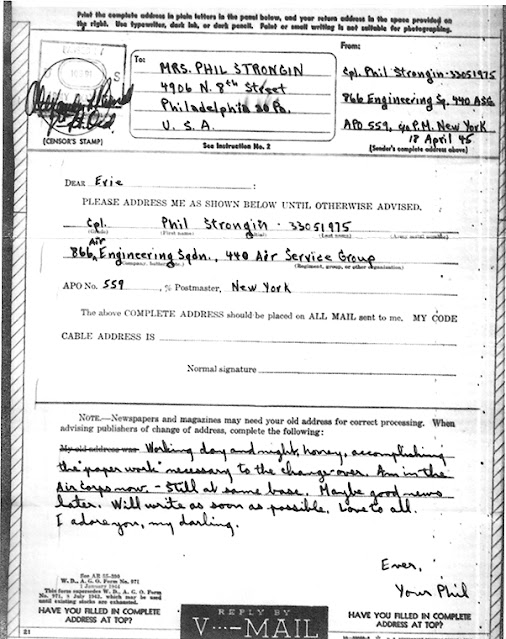 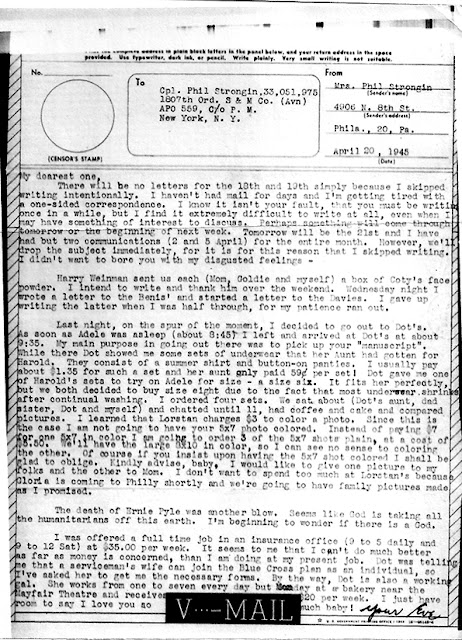 There will be no letters for the 18th and 19th simply because I skipped writing intentionally. I haven't had mail for days and I'm getting tired with a one-sided correspondence. I know it isn't your fault, that you must be writing once in a while, but I find it extremely difficult to write at all, even when I may have something of interest to discuss. Perhaps something new will come through tomorrow or the beginning of next week. Tomorrow will be the 21st and I have had but two communications (2 and 5 April) for the entire month. However, we'll drop the subject immediately, for it is for this reason that I skipped writing. I didn't want to bore you with my disgusted feelings -

Harry Weinman sent us each (Mom, Goldie and myself) a box of Coty's face powder. I intend to write and thank him over the weekend. Wednesday night I wrote a letter to the Benis’ and started a letter to the Davies. I gave up writing the latter when I was half through, for my patience ran out.

Last night, on the spur of the moment, I decided to go out to Dot's. As soon as Adele was asleep (about 8:45) I left and arrived at Dot's at about 9:35. My main purpose in going out there was to pick up your "manuscript". While there Dot showed me some sets of underwear that her Aunt had gotten for Harold. They consist of a summer shirt and button-on panties. I usually pay about $1.35 for such a set and her aunt only paid 59¢ per set! Dot gave me one of Harold's sets to try on Adele for size - a size six. It fits her perfectly, but we both decided to buy size eight due to the fact that most underwear shrinks after continual washing. I ordered four sets. We sat about (Dot's aunt, dad sister, Dot and myself) and chatted until 11, had coffee and cake and compared pictures, I learned that Lorstan charges $3 to color a photo. Since this is the case I am not going to have your 5x7 photo colored. Instead of paying $7 for one 5x7 in color, I am going to order 3 of the 5x7 shots plain, at a cost of $5.50. We’ll have the large 8x10 in color, so I can see no sense to coloring the other. Of course if you insist upon having the 5x7 shot colored I shall be glad to oblige. Kindly advise, baby, I would like to give one picture to my folks and the other to Mom. I don't want to spend too much at Lorstan's because Gloria is coming to Philly shortly and we're going to have family pictures made as I promised.

The death of Ernie Pyle was another blow. Seems like God is taking all the humanitarians off this earth. I'm beginning to wonder if there is a God.

I was offered a full time job in an insurance office (9 to 5 daily and 9 to 12 Sat) at 35.00 per week. It seems to me that I can't do much better as far as money is concerned, than I am doing at my present job. Dot was telling me that a serviceman's wife can join the Blue Cross plan as an individual, so I’ve asked her to get me the necessary forms. By the way, Dot is also a working gal. She works from one to seven every day but Monday at a bakery near the Mayfair Theatre and receives $20 per week. I just have room to say I love you so much baby!
Your Eve
Posted by Marilyn at 12:58 PM No comments: