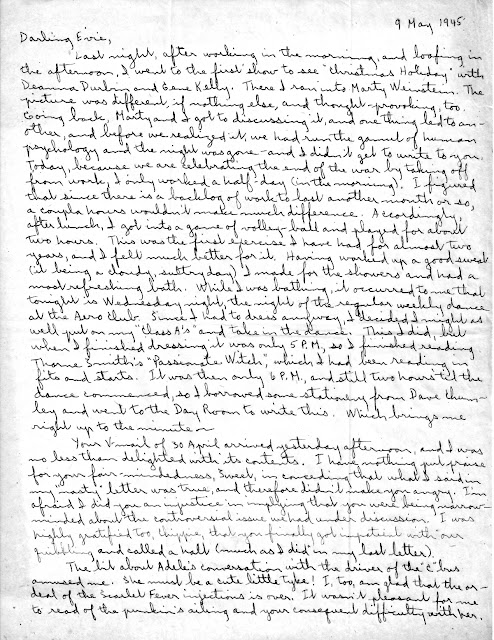 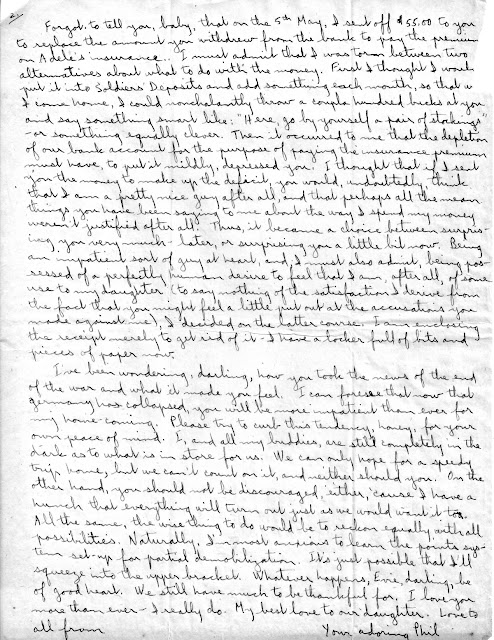 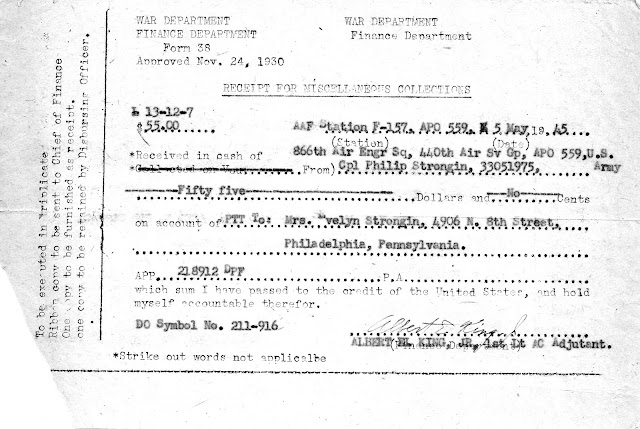 9 May 1945
Darling Evie,
Last night, after working in the morning, and loafing in the afternoon, I went to the first show to see "Christmas Holiday" with Deanna Durbin and Gene Kelly. There I ran into Marty Weinstein. The picture was different, if nothing else, and thought-provoking, too. Going back, Marty and I got to discussing it, and one thing led to another, and before we realized it, we had run the gamut of human psychology and the night was gone and I didn't get to write to you, Today because we are celebrating the end of the war by taking off from work, I only worked a half day (in the morning). I figured that since there is a backlog of work to last another month or so, a coupla hours wouldn't make much difference. Accordingly, after lunch, I got into a game of volleyball and played for about two hours. This was the first exercise I have had for almost two years, and I felt much better for it. Having worked up a good sweat (it being a cloudy, sultry day) I made for the showers and had a most refreshing bath. While I was bathing, it occurred to me that tonight is Wednesday night, the night of the regular weekly dance at the Aero Club. Since I had to dress anyway, I decided I might as well put on my "class A's" and take in the dance. This I did, but when I finished dressing it was only 5 P.M., so I finished reading Thorne Smith's “Passionate Witch", which I had been reading in fits and starts. It was then only 6 P. M., and still two hours ’til the dance commenced, so I borrowed some stationery from Dave Chumley and went to the Day Room to write this, which brings me right up to the minute—

Your V-mail of 30 April arrived yesterday afternoon, and I was no less than delighted with its contents. I have nothing but praise for your fair-mindedness, Sweet, in conceding that what I said in my “nasty” letter was true, and therefore didn’t make you angry. I'm afraid I did you an injustice in implying that you were being narrow-minded about the controversial issue we had under discussion. I was highly gratified, too, Chippie, that you finally got impatient with our quibbling and called a halt (much as I did in my last letter).
The bit about Adele's conversation with the driver of the "C” bus amused me. She must be a cute little tyke! I, too, am glad that the ordeal of the Scarlet Fever injections is over. It wasn't pleasant for me to read of the punkin's ailing and your consequent difficulty with her.

Forgot to tell you, baby, that on the 5th May, I sent off $55.00 to you to replace the amount you withdrew from the bank to pay the premium on Adele's insurance. I must admit that I was torn between two alternatives about what to do with the money. First I thought I would put it into Soldiers' Deposits and add something each month, so that when I come home, I could nonchalantly throw a coupla hundred bucks at you and say something smart like: "Here, go by yourself a pair of stockings"—or something equally clever. Then it occurred to me that the depletion of our bank account for the purpose of paying the insurance premium must have, to put it mildly, depressed you. I thought that if I sent you the money to make up the deficit, you would undoubtedly, think that I am a pretty nice guy after all, and that perhaps all the mean things you have been saying to me about the way I spend my money weren’t justified after all. Thus, it became a choice between surprising you very much—later, or surprising you a little bit now. Being an impatient sort of guy at heart, and I must also admit being possessed of a perfectly human desire to feel that I am, after all, of some use to my daughter (to say nothing of the satisfaction I derive from the fact that you might feel a little put out at the accusations you made against me), I decided on the latter course. I am enclosing the receipt merely to get rid of it - I have a locker full of bits and pieces of paper now.

I've been wondering, darling, how you took the news of the end of the war and what it made you feel. I can foresee that now that Germany has collapsed, you will be more impatient than ever for my home-coming. Please try to curb this tendency, honey, for your own peace of mind. I, and all my buddies, are still completely in the dark as to what is in store for us. We can only hope for a speedy trip home, but we can't count on it, and neither should you. On the other hand, you should not be discouraged, either, 'cause I have a hunch that everything will turn out just as we would want it to. All the same, the wise thing to do would be to reckon equally with all possibilities. Naturally, I'm most anxious to learn the points system set-up for partial demobilization. It's just possible that I'll squeeze into the upper bracket. Whatever happens, Evie, darling, be of good heart. We still have much to be thankful for. I love you more than ever—I really do. My best love to our daughter. Love to all from

Your adoring Phil
Posted by Marilyn at 7:38 AM No comments: