Post #510 - November 15, 1944 Sometimes I Find It Difficult to Believe That We Have a Daughter Two Years Old! and I Was “Propositioned” by a “Piccadilly Commando” 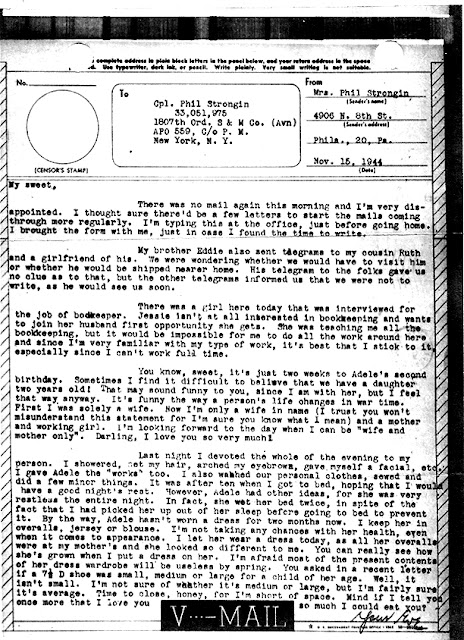 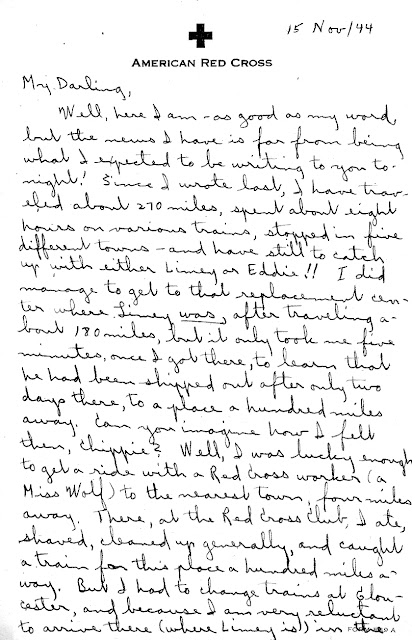 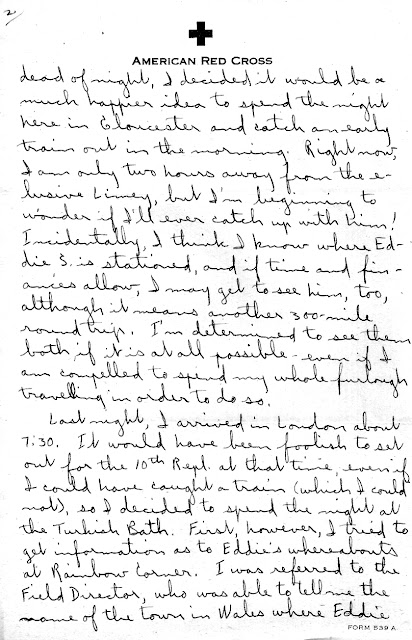 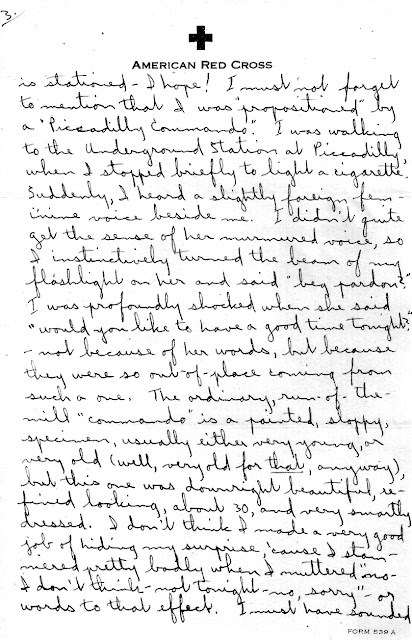 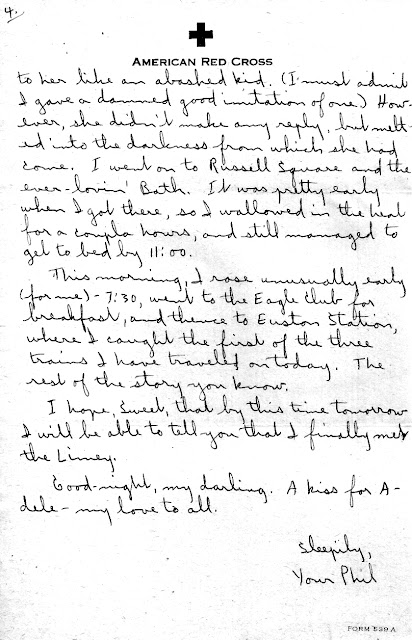 There was no mail again this morning and I'm very disappointed. I thought sure there'd be a few letters to start the mails coming through more regularly. I'm typing this at the office, just before going home. I brought the form with me, just in case I found the time to write.

My brother Eddie also sent telegrams to my cousin Ruth and a girlfriend of his. We were wondering whether we would have to visit him or whether he would be shipped nearer home. His telegram to the folks gave us no clue as to that, but the other telegrams informed us that we were not to write, as he would see us soon.

There was a girl here today that was interviewed for the job of bookkeeper. Jessie isn't at all interested in bookkeeping and wants to join her husband first opportunity she gets. She was teaching me all the bookkeeping, but it would be impossible for me to do all the work around here and since I'm very familiar with my type of work, it's best that I stick to it especially since I can't work full time.

You know, sweet, it's just two weeks to Adele's second birthday. Sometimes I find it difficult to believe that we have a daughter two years old! That may sound funny to you, since I am with her, but I feel that way anyway. It's funny the way a person's life changes in war time. First I was solely a wife. Now I'm only a wife in name (I trust you won't misunderstand this statement for I'm sure you know what I mean) and a mother and working girl. I'm looking forward to the day when I can be "wife and mother only". Darling, I love you so very much!

Last night I devoted the whole of the evening to my person. I showered, set my hair, arched my eyebrows, gave myself a facial, etc. I gave Adele the “works" too. I also washed our personal clothes, sewed and did a few minor things. It was after ten when I got to bed, hoping that I would have a good night's rest. However, Adele had other ideas, for she was very restless the entire night. In fact, she wet her bed twice, in spite of the fact that I had picked her up out of her sleep before going to bed to prevent it. By the way, Adele hasn't worn a dress for two months now. I keep her in overalls, jersey or blouse. I'm not taking any chances with her health, even when it comes to appearance. I let her wear a dress today, as all her overalls were at my mother's and she looked so different to me. You can really see how she's grown when I put a dress on her. I'm afraid most of the present contents of her dress wardrobe will be useless by spring. You asked in a recent letter if a 7-1/2 D shoe was small, medium or large for a child of her age. Well, it Isn't small. I'm not sure of whether it's medium or large, but I'm fairly sure it's average. Time to close, honey, for I'm short of space. Mind if I tell you once more that I love you so much I could eat you?
Your Eve

My Darling,
Well, here I am - as good as my word, but the news I have is far from being what I expected to be writing to you tonight! Since I wrote last, I have traveled about 270 miles, spent about eight hours on various trains, stopped in five different towns and have still to catch up with either Limey or Eddie!! I did manage to get to that replacement center where Limey was, after traveling about 180 miles, but it only took me five minutes, once I got there, to learn that he had been shipped out after only two days there, to a place a hundred miles away. Can you imagine how I felt then, Chippie? Well, I was lucky. to get a ride with a Rad Cross worker (a Miss Wolf) to the nearest town, four miles away. There, at the Red Cross Club, I ate, shaved, cleaned up generally, and caught a train for this place a hundred miles away. But I had to change trains at Gloucester, and because I am very reluctant to arrive there (where Limey is) in the dead of night, I decided it would be a much happier idea to spend the night here in Gloucester and catch an early train out in the morning. Right now I am only two hours away from the elusive Limey, but I'm beginning to wonder if I'll ever catch up with him! Incidentally, I think I know where Eddie S. is stationed, and if time and finances allow, I may get to see him, too, although it means another 300-mile round trip. I'm determined to see them both if it is at all possible, even if I am compelled to spend my whole furlough traveling in order to do so.

Last night, I arrived in London about 7:30. It would have been foolish to set out for the 10th Repl. at that time, even if I could have caught a train (which I could not), so I decided to spend the night at the Turkish Bath. First, however, I tried to get information as to Eddie's whereabouts at Rainbow Corner. I was referred to the Field Director, who was able to tell me the name of the town in Wales where Eddie is stationed - I hope! I must not forget to mention that I was propositioned by a "Piccadilly Commando”. I was walking to the Underground Station at Piccadilly when I stopped briefly to light a cigarette. Suddenly, I heard a slightly foreign feminine voice beside me. I didn't quite get the sense of her murmured voice, so instinctively turned the beam of my flashlight on her and said "beg pardon?” I was profoundly shocked when she said "would you like to have a good time tonight? - not because of her words, but because they were so out of place coming from such a one. The ordinary, run-of-the-mill “commando” is a painted, sloppy specimen, usually either very young, or very old (well, very old for that, anyway), but this one was downright beautiful, refined looking, about 30, and very smartly dressed. I don't think I made a very good job of hiding my surprise, ’cause I stammered pretty badly when I muttered “no - I don't think - not tonight - no, sorry" - or words to that effect. I must have sounded to her like an abashed kid. (I must admit I gave a damned good imitation of one.) However, she didn't make any reply, but melted into the darkness from which she had come. I went on to Russell Square and the ever-lovin' Bath. It was pretty early when I got there, so I wallowed in the heat for a couple hours, and still managed to gel to bed by 11:00.

This morning, I rose unusually early (for me) - 7:30, went to the Eagle Club for breakfast, and thence to Euston Station where I caught the first of the three trains I have traveled on today. The rest of the story you know.

I hope, sweet, that by this time tomorrow I will be able to tell you that I finally met the Limey,

Good-night, my darling. A kiss for Adele - my love to all.

Sleepily,
Your Phil
Posted by Marilyn at 9:35 AM No comments: