Post #612 - March 22, 1945 I Keep Wondering, Almost Constantly Whether or Not I Shall See You in ’45 and Everything Looks So Calm and Peaceful, That It Strikes Me as a Distinct Paradox That War Planes are Droning in the Sky 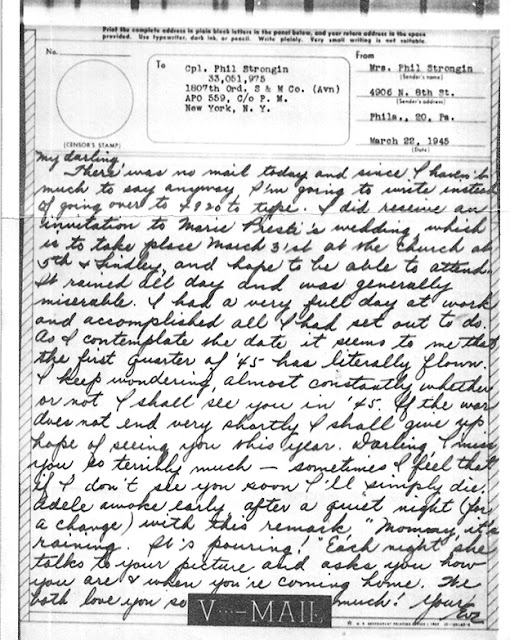 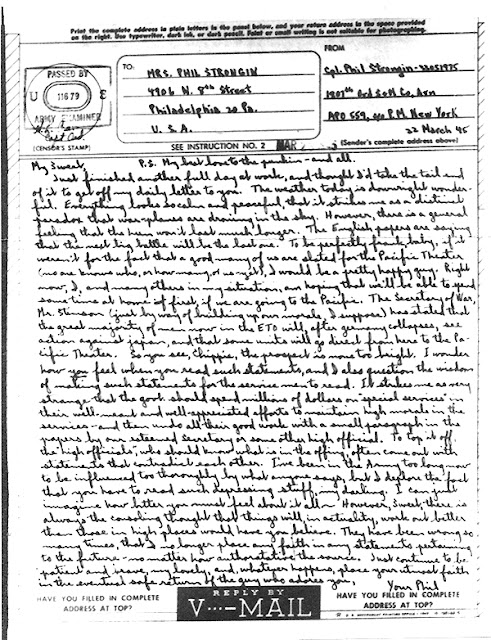 March 22, 1945
My darling,
There was no mail today and since I haven’t much to say anyway, I’m going to write instead of going over to 4920 to type. I did receive an invitation to Marie Presti’s wedding, which is to take place March 31st at the church at 5th & Lindley, and hope to be able to attend. It rained all day and was generally miserable. I had a very full day at work and accomplished all I had set out to do.  As I contemplate the date it seems to me that the first quarter of ’45 has literally flown. I keep wondering, almost constantly whether or not I shall see you in ’45. If the war does not end very shortly I shall give up hope of seeing you this year. Darling, I miss you so terribly much—sometimes I feel that if I don’t see you soon I’ll simply die. Adele awoke early, after a quiet night (for a change) with this remark, “Mommy, it’s raining. It’s pouring!” Each night she talks to your picture and asks you how you are & when you’re coming home. We both love you so much!
Your Eve
22 March 1945
My Sweet,
Just finished another full day at work, and thought I’d take the tail end of it to get off my daily letter to  you. The weather today is downright wonderful. Everything looks so calm and peaceful, that it strikes me as a distinct paradox that war planes are droning in the sky. However, there is a general feeling that the hum won’t last much longer. The English papers are saying that the next big battle will be the last one. To be perfectly frank, baby, if it weren’t for the fact that a good many of us are slated for the Pacific Theater (no one knows who, or how many of us yet), I would be a pretty happy guy. Right now, I, and many others in my situation, am hoping that we’ll be able to see some time at home first, if we are going to the Pacific. The Secretary of War, Mr. Stinson (just by way of building up our morale, I suppose) has stated that the great majority of men now in the ETO will, after Germany collapses, see action against Japan, and that some units will go direct from here to the Pacific Theater. So you see, Chippie, the prospect is none too bright. I wonder how you feel when you read such statements, and I also question the wisdom of making such statements for the service men to read. It strikes me as very strange that the gov’t. should spend millions of dollars on “special services” in their well-meant and well-appreciated efforts to maintain high morale in the services—and then undo all their good work with a small paragraph in the papers by our esteemed Secretary or some other high official. To top it off, the “high officials,” who should know what is in the offing, often come out with statements that contradict each other. I’ve been in the Army too long now to be influenced too thoroughly by what anyone says, but I deplore the fact that you have to read such depressing stuff, my darling. I can just imagine how bitter you must feel about it all—However, Sweet, there is always the consoling thought that things will, in actuality, work out better than those in high places would have you believe. They have been wrong so many times, that I no longer place any faith in any statements pertaining to the future—no matter how authoritative the source. Just continue to be patient and brave, my lovely, and, whatever happens, place your utmost faith in the eventual safe return of the guy who adores you,
Your Phil
P.S. My best love to the punkin—and all.
Posted by Marilyn at 1:17 PM No comments: