Post #423 - July 26, 1944 Mom Came Home This Morning as Harry Asked Her to Come Home and There’s Always the Good Ole American Jive to Make Me Homesick 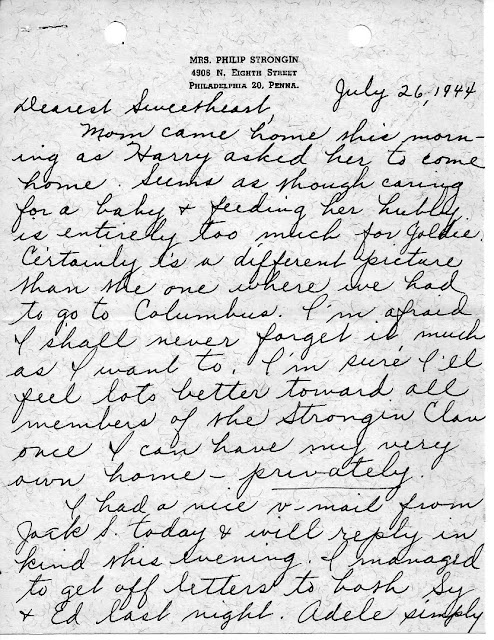 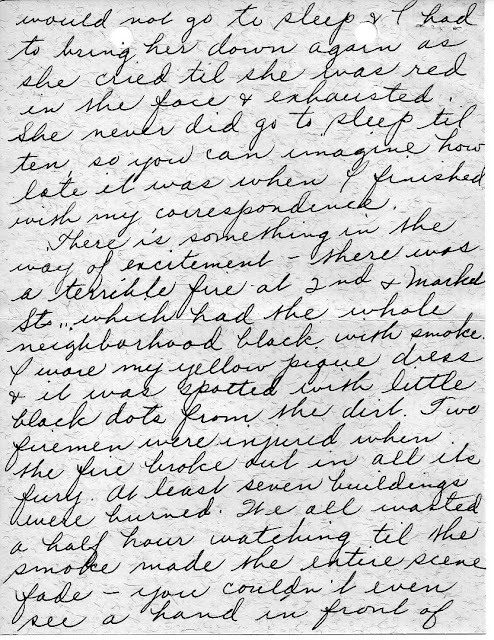 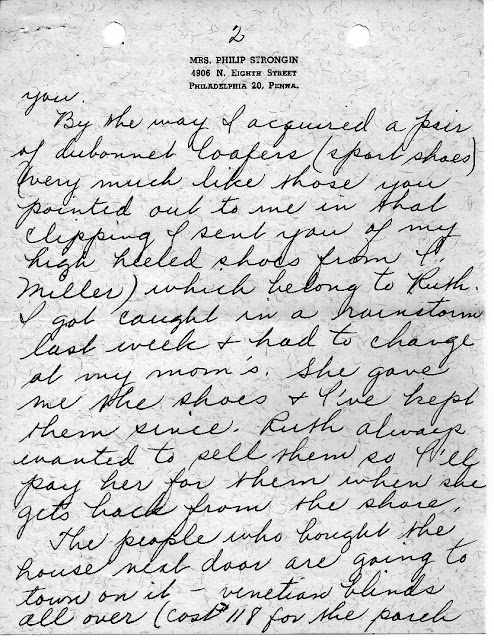 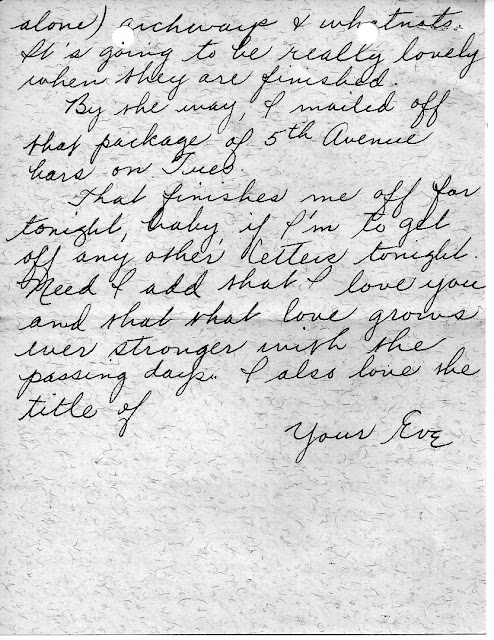 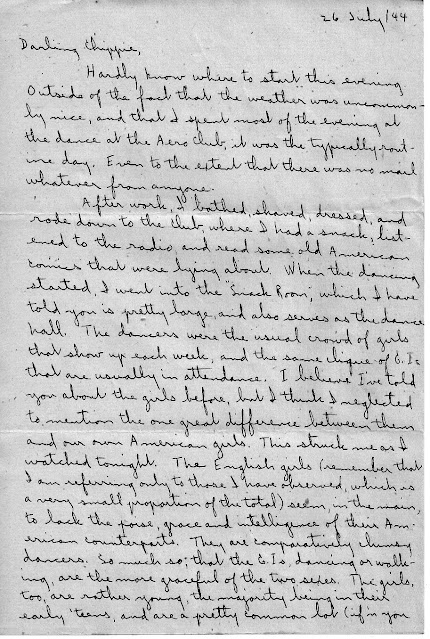 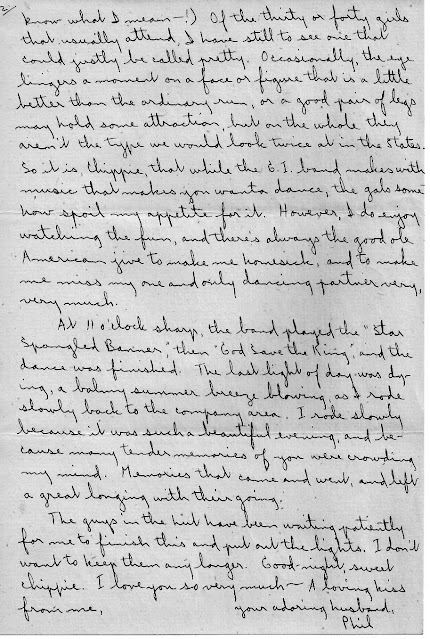 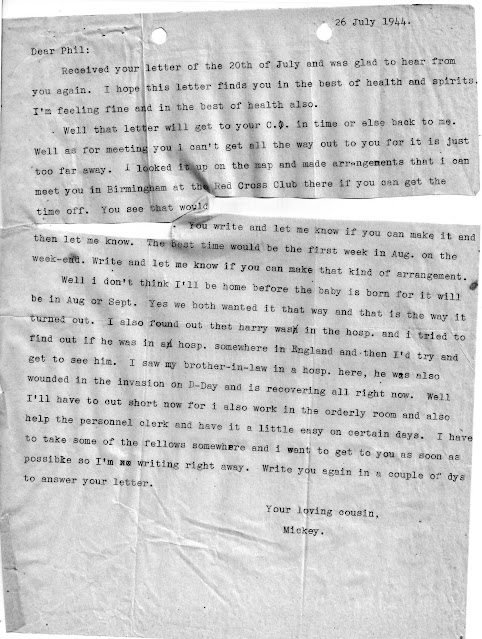 July 26, 1944
Dearest Sweetheart,
Mom came home this morning as Harry asked her to come home. Seems as though caring for a baby and feeding her hubby is entirely too much for Goldie. Certainly is a different picture than the one where we had to go to Columbus. I'm afraid I shall never forget it much as I want to, I'm sure I'll feel lots better toward all members of the Strongin Clan once I can have my very own home—privately.

I had a nice v-mail from Jack S. today and will reply in kind this evening. I managed to get off letters to both Sy and Ed last night. Adele simply would not go to sleep and I had to bring her down again as she cried til she was red in the face and exhausted. She never did go to sleep til ten, so you can imagine how late it was when I finished with my correspondence.

There is something in the way of excitement—there was a terrible fire at 2nd & Market Sts. which had the whole neighborhood black with smoke. I wore my yellow piqué dress and it was spotted with little black dots from the dirt. Two firemen were injured when the fire broke out in all its fury. At least seven buildings were burned. We all waited a half hour watching til the smoke made the entire scene fade—you couldn’t even see a hand in front of you.
By the way I acquired a pair of dubonnet loafers (sport shoes) much like those you pointed out to me in that clipping I sent you of my high heeled shoes from I. Miller) which belong to Ruth. I got caught in a rainstorm last week and had to change at my mom's. She gave me the shoes and l’ve kept them since. Ruth always wanted to sell them so I’ll pay her for them when she gets back from the shore.

The people who bought the house next door are going to town on it—venetian blinds all over (cost $118 for the porch alone) archways and whatnots. It’s going to be really lovely when they are finished.

By the way, I mailed off that package of 5th Avenue bars on Tues.

That finishes me off for tonight, baby, if I'm to get off any other letters tonight. Need I add that I love you and that that love grows ever stronger with the passing days. I also love the title of

Hardly know where to start this evening. Outside of the fact that the weather was uncommonly nice, and that I spent most of the evening at the dance at the Aero club, it was the typically routine day. Even to the extent that there was no mail whatever from anyone.

After work, I bathed, shaved, dressed, and rode down to the club, where I had a snack, listened to the radio, and read some old American comics that were lying about. When the dancing started, I went into the “Snack Room,” which I have told you is pretty large, and also serves as the dance hall. The dancers were the usual crowd of girls that show up each week, and the same clique of G.I.s that are usually in attendance. I believe I've told you about the girls before, but I think I neglected to mention the one great difference between them and our own American girls. This struck me as I watched tonight. The English girls (remember that I am referring only to those t have observed, which is a very small proportion of the total) seem, in the main, to lack the poise, grace and intelligence of their American counterparts. They are comparatively clumsy dancers. So much so that the G.I.s, dancing or walking, are the more graceful of the two sexes. The girls, too, are rather young, the majority being in their early teens, and are a pretty common lot (if’n you know what I mean—!) of the thirty or forty girls that usually attend, I have still to see one that could justly be called pretty. Occasionally, the eye lingers a moment on a face or figure that is a little better than the ordinary run, or a good pair of legs may hold some attraction, but on the whole they aren't the type we would look twice at in the States. So it is, Chippie, that while the G.I. band makes with music that makes you wanta dance, the gals somehow spoil my appetite for it. However, I do enjoy watching the fun, and there's always the good ole American jive to make me homesick, and to make me miss my one and only dancing partner very, very much.

A 11 o'clock sharp, the band played the "Star Spangled Banner" then "God Save the King, and the dance was finished. The last light of day was dying, a balmy summer breeze blowing, as I rode slowly back to the company area. I rode slowly because it was such a beautiful evening, and because many tender memories of you were crowding my mind. Memories that came and went, and left a great longing with their going.
The guys in the hut have been waiting patiently for me to finish this and put out the lights. I don't want to keep them any longer. Good-night, sweet Chippie. I love you so very much—A loving kiss from me,

Well that letter will get to your C.O. in time or else back to me. Well as for meeting you I can't get all the way out to you for it is just too far away. I looked it up on the map and made arrangements that I can meet you in Birmingham at the Red Cross Club there if you can get the time off. You see that would

Well I don't think I'll be home before the baby is born for it will be in Aug. or Sept. Yes we both wanted it that way and that is the way it turned out. I also found out that Harry was in the hosp. and I tried to find out if he was in a hosp. somewhere in England and then I'd try and get to see him. I saw my brother-in-law in a hosp. here, he was also wounded in the invasion on D-Day and is recovering all right now. Well I'll have to cut short now for I also work in the orderly room and also help the personnel clerk and have it a little easy on certain days. I have to take some of the fellows somewhere and I want to get to you as soon as possible so I'm writing right away. Write you again in a couple of days to answer your letter.

Your loving cousin,
Mickey
Posted by Marilyn at 8:38 AM No comments: