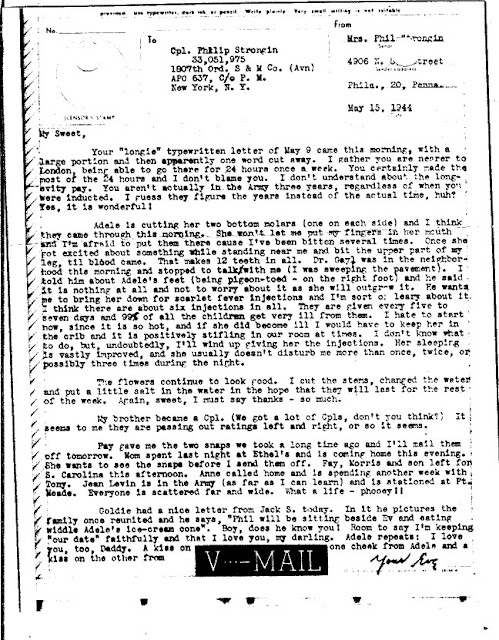 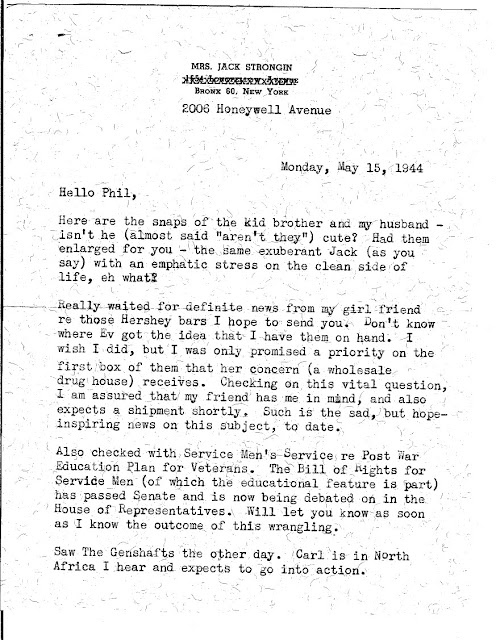 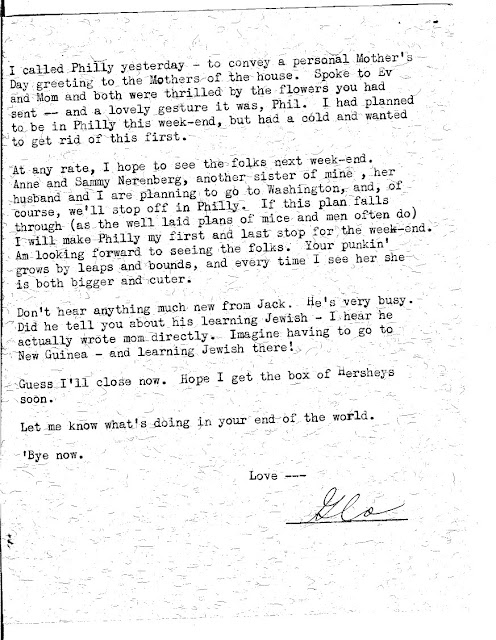 Your “longie” typewritten letter of May 9 came this morning with a large portion and then apparently one word cut away, I gather you are nearer to London, being able to go there for 24 hours once a week. You certainly made the most of the 24 hours, and I don't blame you. I don't understand about the longevity pay. You aren't actually in the army three years, regardless of when you were inducted. I guess they figured the years instead of the actual time, huh? Yes, it is wonderful! ]

Adele is cutting her two bottom molars, one on each side, and I think they came through this morning. She won't let me put my fingers in her mouth and I'm afraid to put them there 'cause I've been bitten several times. Once she got excited about something while she was standing near me and bit the upper part of my leg, til blood came. That makes 12 teeth and all. Doctor Gayl was in the neighborhood this morning and stopped to talk with me (I was sweeping the pavement). I told him about Adele's feet (being pigeon-toed - on the right foot) and he said it is nothing at all and not to worry about it as she will outgrow it. He wants me to bring her down for scarlet fever injections and I'm sort of leary about. I think there are about six injections in all. They are given every five to seven days and 99% of all the children get very ill from them. I hate to start now since it is so hot, and if she did become ill I would have to keep her in the crib and it is positively stifling in our room at times. I don't know what to do, but, undoubtedly, I'll wind up giving her the injections. Her sleeping is vastly improved and she usually doesn't disturb me more than once twice, or possibly three times during the night.

The flowers continue to look good. I cut the stems, changed the water and put a little salt in the water in the hope that they will last for the rest of the week. Again, sweet, I must say thanks - so much.

My brother became a Cpl. (We have a lot of Cpls, don't you think?) It seems to me they are passing out ratings left and right, or so it seems. T

Fay gave me the two snaps we took along time ago and I'll mail them off tomorrow. Mom spent last night at Ethel's and is coming home this evening. She wants to see the snaps before I send them off. Fay, Morris and son left for S. Carolina this afternoon. Anne called home and is spending another week with Tony. Jean Levin is in the army (as far as I can learn) and is stationed at Ft. Meade. Everyone is scattered far and wide. What a life - phooey!!

Goldie had a nice letter from Jack S. today. In it he pictures the family once united and he says “Phil be sitting beside Ev and eating widdle Adele's ice cream cone.” Boy, does she know you! Room to say I'm keeping “our date” faithfully and I love you, my darling. Adele repeats: I love you, too, Daddy. A kiss on one cheek from Adele and a kiss on the other from

Here are the snaps of the kid brother and my husband - isn't he (almost said "aren't they") cute? Had them enlarged for you - the same exuberant Jack (as you say) with an emphatic stress on the clean side of life, eh what?

Really waited for definite news from my girlfriend re those Hershey bars I hope to send you. Don't know where Ev got the idea that I have them on hand. I wish I did, but I was only promised a priority on the first box of them that her concern (a wholesale drug house) receives. Checking on this vital question, I am assured that my friend has me in mind, and also expects a shipment shortly. Such is the sad, but hope-inspiring news on this subject, to date.

Also checked with Service Men's Service, re Post War Education Plan for Veterans. The Bill of Rights for Service Men (of which the educational feature is part) has passed Senate and is now being debated on in the House of Representatives. Will let you know as soon as I know the outcome of this wrangling.

Saw The Genshafts the other day. Carl is in North Africa I hear and expects to go into action.

I called Philly yesterday - to convey a personal Mother's Day greeting to the Mothers of the house. Spoke to Ev and Mom and both were thrilled by the flowers you had sent -- and a lovely gesture it was, Phil. I had planned to be in Philly this week-end, but had a cold and wanted to get rid of this first.

At any rate, I hope to see the folks next week-end. Anne and Sammy Nerenberg, another sister of mine, her husband and I are planning to go to Washington, and, of course, we’ll stop off in Philly. If this plan falls through (as the well laid plans of mice and men often do) I will make Philly my first and last stop for the week-end. Am looking forward to seeing the folks. Your punkin' grows by leaps and bounds, and every time I see her she is both bigger and cuter.

Don't hear anything much new from Jack. He's very busy. Did he tell you about his learning Jewish - I hear he actually wrote mom directly. Imagine having to go to New Guinea - and learning Jewish there!

Guess I'll close now. Hope I get the box of Hersheys soon.

Let me know what's doing in your end of the world.