Post #322 - March 17, 1944 There Isn’t a Person in this Block that Doesn’t Have His or Her Own Business and Ruthie Certainly Isn’t Wasting Any Time Growing Up! 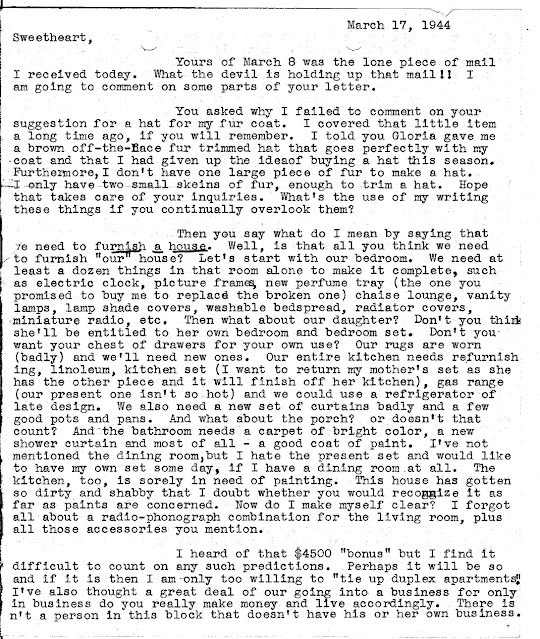 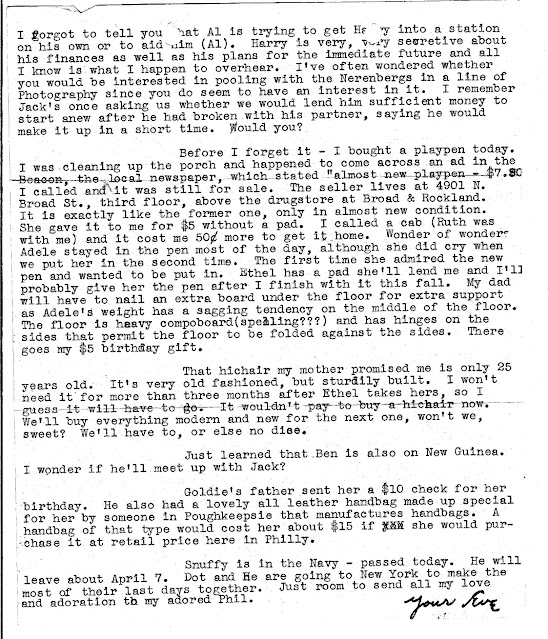 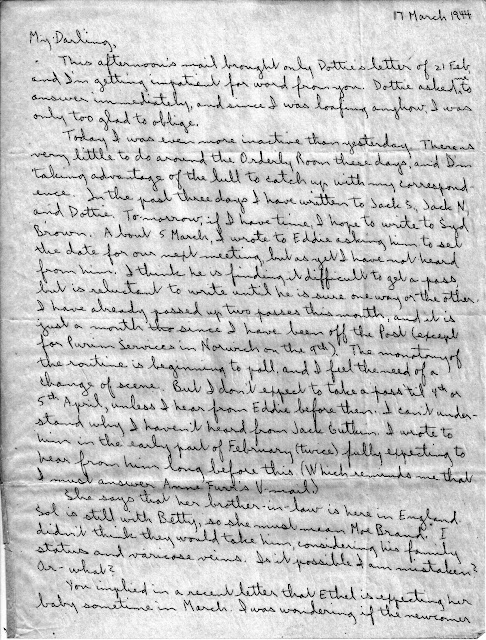 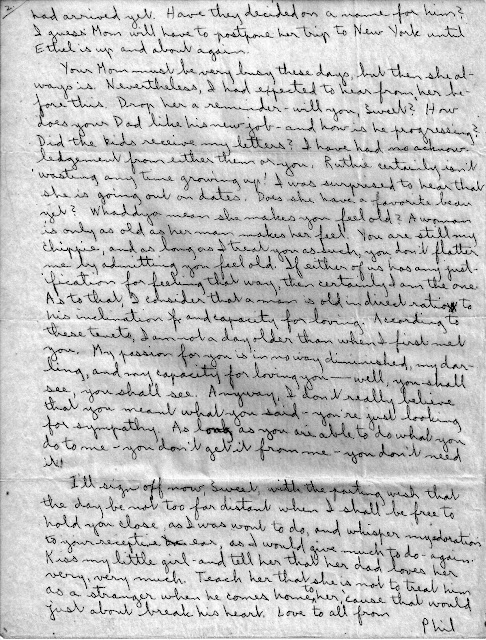 Yours of March 8 was the lone piece of mail I received today. What the devil is holding up that mail!! I am going to comment on some parts of your letter.

You asked why I failed to comment on your suggestion for a hat for my fur coat. I covered that little item a long time ago, if you will remember. I told you Gloria gave me a brown off-the-face fur trimmed hat that goes perfectly with my coat and that I had given up the idea of buying a hat this season. Furthermore, I don't have one large piece of fur to make a hat. I only have two small skeins of fur, enough to trim a hat. Hope that takes care of your inquiries. What's the use of my writing these things if you continually overlook them?

Then you say what do I mean by saying that we need to furnish a house. Well, is that all you think we need to furnish "our” house? Let's start with our bedroom. We need at least a dozen things in that room alone to make it complete, such as electric clock, picture frames, new perfume tray (the one you promised to buy me to replace the broken one) chaise lounge, vanity lamps, lamp shade covers, washable bedspread, radiator covers, miniature radio, etc. Then what about our daughter? Don't you think she'll be entitled to her own bedroom and bedroom set. Don't you want your chest of drawers for your own use? Our rugs are worn (badly) and we'll need new ones. Our entire kitchen needs refurnishing, linoleum, kitchen set (I want to return my mother's set as she has the other piece and it will finish off her kitchen), gas range (our present one isn't so hot) and we could use a refrigerator of late design. We also need a new set of curtains badly and a few good pots and pans. And what about the porch? or doesn't that count? And the bathroom needs a carpet of bright color, a new shower curtain and most of all - a good coat of paint. I've not mentioned the dining room, but I hate the present set and would like

to have my own set some day, if I have a dining room at all. The kitchen, too, is sorely in need of painting. This house has gotten so dirty and shabby that I doubt whether you would recognize it as far as paints are concerned. Now do I make myself clear? I forgot all about a radio-phonograph combination for the living room, plus all those accessories you mention.

I heard of that $4500 "bonus" but I find it difficult to count on any such predictions. Perhaps it will be so and if it is then I am only too willing to "tie up duplex apartments.” I've also thought a great deal of our going into a business for only in business do you really make money and live accordingly. There is not a person in this block that doesn't have his or her own business.

I forgot to tell you at Al is trying to get Harry into a station on his own or to aid him (Al). Harry is very, very secretive about his finances as well as his plans for the immediate future and all I know is what I happen to overhear. I've often wondered whether you would be interested in pooling with the Nerenbergs in a line of Photography since you do seem to have an interest in it. I remember Jack's once asking us whether we would lend him sufficient money to start anew after he had broken with his partner, saying he would make it up in a short time. Would you?

Before I forget it - I bought a playpen today. I was cleaning up the porch and happened to come across an ad in the Beacon, the local newspaper, which stated "almost new playpen - $7.50. I called and it was still for sale. The seller lives at 4901 N. Broad St., third floor, above the drugstore at Broad & Rockland. It is exactly like the former one, only in almost new condition. She gave it to me for $5 without å pad. I called a cab (Ruth was with me) and it cost me 50¢ more to get it home. Wonder of wonders Adele stayed in the pen most of the day, although she did cry when we put her in the second time. The first time she admired the new pen and wanted to be put in. Ethel has a pad she’ll lend me and I’ll probably give her the pen after I finish with it this fall. My dad will have to nail an extra board under the floor for extra support as Adele's weight has a sagging tendency on the middle of the floor. The floor is heavy compoboard (spelling???) and has hinges on the sides that permit the floor to be folded against the sides. There goes my $5 birthday gift.

That hichair my mother promised me is only 25 years old. It's very old fashioned, but sturdily built. I won't need it for more than three months after Ethel takes hers, so I guess it will have to do. It wouldn't pay to buy a hichair now. We'll buy everything modern and new for the next one, won't we, sweet? We'll have to, or else no dice.

Just learned that Ben is also on New Guinea. I wonder if he'll meet up with Jack?

Goldie's father sent her a $10 check for her birthday. He also had a lovely all leather handbag made up special for her by someone in Poughkeepsie that manufactures handbags. A handbag of that type would cost her about $15 if she would purchase it at retail price here in Philly.

Snuffy is in the Navy - passed today. He will leave about April 7. Dot and he are going to New York to make the most of their last days together. Just room to send all my love and adoration to my adored Phil.

This afternoon's mail brough only Dottie's letter of 21 Feb. and I'm getting impatient for word from you. Dottie asked me to answer immediately and since I was loafing anyhow, I was only too glad to oblige.

Today I was even more inactive than yesterday. There is very little to do around the Orderly Room these days, and I was taking advantage of the lull to catch up with my correspondence. In the past three days I have written to Jack S. Jack N., and Dottie. Tomorrow, if I have time, I hope to write to Syd Brown. About 5 March, I wrote to Eddie, asking him to set the date for our next meeting, but as yet I have not heard from him. I think he is finding it difficult to get a pass, but is reluctant to write until he is sure one way or the other. I have already passed up two passes this month and it is just a month since I have been off the Post (except for Purim services in Norwich on the 9th). The monotony of the routine is beginning to pall, and I feel the need of a change of scene. But I don't expect to take a pass ’til 4th or 5th April, unless I hear from Eddie before then. I can't understand why I haven't heard from Jack Gutkin. I wrote to him in the early part of February (twice) fully expecting to hear from him long before this. ((Which reminds me that I must answer Anne Furr’s V-mail.)

She says that her brother-in-law is here in England. Sol is still with Betty, so she must mean Moe Brand. I didn't think they would take him, considering his family status and varicose veins. Is it possible I am mistaken? Or - what?

You implied in a recent letter that Ethel is expecting her baby sometime in March. I was wondering if the newcomer had arrived yet. Have they decided on a name for him? I guess Mom will have to postpone her trip to New York until Ethel is up and about again.

Your Mom must be very busy these days, but then she always is. Nevertheless, I had expected to hear from her before this. Drop her reminder - will you, Sweet? How does your Dad like his new job and how is he progressing? Did the kids receive my letters? I have had no acknowledgement from either them or you. Ruthie certainly isn't wasting any time growing up! I was surprised to hear that she is going out on dates. Does she have a favorite beau yet? Whaddya mean she makes you feel old? A woman is only as old as her man makes her feel. You are still my Chippie and as long as I treat you as such you don't flatter me by admitting you feel old. If either of us has any justification for feeling that way, then certainly I am the one. As to that, I consider that a man is old in direct ratio to his inclination and capacity for loving. According to these tenets, I am not a day older than when I first met you. My passion for you is in no way diminished, my darling, and my capacity for loving you—well, you shall see, you shall see. Anyway, I don't really believe that you meant what you said—you're just looking for sympathy. As long as you are able to do what you do to me—you don't get it from me—you don't need it!

I'll sign off now, Sweet, with the parting wish that the day be not too far distant when I shall be free to hold you close as I was wont to do, and whisper my adoration to your receptive ear, as I would give much to do—again. Kiss my little girl—and tell her that her dad loves her very, very much. Teach her that she is not to treat him as a stranger when he comes home to her, ’cause that would just about break his heart. Love to all from

Posted by Marilyn at 8:07 AM No comments: