Post #628 - April 12, 1945 Harry W. Thinks You are Mad at Him or That He Didn't Treat You Right When You Visited Him and Here on the Eve of Victory, After Doing So Much to Make It Possible, Our Great President has Passed Away 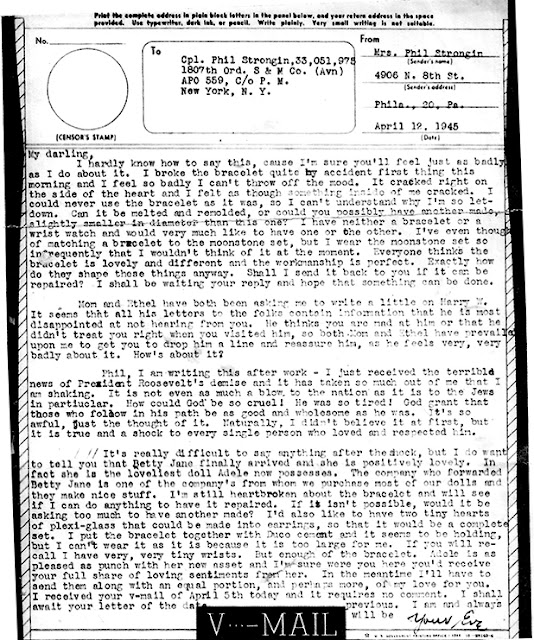 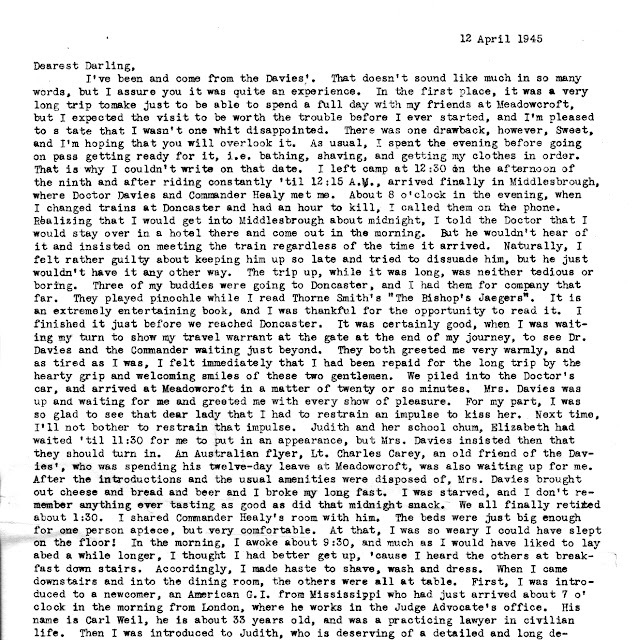 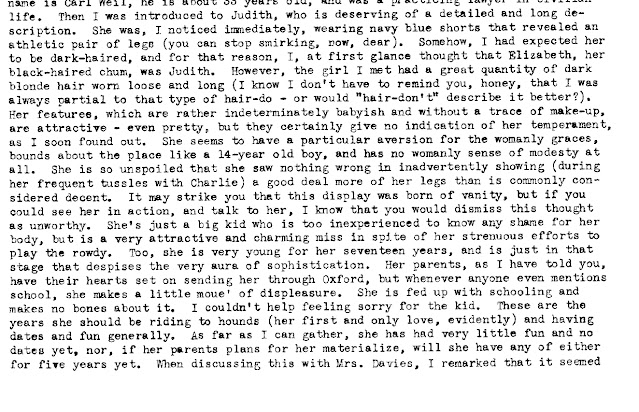 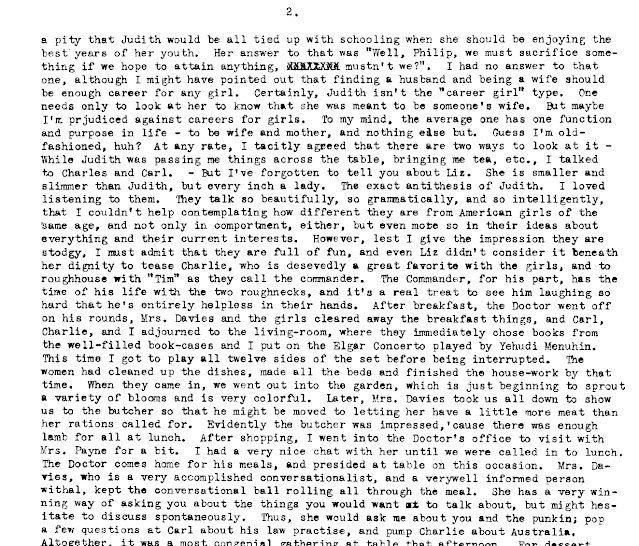 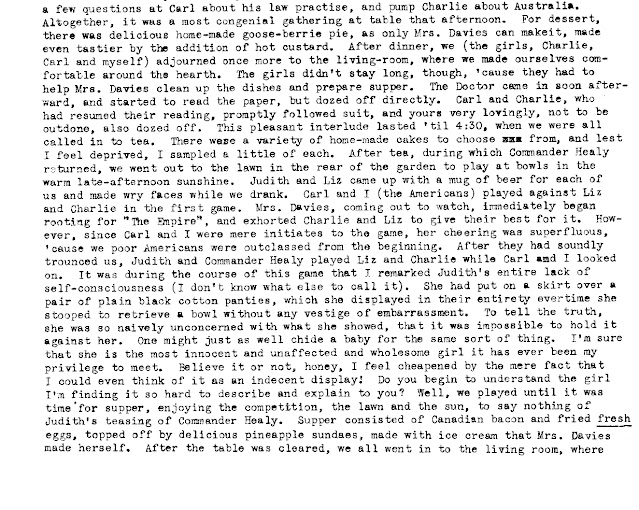 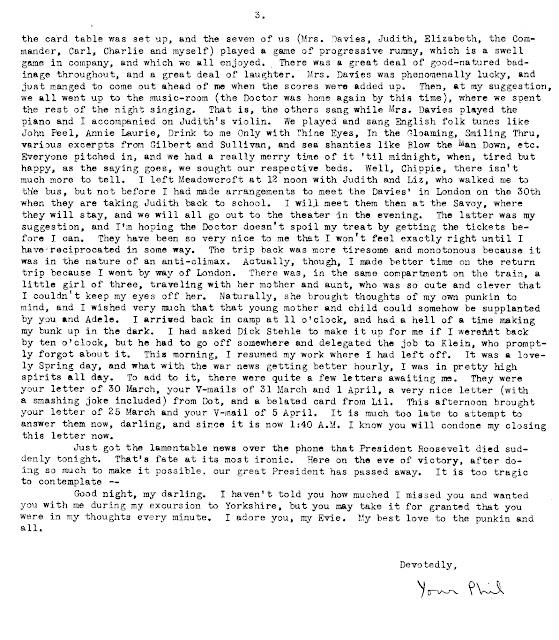 I hardly know how to say this, cause I'm sure you'll feel just as badly as I do about it. I broke the bracelet quite by accident first thing this I morning and I feel so badly I can't throw off the mood. It cracked right on the side of the heart and I felt as though something inside of me cracked. I could never use the bracelet as it was, so I can't understand why I'm so let down. Can it be melted and remolded, or could you possibly have another made slightly smaller in diameter than this one? I have neither a bracelet or a wrist watch and would very much like to have one or the other. I've even thought of matching a bracelet to the moonstone set, but I wear the moonstone set so infrequently that I wouldn't think of it at the moment. Everyone thinks the bracelet is lovely and different and the workmanship is perfect. Exactly how do they shape these things anyway. Shall I send it back to you if it can be repaired! I shall be waiting your reply and hope that something can be done.

Mom and Ethel have both been asking me to write a little on Harry W. It seems that all his letters to the folks contain information that he is most disappointed at not hearing from you. He thinks you are mad at him or that he didn't treat you right when you visited him, so both Mom and Ethel have prevailed upon me to get you to drop him a line and reassure him, as he feels very, very badly about it. How's about it?

Phil, I am writing this after work - I just received the terrible news of President Roosevelt's demise and it has taken so much out of me that I am shaking. It is not even as much a blow to the nation as it is to the Jews in particular. How could God be so cruel! He was so tired! God grant that those who follow in his path be as good and wholesome as he was. It's so awful, just the thought of it. Naturally, I didn't believe it at first, but it is true and a shock to every single person who loved and respected him.

It's really difficult to say anything after the shock, but I do want to tell you that Betty Jane finally arrived and she is positively lovely. In fact she is the loveliest doll Adele now possesses. The company who forwarded Betty Jane is one of the company's from whom we purchase most of our dolls and they make nice stuff. I'm still heartbroken about the bracelet and will see If I can do anything to have it repaired. If it isn't possible, would it be asking too much to have another made? I'd also like to have two tiny hearts of plexi-glass that could be made into earrings, so that it would be a complete set. I put the bracelet together with Duco cement and it seems to be holding, but I can't wear it as it is because it is too large for me. If you will recall I have very, very tiny wrists. But enough of the bracelet. Adele is as pleased as punch with her new asset and I'm sure were you here you'd receive your full share of loving sentiments from her. In the meantime I'll have to send them along with an equal portion, and perhaps more, of my love for you. I received your v-mall of April 5th today and it requires no comment. I shall await your letter of the date previous. I am and always will be
Your Eve
12 April 1945

Just got the lamentable news over the phone that President Roosevelt died suddenly tonight. That's fate at its most ironic. Here on the eve of victory, after doing so much to make it possible, our great President has passed away. It is too tragic to contemplate --

Good night, my darling. I haven't told you how muched I missed you and wanted you with me during my excursion to Yorkshire, but you may take it for granted that you were in my thoughts every minute. I adore you, my Evie. My best love to the punkin and all.

Devotedly,
Your Phil
Posted by Marilyn at 5:49 PM No comments: