Post #392 - June 14, 1944 Goldie Went to the Hospital at 1 A.M. this Morning and Diana was Born at About 9 and Fifty Years from Now, or a Hundred, Darling, that Profession of Love will be Every Bit as Earnest and Heartfelt as it was Yesterday and is Today 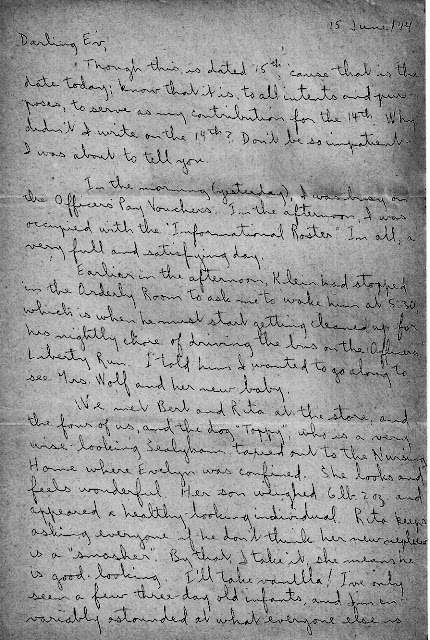 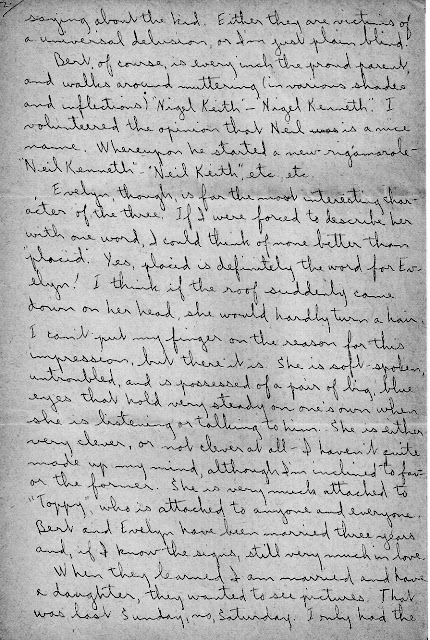 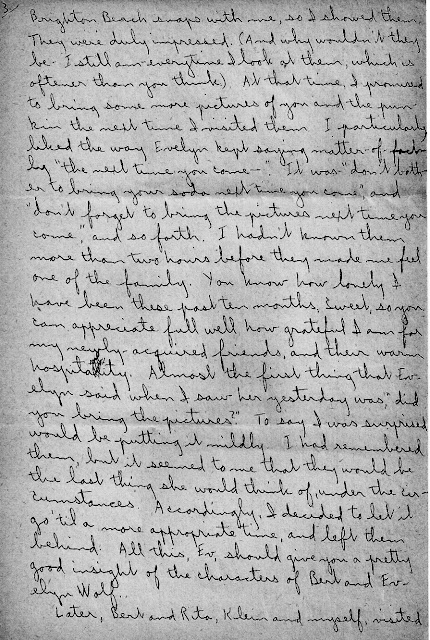 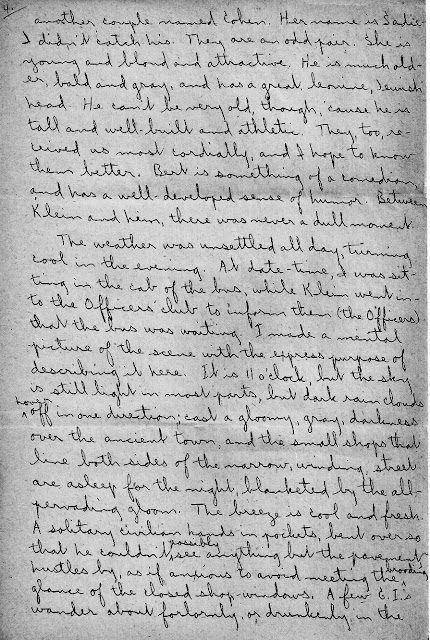 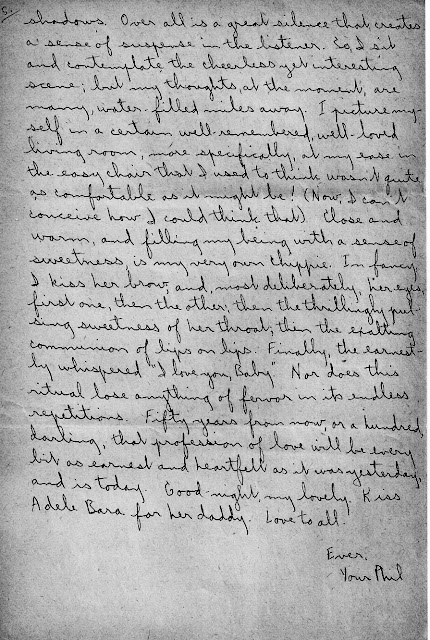 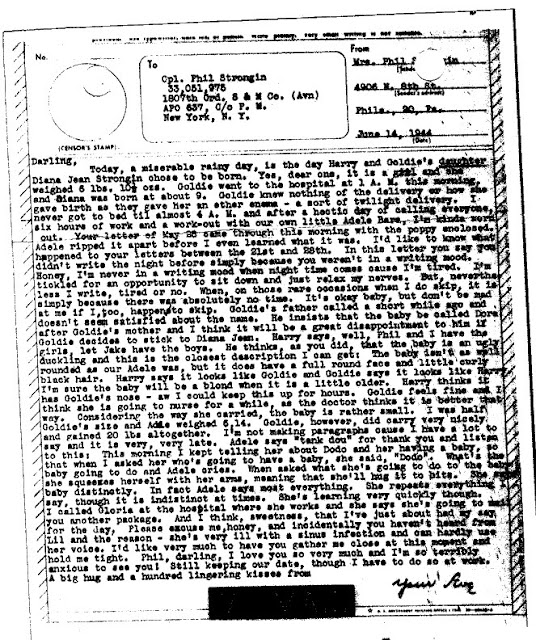 June 14, 1944
Darling,
Today, a miserable rainy day, is the day Harry and Goldie's daughter Diana Jean Strongin chose to be born. Yes, dear one, it is a girl and she weighed 6 lbs. 10-1/2 ozs. Goldie went to the hospital at 1 A.M. this morning and Diana was born at about 9. Goldie knew nothing of the delivery or how she gave birth as they gave her an ether enema—a sort of twilight delivery. I never got to bed til almost 4 A.M. and after a hectic day of calling everyone, six hours of work, and a workout with our own little Adele Bara, I'm kinda worn out. Your letter of May 28 came through this morning with the poppy enclosed. Adele ripped it apart before I even learned what it was. I'd like to know what happened to your letters between the 21st and 28th. In this letter you say you didn't write the night before, simply because you weren’t in a writing mood. Honey, I'm never in a writing mood when night time comes 'cause I'm tired. I'm tickled for an opportunity to sit down and just relax my nerves. But, nevertheless, I write, tired or no. When, on those rare occasions when I do skip, it is simply because there was absolutely no time. It's okay, baby, but don't be mad at me if I to happen to skip. Goldie's father called a short while ago and doesn't seem satisfied about the name. He insisted the baby be called Dora after Goldie's mother, and I think it will be a great disappointment to him if Goldie decides to stick to Diana Jean. Harry says, well, Phil and I have the girls, let Jake have the boys. He thinks, as you did, that the baby is an ugly duckling and this is the closest description I can get: The baby isn't as well rounded as our Adele was, but it does have a full round face and little curly black hair. Harry says it looks like Goldie and Goldie says it looks like Harry. I'm sure the baby will be a blonde when it is a little older. Harry thinks it has Goldie's nose—aw I could keep this up for hours. Goldie feels fine and I think she is going to nurse for a while as the doctor thinks it is better that way. Considering the way she carried, the baby is rather small. I was half Goldie’s size and Adele weighed 6.14. Goldie, however, did carry very nicely and gained 20 lbs. altogether. I'm not making paragraphs 'cause I have a lot to say and it is very, very late. Adele says “tank dou” for thank you and listen to this: This morning, I kept telling her about Dodo and her having a baby, so that when I asked her who's going to have a baby, she said “Dodo.” What's the baby going to do and Adele cries. When asked what she's going to do to the baby, she squeezes herself with her arms, meaning that she'll hug it to bits. She said “baby” distinctly. In fact, Adele says most everything. She repeats everything I say, though it is indistinctive times. She's learning very quickly though. I called Gloria at the hospital where she works and she says she's going to mail you another package. And I think, sweetness, that I've just about had my say for the day. Please excuse me, honey, and incidentally you haven't heard from Lil and the reason—she's very ill with a sinus infection and can hardly use her voice. I'd like very much to have you gather me close at this moment and hold me tight. Phil, darling, I love you so very much and I'm so terribly anxious to see you. Still keeping our date, though I have to do so at work. A big hug and a hundred lingering kisses from
Your Eve

Though this is dated 15th, ’cause that is the date today; know that it is to all intents and purposes, to serve as my contribution for the 14th. Why didn't I write on the 14th? Don't be so impatient—I was about to tell you.

In the morning (yesterday), I was busy on the Officers Pay Vouchers. In the afternoon, it was occupied with the “Informational Roster”. In all, a very full and satisfying day.

Earlier in the afternoon, Klein had stopped in the Orderly Room to ask me to wake him at 5:30, which is when he must start getting cleaned up for his nightly chore of driving the bus on the Officers Liberty Run. I told him I wanted to go along to see Mrs. Wolf and her new baby.

We met Bert and Rita at the store, and the four of us, and the dog "Toppy", who is a very wise-looking Sealyham, taxied out to the Nursing Home where Evelyn was confined. She looks and feels wonderful. Her son weighed 6 lb. 2 oz. and appeared a healthy-looking individual. Rita keeps asking everyone if he don't think her new nephew is a "smasher". By that, I take it, she means he is good looking. I'll take vanilla! I’ve only seen a few three-day old infants, and I’m invariably astounded at what everyone else is saying about the kid. Either they are victims of a universal delusion, or I’m just plain blind!

Bert, of course, is every inch the proud parent, and walks around muttering (in various shades and inflections) "Nigel Keith - "Nigel Kenneth.” I volunteered the opinion that Neil was is a nice name. Whereupon he started a new rigamarole "Neil Kenneth" - Neil Keith", etc., etc.

Evelyn, though, is far the most interesting character of the three. If I were forced to describe her with one word, I could think of none better than “placid.” Yes, placid is definitely the word for Evelyn! I think if the roof suddenly come down on her head, she would hardly turn a hair. I can’t put my finger on the reason for this impression, but there it is. She is soft-spoken, untroubled, and is possessed of a pair of big, blue eyes that hold very steady on one's own when she is listening or talking to him. She is either very clever, or not clever at all—I haven't quite made up my mind, although I'm inclined to favor the former. She is very much attached to "Toppy,” who is attached to anyone and everyone. Bert and Evelyn have been married three years and, if I know the signs, still very much in love.

When they learned I am married and have a daughter, they wanted to see pictures. That was last Sunday, no, Saturday. I only had the Brighton Beach snaps with me, so I showed them. They were duly impressed. (And why wouldn’t they be—I still am every time I look at them, which is oftener than you think). At that time, I promised to bring some more pictures of you and the punkin the next time I visited them. I particularly liked the way Evelyn kept saying matter-of-factly “the next time you come". It was "don't bother to bring your soda next time you come,” and don't forget to bring the pictures next time you come, and so forth. I hadn’t known them more than two hours before they made me feel one of the family. You know how lonely I have been these past ten months, Sweet, so you can appreciate full well how grateful I am for my newly acquired friends, and their warm hospitality. Almost the first thing that Evelyn said when I saw her yesterday was, “did you bring the pictures?" To say I was surprised would be putting it mildly. I had remembered them, but it seemed to me that they would be the last thing she would think of under the circumstances. Accordingly, I decided to let it go 'til a more appropriate time, and left them behind. All this, Ev, should give you a pretty good insight of the characters of Bert and Evelyn Wolf.

Later, Bert and Rita, Klein and myself, visited another couple named Cohen. Her name is Sadie. I didn't catch his. They are an odd pair. She is young and blond and attractive. He is much older, bald and gray, and has a great leonine, Jewish head. He can’t be very old, though, ’cause he is tall and well-built and athletic. They, too, received us most cordially, and I hope to know them better. Bert is something of a comedian, and has a well-developed sense of humor. Between Klein and him, there was never a dull moment.

The weather was unsettled all day, turning cool in the evening. At date time, I was sitting in the cab of the bus, while Klein went into the Officers’ club to inform them (the Officers) that the bus was waiting. I made a mental picture of the scene with the express purpose of describing it here. It is 11 o’clock, but the sky is still light in most parts, but dark rain clouds hover off in one direction; cast a gloomy, gray, darkness over the ancient town, and the small shops that line both sides of the narrow, winding, street are asleep for the night, blanketed by the all-pervading gloom. The breeze is cool and fresh. A solitary civilian, hands in pockets, bent over so that he couldn’t possibly see anything but the pavement hustles by, as if anxious to avoid meeting the brooding glance of the closed shop-windows. A few G.I.'s wander about forlornly, or drunkenly in the shadows. Over all is a great silence that creates a sense of suspense in the listener. So, I sit and contemplate the cheerless yet interesting scene; but my thoughts, at the moment, are many, water-filled miles away. I picture myself in a certain well-remembered, well-loved living room, more specifically, at my ease in the cosy chair that I used to think wasn’t quite as comfortable as it might be! (Now, I can’t conceive how I could think that). Close and warm, and filling my being with a sense of sweetness, is my very own Chippie. In fancy, I kiss her brow and, most deliberately, her eyes, first one, then the other; then the thrilling pulsating sweetness of her throat; then the exalting communion of lips on lips. Finally, the earnestly whispered “I love you, Baby.” Nor does this ritual lose anything of fervor in its endless repetitions. Fifty years from now, or a hundred, darling, that profession of love will be every bit as earnest and heartfelt as it was yesterday, and is today. Good-night, my lovely. Kiss Adele Bara for her daddy. Love to all!

Ever,
Your Phil
Posted by Marilyn at 9:33 AM No comments: