Post #450 - September 7, 1944 Tonight My Mother and Her Brothers are having a Consultation About the Affairs of My Grandmother and Playing with the Idea of Spending My Leave in London, Now that the Black-Out is Being Lifted 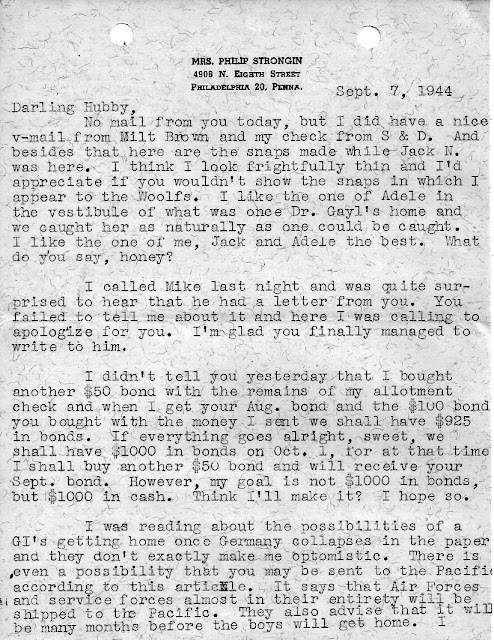 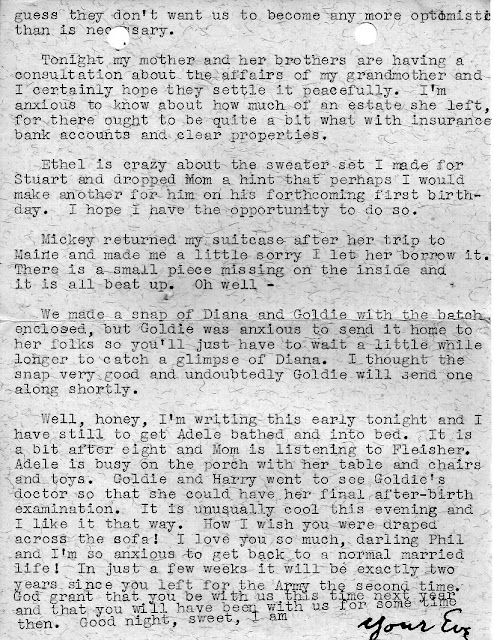 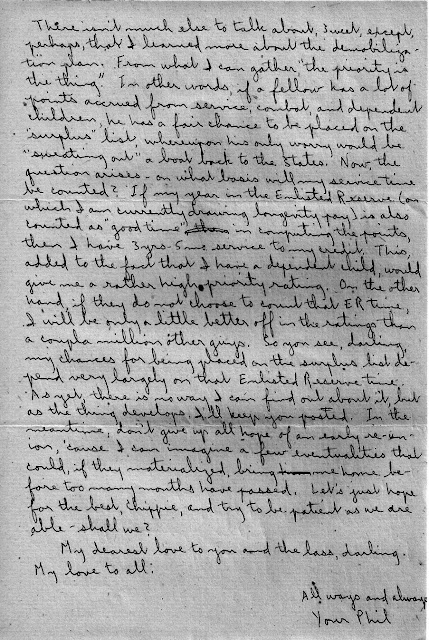 No mail from you today, but I did have a nice v-mail from Milt Brown and my check from S & D. And besides that here are the snaps made while Jack N. was here, I think I look frightfully thin and I'd appreciate if you wouldn't show the snaps in which I appear to the Woolfs, I like the one of Adele in the vestibule of what was once Dr. Gayl's home and we caught her as naturally as one could be caught. I like the one of me, Jack and Adele the best. What do you say, honey?

I called Mike last night and was quite surprised to hear that he had a letter from you. You failed to tell me about it and here I was calling to apologize for you. I'm glad you finally managed to write to him.

I didn't tell you yesterday that I bought another $50 bond with the remains of my allotment check and when I get your Aug. bond and the $100 bond you bought with the money I sent we shall have $925 in bonds. If everything goes alright, sweet, we shall have $1000 in bonds on Oct. 1, for at that time I shall buy another $50 bond and will receive your Sept. bond. However, my goal is not $1000 in bonds, but $1000 in cash. Think I'll make it? I hope so.

I was reading about the possibilities of a GI's getting home once Germany collapses in the paper and they don't exactly make me optimistic. There is even a possibility that you may be sent to the Pacific according to this article. It says that Air Forces and service forces almost in their entirety will be shipped to the Pacific. They also advise that it will be many months before the boys will get home. Guess they don't want us to become any more optimistic than is necessary.

Tonight my mother and her brothers are having a consultation about the affairs of my grandmother and I certainly hope they settle it peacefully. I'm anxious to know about how much of an estate she left, for there ought to be quite a bit what with insurance bank accounts and clear properties.

Ethel is crazy about the sweater-set I made for Stuart and dropped Mom a hint that perhaps I would make another for him on his forthcoming first birthday. I hope I have the opportunity to do so.

Mickey returned my suitcase after her trip to Maine and made me a little sorry I let her borrow it. There is a small piece missing on the inside and it is all beat up. Oh well -

We made a snap of Diana and Goldie with the batch enclosed, but Goldie was anxious to send it home to her folks so you'll just have to wait a little while longer to catch a glimpse of Diana. I thought the snap very good and undoubtedly Goldie will send one along shortly.

Well, honey, I’m writing this early tonight and I have still to get Adele bathed and into bed. It is a bit after eight and Mom is listening to Fleisher. Adele is busy on the porch with her table and chairs and toys. Goldie and Harry went to see Goldie's doctor so that she could have her final after-birth examination. It is unusually cool this evening and I like it that way. How I wish you were draped across the sofa! I love you so much, darling Phil and I'm so anxious to get back to a normal married life! In just a few weeks it will be exactly two years since you left for the Army the second time. God grant that you be with us this time next year and that you will have been with us for some time then. Good night, sweet, I am

No mail again today. It rained most of the day, and I got soaked walking to lunch. I spent most of the afternoon drying out by the stove in the Orderly Room. I'm pretty well caught up with my work now, but there are still a few things to be attended to before I get busy on the payrolls. I had meant to take advantage of the "breather" to take a pass, but Sgt. Murphy took off, so I couldn't. Guess the next chance I'll get will be about the 14th or 15th. If I could be sure that Ed would still be at the hospital, I would go out to see him again, but it would be just my luck to get there and find him gone. It is much too long and arduous a trip to warrant taking a chance on. I've been waiting for Harry W. to reply to my last letter asking him to tell me where I can meet him, but I have not heard from him as yet. So, when my next pass comes along, if I have not heard from him, I will probably spend it with Bert and Evelyn. By the way, Chippie, have you written to them yet? I have also been playing with the idea of spending my leave in London, now that the black-out is being lifted and the buzz-bombs have stopped coming over. But I won't go until you release me from my promise, Ev, so how's about it? Mickey Brown has asked me to meet him in Birmingham, but it is so far away that t'd have hardly any time with him before I had to start back.

There isn't much else to talk about, Sweet, except, perhaps, that I learned more about the demobilization plan. From what I can gather, “the priority is the thing.” In other words, it a fellow has a lot of points accrued from service, combat, and dependent children, he has a fair chance to be placed on the “surplus" list whereupon his only worry would be “sweating out” a boat back to the States. Now, the question arises - on what basis will my service time be counted? If my year in the Enlisted Reserve (on which I am currently drawing longevity pay) is also counted as "good time” in computing the points, then I have 3 yrs.-5 mos. service to my credit. This, added to the fact that I have a dependent child, would give me a rather high priority rating. On the other hand, if they do not choose to count that ER time, I will be only a little better off in the ratings than a coupla million other guys, so you see, darling, my chances for being placed on the surplus list depend very largely on that Enlisted Reserve time. As yet, there is no way I can find out about it, but as the thing develops, I’ll keep you posted. In the meantime, don't give up all hope of an early reunion, 'cause I can imagine a few eventualities that could, if they materialized, bring me home before too many months have passed. Let's just hope for the best, Chippie, and try to be patient as we are able—shall we?

My dearest love to you and the lass, darling. My love to all.

All ways and always,
Your Phil
Posted by Marilyn at 9:25 AM No comments: