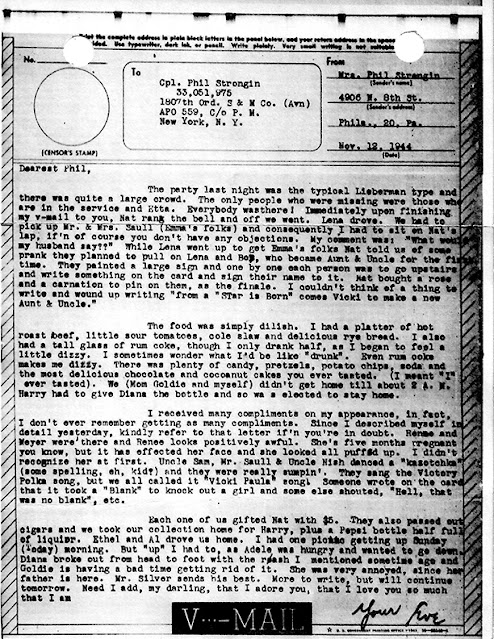 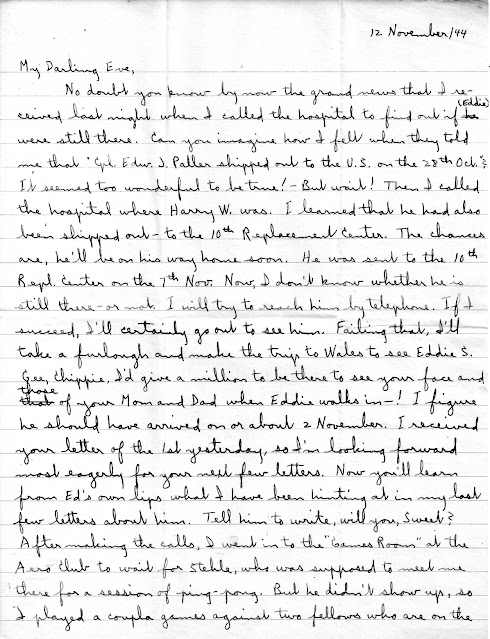 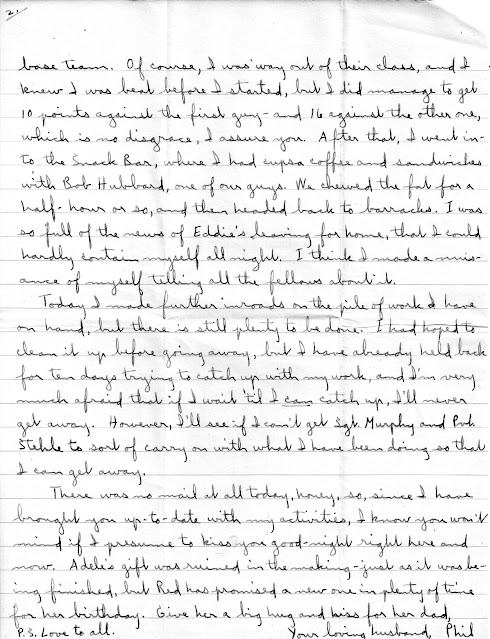 The party last night was the typical Lleberman type and there was quite a large crowd. The only people who were missing were those who are in the service and Etta. Everybody was there! Immediately upon finishing my v-mail to you, Nat rang the bell and off we went. Lena drove. We had to pick up Mr. & Mrs. SauII (Emma's folks) and consequently I had to sit on Nat’s lap, if’n of course you don't have any objections. My comment was: “What would my husband say??" While Lena went up to get Emma's folks Nat told us of some prank they planned to pull on Lena and Bob, who became Aunt & Uncle for the first time. They painted a large sign and one by one each person was to go upstairs and write something on the card and sign their name to it. Nat bought a rose and a carnation to pin on them, as the finale. I couldn't think of a thing write and wound up writing "from a ‘Star is Born’ comes Vioki to make a new Aunt & Uncle."

The food was simply dilish. I had a platter of hot roast beef, little sour tomatoes, coleslaw and delicious rye bread. I also had a tall glass of rum coke, though I only drank half, as I began to feel a little dizzy. I sometimes wonder what I'd be like "drunk". Even rum coke makes me dizzy. There was plenty of candy, pretzels, potato chips, soda and the most delicious chocolate and cocoanut cakes you over tasted. (I meant “I” ever tasted). We (Mom Goldie and myself) didn't get home till about 2 A.M. Harry had to give Diana the bottle and so was elected to stay home.

I received many compliments on my appearance, in fact, I don't ever remember getting as many compliments. Since I described myself in detail yesterday, kindly refer to that letter if’n you're in doubt. Renee and Meyer were there and Renee looks positively awful. She's five months pregnant you know, but it has affected her face and she looked all puffed up. I didn't recognize her at first. Uncle Sam, Mr. Saull & Uncle Nish danced a "kasatchka (some spelling, eh, kid?) and they were really sumpin'. They sang the Victory Polka song, but we all called it "Vicki Paula" song: Someone wrote on the card that it took a "Blank" to knock out a girl and some else shouted, *Hell, that was no blank", etc.

Each one of us gifted Nat with $5. They also passed out cigars and we took our collection home for Harry, plus a Pepsi bottle half full of liquier. Ethel and Al drove us home. I had one picnic getting up Sunday (Today) morning. But "up” I had to, as Adele was hungry and wanted to go down. Diana broke out from head to foot with the rash I mentioned sometime ago and Goldie is having a bad time getting rid of it. She was very annoyed, since her father is here. Mr. Silver sends his best. More to write, but will continuo tomorrow. Need I add, my darling, that I adore you, that I love you so much that I am

No doubt you know by now the grand news that I received last night when I called the hospital to find out if Eddie were still there. Can you imagine how I felt when they told me that "Cpl. Edw. J. Paller shipped out to the U.S. on the 28th Oct."? It seemed too wonderful to be true! - But wait! Then I called the hospital where Harry W. was. I learned that he had also been shipped out to the 10th Replacement Center. The chances are, he'll be on his way home soon. He was sent to the 10th Repl. Center on the 7th Nov. Now, I don't know whether he is still there or not. I will try to reach him by telephone. If I succeed, t'll certainly go out to see him. Failing that, I'll  take a furlough and make the trip to Wales to see Eddie S. Gee, Chippie, I'd give a million to be there to see your face and those of your Mom and Dad when Eddie walks in—! I figure he should have arrived on or about 2 November. I received your letter of the 1st yesterday, so I'm looking forward most eagerly for your next few letters. Now you'll learn from Ed's own lips what I have been hinting at in my last few letters about him. Tell him to write, will you, Sweet? After making the calls, I went into the “Games Room" at the Aero Club to wait for Stahle, who was supposed to meet me there for a session of ping-pong. But he didn't show up, so I played a couple games against two fellows who are on the base team. Of course, I was way out of their class, and I knew I was beat before I started, but I did manage to get 10 points against the first guy - and 16 against the other one, which is no disgrace, I assure you. After that, I went in to the Snack Bar, where I had cupsa coffee and sandwiches with Bob Hubbard, one of our guys. We chewed the fat for a half-hour or so, and then headed back to barracks. I was so full of the news of Eddie's leaving for home, that I could hardly contain myself all night. I think I made a nuisance of myself telling all the fellows about it.

Today I made further inroads on the pile of work I have on hand, but there is still plenty to be done. I had hoped to clean it up before going away, but I have already held back for ten days trying to catch up with my work, and I'm very much afraid that if I wait ’til I can catch up, I'll never get away. However, I'll see if I can't get Sgt. Murphy and Pvt. Stahle to sort of carry on with what I have been doing so that I can get away.

There was no mail at all today, honey, so, since I have brought you up-to-date with my activities, I know you won't mind if I presume to kiss you good-night right here and now. Adele's gift was ruined in the making - just as it was being finished, but Red has promised a new one in plenty of time for her birthday. Give her a big hung and kiss for her dad.
Your loving husband, Phil
P.S. Love to all.
Posted by Marilyn at 9:56 AM No comments: