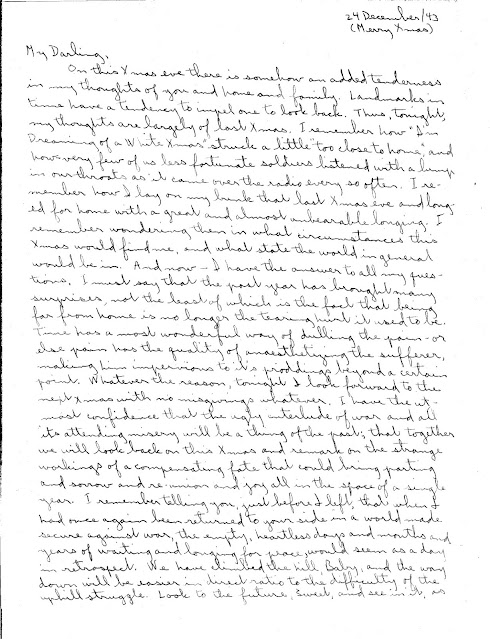 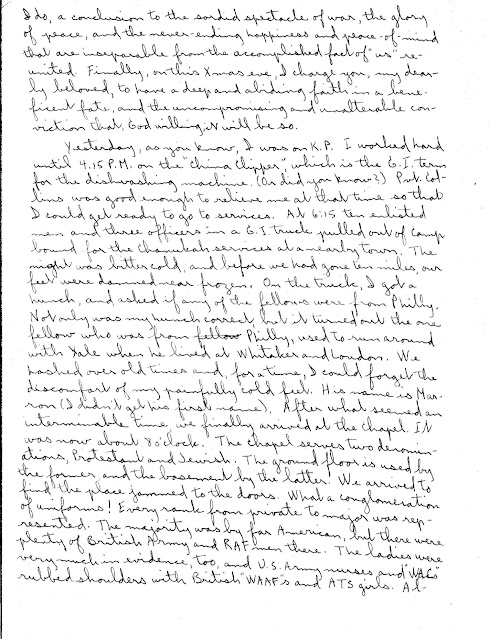 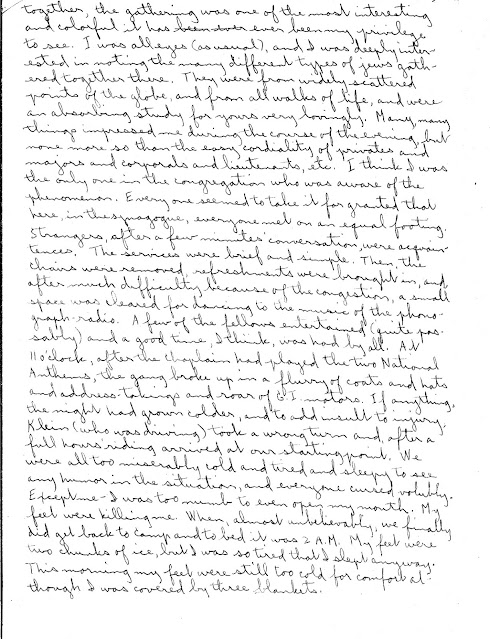 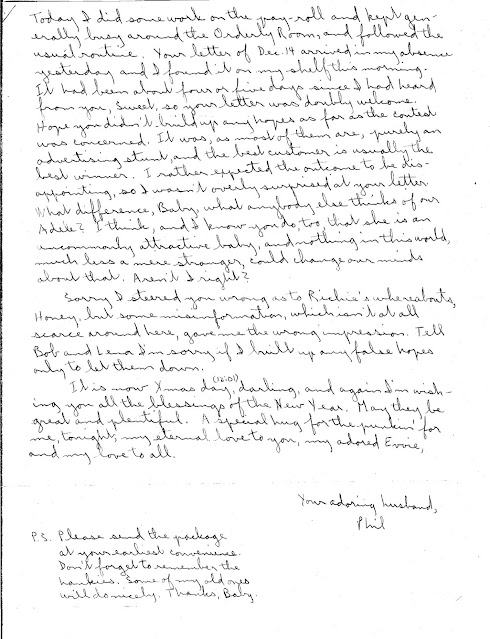 On this Xmas eve there is somehow an added tenderness in my thoughts of you and home and family. Landmarks in time have a tendency to impel one to look back. Thus, tonight, my thoughts are largely of last Xmas. I remember how “I'm Dreaming of a White Xmas” struck a little too close to home, and how very few of us less fortunate soldiers listened with a lump in our throats as it came over the radio every so often. I remember how I lay on my bunk that last Xmas eve and longed for home with a great and almost unbearable longing. I remember wondering then, in what circumstances this Xmas would find me, and what state the world in general would be in. And now—I have the answer to all my questions. I must say that the past year has brought many surprises, not the least of which is the fact that being far from home is no longer the tearing hurt it used to be. Time has the most wonderful way of dulling the pain—or else pain has the quality of anaesthetizing the sufferer, making him impervious to its proddings beyond a certain point. Whatever the reason, tonight I look forward to the next Xmas with no misgivings, whatever. I have the utmost confidence that the ugly interlude of war and all its attending misery will be a thing of the past; that together we will look back on this Xmas and remark on the strange workings of a compensating fate that could bring parting and sorrow and reunion and joy, all in the space of a single year. I remember telling you, just before I left, that when I had once again been returned to your side in a world made secure against war, the empty heartless days and months and years of waiting and longing for peace would seem as a day in retrospect. We have climbed the hill, Baby, and the way down will be easier in direct ratio to the difficulty of the uphill struggle. Look to the future, Sweet, and see it as I do, a conclusion to the sordid spectacle of war, the glory of peace, and the never-ending happiness and peace of mind that are inseparable from the accomplished fact of “us” reunited. Finally, on this Xmas eve I charge you, my dearly beloved, to have a deep and abiding faith in a beneficent fate, and the uncompromising and unalterable conviction that God willing, it will be so.

Yesterday, as you know I was on K.P. I worked hard until 4:15 P.M. on the “China Clipper” which is the G.I. term for the dishwashing machine. (Or did you know?) Pvt. Collins was good enough to relieve me at that time so that I could get ready to go to services. At 6:15 ten enlisted men and three officers in a G.I. truck pulled out of Camp bound for the Chanukah services at a nearby town. The night was bitter cold, and before we had gone ten miles, our feet were damn near frozen. On the truck, I got a hunch, and asked if any of the fellows were from Philly. Not only was my hunch correct, but it turned out the one fellow who was from Philly used to run around with Yale when he lived at Whitaker and Loudon. We hashed it over old times and, for a time, I could forget the discomfort of my painfully cold feet. His name is Marron. I didn't get his first name. After what seemed an interminable time, we finally arrived at the Chapel. It was now about 8 o'clock. The Chapel serves two denominations, Protestant and Jewish. The ground floor is used by the former and the basement by the latter. We arrived to find the place jammed to the doors. What a conglomeration of uniforms! Every rank from private to major was represented. The majority was by far American, but there were plenty of British Army and RAF men there. The ladies were very much in evidence, too, and U.S. Army nurses and “WACs” rubbed shoulders with British “WAAF”s and ATS girls. Altogether, the gathering was one of the most interesting and colorful it has ever been my privilege to see. I was all eyes (as usual), and I was deeply interested in noting the many different types of Jews gathered together there. They were from widely scattered points of the globe, and from all walks of life, and were an absorbing study for yours very lovingly. Many, many things impressed me during the course of the evening, but none more so than the easy cordiality of privates and majors and corporals and lieutenants, etc. I think I was the only one in the congregation who was aware of the phenomenon. Everyone seemed to take it for granted that here in the synagogue, everyone met on an equal footing. Strangers, after a few minutes’ conversation, were acquaintances. The services were brief and simple. Then the chairs were removed. Refreshments were brought in and after much difficulty because of the congestion, a small space was cleared for dancing to the music of the phonograph-radio. A few of the fellows entertained (quite passably) and a good time, I think, was had by all. At 11 o'clock, after the Chaplain had played the two National Anthems, the gang broke up in a flurry of coats and hats and address-takings and roar of GI Motors. If anything, the night had grown colder, and to add insult to injury, Klein, who was driving, took a wrong turn, and after a full hours’ riding, arrived at our starting point. We were all too miserably cold and tired and sleepy to see any humor in the situation, nd everyone cursed volubly. Except me—I was too numb to even open my mouth. My feet were killing me. When almost unbelievably we finally did get back to camp and to bed, it was 2 A.M. My feet were two chunks of ice, but I was so tired that I slept anyway. This morning my feet were still too cold for comfort, although I was covered by three blankets.

Today I did some work on the pay-roll and kept generally busy around the Orderly Room, and followed the usual routine. Your letter of Dec. 14 arrived in my absence yesterday and I found it on my shelf this morning. It had been about four or five days since I had heard from you, Sweet, so your letter was doubly welcome. Hope you didn't build up any hopes as far as the contest was concerned. It was, as most of them are, purely an advertising stunt, and the best customer is usually the best winner. I rather expected the outcome to be disappointing, so I wasn't overly surprised at your letter. What difference, Baby, what anyone else thinks of Adele? I think, and I know you do, too, that she is an uncommonly attractive baby, and nothing in this world, much less a mere stranger, could change our minds about that. Aren’t I right?

Sorry, I steered you wrong as to Richie's whereabouts, Honey, but some misinformation, which isn't at all scarce around here, gave me the wrong impression. Tell Bob and Lena I'm sorry if I built up any false hopes, only to let them down.

It is now Christmas Day (12:01), darling, and again, I'm wishing you all the blessings of the New Year. May they be great and plentiful. A special hug for the punkin’ for me, tonight, my eternal love to you my adored Evvie and my love to all.

P.S.  Please send the package as your earliest convenience. Don't forget to remember the hankies. Some of my old ones will do nicely. Thanks, Baby.