Post #260 - January 4, 1944 Seymour Called Us Long-Distance from California and When I Think How Eagerly I Looked for a Furlough in the States! 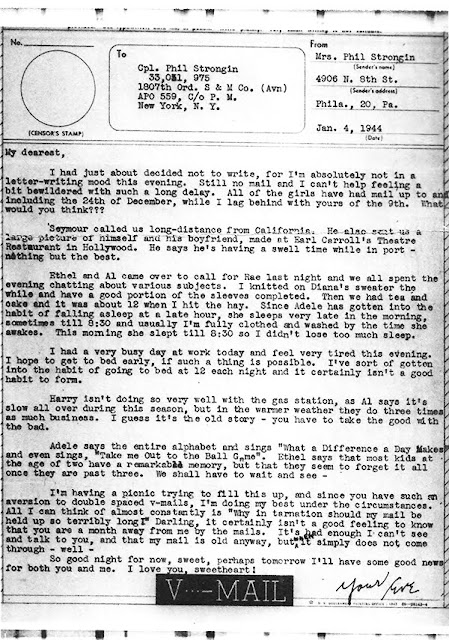 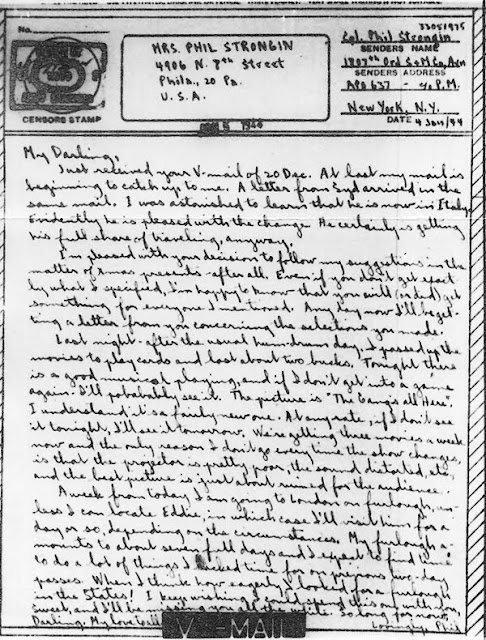 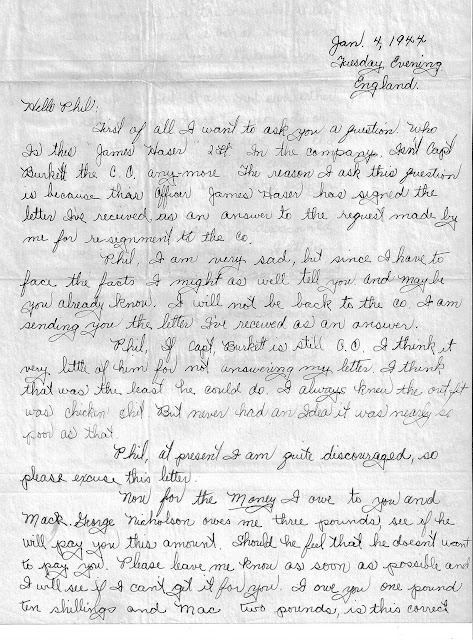 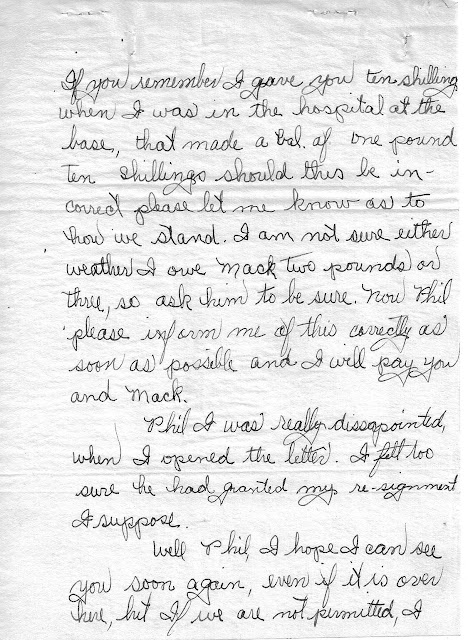 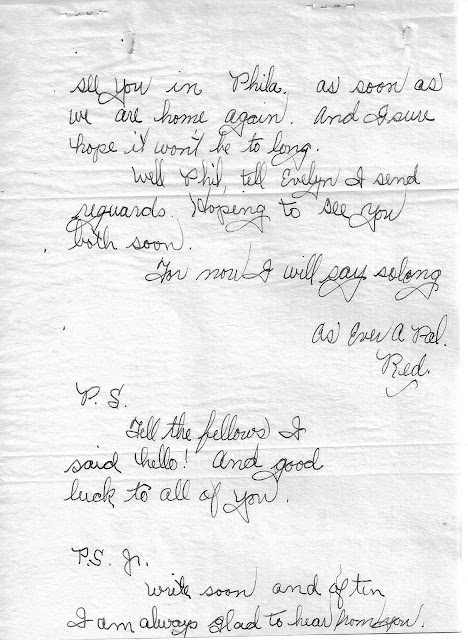 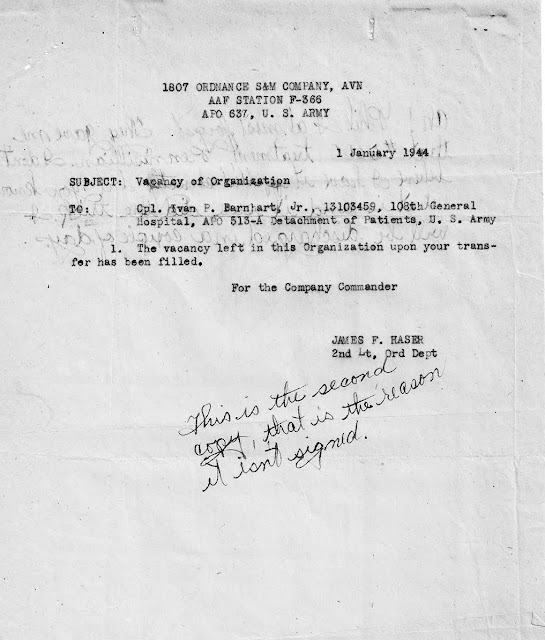 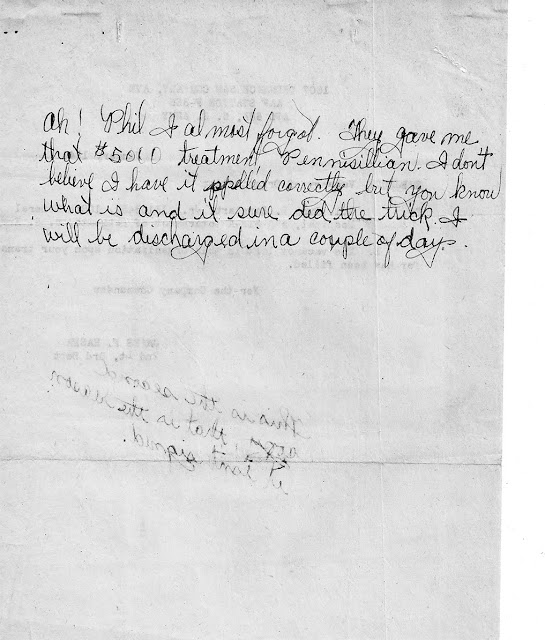 I had just about decided not to write, for I’m bsolutely not in a letter-writing mood this evening. Still no mail and I can't help feeling a bit bewildered with such a long delay. All of the girls have had mail up to an including the 24th of December, while I lagged behind with yours of the 9th. What would you think???

Seymour called us long distance from California. He also sent us a large picture of himself and his boyfriend made at Earl Caroll’s Theater Restaurant in Hollywood. He says he's having a swell time while in port—nothing but the best.

Ethel and Al came over to call for Rae last night, and we all spent the evening chatting about various subjects. I knitted on Diana's sweater the while and have a good portion of the sleeves completed. Then we had tea and cake and it was about 12 when I hit the hay. Since Adele has gotten into the habit of falling asleep at a late hour, she sleeps very late in the morning, sometimes till 8:30, and usually I'm fully clothed and washed by the time she awakes. This morning, she slept till 8:30 so I didn't lose too much sleep.

I had a very busy day at work today and feel very tired. I hope to get to bed early, if such a thing is possible. I've sort of gotten into the habit of going to bed at 12 each night, and it certainly isn't a good habit to form.

Harry isn't doing so very well with the gas station, as Al says it's slow all over during the season, but in the warmer weather they do three times as much business. I guess it's the old story—you have to take the good with the bad.

Adele says the entire alphabet and sings “What a Difference a Day Makes” and even sings “Take Me Out to the Ball Game.” Ethel says that most kids at the age of two have a remarkable memory, but they seem to forget it all once they're past three. We'll have to wait and see—

I'm having a picnic trying to fill this up, and since you have such an aversion to double spaced v-mails, I'm doing my best under the circumstances. All I can think of almost constantly is “Why in tarnation should my mail be held up so terribly long?” Darling, it certainly isn't a good feeling to know that you are a month away from me by the mails. It's bad enough I can't see and talk to you and that my mail is old anyway, but it simply does not come through—well—

So goodnight for now, sweet, perhaps tomorrow I'll have some good news for both you and me. I love you sweetheart!

Just received your email of 20th Dec. At last my mail is beginning to catch up to me. A letter from Syd arrived in the same mail. I was astonished to learn that he is now in Italy. Evidently he is pleased with the change. He certainly is getting his full share of traveling anyway,

I'm pleased with your decision to follow my suggestions in the matter of Xmas presents—after all. Even if you don't get exactly what I specified, I'm happy to know that you will or did get something for everyone I mentioned. Any day now I'll be getting a letter from you concerning the selections you made.

Last night, after the usual hum-drum day, I passed up the movies to play cards and lost about $2. Tonight there is a good musical playing, and if I don't get into a game again, I'll probably see it. The picture is “The Gangs All Here.” I understand it's a fairly new one. At any rate, if I don't see it tonight, I'll see it tomorrow. We're getting three movies a week now and the only reason I don't go every time the show changes is that the projector is pretty poor, the sound distorted, etc. and the best picture is just about ruined for the audience.

A week from today I am going to London on furlough, unless I can locate Eddie, in which case I’ll visit him for day or so, depending on circumstances. My furlough amounts to about seven full days, and I expect to find time to do a lot of things I lacked time for on previous two-day passes. When I think how eagerly I looked for a furlough in the states! I keep wishing I could spend this one with you, Sweet, and I'll be missing you all the while. So long for now, Darling. My love to all.

First of all, I wanted to ask you a question. Who is this James Haser, 2nd Lt. in the company? Isn't Captain Burkett the C.O. anymore? The reason I ask this question is because this Officer, James Haser has signed the letter I've received as an answer to the request made by me for re-assignment to the company.

Phil, I am very sad, but since I have to face the facts, I might as well tell you, and maybe you already know, I will not be back to the co. I'm sending you the letter I’ve received as an answer.

Phil, if Captain Burkett is still C.O., I think very little of him for not answering my letter. I think that was the least he could do. I always knew the outfit was chickenshit, but never had an idea it was nearly so poor as that.

Phil, at present I am quite discouraged, so please excuse this letter.

Now for the money I owe to you and Mack. George Nicholson owes me £3.00. See if he will pay you this amount. Should he feel that he doesn't want to pay you, please leave me know as soon as possible and I will see if I can't get it for you. I owe you £1.10 shillings and Mack 2 pounds, is this correct? If you remember, I gave you 10 shillings when I was in the hospital at the base, that made a balance of £1.10 shillings. Should this be incorrect, please let me know as to how we stand. I'm not sure either whether I owe Mack two pounds or three, so ask him to be sure. Now Phil, please inform me of this correctly as soon as possible and I will pay you and Mack.

Phil I was really disappointed when I opened the letter. I felt too sure he had granted my re-assignment, I suppose.

Well, Phil, I hope I can see you soon again, even if it is over here, but if we are not permitted, I'll see you in Phila. as soon as we're home again, and I sure hope it won't be too long. Well, Phil, tell Evelyn I send regards. Hoping to see you both soon.

For now I will say so long.
As Ever a Pal.
Red

P.S. Tell the fellows I said hello! And good luck to all of you.

P.S. Jr. Write soon and often. I am always glad to hear from you.