Post #262 - January 6, 1944 Your V-Mail Explained the Delay in Your Mail and It Isn’t Permitted Us to Use Regular Mails 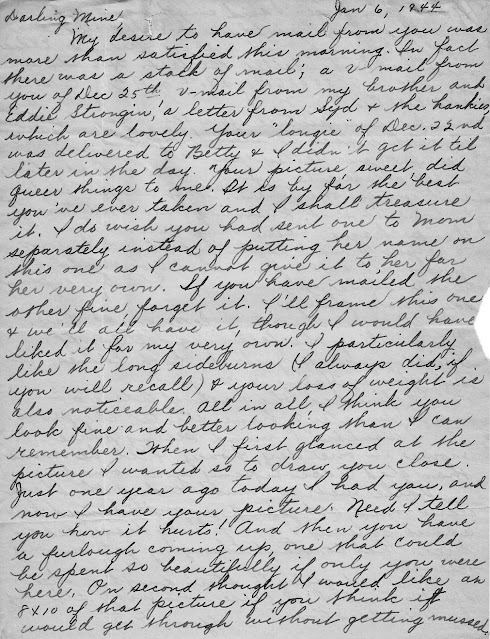 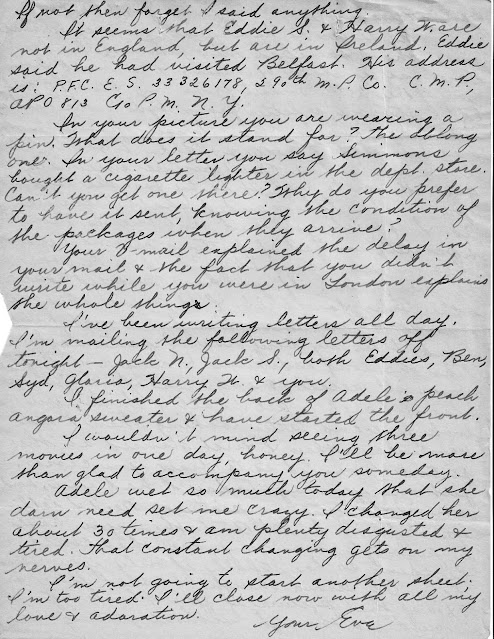 The following V-mail was misfiled and consequently was added in
and updated at a later date: 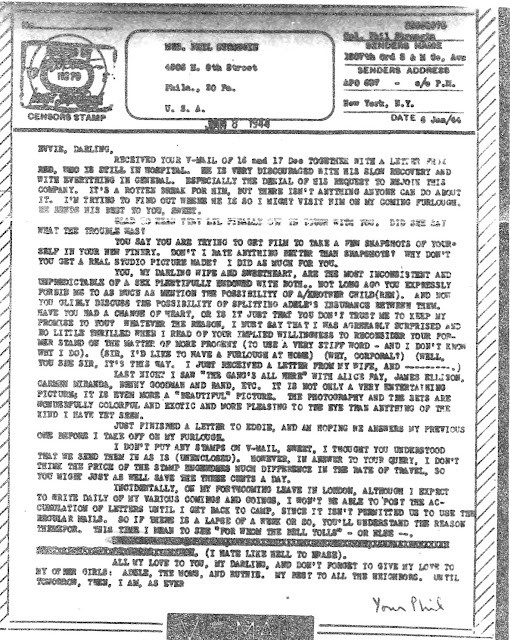 My desire to have mail from you was more than satisfied this morning. In fact, there was a stack of mail; a v-mail from you of Dec. 25th, v-mail from my brother and Eddie Strongin’s letter from Syd and the hankies, which are lovely. Your “longie” of Dec. 22nd, was delivered to Betty and I didn't get it til later in the day. Your picture, sweet, did queer things to me. It is by far the best you've ever taken, and I shall treasure it. I do wish you had sent one to Mom separately instead of putting her name on this one, as I cannot give it to her for her very own. If you have mailed the other five, forget it. I'll frame this one and we'll all have it, though I would have liked it for my very own. I particularly like the long sideburns (I always did, i you will recall) and your loss of weight is also noticeable. All in all, I think you look fine and better looking than I can remember. When I first glanced at the picture I wanted so to draw you close. Just one year ago today I had you, and now I have your picture. Need I tell you how it hurts! And then you have a furlough coming up, one that could be spent so beautifully, if only you were here. On second thought, I would like an 8 x 10 of that picture if you think it would get through without getting mussed. if not then forget I said anything.

In your picture, you are wearing a pin. What does it stand for? The oblong one. In your letter, you say Simmons bought a cigarette lighter at the dept. store. Can't you get one there? Why do you prefer to have it sent, knowing the condition of the packages when they arrive?

Your V-mail explained the delay in your mail and the fact that you didn't write while you were in London explains the whole thing. I've been writing letters all day. I'm mailing the following letters off tonight—Jack N., Jack S., both Eddies, Ben, Syd, Gloria, Harry W. and you. I finished the back of Adele's peach angora sweater and have started the front. I wouldn't mind seeing three movies in one day, honey. I'll be more than glad to accompany you someday.

Adele wet so much today that she damn needs set me crazy. I changed her about 30 times and am plenty disgusted and tired. That constant changing gets on my nerves. I'm not going to start another sheet; I'm too tired. I'll close now with all my love and adoration.

Received your V-mail of 16 and 17 Dec. together with a letter from Red, who is still in hospital. He is very discouraged with his slow recovery and with everything in general. Especially the denial of his request to rejoin this company. It’s a rotten break for him, but there isn’t anything anyone can do about it. I’m trying to find out where he is so I might visit him on my coming furlough. He sends his best to you, Sweet.
Glad to hear that Lil finally got in touch with you. Did she say what the trouble was?
You say you are trying to get film to take a few snapshots of yourself in your new finery. Don’t I rate anything better than snapshots? Why don’t you get a real studio picture made? I did as much for you.
You, my darling wife and sweetheart, are the most inconsistent and unpredictable of a sex plentifully endowed with both. Not long ago you expressly forbid me to as much as mention the possibility of another child(ren). And now you glibly discuss the possibility of splitting Adele’s insurance between them. Have you had a change of heart, or is it just that you don’t trust me to keep my promise to you? Whatever the reason, I must say that I was agreeably surprised and no little thrilled when I read of your implied willingness to reconsider your former stand on the matter of more progeny (to use a very stiff word—and I don’t know why I do). (Sir, I’d like to have a furlough at home) (Why, Corporal?) (Well, you see, sir, it’s this way. I just received a letter from my wife, and ---------.)
Last night I saw “The Gang’s All Here” with Alice Fay, James Ellison, Carmen Miranda, Benny Goodman and Band, etc. It is not only a very entertaining picture, it is even more a “beautiful” picture. The photography and the sets are wonderfully colorful and exotic and more pleasing to the eye than anything of the kind I have yet seen.
Just finished a letter to Eddie, and am hoping he answers my previous one before I take off on my furlough.
I don’t put any stamps on V-mail, Sweet. I thought you understood that we send them in as is (unenclosed). However, in answer to your query, I don’t think the price of the stamp engenders much difference in the date of travel, so you might just as well save the three cents a day.
Incidentally, on my forthcoming leave in London, although I expect to write daily of my various comings and goings, I won’t be able to post the accumulation of letters until I get back to camp, since it isn’t permitted us to use the regular mails. So if there is a lapse of a week or so, you’ll understand the reason therefor. This time I mean to see “For Whom the Bell Tolls”—or else—.
Two lines blacked out. (I hate like hell to erase).
All my love to you, my darling, and don’t forget to give my love to my other girls: Adele, the Moms, and Ruthie. My best to all the neighbors. Until tomorrow, then, I am, as ever
Your Phil
Posted by Marilyn at 8:44 AM