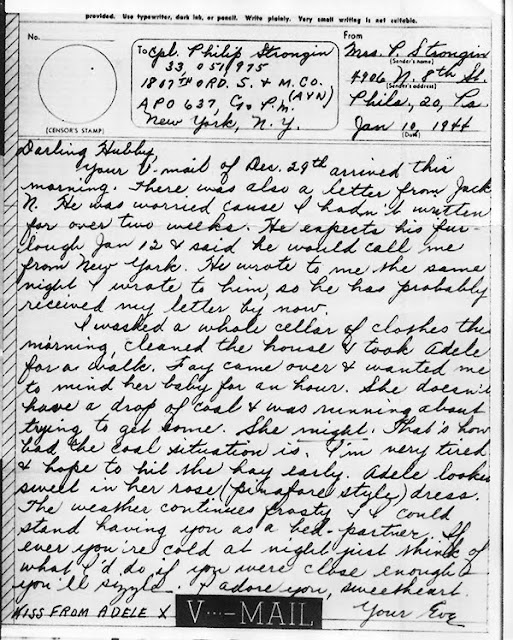 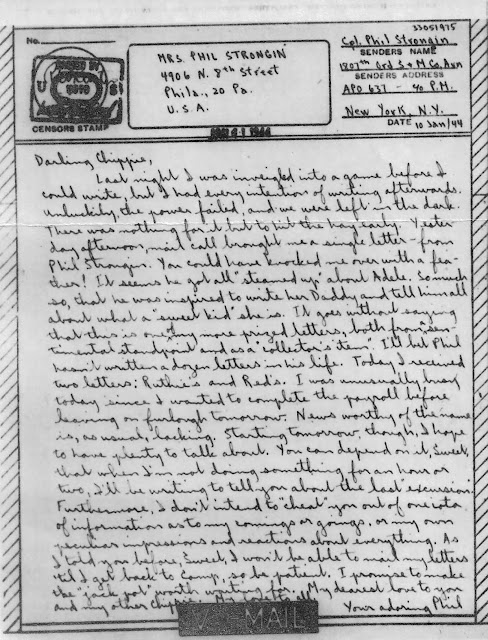 Your V-mail of Dec. 29th arrived this morning. There was also a letter from Jack N. He was worried 'cause I haven't written for over two weeks. He expects his furlough Jan. 12th and said he would call me from New York. He wrote to me the same night I wrote to him, so he has probably received my letter by now.

I washed a whole cellar of clothes this morning, cleaned the house and took Adele for a walk. Fay came over and wanted me to mind her baby for an hour. She doesn't have a drop of coal and was running about trying to get some. She might. That's how bad the coal situation is. I'm very tired and hope to hit the hay early. Adele looks well in her rose (pinafore style) dress. The weather continues frosty and I could stand having you as a bed-partner. If ever you're cold at night, just think of what I’d do if you were close enough—you’ll sizzle. I adore you, sweetheart. Kiss from Adele X.

Last night I was inveigled into a game before I could write, but I had every intention of writing afterwards. Unluckily, the power failed and we were left in the dark. There was nothing for it but to hit the hay early. Yesterday afternoon, mail call brought me a single letter—from Phil Strongin. You could have knocked me over with a feather! It seems he got all “steamed up” about Adele. So much so, that he was inspired to write her Daddy and tell him all about what a “sweet kid” she is. It goes without saying that this is one of my more prized letters both from a sentimental standpoint, and as a “collector’s item.” I'll bet Phil hasn't written a dozen letters in his life. Today I received two letters: Ruthie’s and Red’s. I was unusually busy today since I wanted to complete the payroll before leaving on furlough tomorrow. News worthy of the name is, as usual, lacking. Starting tomorrow, though, I hope to have plenty to talk about. You can depend on it, Sweet, that when I'm not doing something for an hour or two, I'll be writing to tell you about the last “excursion.” Furthermore, I don't intend to cheat you out of one iota of information as to my comings or goings, or my own peculiar impressions and reactions about everything. As I told you before, Sweet, I won't be able to mail my letters ’til I get back to camp, so be patient. I promise to make the “jack pot” worth waiting for. My dearest love to you and my other Chippie. My love to all.