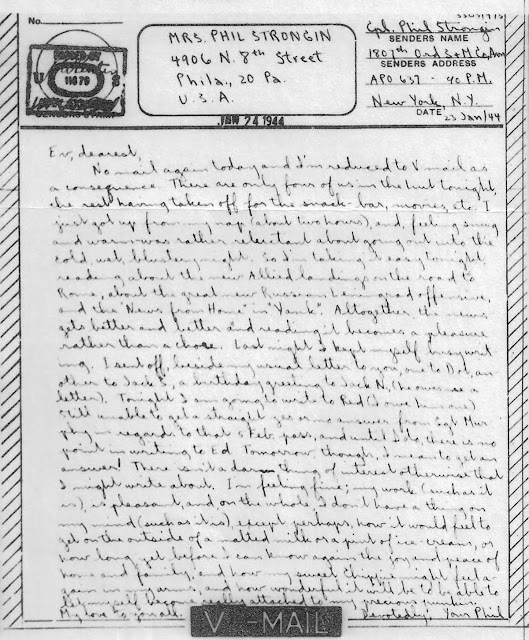 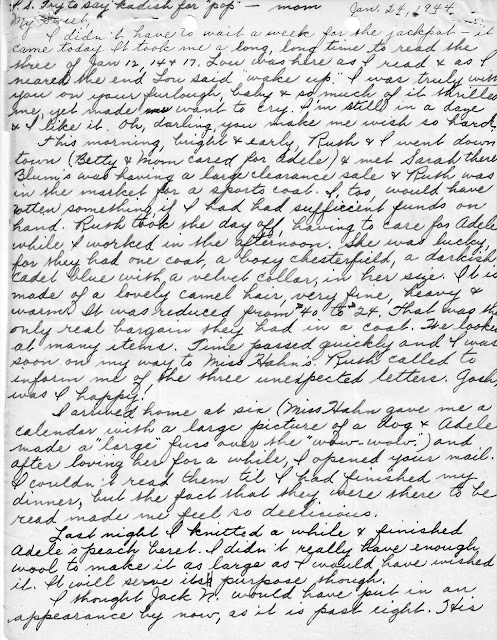 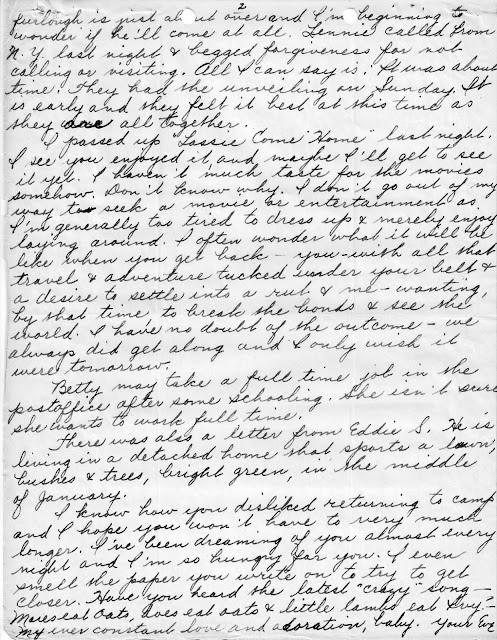 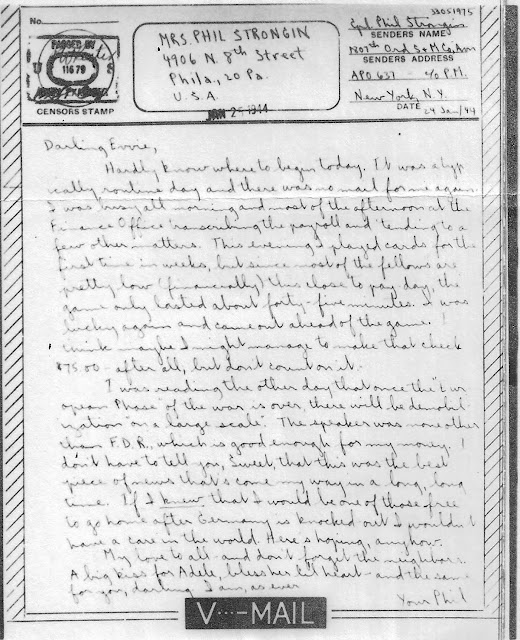 No mail again today and I'm reduced to V-mail as a consequence. There are only four of us in the hut tonight, the rest having taken off for the snack bar, movies, etc. I just got up from my nap (about two hours) and feeling snug and warm, was rather reluctant about going out into the cold, wet, blustery night. So, I'm taking it easy tonight. Reading about the new Allied landings on the road to Rome. About the great New Russian Leningrad offensive, and the “News from Home” in “Yank.” Altogether, the news gets better and better and reading it becomes a pleasure rather than a chore. Last night I kept myself busy writing. I sent off, beside my usual letter to you, one to Dot, another to Jack S., a birthday greeting to Jack N. (he owes me a letter). Tonight I am going to write to Red (I owe him one). Still unable to get straight yes or no answer from Sgt. Murphy in regards to that. 5 Feb. pass, and until I do, there is no point in writing to Ed. Tomorrow, though, I mean to get an answer! There isn't a darn thing of interest otherwise that I might write about. I’m feeling fine; my work (such as it is), is pleasant, and, on the whole, I don't have a thing on my mind (such as it is), except perhaps how it would feel to get on the outside of a malted milk or a pint of ice-cream, or how long yet before I can know ever again the joy and peace of home and family, and how my sweet Chippie might feel again in my arms, and how wonderful it will be to be able to let myself become really attached to my precious punkin. My love to you all.

I didn't have to wait a week for the jackpot—it came today. It took me a long, long time to read the three of Jan. 12, 14 and 17. Lou was here as I read, and as I reached the end, Lou said, “wake up.” I was truly with you on your furlough, baby, and so much of it thrilled me, yet made me want to cry. I'm still in a daze and I like it. Oh, darling, you make me wish so hard.

This morning, bright and early, Ruth and I went down town (Betty and Mom cared for Adele), and met Sarah there. Blum’s was having a large clearance sale and Ruth was in the market for a sports coat. I, too, would have gotten something if I had had sufficient funds on hand. Ruth took the day off, having to care for Adele while I worked in the afternoon. She was lucky, for they had one coat, a boxy Chesterfield, a darkish cadet blue with a velvet collar, in her size. It is made of a lovely camel hair, very fine, heavy and warm. It was reduced from $40 to $24. That was the only real bargain they had in a coat. We looked at many items. Time passed quickly and I was soon on my way to Miss Hahn’s. Ruth called to inform me of the three unexpected letters. Gosh, was I happy!

I arrived home at six (Miss Hahn gave me a calendar with a large picture of a dog and Adele made a “large” fuss over the “wow-wow”), and after loving her for a while, I opened your mail. I couldn't read them til I had finished my dinner, but the fact that they were there to be read made me feel so deelicius.

Last night I knitted a while and finished Adele’s peach beret. I didn't really have enough wool to make it as large as I would have wished it. It will serve its purpose, though.

I thought Jack N. would have put in an appearance by now, as it is just past eight. His furlough is just about over, and I'm beginning to wonder if he'll come at all. Lennie called from New York last night and begged forgiveness for not calling or visiting. All I can say is: It was about time. They had the unveiling on Sunday. It is early and they feel it best at this time as they are all together.

I passed up, “Lassie, Come Home” last night. I see you enjoyed it and maybe I'll get to see it yet. I haven't much taste for the movies, somehow. Don't know why. I don't go out of my way to seek a movie as entertainment as I'm generally too tired to dress up and merely enjoy laying around. I often wonder what it will be like when you get back—you with all that travel and adventure tucked under your belt, and a desire to settle into a rut, and me—wanting by that time, to break the bonds and see the world. I have no doubt of the outcome—we always did get along, and I only wish it were tomorrow.

Betty may take a full time job in the post office after some schooling. She isn't sure she wants to work full-time.

There was also a letter from Eddie S. He is living in a detached home that sports a lawn, bushes and trees, bright green in the middle of January.

I know how you disliked returning to camp and I hope you won't have to very much longer. I've been dreaming of you almost every night and I'm so hungry for you. I even smell the paper you write on to try to get closer. Have you heard the latest “crazy” song—Mares eat oats, does eat oats, and little lambs eat ivy? My ever constant love and adoration, baby.

Hardly know where to begin today. It was a typically routine day and there was no mail for me again. I was busy all morning and most of the afternoon at the Finance Office transcribing the payroll and tending to a few other matters. This evening, I played cards for the first time in weeks, but since most of the fellows are pretty low (financially) this close to payday, the game only lasted about forty-five minutes. I was lucky again and came out ahead of the game. I think maybe I might manage to make that check $75 after all, but don't count on it.

I was reading the other day that once the “European Phase” of the war is over, there will be demobilization “on a large scale.” The speaker was none other than F.D.R., which is good enough for my money. I don't have to tell you, Sweet, that this was the best piece of news that's come my way in a long, long time. If I knew that I would be one of those free to go home after Germany is knocked out, I wouldn't have a care in the world. Here's hoping anyhow.

My love to all and don't forget the neighbors. A big kiss for Adele, bless her lil heart—and the same for you darling. I am, as ever