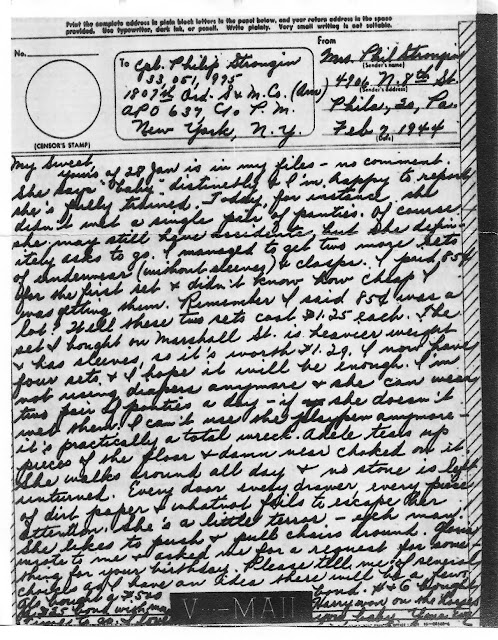 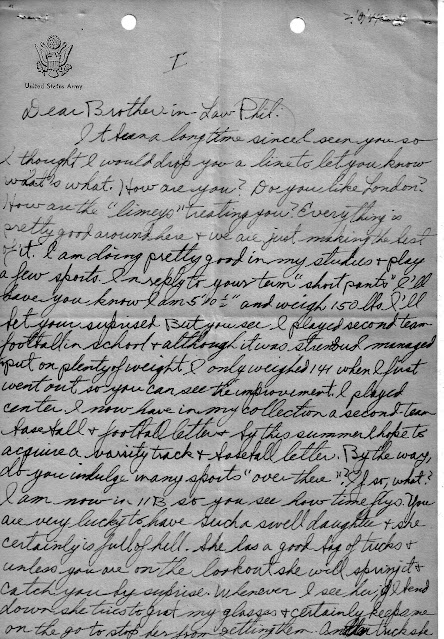 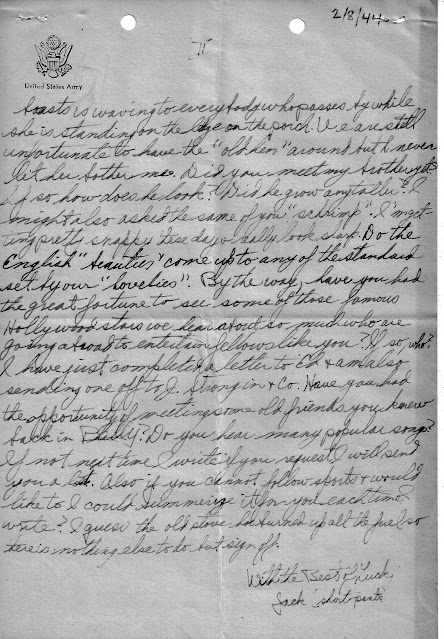 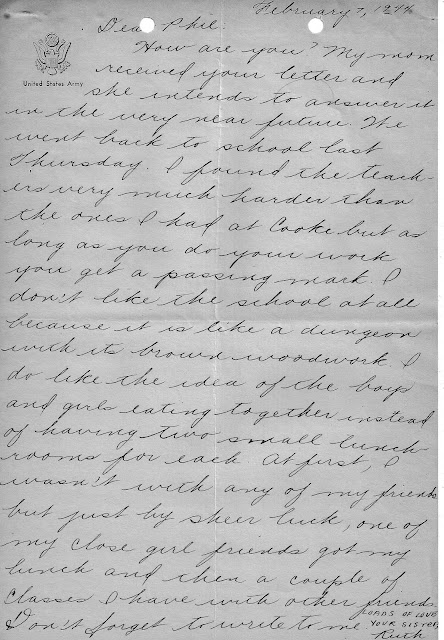 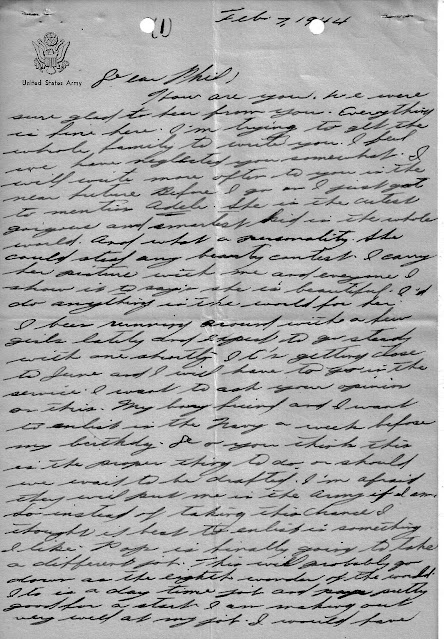 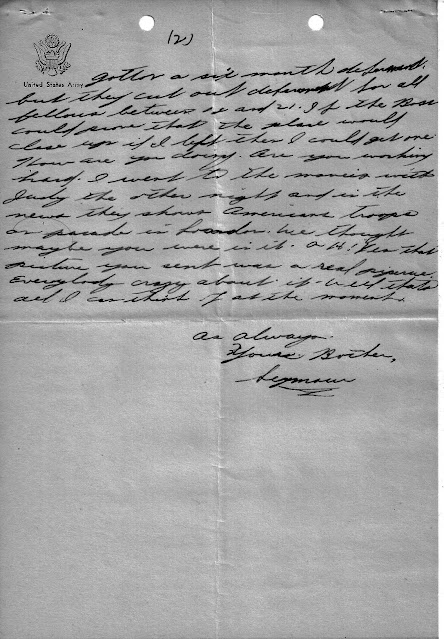 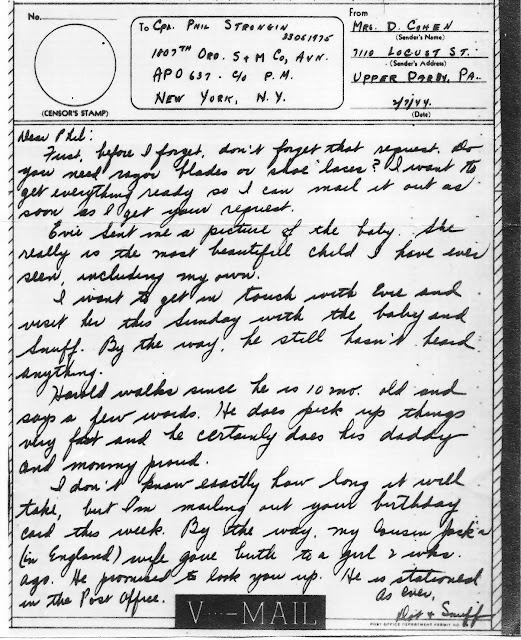 Y¢ours of 28 Jan. is in my files—no comment. She says “baby” distinctly and I'm happy to report she's fully trained. Today, for instance, she didn't wet a single pair of panties. Of course, she may still have accidents, but she definitely asked to go. I managed to get two more sets of underwear (without sleeves) and clasps. I paid 85¢ for the first set and didn't know how cheap I was getting them. Remember I said 85¢ cents was a lot? Well, these two sets cost $1.25 each. The set I bought on Marshall St. is heavier weight and has sleeves, so it's worth $1.29. I now have four sets and I hope it will be enough. I'm not using diapers anymore and she can wear two pairs of panties a day—if she doesn't wet them. I can't use the playpen anymore—it's practically a total wreck. Adele tears up pieces of the floor and damn near choked on it. She walks around all day and no stone is left unturned. Every door, every drawer, every piece of dirt, paper and whatnot fails to escape her attention. She's a little terror—yeh man! She likes to push and pull chairs around. Gloria wrote to me and asked me for a request for something for your birthday. Please tell me of several choices as I have an idea there will be a few. Glo bought a $5.00 bond. Harry and Goldie bought a $2.25 bond with some money Harry won on the horses. Time to go. I love you baby.

It's been a long time since I seen you, so I thought I would drop you a line to let you know what's what. How are you? Do you like London? How are the “limeys” treating you? Everything is pretty good around here and we're just making the best of it. I'm doing pretty good in my studies and play a few sports. In reply to your term “short pants,” I'll have you know I'm 5'10-1/2" and weigh 150 lbs. I’ll bet your surprised. But you see I played second team football in school and although it was strenuous, I managed to put on plenty of weight. I only weighed 141 when I first went out, so you can see the improvement. I played center. I now have in my collection a second team baseball and football letter, and by this summer I hope to acquire a varsity track and baseball letter. By the way, do you indulge in any sports “over there”? If so, what? I am now in 11B so you see how time flies. You are very lucky to have such a swell daughter, and she certainly is full of hell. She has a good bag of tricks and unless you are on the lookout she will spring it and catch you by surprise. Whenever I see her, if I bend down, she tries to grab my glasses and certainly keeps me on the go to stop her from getting them. Another trick she boasts is waving to everybody who passes by while she's standing on the ledge on the porch. We are still unfortunate to have the “old hen” around, but I never let her bother me. Did you meet my brother yet? If so, how does he look? Did he grow any taller? I might also ask the same of you “schrimp.” I'm getting pretty snappy these days and really look sharp. Do the English “beauties” come up to any of the standards set by our “lovelies.” By the way, have you had the great fortune to see some of those famous Hollywood stars we hear about so much who are going abroad to entertain fellows like you? If so, who? I have just completed a letter to Ed and I'm also sending one off to J. Strongin and Co. Have you had the opportunity of meeting some old friends you knew back in Philly? Do you hear many popular songs? If not, next time I write, if you request, I will send you a list. Also, if you cannot follow sports and would like to, I could summarize it for you each time I write. I guess the old stove has burned up all the fuel so there is nothing else but to sign off.

With the Best of Luck,
Jack “shortpants”

How are you? My mom received your letter and she intends to answer it in the very near future. We went back to school last Thursday. I found the teachers very much harder than the ones I had at Cooke, but as long as you do your work you get a passing mark. I don't like the school at all because it is like a dungeon with its brown woodwork. I do like the idea of the boys and girls eating together instead of having two small lunchrooms for each. At first, I wasn't with any of my friends, but just by sheer luck, one of my close girlfriends got my lunch and then a couple of classes I have with other friends. Don't forget to write to me. l

Loads of love,
Your Sister
Ruth

How are you? We were sure glad to hear from you. Everything is fine here. I'm trying to get the whole family to write you. I feel we have neglected you somewhat. I will write more often to you in the near future. Before I go on, I just got to mention Adele. She is the cutest, gorgeous and smartest kid in the whole world. And what personality. She could steal any beauty contest. I carry her picture with me and everyone I show it to says she's beautiful. I’d do anything in the world for her.

I've been running around with a few girls lately and expect to go steady with one shortly. It's getting close to June and I will have to go in the service. I want to ask your opinion on this. My boyfriend and I want to enlist in the Navy a week before my birthday. You think this is the proper thing to do or should we wait to be drafted? I'm afraid they will put me in the Army if I am. So instead of taking this chance, I thought it best to enlist in something I like. Pop is finally going to take a different job. This will probably go down as the eighth wonder of the world. It's a daytime job and pays pretty good for a start. I am making out very well in my job. I would have gotten a six month deferment, but they cut out deferment for all fellows between 18 and 21. If the Boss could prove that the place would close up if I left, then I could get one.

How are you doing? Are you working hard? I went to the movies with Judy the other night and in the news they show American troops on parade in London. We thought maybe you were in it. Oh! Yes, that picture you sent was a real piperue. Everybody's crazy about it. Well, that's all I can think of at the moment.

As always,
Your Brother,
Seymour

First, before I forget, don't forget that request. Do you need razor blades or shoe laces? I want to get everything ready so I can mail it out as soon as I get your request.

Evie sent me a picture of the baby. She really is the most beautiful child I have ever seen, including my own.

I want to get in touch with Evie and visit her this Sunday with the baby and Snuff. By the way, he still hasn't heard anything.

Harold walks since he is 10 mo. old and says a few words. He does pick up things very fast and he certainly does his daddy and mommy proud.

I don't know exactly how long it will take, but I'm mailing out your birthday card this week. By the way, my cousin Jack’s (in England) wife gave birth to a girl two weeks ago. He promised to look you up. He's stationed in the Post Office.

As ever,
Dot and Snuff
Posted by Marilyn at 6:25 PM