Post #293 - February 12, 1944 Harold is a Regular Grownup Kid Where Adele is Still Quite Babyish and I was Actually Homesick—Painfully So 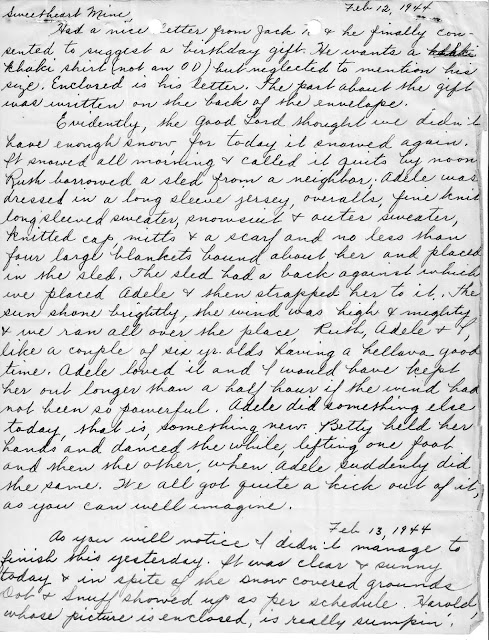 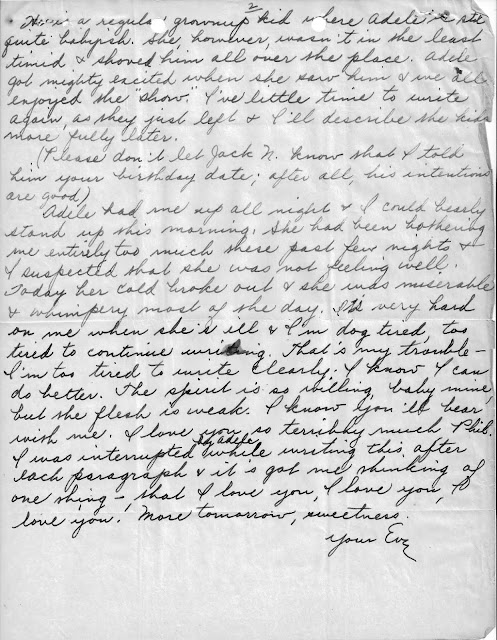 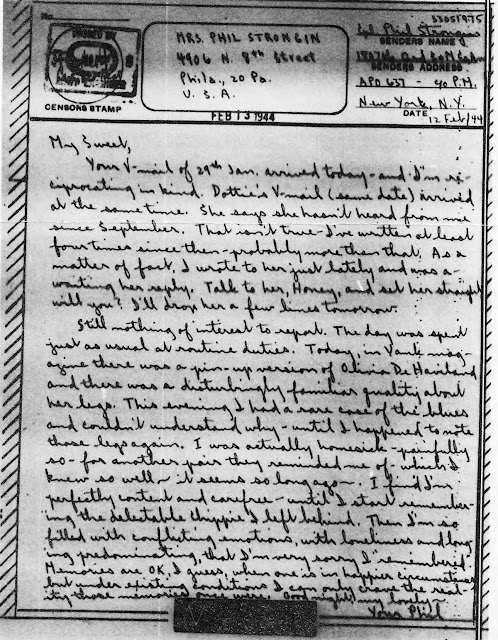 Had a nice letter from Jack N. and he finally consented to suggest a birthday gift. He wants a khaki shirt (not an OD), but neglected to mention his size. Enclosed is his letter. The part about the gift was written on the back of the envelope.

Evidently the Good Lord thought we didn't have enough snow, for today, it snowed again. It snowed all morning and called it quits by noon. Ruth borrowed a sled from a neighbor. Adele was dressed in a long sleeve jersey, overalls, fine knit long sleeve sweater, snowsuit, and outer sweater, knitted cap, mitts and a scarf and no less than four large blankets bound about her and placed in the sled. The sled had a back against which we placed Adele and then strapped her to it. The sun shone brightly, the wind was high and mighty, and we ran all over the place, Ruth, Adele and I like a couple of six year olds having a helluva good time. Adele loved it and I would have kept her out longer than a half hour if the wind had not been so powerful. Adele did something else today, that is something new. Betty held her hands and danced the while, lifting one foot and then the other, when Adele suddenly did the same. We all got quite a kick out of it as you can well imagine.

As you will notice, I didn't manage to finish this yesterday. It was clear and sunny today and, in spite of the snow covered grounds, Dot and Snuff showed up as per schedule. Harold, whose picture is enclosed, is really sumpin’. He's a regular grownup kid where Adele is still quite babyish. She, however, wasn't in the least timid and shoved him all over the place. Adele got mighty excited when she saw him and we all enjoyed the “show.” I’ve little time to write again, as they just left and I’ll describe he kids more fully later.

(Please don’t let Jack N. know that I told him your birthday date; after all, his intentions are good.)

Adele had me up all night and I could barely stand up this morning. She had been bothering me entirely too much these past few nights, and I suspected that she was not feeling well. Today her cold broke out and she was miserable and whimpery most of the day. It's very hard on me when she's ill and I'm dog tired, too tired to continue writing. That's my trouble, I'm too tired to write clearly. I know I can do better. The spirit is so willing, baby mine, but the flesh is weak. I know you will bear with me. I love you so terribly much Phil. I was interrupted by Adele while writing this after each paragraph and it's got me thinking of one thing—that I love you, I love you, I love you! More tomorrow, sweetness.

Your V-mail of 29th Jan. arrived today—and I'm reciprocating in kind. Dottie's V-mail (same date) arrived at the same time. She says she hasn't heard from me since September. That isn't true—I've written at least four times since then—probably more than that. As a matter of fact, I wrote to her just lately and was awaiting her reply. Talk to her, Honey, and set her straight will you? I'll drop her a few lines tomorrow.

Still nothing of interest to report. The day was spent just as usual at routine duties. Today, in Yank magazine there was a pin-up version of Olivia to Haviland, and there was a disturbingly familiar quality about her legs. This evening I had a rare case of the blues and couldn't understand why—until I happened to note those legs again. I was actually homesick—painfully so—for another pair they reminded me of—which I knew so well—it seems so long ago. I find I'm perfectly content and carefree—until I start remembering the delectable Chippie I left behind. Then I'm so filled with conflicting emotions, with loneliness and longing predominating, that I'm very sorry I “remembered.” Memories are OK, I guess when one is in happier circumstances, but under existing conditions I can only crave the reality those memories once were. Goodnight, my lovely.