Post #329 - March 26, 27, 1944 Gloria Went with the Gang to See Hal Chase and Said He is a Riot and Your Letters are So Essential to My Peace-of-Mind and General Morale 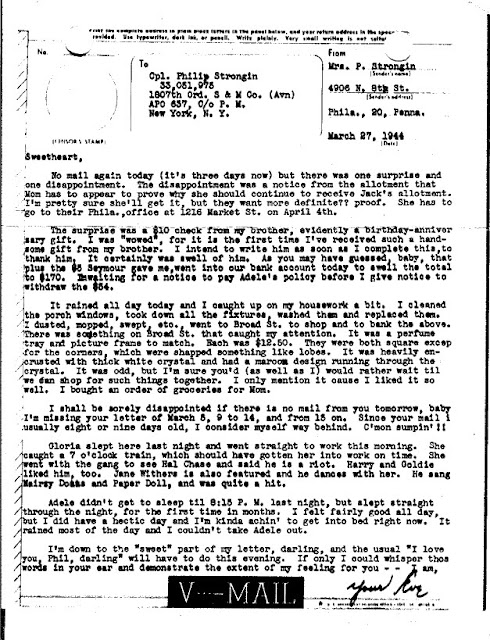 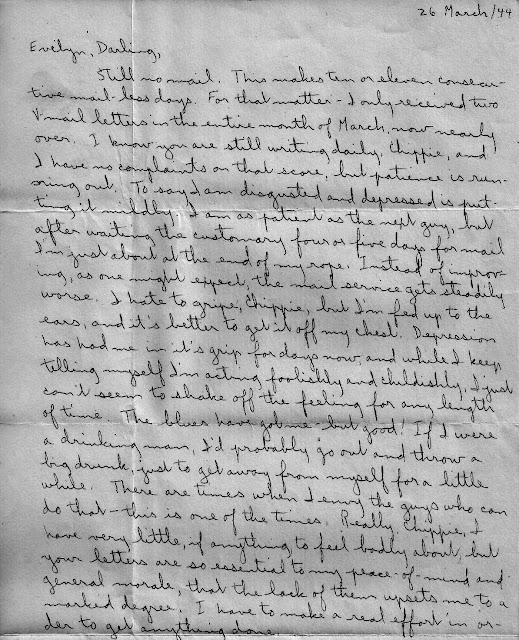 No mail again today (it's three days now) but there was one surprise and one disappointment. The disappointment was a notice from the allotment that Mom has to appear to prove why she should continue to receive Jack's allotment. I'm pretty sure she'll get it, but they want more definite?? proof. She has to go to their Phila., office at 1216 Market St. on April 4th.

The surprise was a $10 check from my brother, evidently a birthday-anniversary gift. I was "wowed", for it is the first time I've received such a handsome gift from my brother. I intend to write him as soon as I complete this, to thank him. It certainly was swell of him. As you may have guessed, baby, that plus the $5 Seymour gave me, went Into our bank account today to swell the total to $170. I’m waiting for a notice to pay Adele's policy before I give notice to withdrew the $54.

It rained all day today and I caught up on my housework bit. I cleaned the porch windows, took down all the fixtures, washed them and replaced them. I dusted, mopped, swept, etc., went to Broad St. to shop and to bank the above. There was something on Broad St. that caught my attention. It was a perfume tray and picture frame to match. Each was $12.50. They were both square except for the corners, which were shaped something like lobes. It was heavily encrusted with thick white crystal and had a maroon design running through the crystal. It was odd, but I'm sure you'd (as well as I) would rather wait til we can shop for such things together. I only mention it cause I liked it so well. I bought an order of groceries for Mom.

I shall be sorely disappointed if there is no mail from you tomorrow, baby. I'm missing your letter of March 5, 9 to 14, and from 15 on. Since your mail is usually eight or nine days old, I consider myself way behind. C’mon sumpin'!!

Gloria slept here last night and went straight to work this morning. She caught a 7 o'clock train, which should have gotten her into work on time. She went with the gang to see Hal Chase and said he is a riot. Harry and Goldie liked him, too. Jane Withers is also featured and he dances with her. He sang Mairsy Doats and Paper Doll, and was quite a hit.

Adele didn't get to sleep til 8:15 P.M. last night, but slept straight through the night, for the first time in months. I felt fairly good all day, but I did have a hectic day and I'm kinda achin' to get into bed right now. It rained most of the day and I couldn't take Adele out.

I'm down to the “sweet" part of my letter, darling, and the usual "I love you, Phil, darling” will have to do this evening. It only I could whisper those words in your ear and demonstrate the extent of my feeling for you -- I am,

Still no mail. This makes ten or eleven consecutive mail-less days. For that matter, I only received two V-mail letters in the entire month of March, now nearly over. I know you are still writing daily, Chippie, and I have no complaints on that score, but patience is running out. To say I am disgusted and depressed, is putting it mildly. I am as patient as the next guy, but after waiting the customary four or five days for mail, I'm just about at the end of my rope. Instead of improving, as one might expect, the mail service gets steadily worse. I hate to gripe, Chippie, but I'm fed up to the ears, and it's better to get it off my chest. Depression has had me in its grip for days now, and while I keep telling myself I'm acting foolishly and childishly, I just can't seem to shake off the feeling for any length of time. The blues have got me—but good! If I were drinking man, I'd probably go out and throw a big drunk just to get away from myself for a little while. There are times when I envy the guys who can do that. This is one of the times. Really, Chippie, I have very little if anything to feel badly about, but your letters are so essential to my peace-of-mind and general morale, that the lack of them upsets me to a marked degree. I have to make a real effort in order to get anything done.

Forgive me, Sweet, for burdening you with my little troubles. You probably have enough of your own. Since there isn't anything of interest to report today, you'll have to bear with me, darling, if I seem to cut this short.

When all is said and done, only one thing is really important—I love you, my Evvie, with every fiber of my being. It is the one unalterable truth that sustains me always. Love to all from