Post #331 - March 29, 1944 The Driver Had About as Much Idea of Where the Frankford Hospital was as I Have of Your Exact Location in England and Your Four Letters are Balm for My Eyes 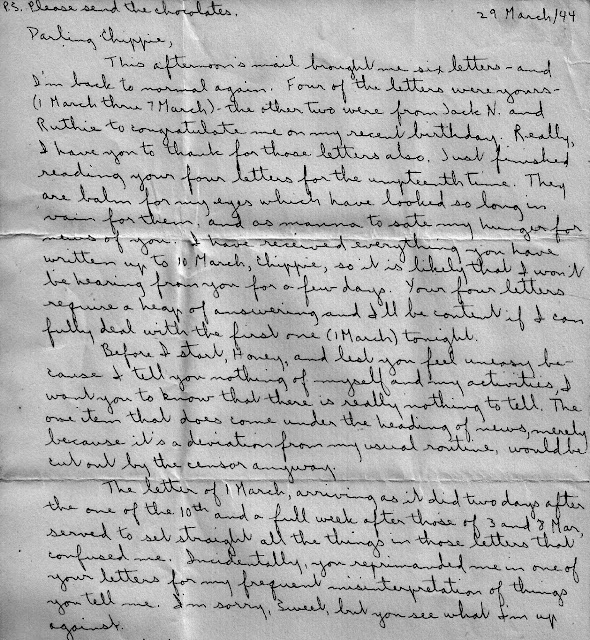 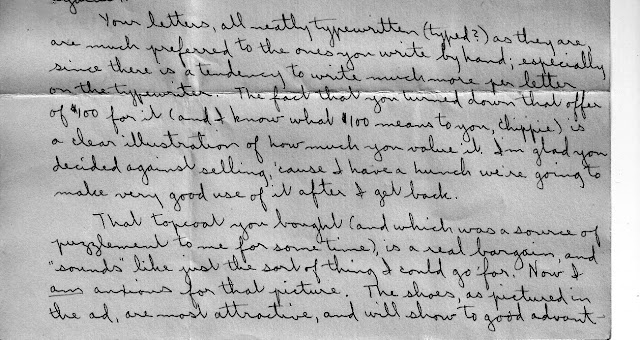 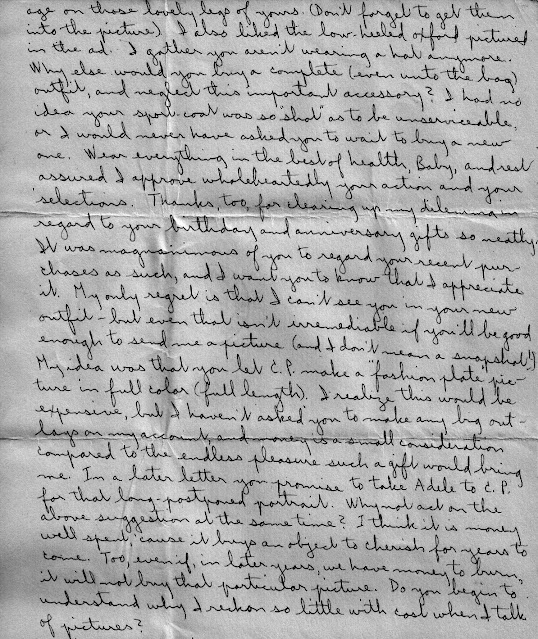 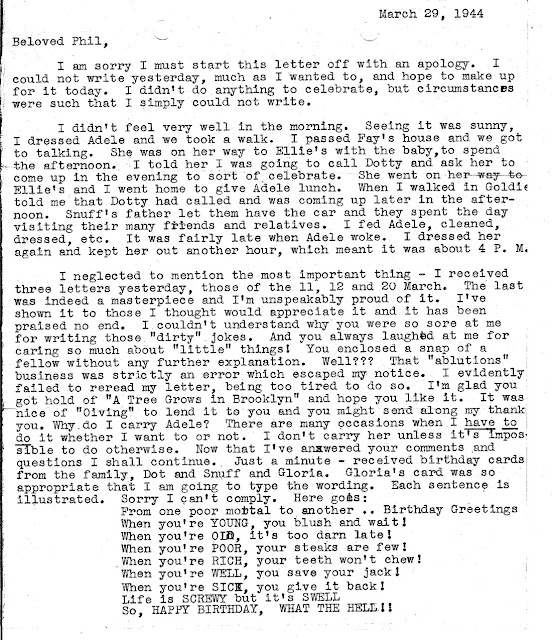 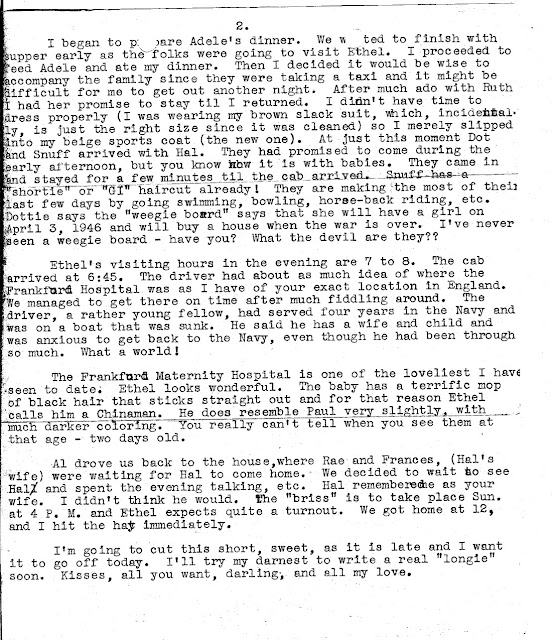 I am sorry I must start this letter off with an apology. I could not write yesterday, much as I wanted to, and hope to make up for it today. I didn't do anything to celebrate, but circumstances were such that I simply could not write.

I didn't feel very well in the morning. Seeing it was sunny, I dressed Adele and we took a walk. I passed Fay's house and we got to talking. She was on her way to Ellie's with the baby, to spend the afternoon. I told her I was going to call Dotty and ask her to come up in the evening to sort of celebrate. She went on her way to Ellie’s and I went home to give Adele lunch. When I walked in Goldie told me that Dotty had called and was coming up later in the afternoon. Snuff’s father let them have the car and they spent the day visiting their many friends and relatives. I fed Adele, cleaned, dressed, etc. It was fairly late when Adele woke. I dressed her again and kept her out another hour, which meant it was about 4 P.M.

I neglected to mention the most important thing - I received three letters yesterday, those of the 11, 12 and 20 March. The last was indeed a masterpiece and I'm unspeakably proud of it. I've shown it to those I thought would appreciate it and it has been praised no end. I couldn't understand why you were so sore at me for writing those "dirty" jokes, And you always laughed at me for caring so much about "little" things! You enclosed a snap of a fellow without any further explanation. Well??? That "ablutions" business was strictly an error which escaped my notice. I evidently failed to reread my letter, being too tired to do so. I'm glad you got hold of "A Tree Grows in Brooklyn" and hope you like it. It was nice of "Oiving” to lend it to you and you might send along my thank you. Why do I carry Adele? There are many occasions when I have to do it whether I want to or not. I don't carry her unless it's impossible to do otherwise. Now that I've answered your comments and questions I shall continue. Just a minute - received birthday cards from the family. Dot and Snuff and Gloria. Gloria's card was so appropriate that I am going to type the wording. Each sentence is illustrated. Sorry I can't comply. Here goes:

From one poor mortal to another .. Birthday Greetings

When you're YOUNG, you blush and wait!

When you're OLD, it’s too darn late!

When you're POOR, your steaks are few!

When you're RICH, your teeth won't chew!

When you're WELL, you save your jack!

When you're SICK, you give it back!

Life is SCREWY but it's SWELL

So, HAPPY BIRTHDAY. WHAT THE HELL!!

I began to prepare Adele's dinner. We wanted to finish with supper early as the folks were going to visit Ethel. I proceeded to feed Adele and ate my dinner. Then I decided it would be wise to accompany the family since they were taking a taxi and it might be difficult for me to get out another night. After much ado with Ruth, I had her promise to stay til I returned. I didn't have time to dress properly (I was wearing my brown slack suit, which, incidentally, is just the right size since it was cleaned) so I merely slipped into my beige sports coat (the new one). At just this moment Dot and Snuff arrived with Hal. They had promised to come during the early afternoon, but you know how it is with babies. They came in and stayed for a few minutes til the cab arrived. Snuff has a "shortie" or "GI" haircut already! They are making the most of their last few days by going swimming, bowling, horse-back riding, etc. Dottie says the "weegie board" says that she will have a girl on April 3, 1946 and will buy a house when the war is over. I've never seen a weegie board - have you? What the devil are they??

Ethel's visiting hours in the evening are 7 to 8. The cab arrived at 6:45. The driver had about as much idea of where the Frankford Hospital was as I have of your exact location in England. We managed to get there on time after much fiddling around. The driver, a rather young fellow, had served four years in the Navy and was on a boat that was sunk. He said he has a wife and child and was anxious to get back to the Navy, even though he had been through so much. What a world!

The Frankford Maternity Hospital is one of the loveliest I have seen to date. Ethel looks wonderful. The baby has a terrific mop of black hair that sticks straight out and for that reason Ethel calls him a Chinaman. He does resemble Paul very slightly with much darker coloring. You really can't tell when you see them at that age - two days old.

Al drove us back to the house, where Rae and Frances, (Hal’s wife) were waiting for Hal to come home. We decided to wait to see Hal and spent the evening talking, etc. Hal remembered me as your wife. I didn't think he would. The "briss" is to take place Sun. at 4. P.M. and Ethel expects quite a turnout. We got home at 12, and I hit the hay immediately.

I'm going to cut this short, sweet, as it is late and I want it to go off today. I'll try my darnest to write a real "longie" soon. Kisses, all you want, darling, and all my love.

This afternoon's mail brought me six letters—and I'm back to normal again. Four of the letters were yours—(1 March through 7 March)—the other two were from Jack N. and Ruthie to congratulate me on my recent birthday. Really, I have you to thank for those letters also. Just finished reading your four letters for the umpteenth time. They are balm for my eyes which have looked so long in vain for them and as manna to sate my hunger for news of you. I have received everything you have written up to 10 March, Chippie, so it is likely that I won't be hearing from you for a few days. The four letters require a heap of answering, and I'll be content if I can fully deal with the first one (1 March) tonight.

Before I start, Honey, and lest you feel uneasy because I tell you nothing of myself and my activities, I want you to know that there is really nothing to tell. The one item that does come under the heading of news merely because it's a deviation from my usual routine would be cut out by the censor anyway.

The letter of 1 March, arriving as it did two days after the one of the 10th and a full week after those of 3 and 8 Mar, served to set straight all the things in those letters that confused me. Incidentally, you reprimanded me in one of your letters for my frequent misinterpretation of things you tell me. I'm sorry, Sweet, but you see what I'm up against.

Your letters, all neatly typewritten (typed?) as they are, are much preferred to the ones you write by hand; especially since there is a tendency to write much more per letter on the typewriter. The fact that you turned down that offer of $100 for it (and I know what $100 means to you, Chippie) is a clear illustration of how much you value it. I'm glad you decided against selling 'cause I have a hunch we're going to make very good use of it after I get back.

That topcoat you bought (and which was a source of puzzlement to me for some time), is a real bargain, and “sounds” like just the sort of thing I could go for. Now I am anxious for that picture. The shoes, as pictured in the ad, are most attractive, and will show to good advantage those lovely legs of yours. (Don't forget to get them into the picture.) I also liked the low-heeled oxford pictured in the ad. I gather you aren't wearing a hat anymore. Why else would you buy a complete (even unto the bag) outfit and neglect this important accessory? I had no idea your sport coat was so “shot” as to be unserviceable, or I would never have asked you to wait to buy a new one. Wear everything in the best of health, Baby, and rest assured I approve wholeheartedly of your action and your selections. Thanks, too, for clearing up my dilemma in regards to your birthday and anniversary gifts so neatly. It was magnanimous of you to regard your recent purchases as such, and I want you to know that I appreciate it. My only regret is that I can't see you in your new outfit, but even that isn't irremediable. If you'll be good enough to send me a picture (and I don't mean a snapshot!) my idea was that you let Claire Pruett make a “fashion plate” picture in full color (full length). I realize this would be expensive, but I haven't asked you to make any big outlays on my account, and money is a small consideration compared to the endless pleasure such a gift would bring me. In a later letter, you promised to take Adele to Claire Pruett for that long-postponed portrait. Why not act on the above suggestion at the same time? I think it is money well spent, ’cause it buys an object to cherish for years to come. Too, even if, in later years, we have money to burn, it will not buy that particular picture. Do you begin to understand why I reckon so little with cost when I talk about pictures?

Sorry, you don't agree with my idea about making my school ring into a ring for the punkin, but since you feel so strongly about it, I won't insist.

Glad you liked my little Valentine offering, Sweet. I was, I'll now admit, half-fearful you would take exception to it. The information that your weight is 118 tells me better than any words that you are “in the pink.” Good! See you stay that way! The final paragraph of your letter expresses your deep gratitude for the many kindnesses Sarah and Betty have shown you. You may convey my own to them in like measure. “Room to send all my love precious (Evvie) and a kiss (for) Adel-e, as some call her.” Love to all from