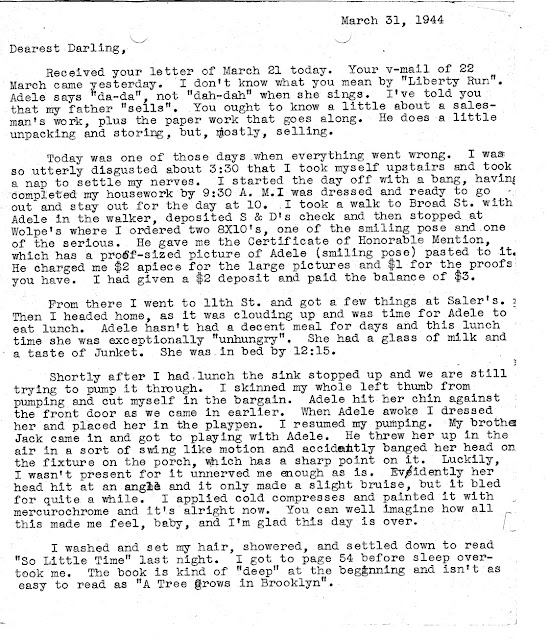 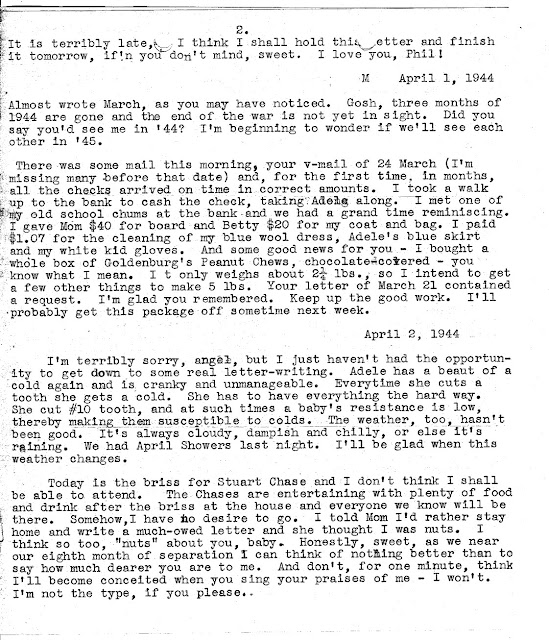 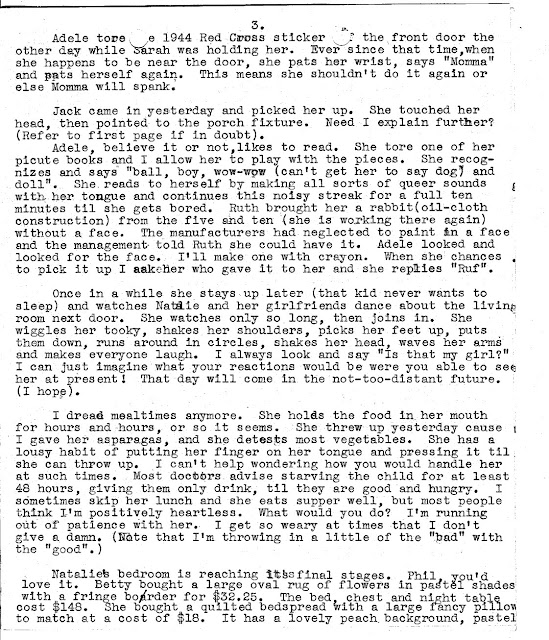 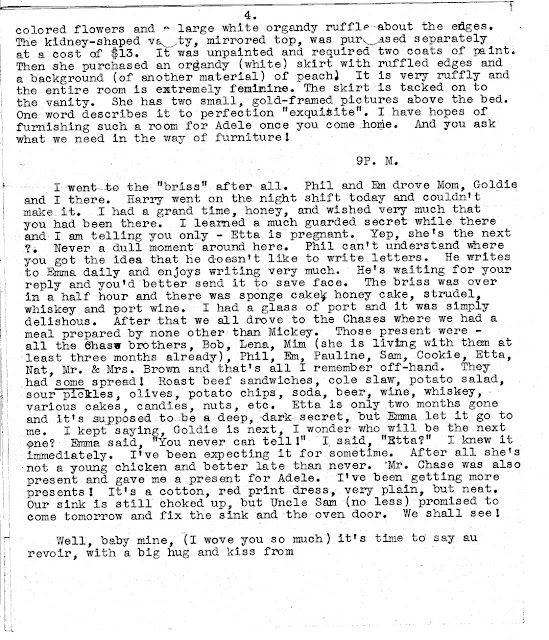 Received your letter of March 21 today. Your V-mail of 22 March came yesterday. I don't know what you mean by "Liberty Run." Adele says "da-da", not "dah-dah" when she sings. I've told you that my father "sells". You ought to know a little about a sales man's work, plus the paper work that goes along. He does a little unpacking and storing, but, mostly, selling..

Today was one of those days when everything went wrong. I was so utterly disgusted about 3:30 that I took myself upstairs and took a nap to settle my nerves. I started the day off with a bang, having completed my housework by 9:30 A.M. I was dressed and ready to go out and stay out for the day at 10. I took a walk to Broad St. with Adele in the walker, deposited S & D’s check and then stopped at Wolpe's where I ordered two 8X10's, one of the smiling pose and one of the serious. He gave me the Certificate of Honorable Mention, which has a proof-sized picture of Adele (smiling pose) pasted to it. He charged me $2 apiece for the large pictures and $1 for the proofs you have. I had given a $2 deposit and paid the balance of $3.

From there I went to 11th St, and got a few things at Saler's. Then I headed home, as it was clouding up and was time for Adele to eat lunch. Adele hasn't had a decent meal for days and this lunch time she was exceptionally "unhungry". She had a glass of milk and a taste of Junket. She was in bed by 12:15.

Shortly after I had lunch the sink stopped up and we are still trying to pump it through. I skinned my whole left thumb from pumping and cut myself in the bargain. Adele hit her chin against the front door as we came in earlier. When Adele awoke I dressed her and placed her in the playpen. I resumed my pumping. My brother Jack came in and got to playing with Adele. He threw her up in the air in a sort of swing like motion and accidently banged her head on the fixture on the porch, which has a sharp point on it. Luckily, I wasn't present for it unnerved me enough as is. Evidently her head hit at an angle and it only made a slight bruise, but it bled for quite a while. I applied cold compresses and painted it with mercurochrome and it's alright now. You can well imagine how all this made me feel, baby, and I'm glad this day is over.
I washed and set my hair, showered, and settled down to read "So Little Time" last night. I got to page 54 before sleep overtook me. The book is kind of "deep" at the beginning and isn't as easy to read as "A Tree grows in Brooklyn".

Almost wrote March, as you may have noticed. Gosh, three months of 1944 are gone and the end of the war is not yet in sight. Did you say you'd see me in ’44? I'm beginning to wonder if we'll see each other in ’45.

There was some mail this morning, your V-mail of 24 March (I'm missing many before that date) and, for the first time, in months, all the checks arrived on time in correct amounts. I took a walk up to the bank to cash the check, taking Adele along. I met one of my old school chums at the bank and we had a grand time reminiscing. I gave Mom $40 for board and Betty $20 for my coat and bag. I paid $1.07 for the cleaning of my blue wool dress, Adele's blue skirt, and my white kid gloves. And some good news for you - I bought a. whole box of Goldenburg's Peanut Chews, chocolate covered - you know what I mean. It only weighs about 2-1/4 lbs., so I intend to get a few other things to make 5 lbs. Your letter of March 21 contained a request. I'm glad you remembered. Keep up the good work. I'll probably get this package off sometime next week.

I'm terribly sorry, angel, but I just haven’t had the opportunity to get down to some real letter-writing. Adele has a beaut of a cold again and is cranky and unmanageable. Every time she cuts a tooth she gets a cold. She has to have everything the hard way. She cut #10 tooth, and at such times a baby's resistance is low, thereby making them susceptible to colds. The weather, too, hasn't been good. It's always cloudy, dampish and chilly, or else it's raining. We had April Showers last night. I'll be glad when this weather changes.
Today is the briss for Stuart Chase and I don't think I shall be able to attend. The Chases are entertaining with plenty of food and drink after the briss at the house and everyone we know will be there. Somehow, I have no desire to go. I told Mom I'd rather stay home and write a much-owed letter and she thought I was nuts. I think so too, "nuts" about you, baby. Honestly, sweet, as we near our eighth month of separation I can think of nothing better than to say how much dearer you are to me. And don't, for one minute, think I'll become conceited when you sing your praises of me - I won't. I'm not the type, if you please.

Adele tore the 1944 Red Cross sticker off the front door the other day while Sarah was holding her. Ever since that time, when she happens to be near the door, she pats her wrist, says "Momma" and pats herself again. This means she shouldn't do it again or else Momma will spank.

Jack came in yesterday and picked her up. She touched her head, then pointed to the porch fixture. Need I explain further? (Refer to first page if in doubt).

Adele, believe it or not, likes to read. She tore one of her picture books and I allow her to play with the pieces. She recognizes and says "ball, boy, wow-wow (can't get her to say dog) and doll.” She reads to herself by making all sorts of queer sounds with her tongue and continues this noisy streak for a full ten minutes til she gets bored. Ruth brought her a rabbit (oil-cloth construction) from the five and ten (she is working there again) without a face. The manufacturers had neglected to paint in a face and the management told Ruth she could have it. Adele looked and looked for the face. I'll make one with crayon. When she chances to pick it up I ask her who gave it to her and she replies "Ruf".

Once in a while she stays up later (that kid never wants to sleep) and watches Natalie and her girlfriends dance about the living room next door. She watches only so long, then joins in. She wiggles her tooky, shakes her shoulders, picks her feet up, puts them down, runs around in circles, shakes her head, waves her arms and makes everyone laugh. I always look and say "Is that my girl?" I can just imagine what your reactions would be were you able to see her at present! That day will come in the not-too-distant future. (I hope).

I dread mealtimes anymore. She holds the food in her mouth for hours and hours, or so it seems. She threw up yesterday cause I I gave her asparagus and she detests most vegetables. She has a lousy habit of putting her finger on her tongue and pressing it til she can throw up. I can't help wondering how you would handle her at such times. Most doctors advise starving the child for at least 48 hours, giving them only drink, til they are good and hungry. I sometimes skip her lunch and she eats supper well, but most people think I'm positively heartless. What would you do? I'm running out of patience with her. I get so weary at times that I don't give a damn. (Note that I'm throwing in a little of the "bad" with the "good".)

Natalie’s bedroom is reaching its final stages. Phil, you'd love it. Betty bought a large oval rug of flowers in pastel shades with a fringe boarder for $32.25. The bed, chest and night table cost $148. She bought a quilted bedspread with a large fancy pillow to match at a cost of $18. It has a lovely peach background, pastel
colored flowers and a large white organdy ruffle about the edges. The kidney-shaped vanity, mirrored top, was purchased separately at a cost of $13. It was unpainted and required two coats of paint. Then she purchased an organdy (white) skirt with ruffled edges and a background (of another material) of peach. It is very ruffly and the entire room is extremely feminine. The skirt is tacked on to the vanity. She has two small, gold-framed pictures above the bed. One word describes it to perfection "exquisite". I have hopes of furnishing such a room for Adele once you come home. And you ask what we need in the way of furniture!

I went to the "briss" after all. Phil and Em drove Mom, Goldie and I there. Harry went on the night shift today and couldn't make it. I had a grand time, honey, and wished very much that you had been there. I learned a much guarded secret while there and I am telling you only - Etta is pregnant. Yep, she's the next ? Never a dull moment around here. Phil can't understand where you got the idea that he doesn't like to write letters. He writes to Emma daily and enjoys writing very much. He's waiting for your reply and you'd better send it to save face. The briss was over in a half hour and there was sponge cake, honey cake, strudel, whiskey and port wine. I had a glass of port and it was simply delishous. After that we all drove to the Chases where we had a meal prepared by none other than Mickey. Those present were - all the Chase brothers, Bob, Lena, Mim (she is living with them at least three months already), Phil, Em, Pauline, Sam, Cookie, Etta, Nat, Mr. & Mrs. Brown and that's all I remember off-hand. They had some spread! Roast beef sandwiches, cole slaw, potato salad, sour pickles, olives, potato chips, soda, beer, wine, whiskey, various cakes, candies, nuts, etc. Etta is only two months gone and it's supposed to be a deep dark secret, but Emma let it go to me. I kept saying, Goldie is next, I wonder who will be the next one? Emma said, "you never can tell!" "I said, "Etta?" I knew it immediately. I've been expecting it for sometime. After all she's not a young chicken and better late than never. Mr. Chase was also present and gave me a present for Adele. I've been getting more presents! It's a cotton, red print dress, very plain, but neat. Our sink is still choked up, but Uncle Sam (no less) promised to come tomorrow and fix the sink and the oven door. We shall see!

Well, baby mine, (I wove you so much) it's time to say au revoir, with a big hug and kiss from
Posted by Marilyn at 1:06 PM