Post #342 - April 12–14, 1944 Mayer Taylor was a Hero and His Picture Appeared in the Newspapers Along with the Story of His Heroism 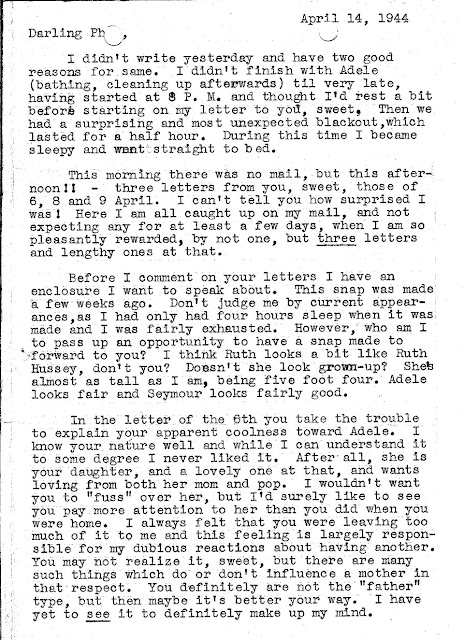 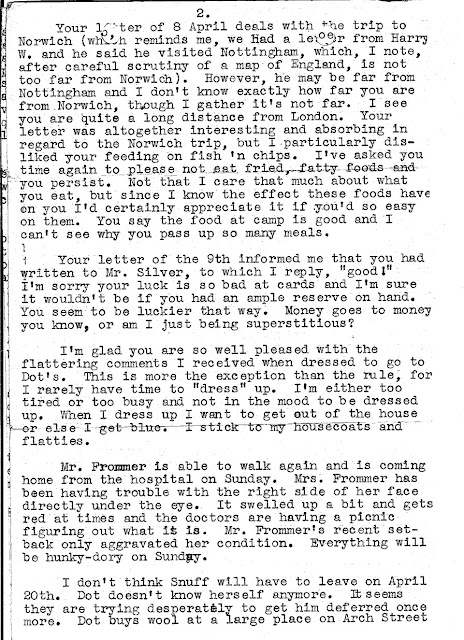 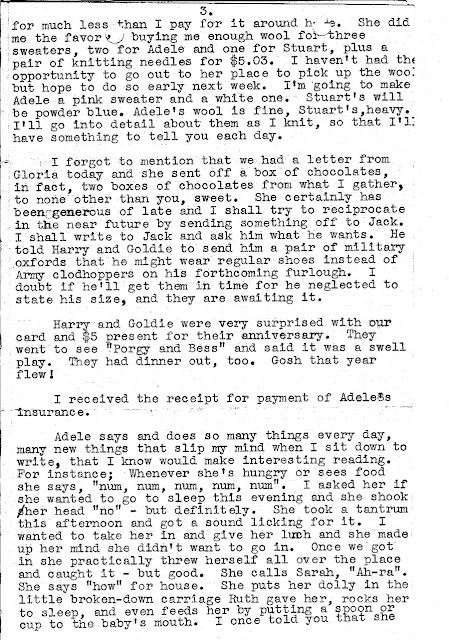 The next page is missing from my archive, sadly.

Imagine, after receiving six letters in two days, my surprise when this morning I found your letter of April 8 under the door. In answer to several of your queries: I don't think the pinafore is worth all the trouble to make saddle-stitching as you suggest; I’ve told you repeatedly that I am not having a fur hat made, that I am using the fur-trimmed hat that Gloria gave me (that is about the tenth time you’ve asked and I hope this will answer your constant inquiries about it); Mayer Taylor is a bombardier and has been in many missions over Germany. On a recent trip over Frankfort the gas mask of the gunner went out of commission (I don't think it was a gas mask, but something to help him breathe in the high altitude). Mayer immediately doffed his and placed it on the gunner, thereby saving his life, at risk of his own. The pilot noted what transpired, broke formation and hit for a lower altitude to give Mayer a break and they all made it safely back to their base. Naturally, Mayer was a hero and his picture appeared in the newspapers, along with the story or his heroism.

That covers your letter of April 6, sweet, and I must add that "you sounded in a "devilish" mood when you wrote it. Whaddya mean you don't care how you spend my money? Don't you mean "our" money? I bought Adele an ice-cream cone the other day and she positively refused to eat it. It was strawberry, by the way, for chocolate is not always obtainable. Nevertheless she only goes for ice-cream when she's in the mood for it. I guess she doesn't take after her mother or father in that respect, huh?

A letter from my brother set a now record yesterday. He wrote the letter (air-mail) on April 8, and my mother received it on April 11. Just three days, honey, and that really is sumpin', all the may from England. It must have caught a fast traveling plane at exactly the right moment. The best I've ever had from you was five days old. I have all your mail up to und including April 6 and that is sumpin’, too! I only hope it continues to arrive so speedily and regularly.

In case my letter of yesterday is late in arriving, I hasten to inform you that Adele and I had our pictures made at Clair Pruett's yesterday. If the pictures turn out well it will be worth the large amount of the bill. If not, you'd better not ask me to take any more pictures for a long while, cause this deal left me flat broke and then some. I'm truly sorry I cannot send the proofs along, but I shall do my best in connection with them. My letter will explain further about the whole thing.

I brought Adele in at five, baby, and though I was busy undressing her and about to give her dinner, I was 3000 miles away in the arms or my beloved hubby. I love you so much, Phil! (Sigh - - -, but then I always did always will and am always (all-ways)

P.S. Didn't realise I had more space and shall use it to advantage, if’n you don't mind. I * LOVE * YOU * DARLING!

I didn't write yesterday and have two good reasons for same. I didn't finish with Adele (bathing, cleaning up afterwards) til very late, having started at 8 P. M. and thought I’d rest a bit before starting on my letter to you, sweet. Then we had a surprising and most unexpected blackout, which lasted for a half hour. During this time I became sleepy and went straight to bed.

This morning there was no mail, but this afternoon!!—three letters from you, sweet, those of 6, 8 and 9 April. I can't tell you how surprised I was! Here I am all caught up on my mail, and not expecting any for at least a few days, when I am so pleasantly rewarded, by not one, but three letters, and lengthy ones at that.

Before I comment on your letters I have an enclosure I want to speak about. This snap was made a few weeks ago. Don't judge me by current appearances, as I had only had four hours sleep when it was made and I was fairly exhausted. However, who am I to pass up an opportunity to have à snap made to forward to you? I think Ruth looks a bit like Ruth Hussey, don't you? Doesn't she look grown-up? She’s almost as tall as I am, being five foot four. Adele looks fair and Seymour looks fairly good.

In the letter of the 6th you take the trouble to explain your apparent coolness toward Adele. I know your nature well and while I can understand it to some degree I never liked it. After all, she is your daughter, and a lovely one at that, and wants loving from both her mom and pop. I wouldn't want you to "fuss" over her, but I'd surely like to see you pay more attention to her than you did when you were home. I always felt that you were leaving too much of it to me and this feeling is largely responsible for my dubious reactions about having another. You may not realize it, sweet, but there are many such things which do or don't influence a mother in that respect. You definitely are not the "father" type, but then maybe it's better your way. I have yet to see it to definitely make up my mind.

Your letter of 8 April deals with the trip to Norwich (which reminds me, we had a letter from Harry W. and he said he visited Nottingham, which, I note, after careful scrutiny of a map of England, is not too far from Norwich). However, he may be far from Nottingham and I don't know exactly how far you are from Norwich, though I gather it's not far. I see you are quite a long distance from London. Your letter was altogether interesting and absorbing in regard to the Norwich trip, but I particularly disliked your feeding on fish ’n chips. I've asked you time again to please not eat fried, fatty foods and you persist. Not that I care that much about what you eat, but since I know the effect these foods have on you I'd certainly appreciate it if you'd so easy on them. You say the food at camp is good and I can't see why you pass up so many meals.

Your letter of the 9th informed me that you had written to Mr. Silver, to which I reply, "good!” I'm sorry your luck is so bad at cards and I'm sure it wouldn't be if you had an ample reserve on hand. You seem to be luckier that way. Money goes to money you know, or am I just being superstitious?

I'm glad you are so well pleased with the flattering comments I received when dressed to go to Dot’s. This is more the exception than the rule, for I rarely have time to "dress" up. I'm either too tired or too busy and not in the mood to be dressed up. When I dress up I want to get out of the house or else I get blue. I stick to my housecoats and flatties.

Mr. Frommer is able to walk again and is coming home from the hospital on Sunday. Mrs. Frommer has been having trouble with the right side of her face directly under the eye. It swelled up a bit and gets red at times and the doctors are having a picnic figuring out what it is. Mr. Frommer’s recent set-back only aggravated her condition. Everything will be hunky-dory on Sunday.

I don't think Snuff will have to leave on April 20th. Dot doesn't know herself anymore. It seems they are trying desperately to get him deferred once more. Dot buys wool at a large place on Arch Street for much less than I pay for it around here. She did me the favor of buying me enough wool for three sweaters, two for Adele and one for Stuart, plus a pair of knitting needles for $5.03. I haven't had the opportunity to go out to her place to pick up the wool, but hope to do so early next week. I'm going to make Adele a pink sweater and a white one. Stuart’s will be powder blue. Adele's wool is fine, Stuart's, heavy. I'll go into detail about them as I knit, so that I'll have something to tell you each day.

I forgot to mention that we had a letter from Gloria today and she sent off a box of chocolates, in fact, two boxes of chocolates from what I gather, to none other than you, sweet. She certainly has been generous of late and I shall try to reciprocate in the near future by sending something off to Jack. I shall write to Jack and ask him what he wants. He told Harry and Goldie to send him a pair of military oxfords that he might wear regular shoes instead of Army clodhoppers on his forthcoming furlough. I doubt if he'll get them in time for he neglected to state his size, and they are awaiting it.

Harry and Goldie were very surprised with our card and $5 present for their anniversary. They went to see "Porgy and Bess" and said it was a swell play. They had dinner out, too. Gosh that year flew!

I received the receipt for payment of Adele’s insurance.

Adele says and does so many things every day, many new things that slip my mind when I sit down to write, that I know would make interesting reading. For instance; Whenever she's hungry or sees food she says, "num, num, num, num, num" I asked her if she wanted to go to sleep this evening and she shook her head "no" - but definitely. She took a tantrum this afternoon and got a sound licking for it. I wanted to take her in and give her Iunch and she made up her mind she didn't want to go in. Once we got in she practically threw herself all over the place and caught it - but good. She calls Sarah, "Ah-ra". She says "how" for house. She puts her dolly in the little broken-down carriage Ruth gave her, rocks her to sleep, and even feeds her by putting a spoon or cup to the baby's mouth. I once told you that she