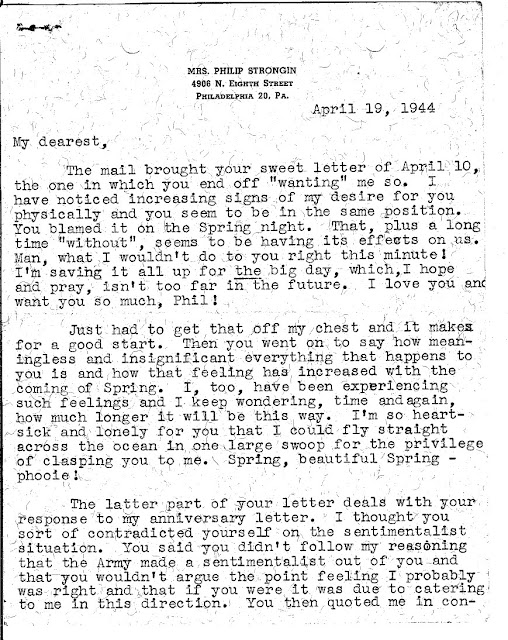 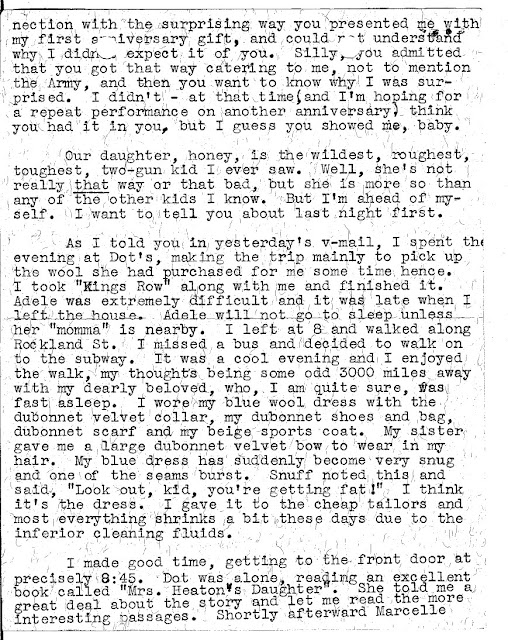 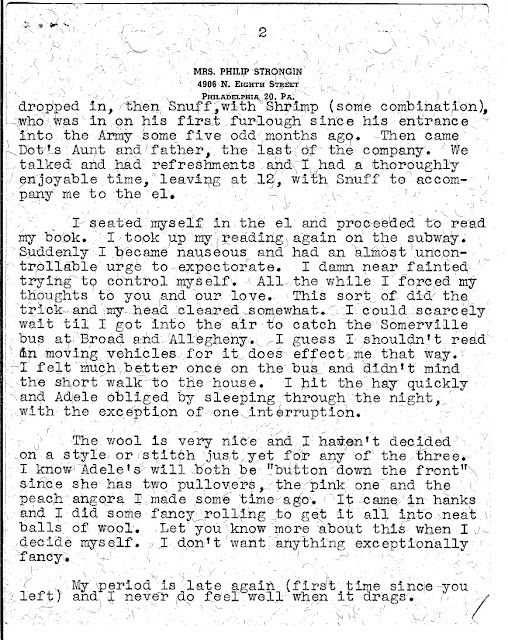 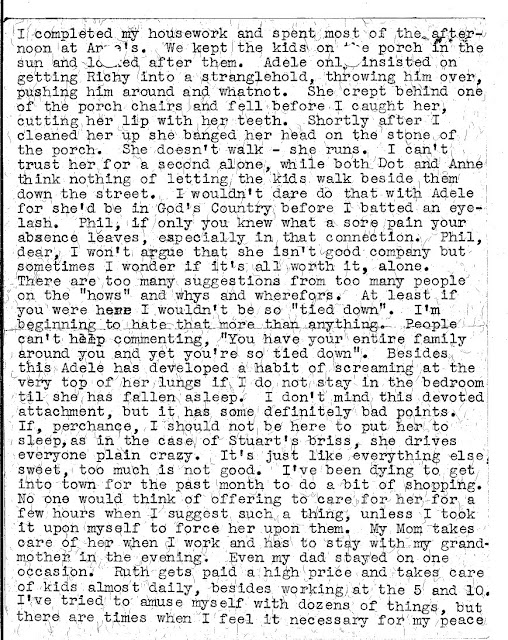 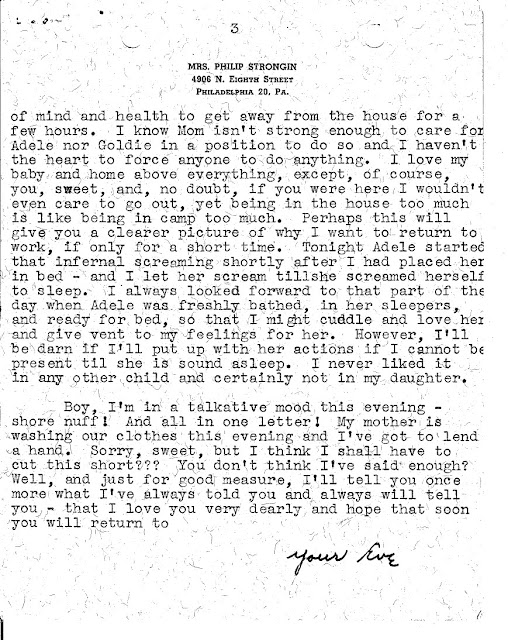 The mail brought your sweet letter of April 10, the one in which you end off "wanting" me so. I have noticed increasing signs of my desire for you physically and you seem to be in the same position. You blamed it on the Spring night. That, plus a long time “without", seems to be having its effects on us. Man, what I wouldn't do to you right this minute! I'm saving it all up for the big day, which, I hope and pray, isn't too far in the future. I love you and want you so much, Phil!

Just had to get that off my chest and it makes for a good start. Then you went on to say how meaningless and insignificant everything that happens to you is and how that feeling has increased with the coming of Spring. I, too, have been experiencing such feelings and I keep wondering, time and again, how much longer it will be this way. I'm so heartsick and lonely for you that I could fly straight across the ocean in one large swoop for the privilege of clasping you to me. Spring, beautiful Spring - phooie!

The latter part of your letter deals with your response to my anniversary letter. I thought you sort of contradicted yourself on the sentimentalist situation. You said you didn't follow my reasoning that the Army made a sentimentalist out of you and that you wouldn't argue the point feeling I probably was right and that if you were it was due to catering to me in this direction. You then quoted me in connection with the surprising way you presented me with my first anniversary gift, and could not understand why I didn’t expect it of you. Silly, you admitted that you got that way catering to me, not to mention the Army, and then you want to know why I was surprised. I didn't at that time (and I'm hoping for a repeat performance on another anniversary), think you had it in you, but I guess you showed me, baby.

Our daughter, honey, is the wildest, roughest, toughest, two-gun kid I ever saw. Well, she's not really that way or that bad, but she is more so than any of the other kids I know. But I’m ahead of myself. I want to tell you about last night first.

As I told you in yesterday's v-mail, I spent the evening at Dot’s, making the trip mainly to pick up the wool she had purchased for me some time hence. I took "Kings Row" along with me and finished it. Adele was extremely difficult and it was late when I left the house. Adele will not go to sleep unless her “momma" is nearby. I left at 8 and walked along Rockland St. I missed a bus and decided to walk on to the subway. It was a cool evening and I enjoyed the walk, my thoughts being some odd 3000 miles away with my dearly beloved, who, I am quite sure, was fast asleep., I wore my blue wool dress with the dubonnet velvet collar, my dubonnet shoes and bag, dubonnet scarf and my beige sports coat. My sister gave me a large dubonnet velvet bow to wear in my hair. My blue dress has suddenly become very snug and one of the seams burst. Snuff noted this and said, "Look out, kid, you're getting fat!" I think it's the dress. I gave it to the cheap tailors and most everything shrinks a bit these days due to the inferior cleaning fluids.

I made good time, getting to the front door at precisely 8:45. Dot was alone, reading an excellent book called “Mrs. Heaton’s Daughter.” She told me a great deal about the story and let me read the more interesting passages. Shortly afterward Marcelle dropped in, then Snuff, with Shrimp (some combination), who was in on his first furlough since his entrance into the Army some five odd months ago. Then came Dot's Aunt and father, the last of the company. We talked and had refreshments and I had a thoroughly enjoyable time, leaving at 12, with Snuff to accompany me to the el.

I seated myself in the el and proceeded to read my book. I took up my reading again on the subway. Suddenly I became nauseous and had an almost uncontrollable urge to expectorate. I damn near fainted trying to control myself. All the while I forced my thoughts to you and our love. This sort of did the trick and my head cleared somewhat. I could scarcely wait til I got into the air to catch the Somerville bus at Broad and Allegheny. I guess I shouldn't read on moving vehicles for it does effect me that way. I felt much better once on the bus and didn't mind the short walk to the house. I hit the hay quickly and Adele obliged by sleeping through the night, with the exception of one interruption.

The wool is very nice and I haven't decided on a style or stitch just yet for any of the three. I know Adele’s will both be "button down the front" since she has two pullovers, the pink one and the peach angora I made some time ago. It came in hanks and I did some fancy rolling to get it all into neat balls of wool. Let you know more about this when I decide myself. I don't want anything exceptionally fancy.

My period is late again (first time since you left) and I never do feel well when it drags.

l completed my housework and spent most of the after noon at Anne’s. We kept the kids on the porch in the sun and looked after them. Adele only insisted on getting Richy into a stranglehold, throwing him over, pushing him around and whatnot. She crept behind one of the porch chairs and fell before I caught her, cutting her lip with her teeth. Shortly after I cleaned her up she banged her head on the stone of the porch. She doesn't walk - she runs. I can't trust her for a second alone, while both Dot and Anne think nothing of letting the kids walk beside them down the street. I wouldn't dare do that with Adele for she'd be in God's Country before I batted an eyelash. Phil if only you knew what a sore pain your absence leaves, especially in that connection. Phil, dear, I won't argue that she isn't good company but sometimes I wonder if it's all worth it, alone. There are too many suggestions from too many people on the "hows" and whys and wherefors. At least if you were here I wouldn't be so "tied down". I’m beginning to hate that more than anything. People

can't help commenting, "You have your entire family around you and yet you're so tied down". Besides this Adele has developed a habit of screaming at the

very top of her lungs if I do not stay in the bedroom til she has fallen asleep. I don't mind this devoted attachment, but it has some definitely bad points. If, perchance, I should not be here to put her to sleep, as in the case of Stuart's briss, she drives. everyone plain crazy. It's just like everything else, sweet, too much is not good. I've been dying to get into town for the past month to do a bit of shopping. No one would think of offering to care for her for a few hours when I suggest such a thing, unless I took it upon myself to force her upon them. My Mom takes care of her when I work and has to stay with my grandmother in the evening. Even my dad stayed on one occasion. Ruth gets paid a high price and takes care of kids almost daily, besides working at the 5 and 10. I've tried to amuse myself with dozens of things, but there are times when I feel it necessary for my peace of mind and health to get away from the house for a few hours. I know Mom isn't strong enough to care for Adele nor Goldie in a position to do so and I haven't the heart to force anyone to do anything. I love my baby and home above everything, except, of course, you, sweet, and, no doubt, if you were here, I wouldn't even care to go out, yet being in the house too much is like being in camp too much. Perhaps this will give you a clearer picture of why I want to return to work, if only for a short time, Tonight Adele started that infernal screaming shortly after I had placed her in bed - and I let her scream til she screamed herself to sleep. I always looked forward to that part of the day when Adele was freshly bathed, in her sleepers, and ready for bed, so that I might cuddle and love her and give vent to my feelings for her. However, I'll be darn if I'll put up with her actions if I cannot be present til she is sound asleep. I never liked it in In any other child and certainly not in my daughter.

Boy, I'm in a talkative mood this evening - shore nuff! And all in one letter! My mother is washing our clothes this, evening and I've got to lend a hand. Sorry, sweet, but I think I shall have to cut this short??? You don't think I've said enough? Well, and just for good measure, I'll tell you once more what I've always told you and always will tell you, - that I love you very dearly and hope that soon you will return to