Post #364 - May 12, 1944 You are Willing Enough to Learn Everything You Like, but Sometimes You Fail to be Practical and On the Dance Floor Klein is a Marvel of Rhythm 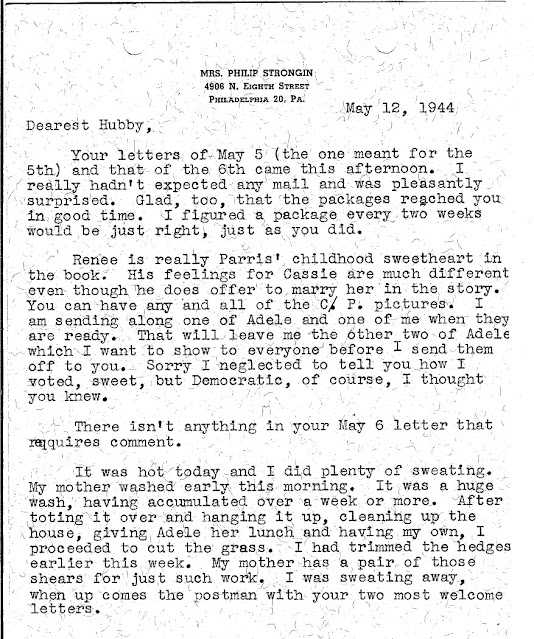 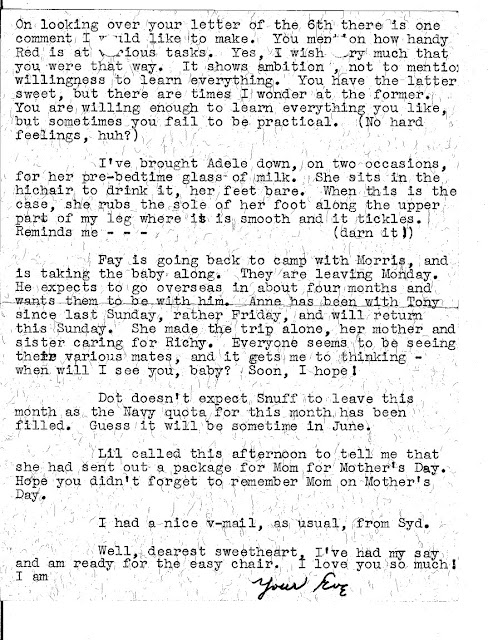 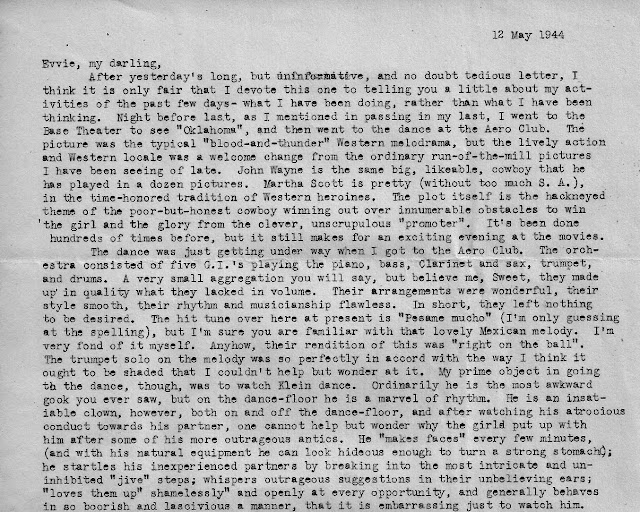 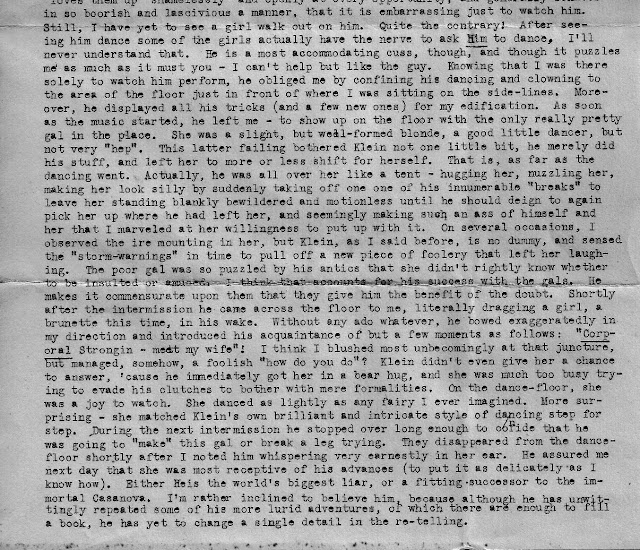 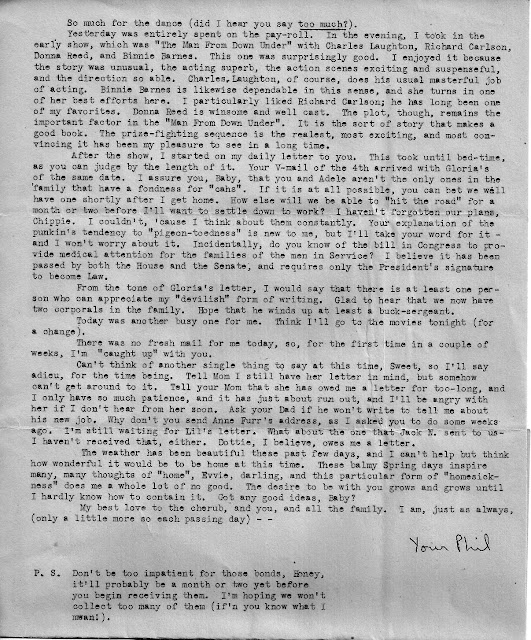 Your letters of May 5 (the one meant for the 5th) and that of the 6th came this afternoon. I really hadn't expected any mail and was pleasantly surprised. Glad, too, that the packages reached you in good time. I figured a package every two weeks would be just right, just as you did.

Renee is really Parris’ childhood sweetheart in the book. His feelings for Cassie are much different even though he does offer to marry her in the story. You can have any and all of the C. P. pictures. I am sending along one of Adele and one of me when they are ready. That will leave me the other two of Adele which I want to show to everyone before I send them off to you. Sorry I neglected to tell you how I, voted, sweet, but Democratic, of course, I thought you knew.

There isn't anything in your May 6 letter that requires comment.

It was hot today and I did plenty of sweating. My mother washed early this morning. It was a huge wash, having accumulated over a week or more. After toting it over and hanging it up, cleaning up the house, giving Adele her lunch and having my own, I proceeded to cut the grass. I had trimmed the hedges earlier this week. My mother has a pair of those shears for just such work. I was sweating away, when up comes the postman with your two most welcome letters.

On looking over your letter of the 6th there is one comment I would like to make. You mention how handy Red is at various tasks. Yes, I wish very much that you were that way. It shows ambition, not to mention willingness to learn everything. You have the latter, sweet, but there are times I wonder at the former. You are willing enough to learn everything you like, but sometimes you fail to be practical. (No hard feelings, huh?)

I've brought Adele down, on two occasions, for her pre-bedtime glass of milk. She sits in the hichair, to drink it, her feet bare. When this is the case, she rubs the sole of her foot along the upper part of my leg where it is smooth and it tickles. Reminds me " - - -  (darn it!)

Fay is going back to camp with Morris, and is taking the baby along. They are leaving Monday. He expects to go overseas in about four months and wants them to be with him. Anne has been with Tony since last Sunday, rather Friday, and will return this Sunday. She made the trip alone, her mother and sister caring for Richy." Everyone seems to be seeing their various mates, and it gets me to thinking -

when will I see you, baby? Soon, I hope!

Dot doesn't expect Snuff to leave this month as the Navy quota for this month has been filled. Guess it will be sometime in June.

Lil called this afternoon to tell me that she had sent out a package for Mom for Mother’s Day. Hope you didn't forget to remember Mom on Mother's Day.

I had a nice v-mail, as usual, from Syd.

Well, dearest sweetheart, I've had my say and am ready for the easy chair. I love you so much! I am

So much for the dance (did I hear you say too much?).

Yesterday was entirely spent on the pay-roll. In the evening, I took in the early show, which was "The Man From Down Under" with Charles Laughton, Richard Carlson, Donna Reed, and Binnie Barnes. This one was surprisingly good. I enjoyed it because the story was unusual, the acting superb, the action scenes exciting and suspenseful, and the direction so able. Charles, Laughton, of course, does his usual masterful job of acting. Binnie Barnes is likewise dependable in this sense, and she turns in one of her best efforts here, I particularly liked Richard Carlson; he has long been one of my favorites. Donna Reed is winsome and well cast. The plot, though, remains the important factor in the "Man From Down Under". It is the sort of story that makes a good book. The prize-fighting sequence is the realest, most exciting, and most convincing it has been my pleasure to see in a long time.

After the show, I started on my daily letter to you. This took until bed-time, as you can judge by the length of it. Your V-mail of the 4th arrived with Gloria's of the same date. I assure you, Baby, that you and Adele aren't the only ones in the family that have a fondness for "cahs". If it is at all possible, you can bet we will have one shortly after I get hone. How else will we be able to "hit the road" for a month or two before I’ll want to settle down to work? I haven't forgotten our plans, Chippie. I couldn't, 'cause I think about them constantly. Your explanation of the punkin's tendency to "pigeon-toedness" is new to me, but I'll take your word for it - and I won't worry about it, Incidentally, do you know of the bill in Congress to provide medical attention for the families of the men in Service? I believe it has been passed by both the House and the Senate, and requires only the President's signature to become Law,

From the tone of Gloria's letter, I would say that there is at least one person who can appreciate my "devilish" form of writing. Glad to hear that we now have two corporals in the family. Hope that he winds up at least a buck-sergeant.

Today was another busy one for me. Think I'll go to the movies tonight (for a change).

There was no fresh mail for me today, so, for the first time in a couple of weeks, I'm "caught up" with you,

Can't think of another single thing to say at this time, Sweet, so I'll say adieu, for the time being. Tell Mom I still have her letter in mind, but somehow can't get around to it. Tell your Mom that she has owed me a letter for too-long, and I only have so much patience, and it has just about run out, and I'll be angry with her if I don't hear from her soon. Ask your Dad if he won't write to tell me about his new job. Why don't you send Anne Furr's address, as I asked you to do some weeks ago. I'm still waiting for Lil's letter. What about the one that Jack N, sent to us? I haven't received that, either. Dottie, I believe, owes me a letter,

The weather has been beautiful these past few days, and I can't help but think how wonderful it would be to be home at this time. These balmy Spring days inspire many, many thoughts of "home", Evvie, darling, and this particular form of "homesickness" does me a whole lot of no good. The desire to be with you grows and grows until I hardly know how to contain it. Got any good ideas, Baby?

My best love to the cherub, and you, and all the family. I am, just as always, (only a little more so each passing day) - -

P. S. Don't be too impatient for those bonds, Honey, it'll probably be a month or two yet before you begin receiving them. I'm hoping we won't collect too many of them (if'n you know what I mean!).