Post #370 - May 19, 1944 Gloria had a Glamour Portrait Made and You Aren’t the Only One Whose Sleep is Interrupted 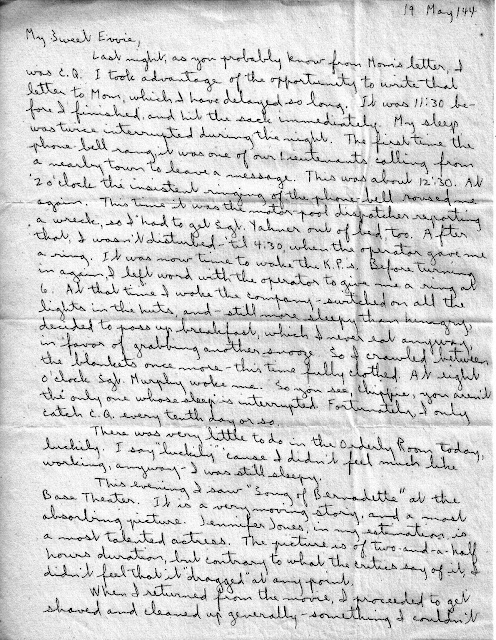 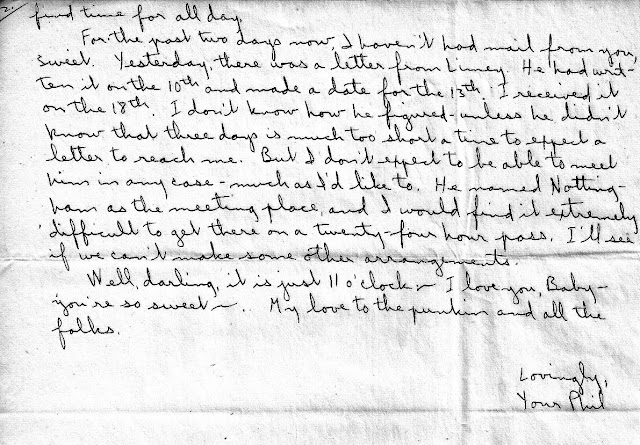 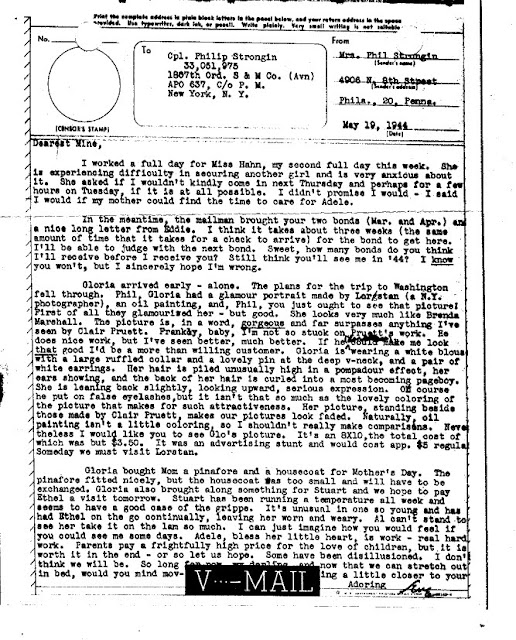 I worked a full day for Miss Hahn, my second full day this week. She is experiencing difficulty in securing another girl and is very anxious about it. She asked if I wouldn't kindly come in next Thursday and perhaps for a few hours on Tuesday, if it is at all possible. I didn't promise I would. I said I would if my mother could find the time to care for Adele.

In the meantime, the mailman brought your two bonds (Mar. and Apr.) and a nice long letter from Eddie. I think it takes about three weeks (the same amount of time that it takes for a check to arrive) for the bond to get here. I'll be able to judge with the next bond. Sweet, how many bonds do you think I'll receive before I receive you? Still think you'll see me in ’44? I know you won't, but I sincerely hope I'm wrong.

Gloria arrived early - alone. The plans for the trip to Washington fell through. Phil, Gloria had a glamour portrait made by Lorstan (a N.Y. photographer), an oil painting, and, Phil, you just ought to see that picture! First of all, they glamourized her - but good. She looks very much like Brenda Marshall. The picture is, in a word, gorgeous and far surpasses anything I've seen by Clair Pruett. Frankly, baby, I'm not so stuck on Pruett's work. He does nice work, but I've seen better, much better. If he (Lorstan) could make me look that good I'd be a more than willing customer. Gloria is wearing a white blouse with a large ruffled collar and a lovely pin at the deep v-neck, and a pair of white earrings. Her hair is styled unusually high in a pompadour effect, her ears showing, and the back of her hair is curled into a most becoming pageboy. She is leaning back slightly, looking upward, serious expression. Of course he put on false eyelashes, but it isn't that so much as the lovely coloring of the picture that makes for such attractiveness. Her picture, standing beside those made by Clair Pruett, makes our pictures look faded. Naturally, oil painting isn't a little coloring, so I shouldn't really make comparisons. Nevertheless, I would like you to see Glo’s picture. It's an 8 x 10, the total cost of which was but $3.50. It was an advertising stunt and would cost approximately $5 regular. Someday we must visit Lorstan.

Gloria bought Mom a pinafore and a housecoat for Mother's Day. The pinafore fitted nicely, but the housecoat was too small and will have to be exchanged. Gloria also brought along something for Stuart and we hope to pay Ethel a visit tomorrow. Stuart has been running a temperature all week and seems to have a good case of the grippe. It's unusual in one so young and has had Ethel on the go continually, leaving her worn and weary. Al can't stand to see her take it on the lam so much. I can just imagine how you would feel if you could see me some days. Adele, bless her little heart is work - real hard work. Parents pay a frightfully high price for the love of children, but it is worth it in the end - or so let us hope. Some have been disillusioned. I don't think we will be. So long for now, my darling, and now that we can stretch out in bed, would you mind moving a little closer to your

Last night, as you probably know from Mom’s letter, I was CQ. I took advantage of the opportunity to write that letter to Mom, which I have delayed so long. It was 11:30 before I finished and hit the sack immediately. My sleep was twice interrupted during the night. The first time the phone bell rang, it was one of our lieutenants calling from a nearby town to leave a message. This was about 12:30. At 2 o'clock. the insistent ringing of the phone bell roused me again. This time it was the motor pool dispatcher reporting a wreck, so I had to get Sgt. Yahner out of bed, too. After that I wasn't disturbed—’til 4:30, when the operator gave me a ring. It was now time to wake the K.P.’s. Before turning in again, I left word with the operator to give me a ring at 6. At that time I woke the company—switched on all the lights in the huts, and—still more sleepy than hungry, decided to pass up breakfast, which I never eat anyway, in favor of grabbing another snooze. So I crawled between the blankets once more—this time fully clothed. At eight o'clock Sgt. Murphy woke me. So you see, Chippie, you aren't the only one whose sleep is interrupted. Fortunately, I only catch CQ every tenth day or so.

There was very little to do in the Orderly Room today, luckily. I say “luckily” ’cause I didn't feel much like working, anyway—I was still sleepy.

This evening I saw “Song of Bernadette” at the Base Theater. It is a very moving story and a most absorbing picture. Jennifer Jones, in my estimation, is a most talented actress. The picture is of two-and-a-half hours duration, but contrary to what the critics say of it, I didn't feel that it dragged at any point.

When I returned from the movie, I proceeded to get shaved and cleaned up generally—something I couldn't find time for all day.

For the past two days now, I haven't had mail from you, Sweet. Yesterday, there was a letter from Limey. He had written it on the 10th and made the date for the 13th. I received it on the 18th. I don't know how he figured—unless he didn't know that three days is much too short a time to expect the letter to reach me. But I don't expect to be able to meet him in any case, much as I'd like to. He named Nottingham as the meeting place, and I would find it extremely difficult to get there on a twenty-four hour pass. I'll see if we can’t make some other arrangements.

Well, darling, it is just 11 o'clock—I love you, Baby—you're so sweet—. My love to the punkin and all the folks.

Lovingly,
Your Phil
Posted by Marilyn at 1:35 PM