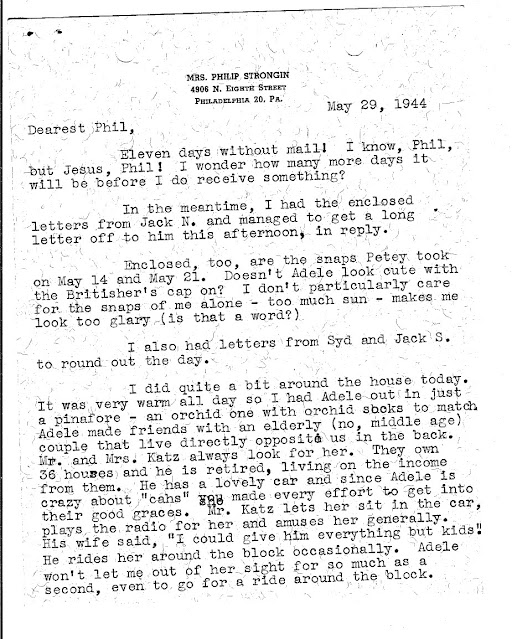 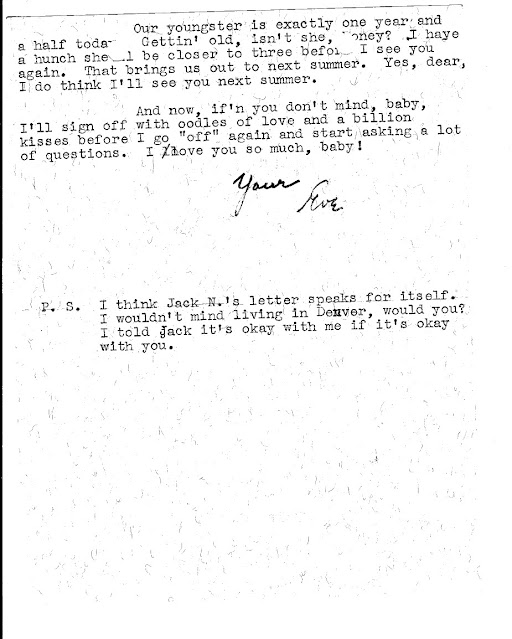 Eleven days without mail! I know, Phil, but Jesus, Phil! I wonder how many more days it will be before I do receive something?

In the meantime, I had the enclosed letters from Jack N. and managed to get a long letter off to him this afternoon, in reply.

Enclosed, too, are the snaps Petey took on May 14 and May 21. Doesn't Adele look cute with the Britisher's cap on? I don't particularly care for the snaps of me alone -too much sun - makes me look too glary (is that a word?)

I also had letters from Syd and Jack S. to round out the day.

I did quite a bit around the house today. It was very warm all day so I had Adele out in just a pinafore - an orchid one with orchid socks to match. Adele made friends with an elderly (no, middle age) couple that live directly opposite us in the back. Mr. and Mrs. Katz always look for her. They own 36 houses, and he is retired, living on the income from them. He has a lovely car and since Adele is crazy about "cahs" she made every effort to get into their good graces. Mr. Katz lets her sit in the car, plays the radio for her and amuses her generally. His wife said, "I could give him everything but kids!” He rides her around the block occasionally. Adele won't let me out of her sight for so much as a second, even to go for a ride around the block.

Our youngster is exactly one year and a half today. Gettin' old, isn't she, Honey? I have a hunch she be closer to three before I see you again. That brings us out to next summer. Yes, dear, I do think I'll see you next summer.

And now, if’n you don't mind, baby, I'll sign off with oodles of love and a billion . kisses before I go "off" again and start asking a lot of questions. I love you so much, baby!