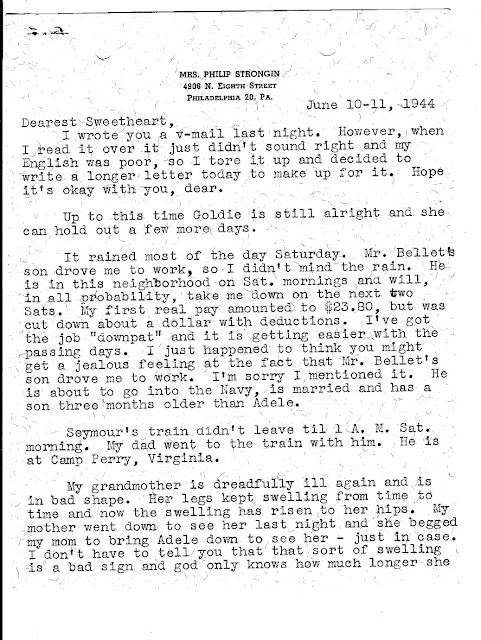 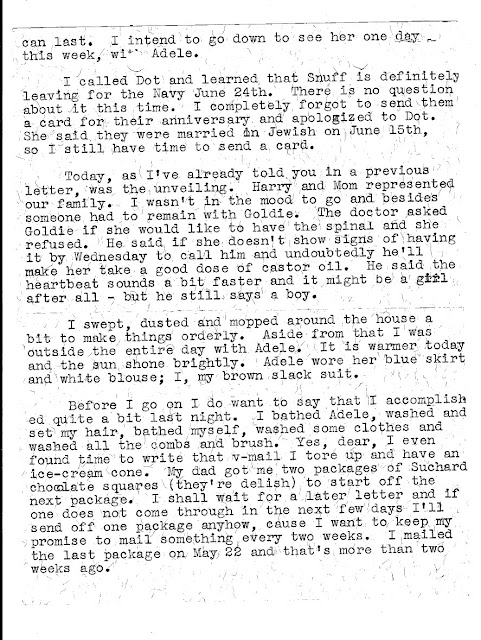 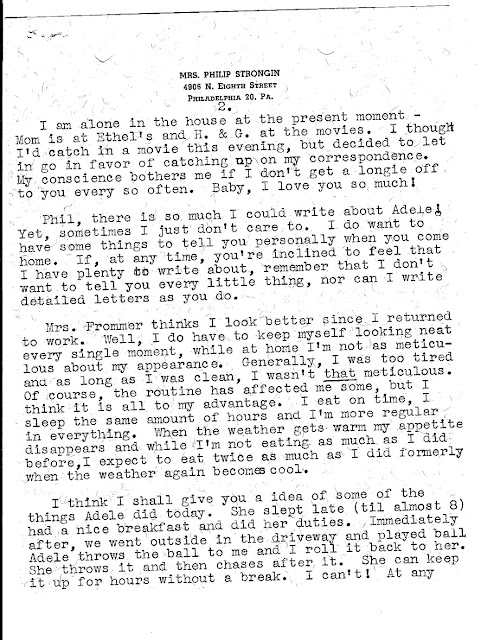 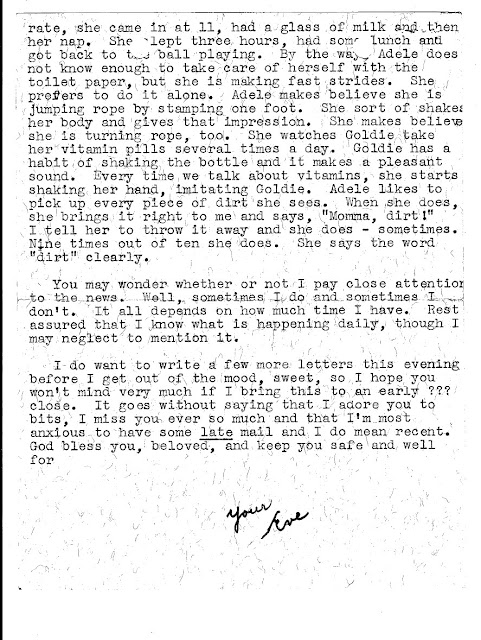 I wrote you a v-mail last night. However, when I read it over it just didn't sound right and my English was poor, so I tore it up and decided to write a longer letter today to make up for it. Hope it's okay with you, dear.

Up to this time Goldie is still alright and she can hold out a few more days.

It rained most of the day Saturday. Mr. Bellet’s son drove me to work, so I didn’t mind the rain. He is in this neighborhood on Sat. mornings and will, in all probability, take me down on the next two Sats. My first real pay amounted to $23.80, but was cut down about a dollar with deductions. I've got the job "downpat” and it is getting easier with the passing days. I just happened to think you might get a jealous feeling at the fact that Mr. Bellet’s son drove me to work. I'm sorry I mentioned it. He is about to go into the Navy, is married and has a son three months older than Adele.

Seymour's train didn't leave til 1 A. M. Sat. morning. My dad went to the train with him. He is at Camp Perry, Virginia.

My grandmother is dreadfully ill again and is is in bad shape. Her legs kept swelling from time to time and now the swelling has risen to her hips. My mother went down to see her last night and she begged my mom to bring Adele down to see her - just in case. I don't have to tell you that that sort of swelling is a bad sign and god only knows how much longer she can last. I intend to go down to see her one day this week, with Adele.

I called Dot and learned that Snuff is definitely leaving for the Navy June 24th. There is no question about it this time. I completely forgot to send them a card for their anniversary and apologized to Dot. She said they were married in Jewish on June 15th, so I still have time to send a card.

Today, as I've already told you in a previous letter, was the unveiling. Harry and Mom represented our family. I wasn't in the mood to go and besides someone had to remain with Goldie. The doctor asked Goldie if she would like to have the spinal and she refused. He said if she doesn't show signs of having it by Wednesday to call him and undoubtedly he'll make her take a good dose of castor oil. He said the heartbeat sounds a bit faster and it might be a girl after all - but he still says a boy.

I swept, dusted and mopped around the house a bit to make things orderly. Aside from that I was outside the entire day with Adele. It is warmer today and the sun shone brightly. Adele wore her blue skirt and white blouse; I, my brown slack suit.

Before I go on I do want to say that I accomplished quite a bit last night. I bathed Adele, washed and set my hair, bathed myself, washed some clothes and washed all the combs and brush. Yes, dear, I even found time to write that v-mail I tore up and have an ice-cream cone, My dad got me two packages of Suchard chocolate squares (they're delish) to start off the next package. I shall wait for a later letter and if one does not come through in the next few days I'll send off one package anyhow, cause I want to keep my promise to mail something every two weeks. I mailed the last package on May 22 and that's more than two weeks ago.

I am alone in the house at the present moment - Mom is at Ethel’s and H. & G. at the movies. I thought I’d catch in a movie this evening, but decided to let it go in favor of catching up on my correspondence, My conscience bothers me if I don’t get a longie off to you every so often. Baby, I love you so much!

Phil, there is so much I could write about Adele! Yet, sometimes I just don't care to. I do want to have some things to tell you personally when you come home. If, at any time, you're inclined to feel that I have plenty to write about, remember that I don't want to tell you every little thing, nor can I write detailed letters as you do.

Mrs. Frommer thinks I look better since I returned to work. Well, I do have to keep myself looking neat every single moment. While at home, I'm not as meticulous about my appearance. Generally, I was too tired and as long as I was clean, I wasn't that meticulous. Of course, the routine has affected me some, but I think it is all to my advantage. I eat on time, I sleep the same amount of hours and I'm more regular in everything. When the weather gets warm my appetite disappears and while I'm not eating as much as I did before, I expect to eat twice as much as I did formerly when the weather again becomes cool.

I think I shall give you an idea of some of the things Adele did today. She slept late. (til almost 8) had a nice breakfast and did her duties. Immediately after, we went outside in the driveway and played ball. Adele throws the ball to me and I roll it back to her. She throws it and then chases after it. She can keep it up for hours without a break. I can't! At any rate, she came in at 11, had a glass of milk and then her nap. She slept three hours, had some lunch and got back to the ball playing. By the way, Adele does not know enough to take care of herself with the toilet paper, but she is making fast strides. She prefers to do it alone. Adele makes believe she is jumping rope by stamping one foot. She sort of shakes her body and gives that impression. She makes believe she is turning rope, too. She watches Goldie take her vitamin pills several times a day. Goldie has a habit of shaking the bottle and it makes a pleasant sound. Every time we talk about vitamins, she starts shaking her hand, imitating Goldie. Adele likes to pick up every piece of dirt she sees. When she does, she brings it right to me and says, "Momma, dirt!" I tell her to throw it away and she does - sometimes. Nine times out of ten she does. She says the word "dirt" clearly.

You may wonder whether or not. I pay close attention to the news. Well, sometimes I do and sometimes I don't. It all depends on how much time I have. Rest assured that I know what is happening daily, though I may neglect to mention it.

I do want to write a few more letters this evening before I get out of the mood, sweet, so I hope you won't mind very much if I bring this to an early ??? close. It goes without saying that I adore you to bits. I miss you ever so much and that I'm most anxious to have some late mail and I do mean recent. God bless you, beloved, and keep you safe and well for