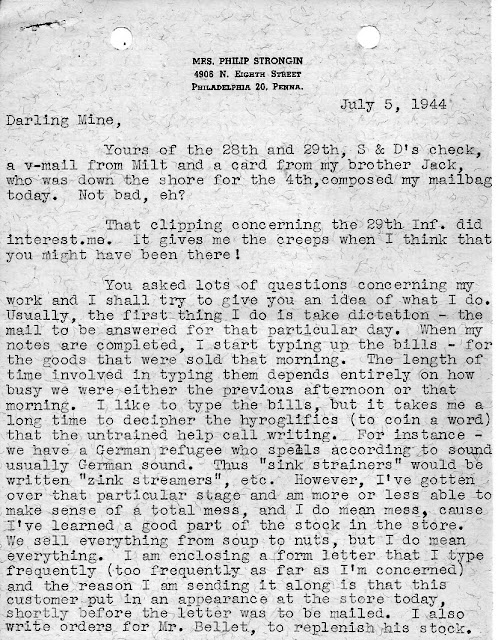 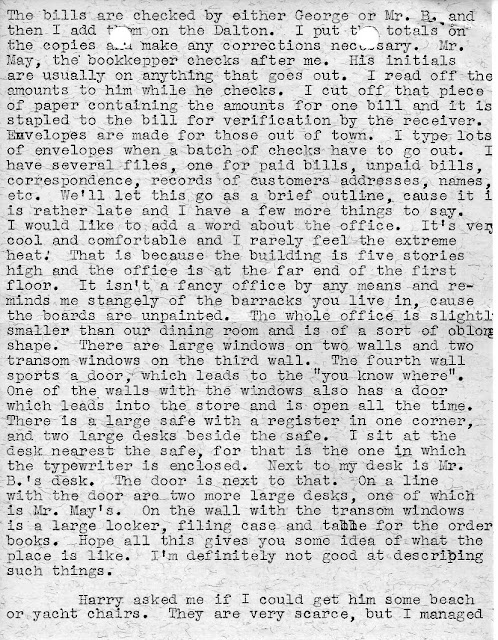 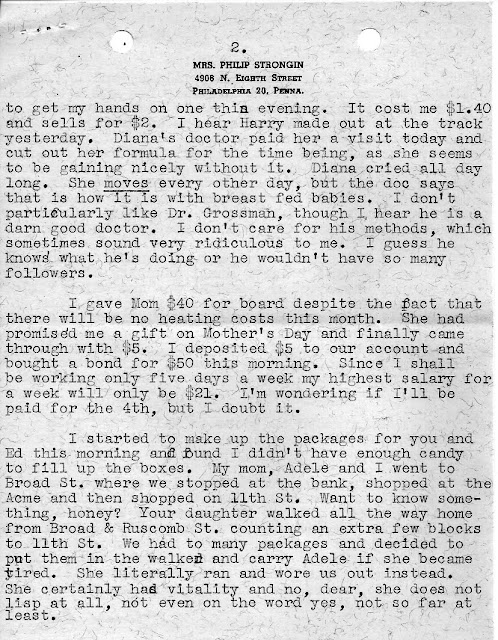 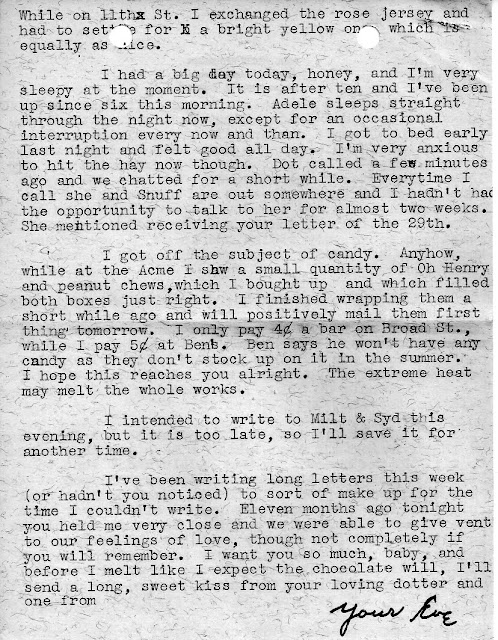 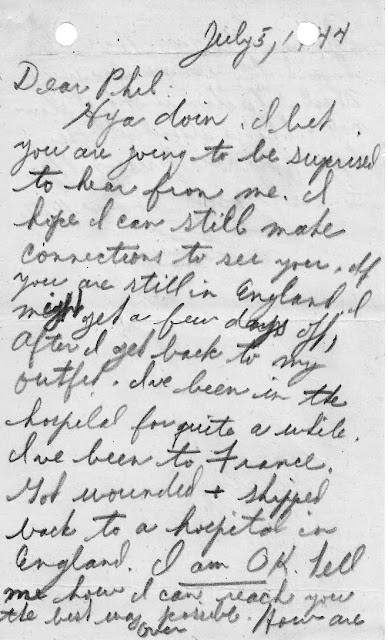 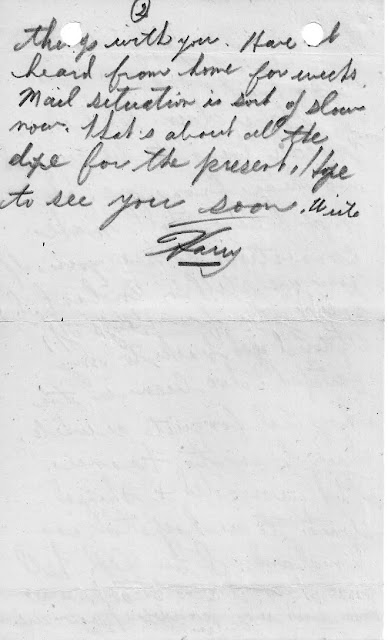 Yours of the 28th and 29th, S & D’s check [Sharpe & Dohme], a v-mail from Milt and a card from my brother Jack, who was down the shore for the 4th, composed my mailbag today. Not bad, eh?

That clipping concerning the 29th Inf. did interest me. It gives me the creeps when I think that you might have been there!

You asked lots of questions concerning my work and I shall try to give you an idea of what I do. Usually, the first thing I do is take dictation - the mail to be answered for that particular day. When my notes are completed, I start typing up the bills - for the goods that were sold that morning. The length of time involved in typing them depends entirely on how busy we were either the previous afternoon or that morning. I like to type the bills, but it takes me a long time to decipher the hyroglifics (to coin a word) that the untrained help call writing. For instance - we have a German refugee who spells according to sound - usually German sound. Thus "sink strainers" would be written "zink streamers", etc. However, I've gotten over that particular stage and am more or less able to make sense of a total mess, and I do mean mess, cause I've learned a good part of the stock in the store. We sell everything from soup to nuts, but I do mean everything. I am enclosing a form letter that I type frequently (too frequently as far as I'm concerned) and the reason I am sending it along is that this customer put in an appearance at the store today, shortly before the letter was to be mailed. I also write orders for Mr. Bellet, to replenish his stock.

The bills are checked by either George or Mr. B. and then I add them on the Dalton. I put the totals on the copies and make any corrections necessary. Mr. May, the bookkeeper checks after me. His initials are usually on anything that goes out, I read off the amounts to him while he checks. I cut off that piece of paper containing the amounts for one bill and it is stapled to the bill for verification by the receiver. Envelopes are made for those out of town. I type lots of envelopes when a batch of checks have to go out. I have several files, one for paid bills, unpaid bills, correspondence, records of customers addresses, names, etc. We'll let this go as a brief outline, cause it is rather late and I have a few more things to say. I would like to add a word about the office. It's very cool and comfortable and I rarely feel the extreme heat. That is because the building is five stories high and the office is at the far end of the first floor. It isn't a fancy office by any means and reminds me strangely of the barracks you live in, cause the boards are unpainted. The whole office is slightly smaller than our dining room and is of a sort of oblong shape. There are large windows on two walls and two transom windows on the third wall. The fourth wall sports a door, which leads to the "you know where". One of the walls with the windows also has a door which leads into the store and is open all the time. There is a large safe with a register in one corner, and two large desks beside the safe. I sit at the desk nearest the safe, for that is the one in which the typewriter is enclosed. Next to my desk is Mr. B.'s desk. The door is next to that. On a line with the door are two more large desks, one of which is Mr. May's. On the wall with the transom windows is a large locker, filing case and table for the order books. Hope all this gives you some idea of what the place is like. I'm definitely not good at describing such things.

Harry asked me if I could get him some beach or yacht chairs, They are very scarce, but I managed to get my hands on one this evening. It cost me $1.40 and sells for $2. I hear Harry made out at the track yesterday. Diana's doctor paid her a visit today and cut out her formula for the time being, as she seems to be gaining nicely without it. Diana cried all day long. She moves every other day, but the doc says that is how it is with breast fed babies. I don't particularly like Dr. Grossman, though I hear he is a darn good doctor. I don't care for his methods, which sometimes sound very ridiculous to me. I guess he knows what he's doing or he wouldn't have so many followers.

I gave Mom $40 for board despite the fact that there will be no heating costs this month. She had promised me a gift on Mother's Day and finally came through with $5. I deposited $5 to our account and bought a bond for $50 this morning. Since I shall be working only five days a week my highest salary for a week will only be $21. I'm wondering if I'll be paid for the 4th, but I doubt it.

I started to make up the packages for you and Ed this morning and found I didn't have enough candy to fill up the boxes. My mom, Adele and I went to Broad St. where we stopped at the bank, shopped at the Acme and then shopped on 11th St. Want to know some thing, honey? Your daughter walked all the way home from Broad & Ruscomb St. counting an extra few blocks to 11th St. We had too many packages and decided to put them in the walker and carry Adele if she became tired. She literally ran and wore us out instead. She certainly has vitality and no, dear, she does not lisp at all, not even on the word yes, not so far at least.

While on 11th St. I exchanged the rose jersey and had to settle for a bright yellow one which is equally as nice.

I had a big day today, honey, and I'm very sleepy at the moment. It is after ten and I've been up since six this morning. Adele sleeps straight through the night now, except for an occasional interruption every now and then, I got to bed early last night and felt good all day. I'm very anxious to hit the hay now though. Dot called a few minutes ago and we chatted for a short while. Every time I call she and Snuff are out somewhere and I hadn't had the opportunity to talk to her for almost two weeks. She mentioned receiving your letter of the 29th.

I got off the subject of candy. Anyhow, while at the Acme I saw a small quantity of Oh Henry and peanut chews, which I bought up and which filled both boxes just right. I finished wrapping them a short while ago and will positively mail them first thing tomorrow. I only pay 4¢ a bar on Broad St., while I pay 5¢ at Ben’s. Ben says he won't have any candy as they don't stock up on it in the summer. I hope this reaches you alright. The extreme heat may melt the whole works.

I intended to write to Milt & Syd this evening, but it is too late, So I'll save it for another time.

I've been writing long letters this week (or hadn't you noticed) to sort of make up for the time I couldn't write. Eleven months ago tonight you held me very close and we were able to give vent to our feelings of love, though not completely if you will remember, I want you so much, baby, and before I melt like I expect the chocolate will, I'll send a long, sweet kiss from your loving dotter and one from

Your Eve
July 5, 1944
Dear Phil:
Hya doin. I bet you are going to be surprised to hear from me. I hope I can still make connections to see you if you are still in England. I might get a few days off, after I get back to my outfit. I’ve been in the hospital for quite a while. I’ve been to France. Got wounded and shipped back to a hospital in England. I am O.K. Tell me how I can reach you the best way possible. How are things with you. Haven’t heard from home for weeks. Mail situation is sort of slow now. That’s about all the dope the the present. Hope to see you soon. Write
Harry
Posted by Marilyn at 1:09 PM