Post #421 - July 24, 1944 We Haven’t Had Mail from Eddie for Several Weeks and I Have a Funny Fear About Him and They Have Installed a Real Honest-to-God Soda-Fountain in the Snack Bar, and I Got Homesick Just Looking at It 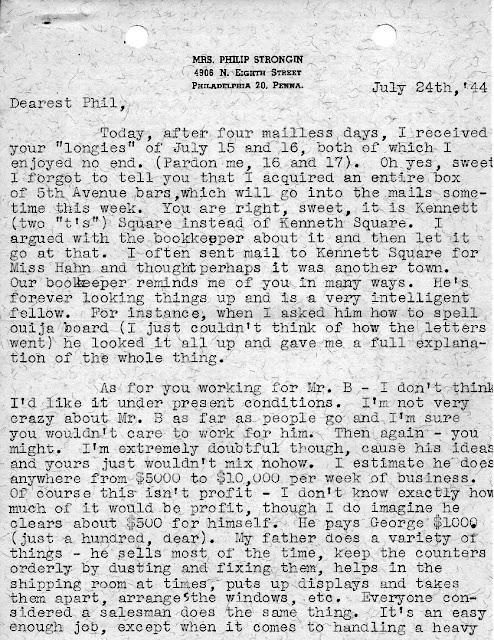 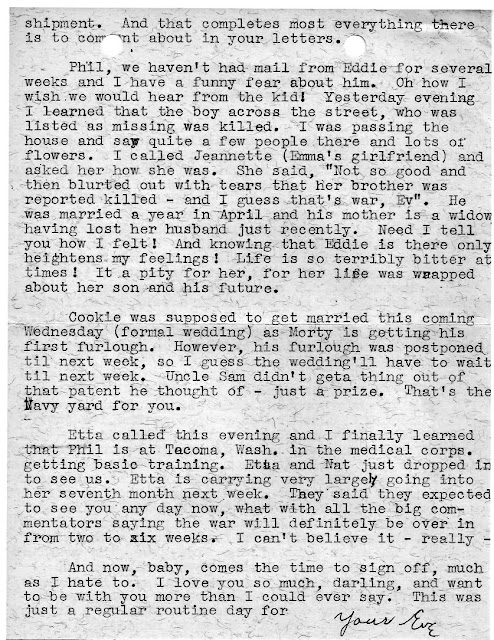 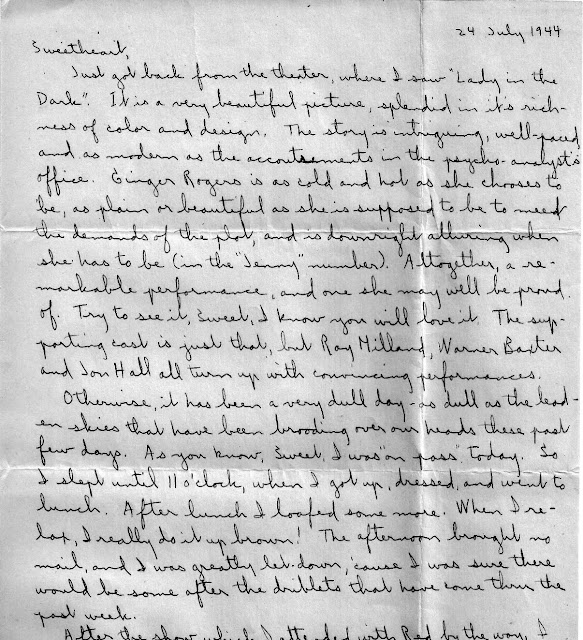 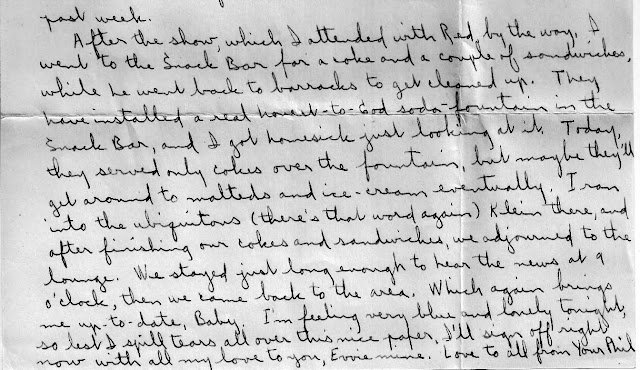 Today, after four mailless days, I received your "longies" of July 15 and 16, both of which I enjoyed no end. (Pardon me, 16 and 17). Oh yes, sweet, I forgot to tell you that I acquired an entire box of 5th Avenue bars, which will go into the mails some time this week. You are right, sweet, it is Kennett (two "t's") Square instead of Kenneth Square. I argued with the bookkeeper about it and then let it go at that. I often sent mail to Kennett Square for Miss Hahn and thought perhaps it was another town. Our bookkeeper reminds me of you in many ways. He's forever looking things up and is a very intelligent fellow. For instance, when I asked him how to spell ouija board (I just couldn't think of how the letters went) he looked it all up and gave me a full explanation of the whole thing.

As for you working for Mr. B - I don't think - I’d like it under present conditions. I'm not very crazy about Mr. B as far as people go and I'm sure you wouldn't care to work for him. Then again - you might. I'm extremely doubtful, though, cause his ideas and yours just wouldn't mix nohow. I estimate he does anywhere from $5000 to $10,000 per week of business. Of course this isn't profit - I don't know exactly how much of it would be profit, though I do imagine he clears about $500 for himself. He pays George $100.0 (just a hundred, dear). My father does a variety of things - he sells most of the time, keep the counters orderly by dusting and fixing them, helps in the shipping room at times, puts up displays and takes them apart, arranges the windows, etc. Everyone considered a salesman does the same thing. It's an easy enough job, except when it comes to handling a heavy shipment. And that completes most everything there is to comment about in your letters.

Phil, we haven't had mail from Eddie for several weeks and I have a funny fear about him. Oh how I wish we would hear from the kid! Yesterday evening I learned that the boy across the street, who was listed as missing was killed. I was passing the house and saw quite a few people there and lots or flowers. I called Jeannette (Emma's girlfriend) and asked her how she was. She said, "Not so good and then blurted out with tears that her brother was reported killed - and I guess that's war, Ev". He was married a year in April and his mother is a widow having lost her husband just recently. Need I tell you how I felt! And knowing that Eddie is there only heightens my feelings! Life is so terribly bitter at times! It’s a pity for her, for her life was wrapped about her son and his future.

Cookie was supposed to get married this coming Wednesday (formal wedding) as Morty is getting his first furlough. However, his furlough was postponed til next week, so I guess the wedding'll have to wait til next week, Uncle Sam didn't get a thing out of that patent he thought of - just a prize. That's the Navy yard for you.

Etta called this evening and I finally learned that Phil is at Tacoma, Wash. in the medical corps. getting basic training. Etta and Nat just dropped in to see us. Etta is carrying very largely going into her seventh month next week. They said they expected to see you any day now, what with all the big commentators saying the war will definitely be over in from two to six weeks. I can't believe it - really –

And now, baby, comes the time to sign off, much as I hate to. I love you so much, darling, and want to be with you more than I could ever say. This was just a regular routine day for

Just got back from the theater, where I saw "Lady in the Dark". It is a very beautiful picture, splendid in its richness of color and design. The story is intriguing, well-paced and as modern as the accoutrements in the psycho-analysts office. Ginger Rogers is as cold and hot as she chooses to be, as plain or beautiful as she is supposed to be to meet the demands of the plot, and is downright alluring when she has to be (in the "Jenny” number). Altogether, a remarkable performance, and one she may will be proud of. Try to see it, Sweet, I know you will love it. The supporting cast is just that, but Ray Milland, Warner Baxter and Jon Hall all turn up with convincing performances.

Otherwise, it has been a very dull day—as dull as the leaden skies that have been brooding over our heads these past few days. As you know, Sweet, I was “on pass” today. So I slept until 11 o'clock, when I got up, dressed, and went to lunch. After lunch I loafed some more. When I relax I really do it up brown! The afternoon brought no mail, and I was greatly let-down, ’cause I was sure there would be some after the driblets that have come thru the past week.

After the show, which I attended with Red, by the way, I went to the Snack Bar for a coke and a couple of sandwiches while he went back to barracks to get cleaned up. They have installed a real honest-to-God soda-fountain in the Snack Bar, and I got homesick just looking at it. Today, they served only cokes over the fountain, but maybe they’ll get around to malteds and ice-cream eventually. I ran into the ubiquitous (there's that word again) Klein there, and after finishing our cokes and sandwiches, we adjourned to the lounge. We stayed just long enough to hear the news at 9 o'clock, then we come back to the area. Which again brings me up-to-date, Baby, I'm feeling very blue and lonely tonight, so lest I spill tears, all over this nice paper, I'll sign off now with all my love to you, Evvie mine. Love to all from
Your Phil
Posted by Marilyn at 8:05 AM