Post #433 - August 7, 8, 1944 There is a Soldier in Full Battle Dress on Guard in Every Single Bus, Subway, El, Trolley and What Have You and It Gives Me the Creeps and A V-Mail from Dot Cohen 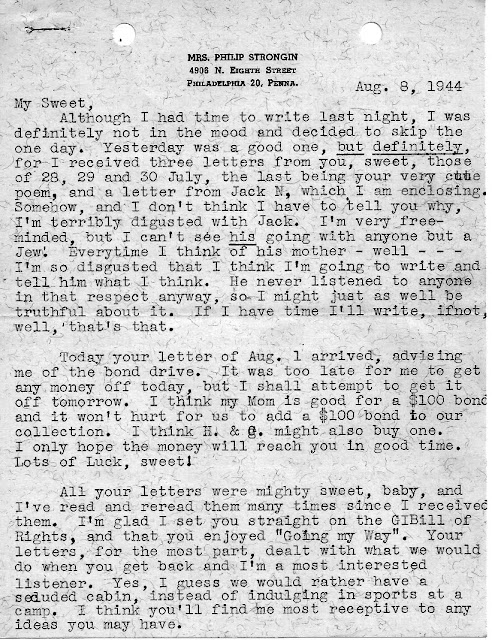 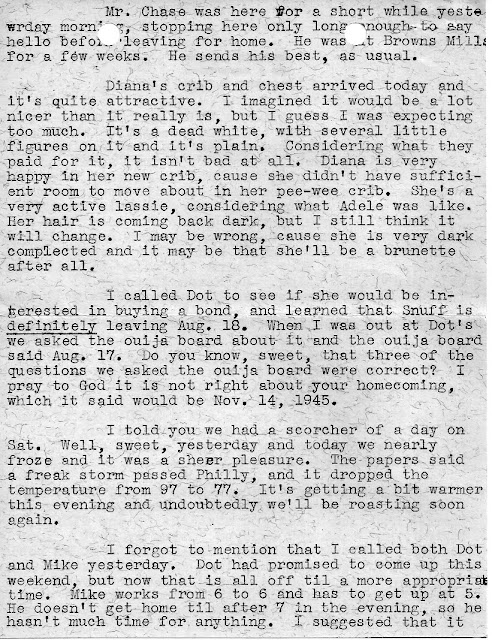 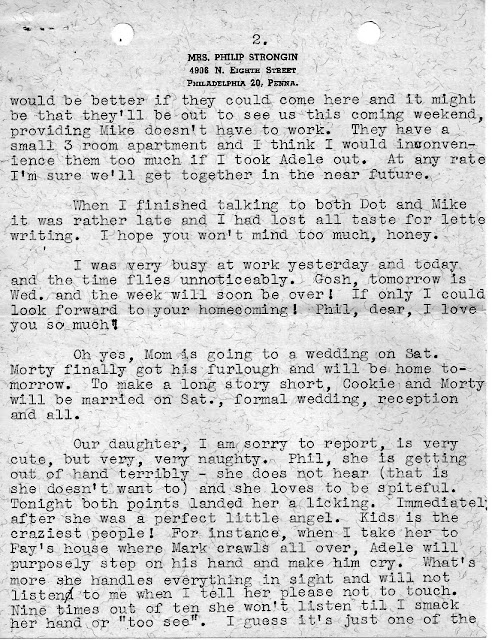 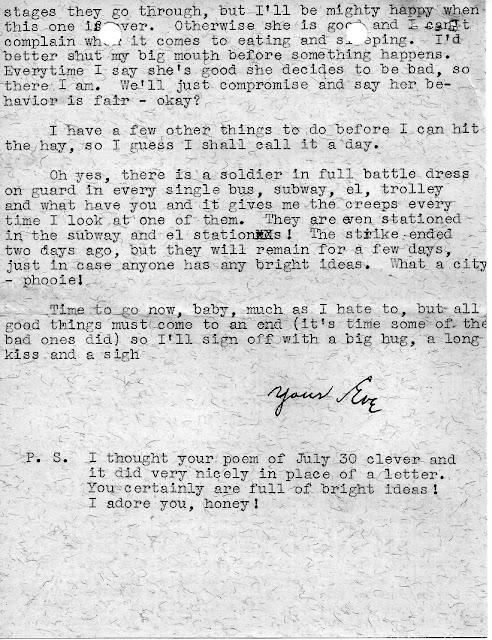 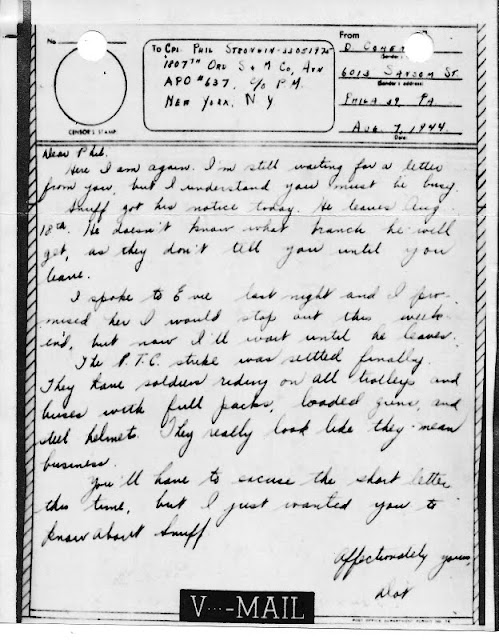 Although I had time to write last night, I was definitely not in the mood and decided to skip the one day. Yesterday was a good one, but definitely, for I received three letters from you, sweet, those of 28, 29 and 30 July, the last being your very cute poem, and a letter from Jack N. which I am enclosing. Somehow, and I don't think I have to tell you why, I’m terribly disgusted with Jack. I'm very free-minded, but I can't see his going with anyone but a Jew! Every time I think of his mother - well - - - I'm so disgusted that I think I'm going to write and tell him what I think. He never listened to anyone in that respect anyway, so I might just as well be truthful about it. If I have time I'll write, if not, well, that's that.

Today your letter of Aug. 1 arrived, advising me of the bond drive. It was too late for me to get any money off today, but I shall attempt to get it off tomorrow. I think my Mom is good for a $100 bond and it won't hurt for us to add a $100 bond to our collection. I think H. & G. might also buy one. I only hope the money will reach you in good time. Lots of Luck, sweet!

All your letters were mighty sweet, baby, and I've read and reread them many times since I received them. I'm glad I set you straight on the G.I. Bill of Rights, and that you enjoyed "Going My Way". Your letters, for the most part, dealt with what we would do when you get back and I'm a most interested listener. Yes, I guess we would rather have a secluded cabin, instead of indulging in sports at a camp. I think you'll find me most receptive to any ideas you may have.

Mr. Chase was here for a short while yesterday morning, stopping here only long enough to say hello before leaving for home. He was at Browns Mills for a few weeks. He sends his best, as usual.

Diana's crib and chest arrived today and it's quite attractive. I imagined it would be a lot nicer than it really is, but I guess I was expecting too much. It's a dead white, with several little figures on it and it's plain. Considering what they paid for it, it isn't bad at all. Diana is very happy in her new crib, cause she didn't have sufficient room to move about in her pee-wee crib. She's a very active lassie, considering what Adele was like. Her hair is coming back dark, but I still think it will change. I may be wrong, cause she is very dark complected and it may be that she'll be a brunette after all.

I told you we had a scorcher of a day on Sat. Well, Sweet, yesterday and today we nearly froze and it was a sheer pleasure. The papers said a freak storm passed Philly, and it dropped the temperature from 97 to 77. It's getting a bit warmer this evening and undoubtedly we'll be roasting soon again.

I forgot to mention that I called both Dot and Mike yesterday. Dot had promised to come up this weekend, but now that is all off til a more appropriate time. Mike works from 6 to 6 and has to get up at 5. He doesn't get home til after 7 in the evening, so he hasn't much time for anything. I suggested that it would be better if they could come here and it might be that they'll be out to see us this coming weekend, providing Mike doesn't have to work. They have a small 3 room apartment and I think I would inconvenience them too much if I took Adele out. At any rate I'm sure we'll get together in the near future.

When I finished talking to both Dot and Mike it was rather late and I had lost all taste for letter writing. I hope you won't mind too much, honey.

I was very busy at work yesterday and today and the time flies unnoticeably. Gosh, tomorrow is Wed, and the week will soon be over! If only I could look forward to your homecoming! Phil, dear, I love you so much!

Oh yes, Mom is going to a wedding on Sat. Morty finally got his furlough and will be home tomorrow. To make a long story short, Cookie and Morty will be married on Sat., formal wedding, reception and all.

Our daughter, I am sorry to report, is very cute, but very, very naughty. Phil, she is getting out of hand terribly - she does not hear (that is she doesn't want to) and she loves to be spiteful. Tonight both points landed her a licking. Immediately after she was a perfect little angel. Kids is the craziest people! For instance, when I take her to Fay's house where Mark crawls all over, Adele will purposely step on his hand and make him cry. What's more she handles everything in sight and will not listen to me when I tell her please not to touch. Nine times out of ten she won't listen til I smack her hand or "too see". I guess it's just one of the stages they go through, but I'll be mighty happy when this one is over. Otherwise she is good and I can't complain what it comes to eating and sleeping. I'd better shut my big mouth before some thing happens. Every time I say she's good she decides to be bad, so there I am. We'll just compromise and say her behavior is fair - okay?

I have a few other things to do before I can hit the hay, so I guess I shall call it a day.

Oh yes, there is a soldier in full battle dress on guard in every single bus, subway, el, trolley and what have you and it gives me the creeps every time I look at one of them. They are even stationed in the subway and el stations! The strike ended two days ago, but they will remain for a few days, just in case anyone has any bright ideas. What a city - phooie!

Time to go now, baby, much as I hate to, but all good things must come to an end (it's time some of the bad ones did) so I'll sign off with a big hug, a long kiss and a sigh

P.S. I thought your poem of July 30 clever and it did very nicely in place of a letter. You certainly are full of bright ideas! I adore you, honey!
August 7, 1944
Dear Phil,
Here I am again. I’m still waiting for a letter from you, but I understand you must be busy.
Snuff got his notice today. He leaves Aug. 18th. He doesn’t know what branch he will get, as they don’t tell you until you leave.
I spoke to Evie last night and I promised her I would stop out this weekend, but now I’ll wait until he leaves.
The P.T.C. strike was settled finally. They have soldiers riding on all trolleys and buses with full packs, loaded guns, and steel helmets. They really look like they mean business.
You’ll have to excuse the short letter this time, but I just wanted you to know about Snuff.
Affectionately yours,
Dot