Post #440 - August 19, 1944 Dr. Lefkoe Claims Adele is a Trifle Knock-Kneed Due to the Chubbiness of Her Thighs and Your Prompt and Generous Response to My Appeal for Money to Convert into Bonds Warmed My Heart and A Dire Letter from Ed Paller 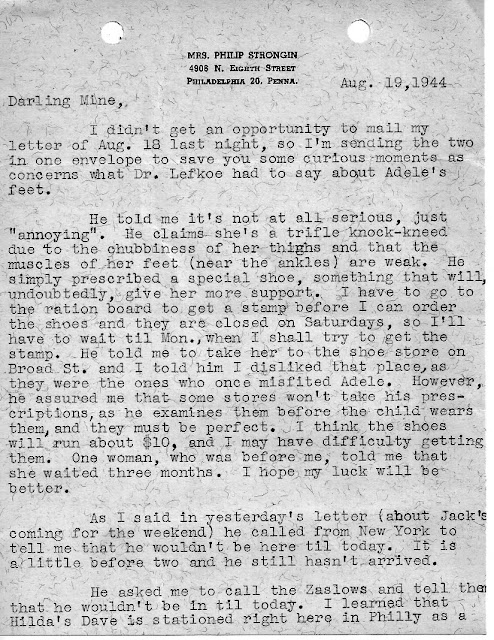 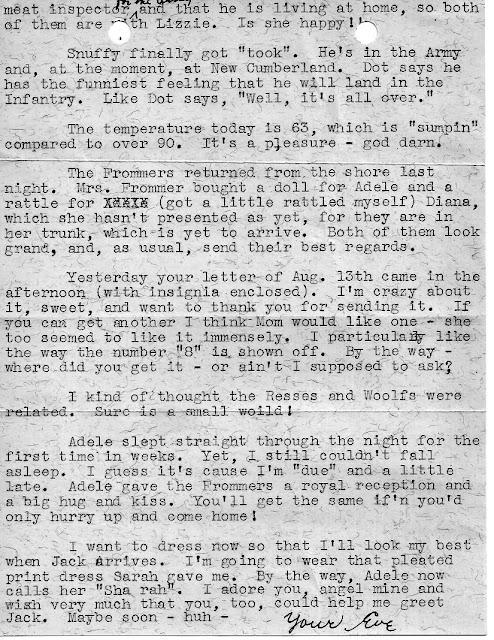 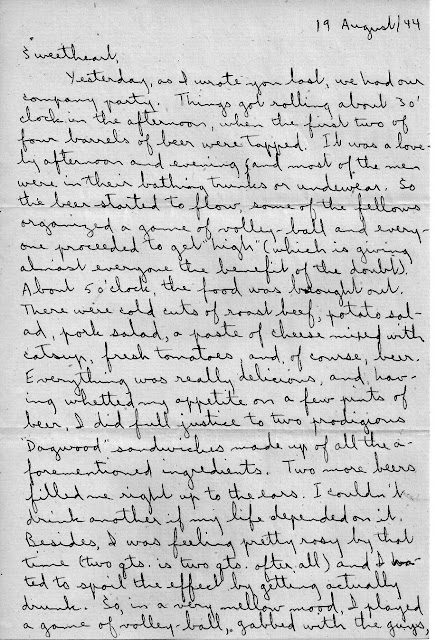 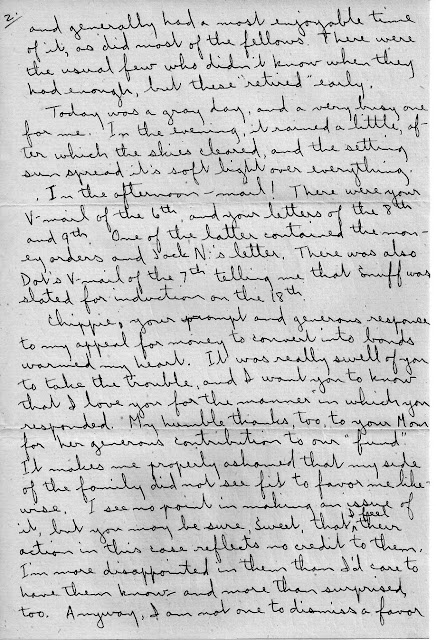 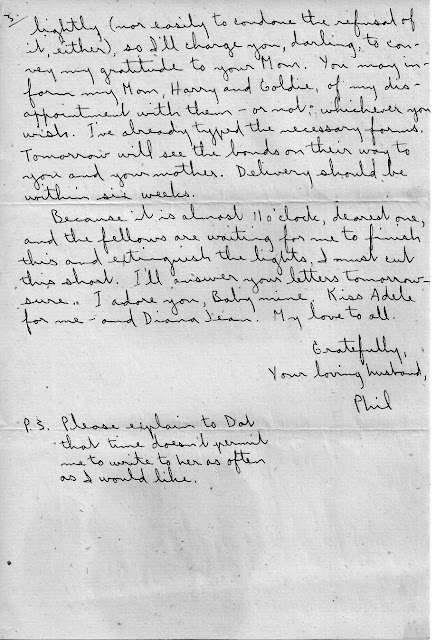 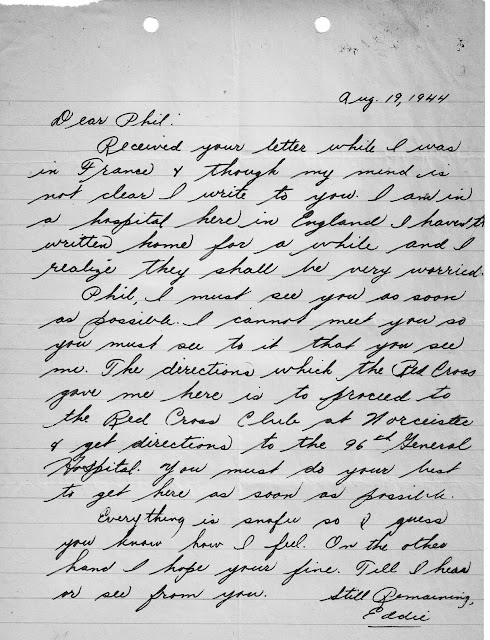 I didn't get an opportunity to mail my letter of Aug. 18 last night, so I'm sending the two in one envelope to save you some curious moments as concerns what Dr. Lefkoe had to say about Adele's feet.

He told me it's not at all serious, just "annoying". He claims she's a trifle knock-kneed due to the chubbiness of her thighs and that the muscles of her feet (near the ankles) are weak. He simply prescribed a special shoe, something that will, undoubtedly, give her more support. I have to go to the ration board to get a stamp before I can order the shoes and they are closed on Saturdays, so I'll have to wait til Mon., when I shall try to get the stamp. He told me to take her to the shoe store on Broad St. and I told him I disliked that place, as they were the ones who once misfited Adele. However, he assured me that some stores won't take his prescriptions, as he examines them before the child wears them, and they must be perfect. I think the shoes will run about $10, and I may have difficulty getting them. One woman, who was before me, told me that she waited three months. I hope my luck will be better.

As I said in yesterday's letter (about Jack's coming for the weekend) he called from New York to tell me that he wouldn't be here til today. It is a little before two and he still hasn't arrived.

He asked me to call the Zaslows and tell them that he wouldn't be in til today. I learned that is Hilda's Dave is stationed right here in Philly as a meat inspector in the army and that he is living at home, so both of them are with Lizzie. Is she happy!!

Snuffy finally got "took". He's in the Army and, at the moment, at New Cumberland. Dot says he has the funniest feeling that he will land in the Infantry. Like Dot says, "Well, it's all over."

The Frommers returned from the shore last night. Mrs. Frommer bought a doll for Adele and a rattle for (got a little rattled myself) Diana, which she hasn't presented as yet, for they are in her trunk, which is yet to arrive. Both of them look grand, and, as usual, send their best regards.

Yesterday your letter of Aug. 13th came in the afternoon (with insignia enclosed). I’m crazy about it, sweet, and want to thank you for sending it. If you can get another I think Mom would like one - she too seemed to like it immensely. I particularly like the way the number "8" is shown off. By the way - where did you get it - or ain't I supposed to ask?

I kind of thought the Reeses and Woolfs were related. Sure is a small woild!

Adele slept straight through the night for the first time in weeks. Yet, I still couldn't fall asleep. I guess it's cause I'm "due" and a little late. Adele gave the Frommers a royal reception and a big hug and kiss. You'll get the same if'n you'd only hurry up and come home!

I want to dress now so that I'll look my best when Jack arrives. I'm going to wear that pleated print dress Sarah gave me. By the way, Adele now calls her "Sha rah". I adore you, angel mine and wish very much that you, too, could help me greet Jack. Maybe soon - huh -

Yesterday, as I wrote you last, we had our company party. Things got rolling about 3 o'clock in the afternoon, when the first two of four barrels of beer were tapped. It was a lovely afternoon and evening and most of the men were in their bathing trunks or underwear. So the beer started to flow, some of the fellows organized a game of volley-ball and every one proceeded to get “high" (which is giving almost everyone the benefit of the doubt). About 5 o'clock, the food was brought out. There were cold cuts of roast beef and pork salad, a paste of cheese mixed with catsup, fresh tomatoes and, of course, beer. Everything was really delicious, and, having whetted my appetite on a few pints of beer, I did full justice to two prodigious "Dagwood" sandwiches made up of all the aforementioned ingredients. Two more beers filled me right up to the ears. I couldn't drink another if my life depended on it. Besides, I was feeling pretty rosy by that time (two qts. is two qts., after all) and I hated to spoil the effect by getting actually drunk. So in a very mellow mood, I played a game of volley-ball, gabbed with the guys, and generally had a most enjoyable time of it, as did most of the fellows. There were the usual few who didn't know when they had enough, but these “retired" early.

Today was a gray day, and a very busy one for me. In the evening, it rained a little, after which the skies cleared, and the setting sun spread it's soft light over everything.

In the afternoon - mail! There were your V-mail of the 6th, and your letters of the 8th and 9th. One of the latter contained the money orders and Jack N.’s letter. There was also Dot's V-mail of the 7th telling me that Snuff was slated for induction on the 18th.

Chippie, your prompt and generous response to my appeal for money to convert into bonds warmed my heart. It was really swell of you to take the trouble, and I want you to know that I love you for the manner in which you responded. My humble thanks, too, to your Mom for her generous contribution to our "fund”. It makes me properly ashamed that my side of the family did not see fit to favor me likewise. I see no point in making an issue it, but you may be sure, Sweet, that their action in this case reflects no credit to them. I'm more disappointed in them than I'd care to have them know - and more than surprised, too. Anyway, I’m not one to dismiss lightly (nor easily to condone the refusal of it, either), so I'll charge you, darling, to convey my gratitude to your Mom. You may inform my Mom, Harry and Goldie, of my disappointment with them - or not; whichever you wish. I've already typed the necessary forms. Tomorrow will see the bonds on their way you and your mother. Delivery should be within six weeks.
Because it is almost 11 o'clock, dearest one, and the fellows are waiting for me to finish this and extinguish the lights, I must cut this short. I'll answer your letters tomorrow—sure. I adore you, Baby mine. Kiss Adele for me and Diana Jean. My love to all.

Gratefully,
Your loving husband,
Phil
P.S. Please explain to Dot that time doesn't permit me to write to her as often as I would like.
Aug. 18, 1944

Received your letter while I was in France and though my mind is not clear I write to you. I am in a hospital here in England. I haven’t written home for a while and I realize they shall be very worried.

Everything is snafu so I guess you know how I feel. On the other hand I hope your (sic) fine. Till I hear or see from you.

Still Remaining
Eddie
Update: When I forwarded this post to my first cousin, Alan, who is Edward Paller’s son, he sent back an email with the following information:
It was the Battle of Saint Lo. My dad was in the hospital... July 1944.
From what my dad said, none of his battalion returned... all killed.
Posted by Marilyn at 1:48 PM