Post #442 - August 22, 1944 The Grief-Stricken Family Hopes the War Doesn’t End, That Roosevelt Doesn’t Get In Again and They Will Not Buy Another Bond 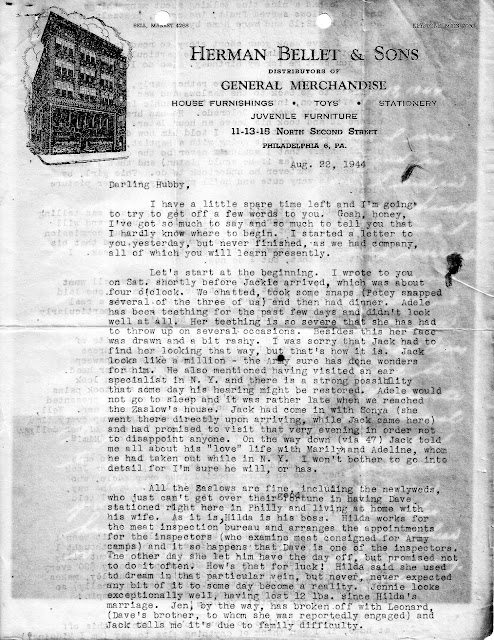 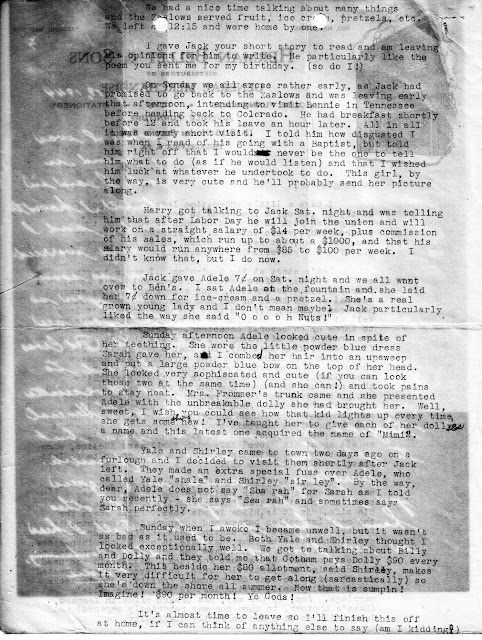 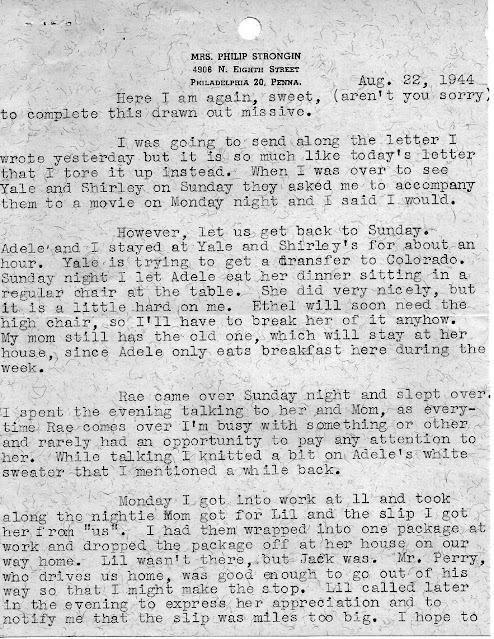 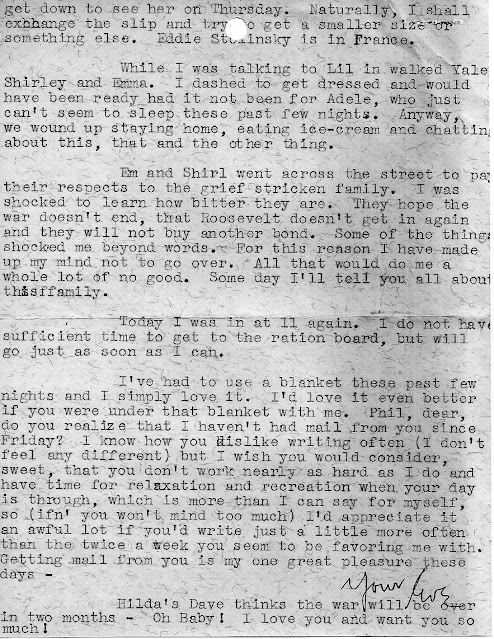 I have a little spare time left and I'm going to try to get off a few words to you, Gosh, honey, I've got so much to say and so much to tell you that I hardly know where to begin, I started a letter to you yesterday, but never finished, as we had company, all of which you will learn presently,

Let's start at the beginning. I wrote to you on Sat., shortly before Jackie arrived, which was about four o’clock. We chatted, took some snaps (Petey snapped several of the three of us) and then had dinner. Adele has been teething for the past few days and didn't look well at all. Her teething is so severe that she has had to throw up on several occasions. Besides this her face was drawn and a bit rashy. I was sorry that Jack had to find her looking that way, but that's how it is. Jack looks like a million - the army sure has done wonders for him. He also mentioned having visited an ear of specialist in N.Y. and there is a strong possibility that some day his hearing might be restored. Adele would not go to sleep and it was rather late when we reached the Zaslow's house. Jack had come in with Sonya (she went there directly upon arriving, while Jack came here) and had promised to visit that very evening in order not to disappoint anyone. On the way down (via 47 ) Jack told me all about his "love" life with Marilyn and Adeline, whom he had taken out while in N.Y. I won't bother to go into detail for I'm sure he will, or has.

All the Zaslows are fine, including the newlyweds, who just can't get over their good fortune in having Dave stationed right here in Philly and living at home with his wife, As it is, Hilda is his boss. Hilda works for the meat inspection bureau and arranges the appointments for the inspectors (who examine meat consigned for Army camps) and it so happens that Dave is one of the inspectors, The other day she let him have the day off, but promised not to do it often. How's that for luck! Hilda said she used to dream in that particular vein, but never, never expected any bit of it to some day become a reality. Jennie looks exceptionally well, having lost 12 lbs. since Hilda's marriage. Jen, by the way, has broken.off with Leonard, (Dave's brother, to whom she was reportedly engaged) and Jack tells me it's due to family difficulty,

We had a nice time talking about many things and the Zaslows served fruit, ice cream, pretzels, etc. We left a 12:15 and were home by one.

I gave Jack your short story to read and am leaving his opinions for him to write, He particularly like the poem you sent me for my birthday. (so do I!)

On Sunday we all arose rather early, as Jack had promised to go back to the Zaslows and was leaving early that afternoon, intending to visit Lennie in Tennessee before heading back to Colorado. He had breakfast shortly before 12 and took his leave an hour later. All in all it was a very short visit. I told him how disgusted I was when I read of his going with a Baptist, but told him right off that I would never be the one to tell him what to do (as if he would listen) and that I wished him luck at whatever he undertook to do. This girl, by the way, is very cute and he'll probably send her picture along.

Harry got talking to Jack Sat. night and was telling him that after Labor Day he will join the union and will work on a straight salary of $14 per week, plus commission of his sales, which run up to about a $1000, and that his salary would run anywhere from $85 to $100 per week. I didn't know that, but I do now.

Jack gave Adele 7¢ on Sat, night and we all went over to Ben's. I sat Adele at the fountain and she laid her 7¢ down for ice-cream and a pretzel. She's a real grown young lady and I don't mean maybe! Jack particularly liked the way she said "Oooh Nuts!"

Sunday afternoon Adele looked cute in spite of her teething. She wore the little powder blue dress Sarah gave her, and I combed her hair into an upsweep and put a large powder blue bow on the top of her head. She looked very sophisticated and cute (if you can look those two at the same time) (and she can!) and took pains to stay neat. Mrs. Frommer's trunk came and she presented Adele with the unbreakable dolly she had brought her. Well, sweet, I wish you could see how that kid lights up every time, she gets something new! I've taught her to give each of her dollies a name and this latest one acquired the name of "Mimi.

Yale and Shirley came to town two days ago on a furlough and I decided to visit them shortly after Jack left. They made an extra special fuss over Adele, who called Yale "shale" and Shirley "sir ley". By the way, dear, Adele does not say "Sha rah" for Sarah as I told you recently - she says "Sea rah" and sometimes says Sarah perfectly.

Sunday when I awoke I became unwell, but it wasn't as bad as it used to be. Both Yale and Shirley thought I looked exceptionally well. We got to talking about Billy and Dolly and they told me that Gotham pays Dolly $90 every month. This beside her $80 allotment, said Shirley, makes it very difficult for her to get along (sarcastically) so she's down the shore all summer. Now that is sumpin! Imagine! $90 per month! Ye Gods!

It's almost time to leave so I'll finish this off at home, if I can think of anything else to say (am I kidding?)

I was going to send along the letter I wrote yesterday but it is so much like today's letter that I tore it up instead. When I was over to see Yale and Shirley on Sunday they asked me to accompany them to a movie on Monday night and I said I would.

However, let us get back to Sunday. Adele and I stayed at Yale and Shirley's for about an hour. Yale is trying to get a transfer to Colorado. Sunday night I let Adele eat her dinner sitting in a regular chair at the table. She did very nicely, but it is a little hard on me. Ethel will soon need the high chair, so I'll have to break her of it anyhow. My mom still has the old one, which will stay at her house, since Adele only eats breakfast here during the week.

Rae came over Sunday night and slept over. I spent the evening talking to her and Mom, as every time Rae comes over I'm busy with some thing or other and rarely had an opportunity to pay any attention to her. While talking I knitted a bit on Adele's white sweater that I mentioned a while back.

Monday I got into work at 11 and took along the nightie Mom got for Lil and the slip I got her from "us". I had them wrapped into one package at work and dropped the package off at her house on our way home. Lil wasn't there, but Jack was. Mr. Perry, who drives us home, was good enough to go out of his way so that I might make the stop. Lil called later in the evening to express her appreciation and to notify me that the slip was miles too big. I hope to get down to see her on Thursday. Naturally, I shall exchange the slip and try o get a smaller size or something else. Eddie Stolinsky is in France.

While I was talking to Lil in walked Yale, Shirley and Emma. I dashed to get dressed and would have been ready had it not been for Adele, who just can't seem to sleep these past few nights. Anyway, we wound up staying home, eating ice-cream and chatting about this, that and the other thing.

Em and Shirl went across the street to pay their respects to the grief stricken family. I was shocked to learn how bitter they are. They hope the war doesn't end, that Roosevelt doesn't get in again and they will not buy another bond. Some of the things shocked me beyond words. For this reason I have made up my mind not to go over. All that would do me a whole lot of no good. Some day I'll tell you all about this family.

Today I was in at 11 again. I do not have sufficient time to get to the ration board, but will go just as soon as I can.

I've had to use a blanket these past few nights and I simply love it. I'd love it even better if you were under that blanket with me. Phil, dear, do you realize that I haven't had mail from you since Friday? I know how you dislike writing often (I don't feel any different) but I wish you would consider, sweet, that you don't work nearly as hard as I do and have time for relaxation and recreation when your day is through, which is more than I can say for myself, so (ifn’ you won't mind too much) I'd appreciate it an awful lot if you'd write just a little more often than the twice a week you seem to be favoring me with. Getting mail from you is my one great pleasure these days -

Your Eve
Hilda's Dave thinks the war will be over in two months - Oh Baby! I love you and want you so much!
Posted by Marilyn at 11:57 AM