Post #445 - August 27, 1944 I Accompanied Rita to Mersea, Where Bert Has His Boat and A Letter from Gloria Strongin 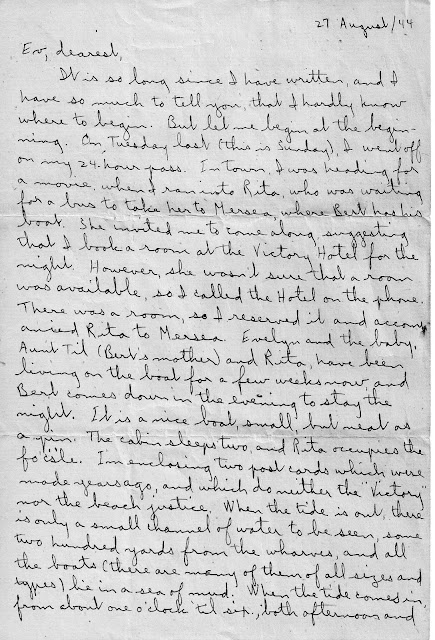 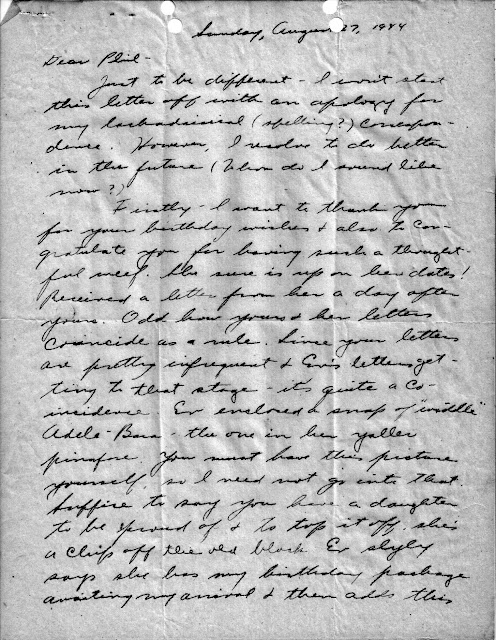 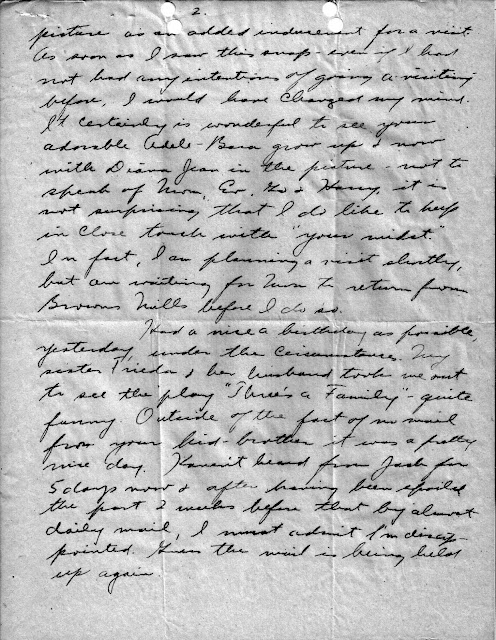 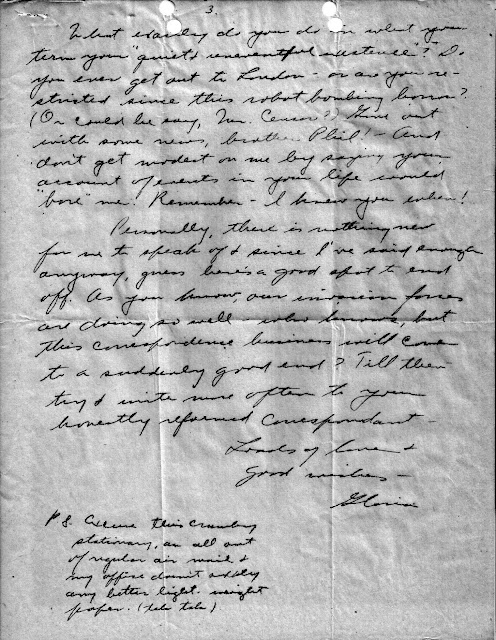 Ev, dearest,
It is so long since I have written, and I have so much to tell you that I hardly know where to begin. But let me begin at the beginning. On Tuesday last (this is Sunday), I went off on my 24-hour pass. In town, I was heading for a movie, when I ran into Rita, who was waiting for a bus to take her to Mersea, where Bert has his boat, she invited me to come along, suggesting that I book a room at the Victory Hotel for the night. However, she wasn't sure that a room was available, so I called the Hotel on the phone. There was a room, so f reserved it and accompanied Rita to Mersea. Evelyn and the baby, Aunt Til (Bert's mother) and Rita, have been living on the boat for a few weeks now, and Bert comes down in the evening to stay the night. It is a nice boat, small but neat as a pin. The cabin sleeps two, and Rita occupies the focsle. I’m enclosing two post cards which were made years ago, and which do neither the "Victory" nor the beach justice. When the tide is out, there is only a small channel of water to be seen, some two hundred yards from the wharves, and all the boats (there are many of them of all sizes and shapes) lie in a sea of mud. When the tide comes in, from about one o'clock ’til six; both afternoons and

Dear Phil—
Just to be different—I won’t start this letter off with an apology for my lackadaisical (spelling?) correspondence. However, I resolve to do better in the future (Whom do I sound like now?)
Firstly—I want to thank you for your birthday wishes and also to congratulate you for having such a thoughtful sweet. She sure is up on her dates! Received a letter from her a day after yours. Odd how yours and her letters coincide as a rule. Since your letters are pretty infrequent and Ev’s letters getting to that stage—it’s quite a coincidence. Ev enclosed a snap of “widdle” Adele Bara—the one in her yellow pinafore. You must have this picture yourself, so I need not go into that. Suffice to say you have a daughter to be proud of and to top it off, she’s a chip off the old block. Ev slyly says she has my birthday package awaiting my arrival and then adds this picture as an added inducement for a visit. As soon as I saw this snap—even if I had not had any intentions of going a-visiting before, I would have changed my mind. It certainly is wonderful to see your adorable Adele Bara grow up and now with Diana Jean in the picture—not to speak of Mom, Ev, Go and Harry, it is not surprising that I do like to keep in close touch with “your midst.” In fact, I am planning a visit shortly, but am waiting for Mom to return from Browns Mills before I do so.
Had as nice a birthday as possible yesterday, under the circumstances. My sister Frieda and her husband took me out to see the play “Three’s a Family”—quite funny. Outside of the fact of no mail from your kid-brother it was a pretty nice day. Haven’t heard from Jack for 5 days now and after having been spoiled the past 2 weeks before that by almost daily mail, I must admit I’m disappointed. Guess the mail is being held up again.
What exactly do you do in what you term your “quiet and uneventful existence?” Do you ever get out to London—or are you restricted since this robot bombing horror? (Or could he say, Mr. Censor?) Give out with some news, brother Phil!—And don’t get modest on me by saying your account of events in your life would “bore” me. Remember—I knew you when!
Personally, there is nothing new for me to speak of and since I’ve said enough anyway, guess here’s a good spot to end off. As you know, our invasion forces are doing so well—who knows, but this correspondence business will come to a suddenly good end? Till then—try and write more often to your honestly reformed correspondent—
Loads of love and good wishes—
Gloria
P.S. Excuse this crumby stationery, am all out of regular air mail and my office doesn’t supply any better light-weight paper. (tsk tsk)