Post #454 - September 12, 1944 It is a Funny Feeling as You Realize Your Baby is Not a Baby Anymore and Don’t Forget for a Minute, Sweet, that Many Like Me are Dying So That Others Dreams May Come True 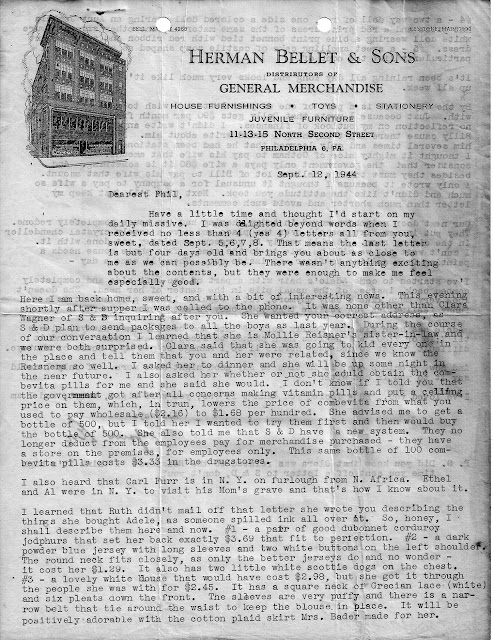 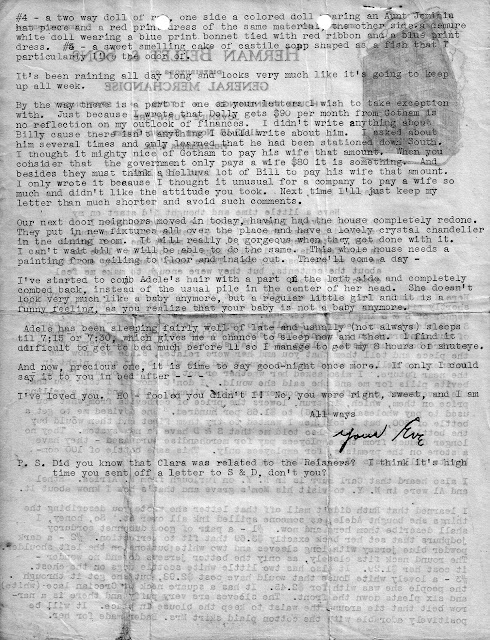 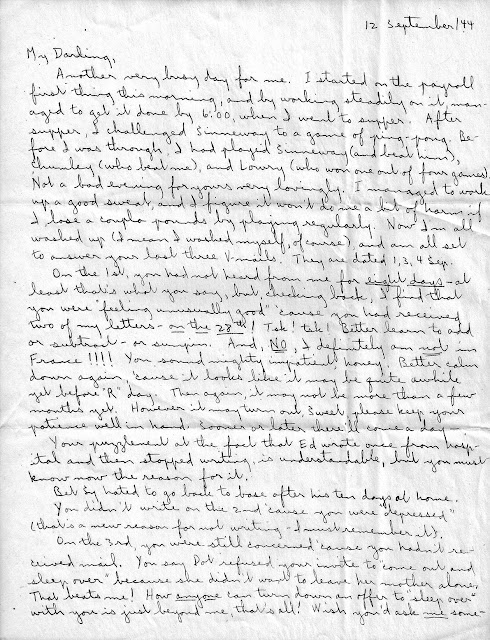 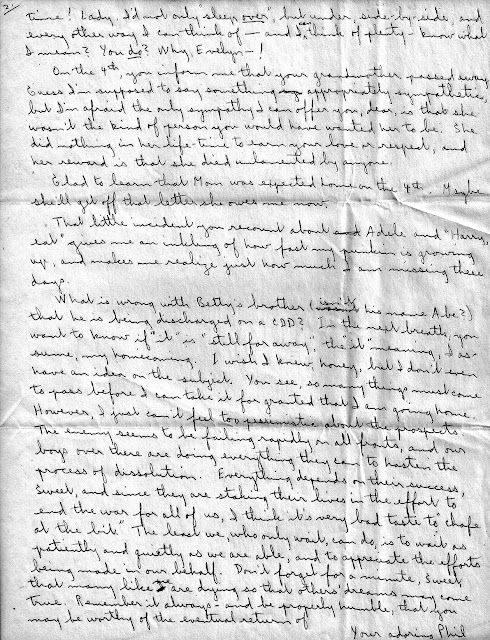 Have a little time and thought I'd start on my daily missive, I was delighted beyond words when I received no less than 4 (yes 4) letters all from you, sweet, dated Sept. 5, 6, 7, 8. That means the last letter is but four days old and brings you about as close to me as we can possibly be. There wasn't anything exciting about the contents, but they were enough to make me feel especially good.
Here I am back home, Sweet, and with a bit of interesting news. This evening shortly after supper I was called to the phone. It was none other than Clara Wagner of S & D inquiring after you. She wanted your correct address, as S & D plan to send packages to all the boys as last year. During the course of our conversation I learned that she is Mollie Reisner's sister-in-law and we were both surprised. Clara said that she was going to kid everyone in the place and tell them that you and her were related, since we know the Reisners so well. I asked her to dinner and she will be up some night in the near future. I also asked her whether or not she could obtain the combevita pills for me and she said she would. I don't know if I told you that the government got after all concerns making vitamin pills and put a ceiling price on them, which, in turn, lowers the price of combevita from what you used to pay wholesale ($2.16) to $1.68 per hundred. She advised me to get a bottle of 500, but I told her I wanted to try them first and then would buy the bottle of 500. She also told me that S & D have a new system. They no longer deduct from the employees pay for merchandise purchased - they have a store on the premises, for employees only. This same bottle of 100 combevita pills costs $3.33 in the drugstores.

I also heard that Carl Furr is in N. Y. on furlough from N. Africa. Ethel and Al were in N. Y. to visit his Mom's grave and that's how I know about it.

I learned that Ruth didn't mail off that letter she wrote you describing the things she bought Adele, as someone spilled ink all over it. So, honey, I shall describe them here and now. #1 - a pair of good dubonnet corduroy jodhpurs that set her back exactly $3.69 that fit to perfection. #2 - a dark powder blue jersey with long sleeves and two white buttons on the left shoulder. The round neck fits closely, as only the better jerseys do and no wonder - it cost her $1.29. It also has two little white scottie dogs on the chest. #3 - a lovely white blouse that would have cost $2.98, but she got it through the people she was with for $2.45. It has a square neck of Grecian lace (white) and six pleats down the front. The sleeves are very puffy and there is a narrow belt that tie around the waist to keep the blouse in place. It will be positively adorable with the cotton plaid skirt Mrs. Bader made for her. #4 - a two way doll of rag, one side a colored doll wearing an Aunt Jemima hat piece and a red print dress of the same material, the other side, a demure white doll wearing a blue print bonnet tied with red ribbon and a blue print dress. #5 - a sweet smelling cake of Castile soap shaped as a fish that I particularly like the odor of.

It's been raining all day long and looks very much like it's going to keep up all week.

By the way there is a part of one or your letters I wish to take exception with. Just because I wrote that Dolly gets $90 per month from Gotham is no reflection on my outlook of finances, I didn't write anything about Billy cause there isn't anything I could write about him. I asked about him several times and only learned that he had been stationed down South. I thought it mighty nice of Gotham to pay his wife that amount. When you consider that the government only pays a wife $80 it is something. And besides they must think a helluva lot of Bill to pay his wife that amount. I only wrote it because I thought it unusual for a company to pay a wife so much and didn't like the attitude you took. Next time I'll just keep my letter than much shorter and avoid such comments.

Our next door neighbors moved in today, having had the house completely redone. They put in new fixtures all over the place and have a lovely crystal chandelier in the dining room. It will really be gorgeous when they get done with it. I can't wait til we will be able to do the same. This whole house needs a painting from ceiling to floor and inside out. There'll come a day—

I've started to comb Adele's hair with a part on the left side and completely combed back, instead of the usual pile in the center of her head. She doesn't look very much like a baby anymore, but a regular little girl and it is a funny feeling, as you realize that your baby is not a baby anymore.

Adele has been sleeping fairly well of late and usually (not always ) sleeps til 7:15 or 7:30, which gives me a chance to sleep now and then. I find it difficult to get to bed much before 11 so I manage to get my 8 hours of shuteye.

All ways
your Eve

Another very busy day for me. I started on the payroll first thing this morning, and by working steadily on it, managed to get it done by 6:00, when I went to supper. After supper, I challenged Sinneway to a game of ping-pong. Before I was through, I had played Sinneway (and beat him), Chumley (who beat me), and Lowry (who won one out of four games). Not a bad evening for yours very lovingly. I managed to work up a good sweat, and I figure it won't do me a bit of harm if I lose a coupla pounds by playing regularly. Now I'm all washed up (I mean I washed myself, of course), and am all set to answer your last three V-mails. They are dated 1, 3, 4 Sep.

On the 1st, you had not heard from me for eight days - at least that's what you say, but, checking back, I find that you were feeling “unusually good" ’cause you had received two of my letters on the 28th! Tsk! tsk! Better learn to add or subtract - or sumpin. And, NO, I definitely am not in France!!!! You sound mighty impatient, honey. Better calm down again, 'cause it looks like it may be quite awhile yet before "R" day. Then again, it may not be more than a few months yet. However it may turn out, Sweet, please keep your patience well in hand. Sooner or later there'll come a day—
Your puzzlement at the fact that Ed wrote once from hospital and then stopped writing, is understandable, but you must know now the reason for it!

Bet Sy hated to go back to base ofter his ten days at home.

You didn't write on the 2nd cause you were “depressed" (that's a new reason for not writing - I must remember it).

On the 3rd, you were still concerned cause you hadn’t received mail. You say Dot refused your invite to “come out and sleepover" because she didn't want to leave her mother alone. That beats me! How anyone can turn down an offer to “sleep over" with you is just beyond me, that's all! Wish you'd ask me sometime! Lady, I'd not only sleep over, but under, side-by-side, and every other way of can think of - and I can think of plenty - know what I mean? You do? Why, Evelyn—!

On the 4th you inform me that your grandmother passed away. Guess I'm supposed to say something appropriately sympathetic, but I'm afraid the only sympathy I can offer you, dear, is that she wasn't the kind of person you would have wanted her to be. She did nothing in her lifetime to earn your love or respect, and her reward is that she died unlamented by anyone.

Glad to learn that Mom was expected home on the 4th. Maybe she'll get off that letter she owes me now.
That little incident you recount about Adele and “Harry eat”  gives me an inkling of how fast my punkin is growing up, and makes me realize just how much I am missing these days.
What is wrong with Betty's brother (isn’t his name Abe?) that he is being discharged on a CDD? In the next breath you want to know if “it” is “still far away,” the “it” meaning, I assume, my homecoming. I wish I knew, honey, but I don't even have an idea on the subject. You see, so many things must come to pass before I can take it for granted that I am going home. However, I just can't feel too pessimistic about the prospects. The enemy seems to be failing rapidly on all fronts, and our boys over there are doing everything they can to hasten the process of dissolution. Everything depends on their success, Sweet, and since they are risking their lives in the effort to end the war for all of us, I think it's very bad taste to “chafe at the bit." The least we, who only wait, can do is to wait as patiently and quietly as we are able, and to appreciate the efforts being made in our behalf. Don't forget for a minute, Sweet, that many like me are dying so that others’ dreams may come true. Remember it always - and be properly humble, that you may be worthy of the eventual return of