Post #457 - September 16, 1944 Ruth was Good Enough to Take Care of Adele All Afternoon and After the Show We Groped Our Way Through the Moonless Night to the Marks’ Place 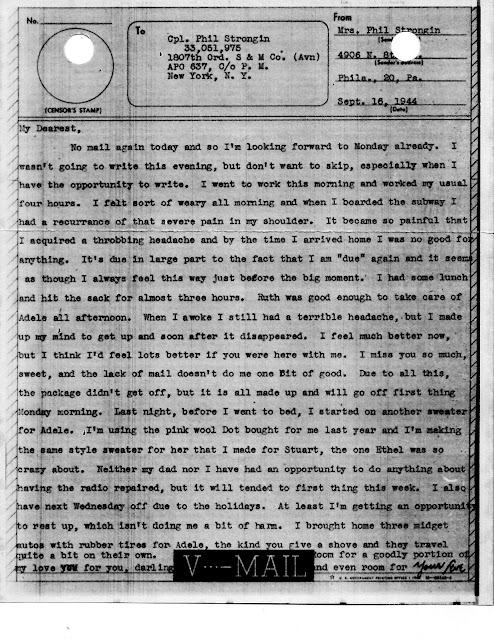 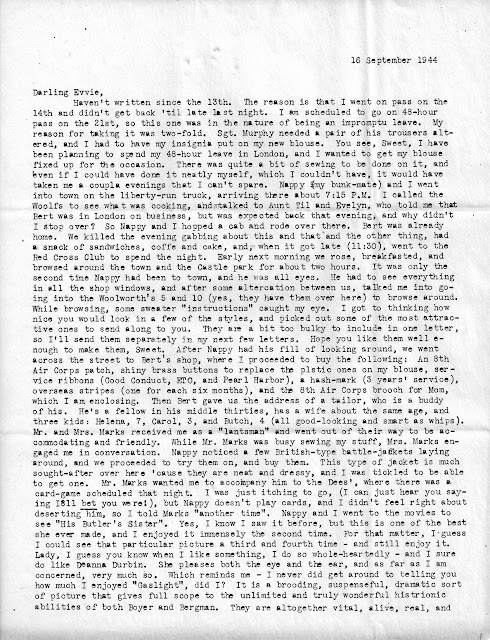 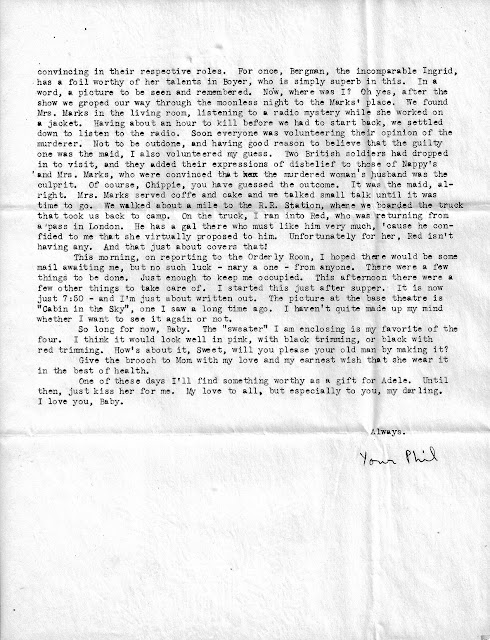 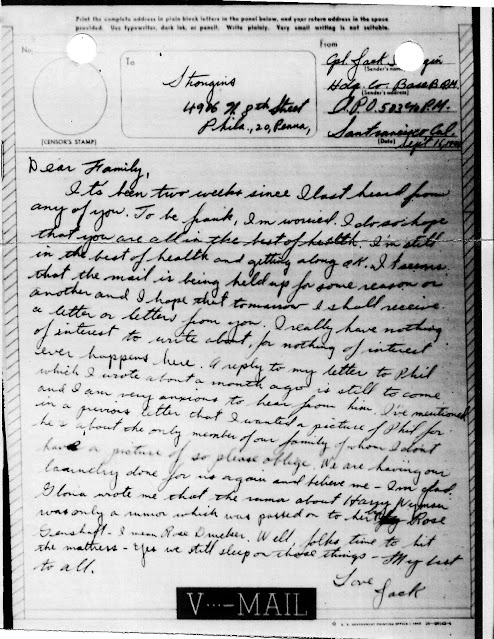 No mail again today and so I'm looking forward to Monday already. I wasn't going to write this evening, but don't want to skip, especially when I have the opportunity to write. I went to work this morning and worked my usual four hours. I felt sort of weary all morning and when I boarded the subway I had a recurrence of that severe pain in my shoulder. It became so painful that I acquired a throbbing headache and by the time I arrived home I was no good for anything. It's due in large part to the fact that I am "due" again and it seems as though I always feel this way just before the big moment. I had some lunch and hit the sack for almost three hours. Ruth was good enough to take care of Adele all afternoon. When I awoke I still had a terrible headache, but I made up my mind to get up and soon after it disappeared. I feel much better now, but I think I'd feel lots better if you were here with me. I miss you so much, sweet, and the lack of mail doesn't do me one bit of good. Due to all this, the package didn't get off, but it is all made up and will go off first thing Monday morning. Last night, before I went to bed, I started on another sweater for Adele. I'm using the pink wool Dot bought for me last year and I'm making the same style sweater for her that I made for Stuart, the one Ethel was so crazy about. Neither my dad nor I have had an opportunity to do anything about having the radio repaired, but it will be tended to first thing this week. I also have next Wednesday off due to the holidays. At least I'm getting an opportunity to rest up, which isn't doing me a bit of harm. I brought home three midget autos with rubber tires for Adele, the kind you give a shove and they travel quite a bit on their own. Room for a goodly portion of my love for you, darling and even room for
Your Eve
16 September 1944

This morning, on reporting to the Orderly Room, I hoped there would be some mail awaiting me, but no such luck - nary a one - from anyone. There were a few things to be done. Just enough to keep me occupied. This afternoon there were a few other things to take care of. I started this just after supper. It is now just 7:50 - and I'm just about written out. The picture at the base theatre is "Cabin in the Sky, one I saw a long time ago. I haven't quite made up my mind whether I want to see it again or not.

So long for now, Baby. The "sweater" I am enclosing is my favorite of the four. I think it would look well in pink, with black trimming, or black with red trimming. How's about it, Sweet, will you please your old man by making it?

Give the brooch to Mom with my love and my earnest wish that she wear it in the best of health.

One of these days I'll find something worthy as a gift for Adele. Until then, just kiss her for me. My love to all, but especially to you, my darling. I love you, Baby.

It's been two weeks since last heard from any of you. To be frank, I’m worried. I do so hope that you are all in the best of health. I’m still in the best of health and getting along O.K. It seems that the mail is being held up for some reason or another and I hope that tomorrow I shall receive a letter or letters from you. I really have nothing of interest to write about as nothing of interest ever happens here. A reply to my letter to Phil which I wrote about a month ago is still to come and I am very anxious to hear from him. I've mentioned in a previous letter that I wanted a picture of Phil for he’s the only member of our family of whom I don’t have a picture of so please oblige. We are having our laundry done for us again and believe me - I’m glad. Gloria wrote me that the rumor about Harry Weiman was only a rumor which was passed on to her by Rose Genshaft - I mean Rose Drucker. Well, folks time to hit the mattress - yes we still sleep on those things - My best to all.
Love,
Jack
Posted by Marilyn at 1:00 PM