Post #459 - September 18, 1944 Guess They’ll All Have Kids By the Time You Get Back and We Came Out to Find the Sky Full of the Planes and Gliders of the 1st Airborne Army 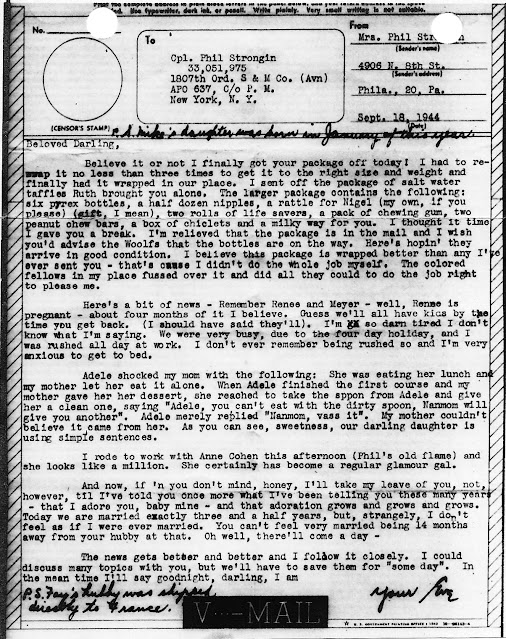 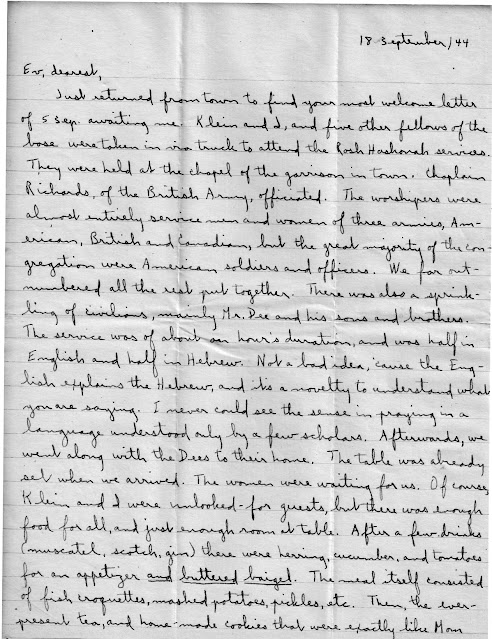 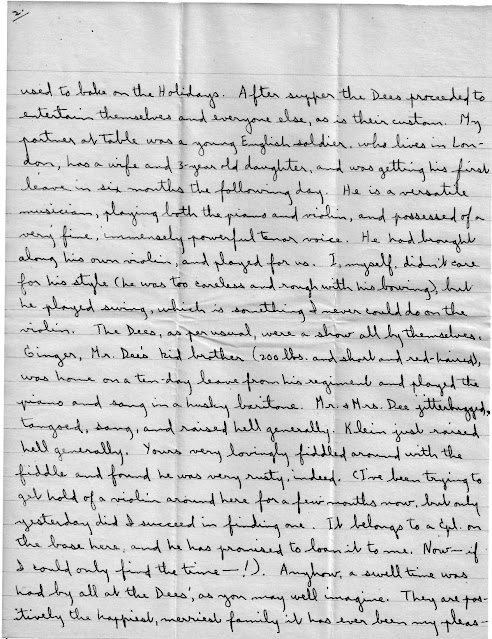 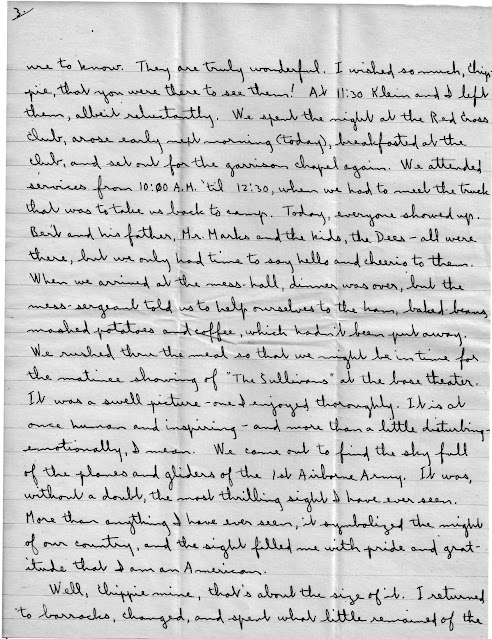 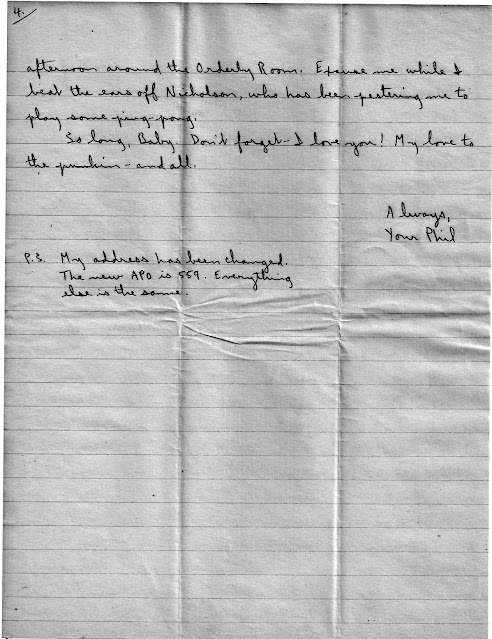 Believe it or not I finally got your package off today! I had to rewrap it no less than three times to get it to the right size and weight and finally had it wrapped in our place. I sent off the package of salt water taffies Ruth brought you alone. The larger package contains the following: six pyrex bottles, a half dozen nipples, a rattle for Nigel (my own, if you please) (gift, I mean), two rolls of life savers, a pack of chewing gum, two peanut chew bars, a box of chiclets and a milky way for you. I thought It time I gave you a break. I'm relieved that the package is in the mail and I wish you'd advise the Woolfs that the bottles are on the way. Here's hopin' they arrive in good condition. I believe this package is wrapped better than any I ever sent you - that's cause I didn't do the whole job myself. The colored fellows in my place fussed over it and did all they could to do the job right to please me.

Here's a bit of news - Remember Renee and Meyer - well, Renee is pregnant - about four months of it I believe. Guess we'll all have kids by the time you get back. (I should have said they'll). I'm so darn tired I don't know what I'm saying. We were very busy, due to the four day holiday, and I was rushed all day at work. I don't ever remember being rushed so and I'm very anxious to get to bed.

Adele shocked my mom with the following: She was eating her lunch and my mother let her eat it alone. When Adele finished the first course and my mother gave her her dessert, she reached to take the spoon from Adele and give her a clean one, saying "Adele, you can't eat with the dirty spoon, Nanmom will give you another". Adele merely replied "Nanmom, vass it". My mother couldn't believe it came from her. As you can see, sweetness, our darling daughter is using simple sentences.

I rode to work with Anne Cohen this afternoon (Phil's old flame) and she looks like a million. She certainly has become a regular glamour gal.

And now, if’n you don't mind, honey, I'll take my leave of you, not, however, til I've told you once more what I've been telling you these many years - that I adore you, baby mine - and that adoration grows and grows and grows. Today we are married exactly three and a half years, but, strangely, I don't feel as if I were ever married. You can't feel very married being 14 months away from your hubby at that. Oh well, there'll come a day -

The news gets better and better and I follow it closely. I could discuss many topics with you, but we'll have to save them for "some day". In the meantime I'll say goodnight, darling, I am
Your Eve
P.S. Fay’s hubby was shipped directly to France.
P.S. Mike’s daughter was born in January of this year.

Just returned from town to find your most welcome letter of 5 Sep. awaiting me. Klein and I, and five other fellows of the base were taken in via truck to attend the Rosh Hashanah services. They were held at the chapel of the garrison in town. Chaplain Richards, of the British Army, officiated. The worshipers were almost entirely service men and women of three armies, American, British and Canadian, but the great majority of the congregation were American soldiers and officers. We far outnumbered all the rest put together. There was also a sprinkling of civilians, mainly Mr. Dee and his sons and brothers. The service was of about an hour's duration, and was half in English and half in Hebrew. Not a bad idea, cause the English explains the Hebrew, and its a novelty to understand what you are saying. I never could see the sense in praying in a language understood only by a few scholars. Afterwards, we went along with the Dees to their home. The table was already set when we arrived. The women were waiting for us. Of course, Klein and I were unlooked-for guests, but there was enough food for all, and just enough room at table. After a few drinks (muscatel, scotch, gin) there were herring, cucumber, and tomatoes for an appetizer and buttered baigel. The meal itself consisted of fish croquettes, mashed potatoes, pickles, etc. Then, the ever present tea, and home-made cookies that were exactly like Mom used to bake on the Holidays. After supper, the Dees proceeded to entertain themselves and everyone else, as is their custom. My partner at table was a young English soldier, who lives in London, has a wife and 3-year old daughter, and was getting his first leave in six months the following day. He is a versatile musician, playing both the piano and violin, and possessed of a very fine, immensely powerful tenor voice. He had brought along his own violin, and played for us. I myself, didn't care for his style (he was too careless and rough with his bowing, but he played swing, which is something I never could do on the violin, The Dees, as per usual, were a show all by themselves. Ginger, Mr. Dee's kid brother (200 lbs, and short and red-haired), was home on a ten-day leave from his regiment and played the piano and sang in a husky baritone. Mr. & Mrs. Dee jitterbugged, tangoed, sang, and raised hell generally. Klein just raised hell generally. Yours very lovingly fiddled around with the fiddle and found he was very rusty, indeed. (I've been trying to get hold of a violin around here for a few months now, but only yesterday did I succeed in finding one. It belongs to a Cpl. on the base here, and he has promised to loan it to me. Now - if I could only find the time—!). Anyhow, a swell time was had by all at the Dees’, as you may well imagine. They are positively the happiest, merriest family it has ever been my pleasure to know. They are truly wonderful. I wished so much, Chippie, that you were there to see them! At 11:30, Klein and I left them, albeit reluctantly. We spent the night at the Red Cross Club, arose early next morning (today), breakfasted at the club, and set out for the garrison chapel again. We attended services from 10:00 A. M. 'til 12:30, when we had to meet the truck that was to take us back to camp. Today, everyone showed up. Bert and his father, Mr. Marks and the kids, the Dees—all were there, but we only had time to say hello and cheerio to them. Where we arrived at the mess-hall, dinner was over, but the mess-sergeant told us to help ourselves to the ham, baked beans, mashed potatoes and coffee, which hadn’t been put away. We rushed thru the meal so that we might be in time for the matinee showing of "The Sullivans" at the base theater. It was a swell picture—one I enjoyed thoroughly. It is at once human and inspiring and more than a little disturbing—emotionally, I mean. We came out to find the sky full of the planes and gliders of the 1st Airborne Army. It was, without a doubt, the most thrilling sight I have ever seen. More than anything I have ever seen, it symbolized the might of our country, and the sight filled me with pride and gratitude that I am an American.

Well, Chippie mine, that's about the size of it. I returned to barracks, changed, and spent what little remained of the afternoon around the Orderly Room. Excuse me while I beat the ears off Nicholson, who has been pestering me to play some ping-pong.

So long, Baby. Don't forget—I love you! My love to the punkin—and all.

P.s. My address has been changed. The new APO is 559. Event else is the same.