Post #465 - September 25, 1944 My Folks had a Letter from the War Dept. Today Advising Them of Eddie’s Condition and You Know How I Dislike Curls—and Ringlets I Simply Detest! 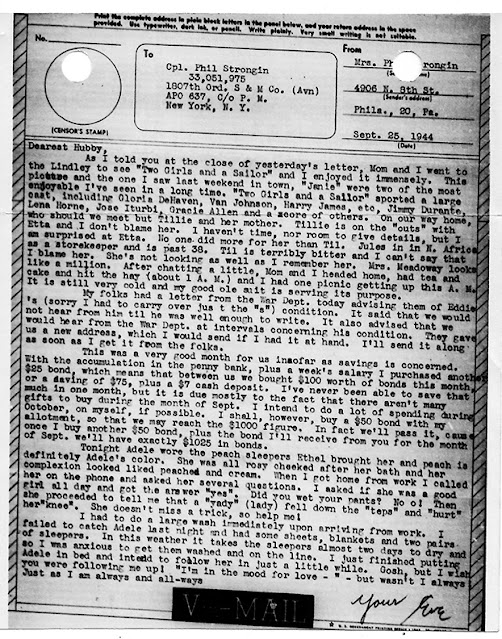 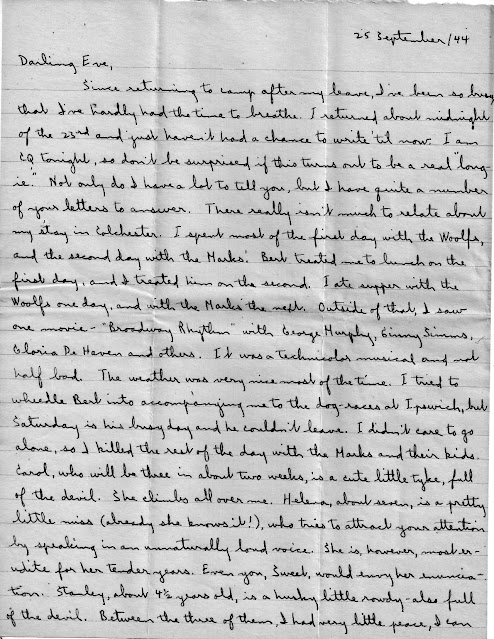 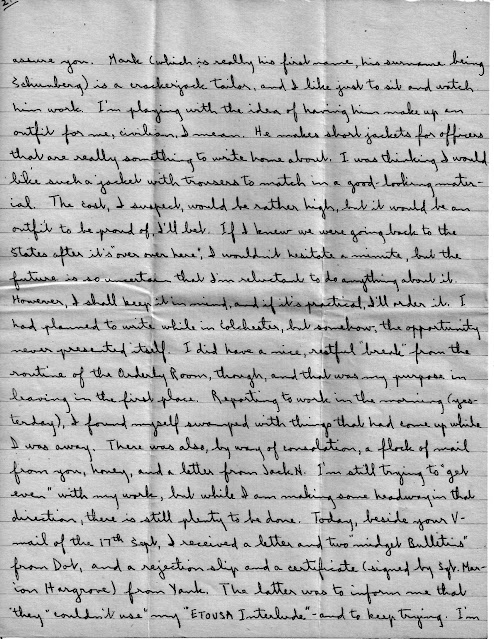 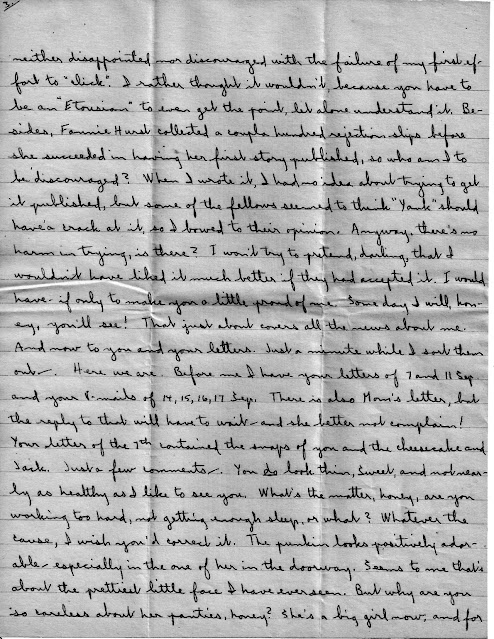 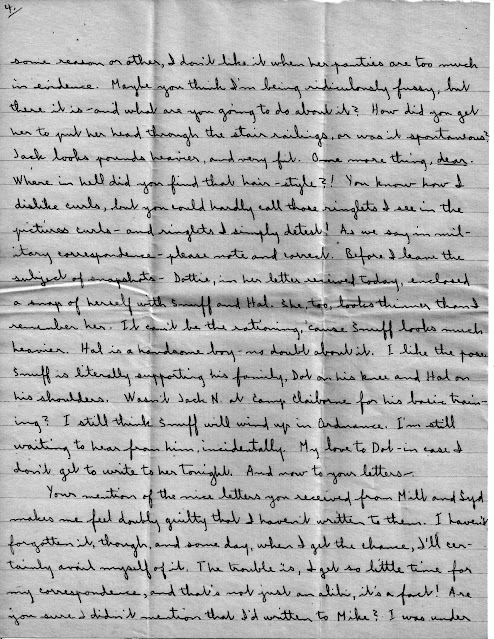 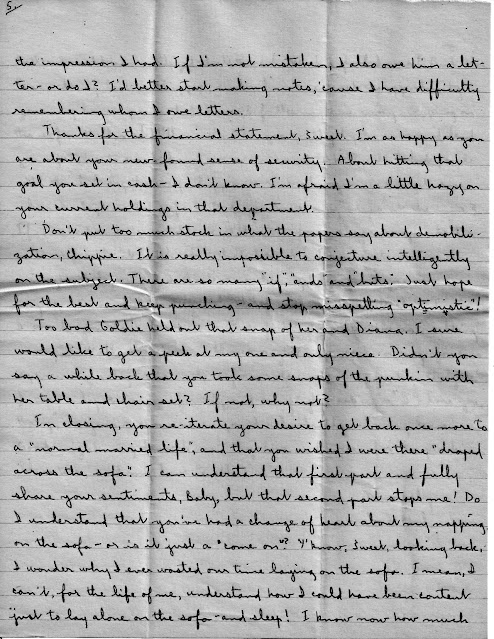 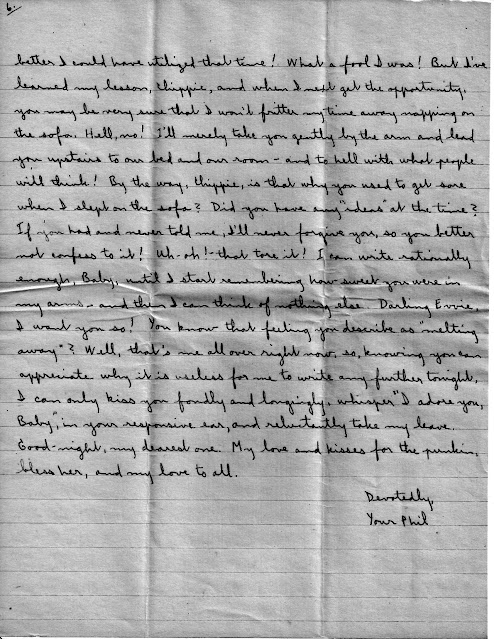 As I told you at the close of yesterday's letter, Mom and I went to the Lindley to see "Two Girls and a Sailor” and I enjoyed it immensely. This picture and the one I saw last weekend in town, "Janie" were two of the most enjoyable I've seen in a long time. "Two Girls and a Sailor" sported a large cast, including Gloria DeHaven, Van Johnson, Harry James, etc., Jimmy Durante, Lena Horne, Jose Iturbi, Gracle Allen and a score of others. On our way home, who should we meet but Tillie and her mother. Tillie is on the "outs" with Etta and I don't blame her. I haven't time, nor room to give details, but I am surprised at Etta. No one did more for her than Til. Jules is in Africa as a storekeeper and is past 38. Til is terribly bitter and I can't say that I blame her. She's not looking as well as I remember her. Mrs. Meadoway looks like a million. After chatting a little, Mom and I headed home, had tea and cake and hit the hay (about 1 A. M.) and I had one picnic getting up this A.M. It is still very cold and my good ole suit is serving its purpose.

My folks had a letter from the War Dept. today advising them of Eddie’s (sorry I had to carry over just the "s") condition. It said that we would not hear from him til he was well enough to write. It also advised that we would hear from the War Dept. at intervals concerning his condition. They gave us a new address, which I would send if I had it at hand. I'll send it along as soon as I get it from the folks.

This was a very good month for us insofar as savings is concerned. With the accumulation in the penny bank, plus a week's salary, I purchased another $25 bond, which means that between us we bought $100 worth of bonds this month, or a saving of $75, plus a $7 cash deposit. I've never been able to save that much in one month, but it is due mostly to the fact that there aren't many gifts to buy during the month of Sept. I intend to do a lot of spending during October, on myself, if possible. I shall, however, buy a $50 bond with my allotment, so that we may reach the $1000 figure. In fact we'll pass it, cause once I buy another $50 bond, plus the bond I'll receive from you for the month of Sept. we'll have exactly $1025 in bonds.

Tonight Adele wore the peach sleepers Ethel brought her and peach is definitely Adele's color. She was all rosy-cheeked after her bath and her complexion looked liked peaches and cream. When I got home from work I called her on the phone and asked her several questions. I asked if she was a good girl all day and got the answer “yes". Did you wet your pants? No o! Then she proceeded to tell me that a "yady" (lady) fell down the "teps" and "hurt her "knee". She doesn't miss a trick, so help me!

I had to do a large wash immediately upon arriving from work. I failed to catch Adele last night and had some sheets, blankets and two pairs of sleepers. In this weather it takes the sleepers almost two days to dry and so I was anxious to get them washed and on the line. I just finished putting Adele in bed and intend to follow her in just a little while, Gosh, but I wish you were following me up! "I'm In the mood for love - " but wasn't I always? Just as I am always and all-ways
Your Eve
25 September 1944
Darling Eve,

Your mention of the nice letters you received from Milt and Syd makes me feel doubly guilty that I haven’t written to them. I haven't forgotten it, though, and some day, when I get the chance, I'll certainly avail myself of it. The trouble is, I get so little time for my correspondence, and that's not just an alibi, it's a fact! Are you sure I didn’t mention that I’d written to Mike? I was under the impression I had. If I'm not mistaken, I also owe him a letter—or do I? I'd better start making notes, 'cause I have difficulty remembering whom I owe letters.
Thanks for the financial statement, Sweet. I'm as happy as you are about your new-found sense of security. About hitting that goal you set in cash—I don't know. I'm afraid t'm a little hazy on your current holdings in that department.

Don't put too much stock in what the papers say about demobilization, Chippie. It is really impossible to conjecture intelligently on the subject. There are so many “ifs,” “ands” and “buts.” Just hope for the best and keep punching and stop misspelling "optimistic"!

Too bad Goldie held out that snap of her and Diana. I sure would like to get a peek at my one and only niece. Didn't you say a while back that you took some snaps of the punkin with her table and chair set? If not, why not?
In closing, you reiterate your desire to get back once more to a "normal married life,” and that you wished I were there "draped across the sofa.” I can understand that first part and fully share your sentiments, Baby, but that second part stops me! Do I understand that you've had a change of heart about my napping on the sofa—or is it just a "come on”? Y’know, sweet, looking back, I wonder why I ever wasted our time laying on the sofa. I mean, I can't, for the life of me, understand how I could have been content just to lay alone on the sofa and sleep! I know now how much better I could have utilized that time! What a fool I was! But I’ve learned my lesson, Chippie, and when I next get the opportunity, you may be very sure that I won't fritter my time away napping on the sofa. Hell, no! I'll merely take you gently by the arm and lead you upstairs to our bed and our room—and to hell with what people will think! By the way, Chippie, is that why you used to get sore when I slept on the sofa? Did you have any “ideas” at the time? If you had and never told me, t'll never forgive you, so you better not confess to it! Uh-oh!—that tore it! I can write rationally enough, Baby, until I start remembering how sweet you were in my arms, and then I can think of nothing else. Darling Evvie, I want you so! You know that feeling you describe as “melting away"? Well, that's me all over right now, so, knowing you can appreciate why it is useless for me to write any further tonight, I can only kiss you fondly and longingly, whisper “I adore you, Baby,” in your responsive ear, and reluctantly take my leave. Good-night, my dearest one. My love and kisses for the punkin, bless her, and my love to all.

Devotedly,
Your Phil
*Unit Diary January 31, 1944
The activation of the 465th Sub Depot Class I was effected by General Orders No 212, Headquarters VIII Bomber Command, ETOUSA, dated 29 November 1943. This order brought about the breaking up of the 74th Service Squadron which was a well-molded outfit. The activation of the 465th was an overseas transaction and therefore does not have any station history.

The original number of men transferred to the 465th totaled 172 men as shown on paragraph 26, SO #84, HQ 392nd Bomb Gp dated 1 December 1943. These men were all experienced men and gave the 465th a solid foundation on which to operate efficiently.

The original 74th Service Squadron was split wide open and changes in personnel were being made during the month of December. The cadre of the 74th Service Squadron was attached to the 465th for administration, quarters and rations and on 5 January 1944, a cadre of 36 enlisted men under command of First Sergeant Emil Perez converged on the Wendling Station early in the morning, boarded the train for AAF Station 455 for VOCU, 2nd Bomb Division. GO #5, HQ VIII Bomber Command, dated 1 January 1944, came in to our office on 8 January 1944 to confirm this movement. In the transfer of Squadron Funds, the 465th received $54.08. The money is in cash and is carried on the books in English currency.

All papers pertaining to the 74th Service Squadron were packed and shipped. The Squadron Property Book was cleared and closed and all allied papers were sent on.

From the original 166 enlisted men, the squadron strength has increased during the month of December and January to 223 assigned and 29 attached bringing the total to 252 enlisted men. The officer strength remains unchanged.
Posted by Marilyn at 8:47 AM