Post #495 - October 28, 1944 My Uncles are Dragging the Matter of My Grandmother’s Estate to Court and I Divided My Time Between Keeping the Fire Going and Knocking Out a Letter to the Editor of Coronet Magazine 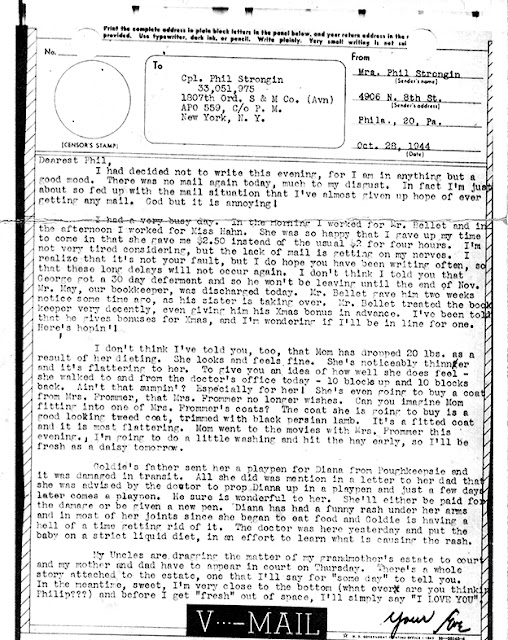 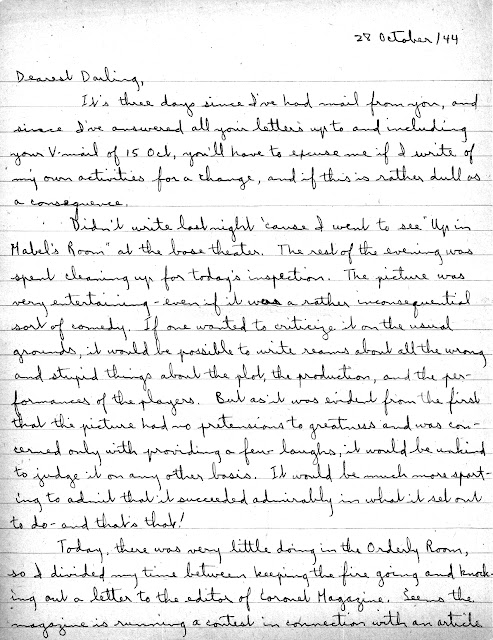 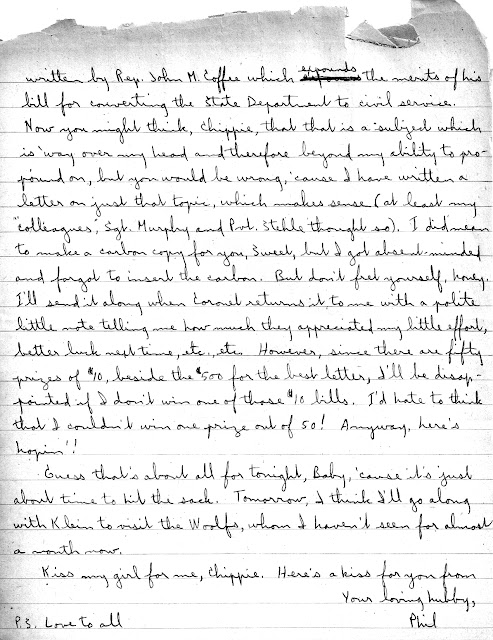 I had decided not to write this evening, for I am in anything but a good mood. There was no mail again today, much to my dlsgust. In fact I'm just about so fed up with the mall situation that I've almost given up hope of ever getting any mail. God but it is annoying!

I had very busy day. In the morning I worked for Mr. Bellet and in the afternoon I worked for Miss Hahn. She was so happy that I gave up my time to come in that she gave me $2.50 instead of the usual $2 for four hours. I’m not very tired considering, but the lack of mail is getting on my nerves. I realize that it's not your fault, but I do hope you have been writing often, so that these long delays will not occur again. I don't think I told you that George got a 30 day deferment and so he won't be leaving until the end of Nov. Mr. May, our bookkeeper, was discharged today. Mr. Bellet gave him two weeks notice some time ago, as his sister is taking over. Mr. Bellet treated the bookkeeper very decently, even giving him his Xmas bonus in advance. I've been told that he gives bonuses for Xmas, and I'm wondering if I'll be in line for one. Here's hopin'!

I don't think I've told you, too, that Mom has dropped 20 lbs. as a result of her dieting. She looks and feels fine. She's noticeably thinner and it's flattering to her. To give you an idea of how well she does feel - she walked to and from the doctor's office today - 10 blocks up and 10 blocks back. Ain't that sumpin'? Especially for her! She's even going to buy a coat from Mrs. Frommer, that Mrs. Frommer no longer wishes. Can you imagine Mom fitting into one of Mrs. Frommer's coats? The coat she is going to buy is a good looking tweed coat, trimmed with black persian lamb. It's a fitted coat and it is most flattering. Mom went to the movies with Mrs. Frommer this evening. I'm going to do a little washing and hit the hay early, so I'll be fresh as a daisy tomorrow.

Goldie's father sent her a playpen for Diana from Poughkeepsie and it was damaged in transit. All she did was mention in a letter to her dad that she was advised by the doctor to prop Diana up in a playpen and just a few days later comes a playpen. He sure is wonderful to her. She'll either be paid for the damage or be given a new pen. Diana has had a funny rash under her arms and in most of her joints since she began to eat food and Goldie is having a hell of a time getting rid of it. The doctor was here yesterday and put the baby on a strict liquid diet, in an effort to learn what is causing the rash.

My Uncles are dragging the matter of my grandmother's estate to court and my mother and dad have to appear in court on Thursday. There's a whole story attached to the estate, one that I'll say for "some day" to tell you. In the meantime, sweet, I'm very close to the bottom (what ever are you thinking Philip???) and before I get "fresh" out of space, I'll simply say "I LOVE YOU."
Your Eve

Dearest Darling,
It's three days since I've had mail from you, and since I've answered all your letters up to and including your V-mail of 15 Oct, you'll have to excuse me if I write of my own activities for a change, and if this is rather dull as a consequence.

Didn't write last night ’cause I went to see "Up in Mabel's Room" at the base theater. The rest of the evening was spent cleaning up for today's inspection. The picture was very entertaining - even if it was a rather inconsequential sort of comedy. If one wanted to criticize it on the usual grounds, it would be possible to write reams about all the wrong and stupid things about the plot, the production, and the performances of the players. But as it was evident from the first that the picture had no pretensions to greatness and was concerned only with providing a few laughs, it would be unkind to judge it on any other basis. It would be much more sporting to admit that it succeeded admirably in what it set out to do - and that's that! -
Today, there was very little doing in the Orderly Room, so I divided my time between keeping the fire going and knocking out a letter to the editor of Coronet Magazine. Seems the magazine is running a contest in connection with an article written by Rep. John M. Coffee which expounds the merits of his bill for converting the state Department to civil service. Now you might think, Chippie, that that is a subject which is way over my head and therefore beyond my ability to propound on, but you would be wrong, ’cause I have written a letter on just that topic, which makes sense (at least my colleagues, Sgt. Murphy and Pvt. Stahle thought so). I did mean to make a carbon copy for you, Sweet, but I got absent-minded and forgot to insert the carbon. But don't fret yourself, honey. I'll send it along when Coronet returns it to me with a polite little note telling me how much they appreciated my little effort, better luck next time, etc., etc. However, since there are fifty prizes of $10 beside the $500 for the best letter, I'll be disappointed if I don't win one of those $10 bills. I'd hate to think that I couldn't win one prize out of 50! Anyway, here's hopin!
Guess that's about all for tonight, Baby, 'cause it's just about time to hit the sack. Tomorrow, I think I'll go along with Klein to visit the Woolfs, whom I haven't seen for almost a month now.

Kiss my girl for me, Chippie. Here's a kiss for you from

Your loving hubby,
Phil
P.S. Love to all