Post #497 - October 30, 1944 Mr. First is Most Anxious to Have Me Learn the Insurance Business and It Was Your Dancing that Attracted Me to You from the First 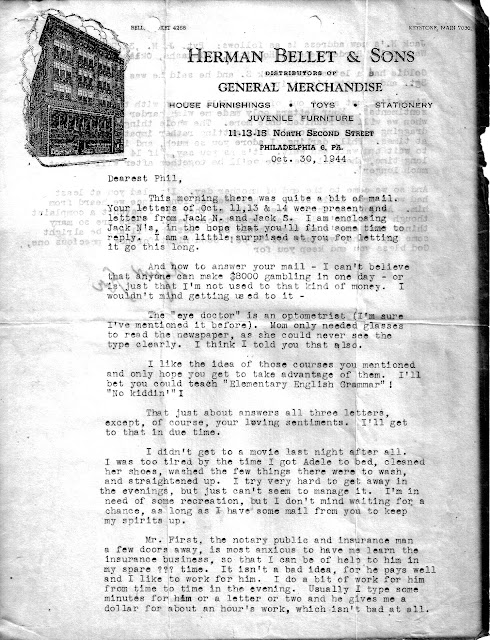 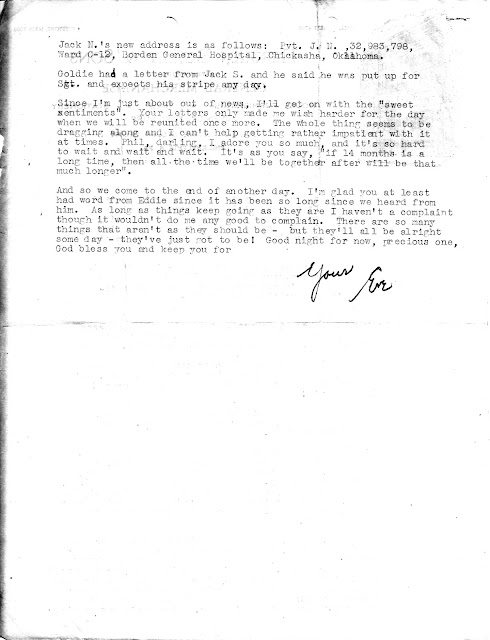 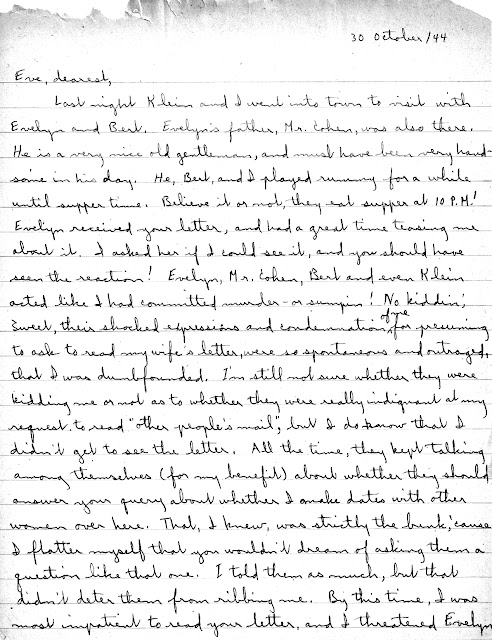 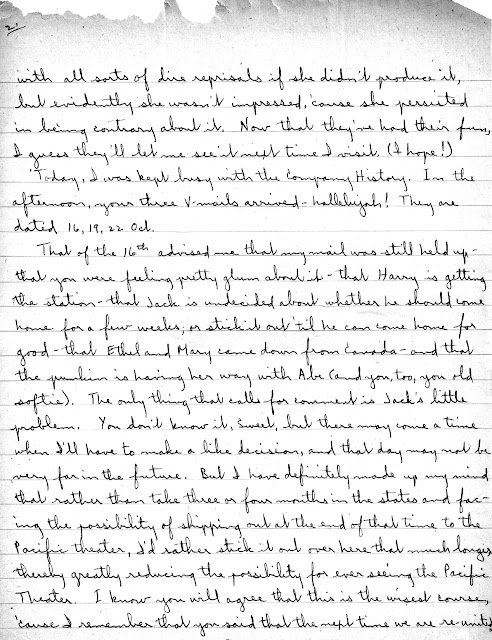 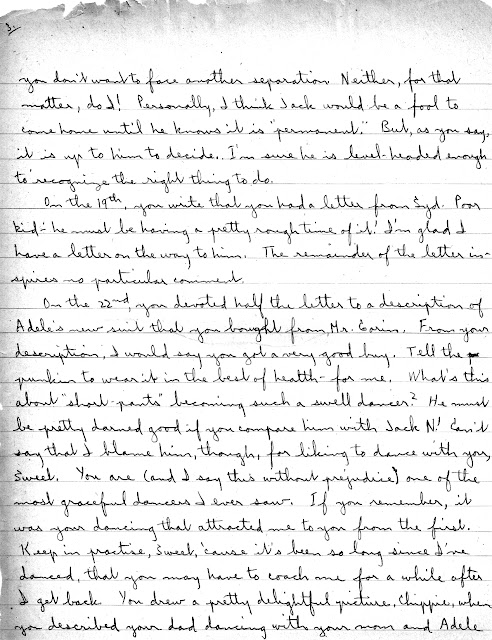 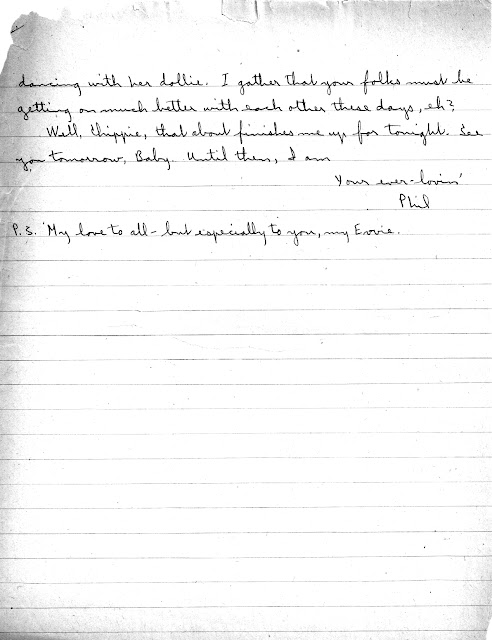 This morning there was quite a bit of mail. Your letters of Oct. 11,13 & 14 were present and letters from Jack N. and Jack S. I am enclosing Jack N's, in the hope that you'll find some time to reply. I am a little surprised at you for letting it go this long.

And now to answer your mail - I can't believe that anyone can make $8000 gambling in one day - or is just that I'm not used to that kind of money. I wouldn't mind getting used to it -

The "eye doctor" is an optometrist (I'm sure I've mentioned it before). Mom only needed glasses to read the newspaper, as she could never see the type clearly. I think I told you that also.

I like the idea of those courses you mentioned and only hope you get to take advantage of them. I'll bet you could teach "Elementary English Grammar"! “No kiddin’”!

That just about answers all three letters, except, of course, your loving sentiments. I'll get to that in due time.

I didn't get to a movie last night after all. I was too tired by the time I got Adele to bed, cleaned her shoes, washed the few things there were to wash, and straightened up. I try very hard to get away in the evenings, but just can't seem to manage it. I'm in need of some recreation, but I don't mind waiting for a chance, as long as I have some mail from you to keep my spirits up.

Mr. First, the notary public and insurance man a few doors away, is most anxious to have me learn the insurance business, so that I can be of help to him in my spare ??? time. It isn't a bad idea, for he pays well and I like to work for him. I do a bit of work for him from time to time in the evening. Usually I type some minutes for him or a letter or two and he gives me a dollar for about an hour's work, which isn't bad at all.

Goldie had a letter from Jack S, and he said he was put up for Sgt. and expects his stripe any day.

Since I'm just about out of news, I'll get on with the "sweet sentiments". Your letters only made me wish harder for the day when we will be reunited once more. The whole thing seems to be dragging along and I can't help getting rather impatient with it at times. Phil, darling, I adore you so much, and it's so hard to wait and wait and wait. It's as you say, "if 14 months is a long time, then all the time we'll be together after will be that much longer".

And so we come to the end of another day. I'm glad you at least had word from Eddie since it has been so long since we heard from him. As long as things keep going as they are I haven't a complaint though it wouldn't do me any good to complain. There are so many things that aren't as they should be - but they'll all be alright some day - they've just got to be! Good night for now, precious one, God bless you and keep you for
Your Eve

Eve, dearest,
Last night Klein and I went into town to visit with Evelyn and Bert. Evelyn's father, Mr. Cohen, was also there. He is a very nice old gentleman, and must have been very handsome in his day. He, Bert, and I played rummy for a while until supper time. Believe it or not, they eat supper at 10 P.M.! Evelyn received your letter, and had a great time teasing me about it. I asked her if I could see it, and you should have seen the reaction! Evelyn, Mr. Cohen, Bert and even Klein acted like I had committed murder or sumpin! No kiddin', Sweet, their shocked expressions and condemnation for presuming to ask to read my wife's letter, were so spontaneous and outraged, that I was dumbfounded. I'm still not sure whether they were kidding me or not as to whether they were really indignant at my request to read other people's mail, but I do know that I didn't get to see the letter. All the time, they kept talking among themselves (for my benefit) about whether they should answer your query about whether I make dates with other women over here. That, I knew, was strictly the bunk, ’cause I flatter myself that you wouldn't dream of asking them a question like that one. I told them as much, but that didn't deter them from ribbing me. By this time, I was most impatient to read your letter, and I threatened Evelyn with all sorts of dire reprisals if she didn't produce it, but evidently she wasn't impressed, ’cause she persisted in being contrary about it. Now that they've had their fun I guess they'll let me see it next time I visit. (I hope!)

Today, I was kept busy with the Company History. In the afternoon, your three V-mails arrived - hallelujah! They are dated 16, 19, 22 Oct.
That of the 16th advised me that my mail was still held up, that you were feeling pretty glum about it, that Harry is getting the station, that Jack is undecided about whether he should come home for a few weeks; or stick it out 'til he can come home for good, that Ethel and Mary came down from Canada, and that the punkin is having her way with Abe (and you, too, you old softie). The only thing that calls for comment is Jack's little problem. You don't know it, Sweet, but there may come a time when I'll have to make a like decision, and that day may not be very far in the future. But I have definitely made up my mind that rather than take three or four months in the States and facing the possibility of shipping out at the end of that time to the Pacific theater, I'd rather stick it out over here that much longer, thereby greatly reducing the possibility for ever seeing the Pacific Theater. I know you will agree that this is the wisest course, ’cause I remember that you said that the next time we are re-united you don't want to face another separation. Neither, for that matter, do I! Personally, I think Jack would be a fool to come home until he knows it is “permanent." But, as you say it is up to him to decide. I'm sure he is level-headed enough to recognize the right thing to do.
On the 19th, you write that you had a letter from Syd. Poor kid - he must be having a pretty rough time of it! I'm glad I have a letter on the way to him. The remainder of the letter inspires no particular comment.

On the 22nd you devoted half the letter to a description of Adele's new suit that you bought from Mr. Gorin. From your description, I would say you got a very good buy. Tell the punkin to wear it in the best of health - for me. What's this about "short-pants" becoming such a swell dancer? He must be pretty darned good if you compare him with Jack N! Can't say that I blame him, though, for liking to dance with you, Sweet. You are (and I say this without prejudice) one of the most graceful dancers I ever saw. If you remember, it was your dancing that attracted me to you from the first. Keep in practice, Sweet, 'cause it's been so long since I've danced, that you may have to coach me for a while after I get back. You drew a pretty delightful picture, Chippie, when you described your dad dancing with your mom and Adele dancing with her dollie. I gather that your folks must be getting on much better with each other these days, eh?

Well, Chippie, that about finishes me up for tonight. See you tomorrow, Baby. Until then, I am