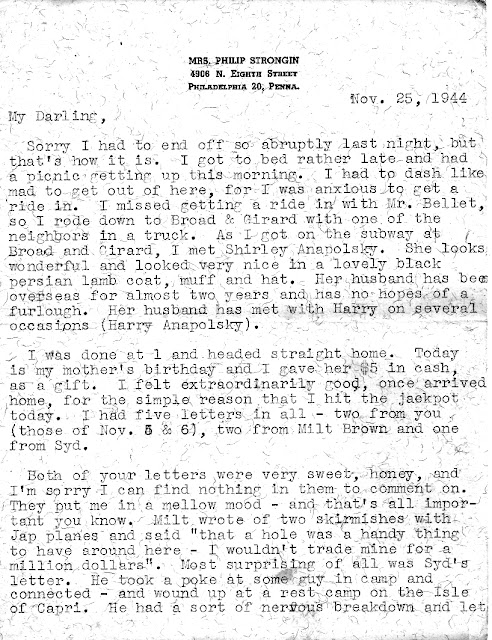 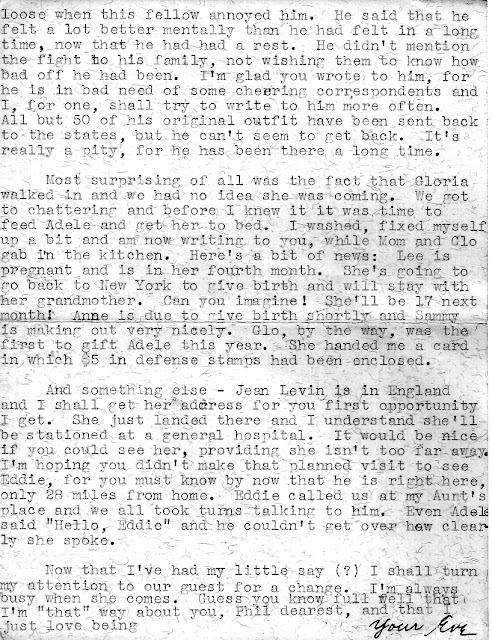 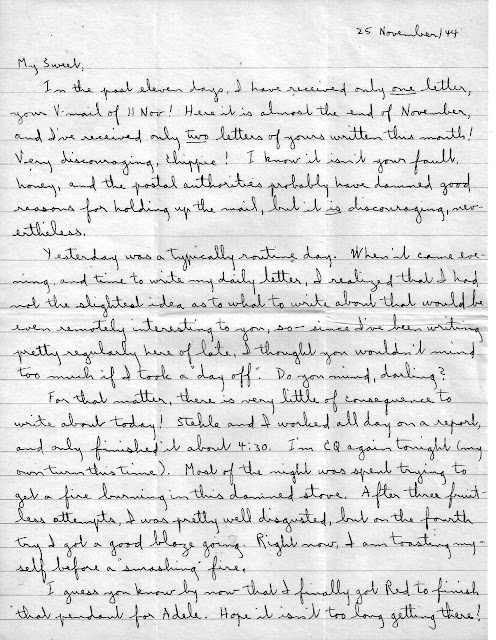 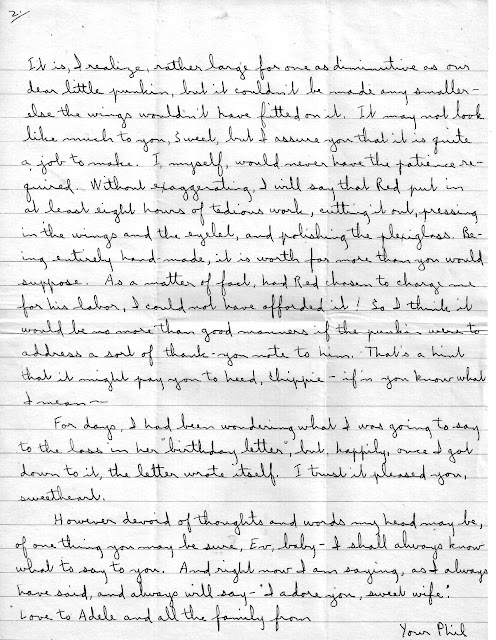 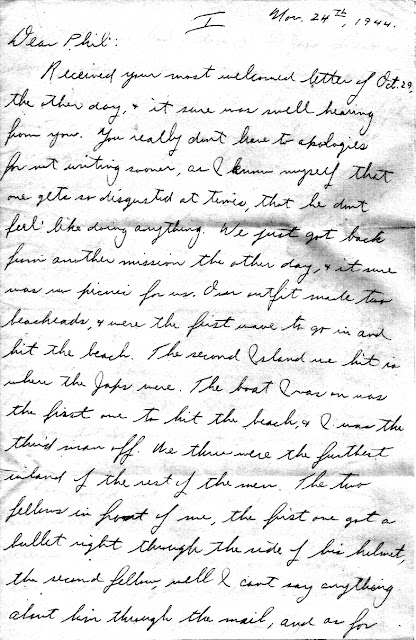 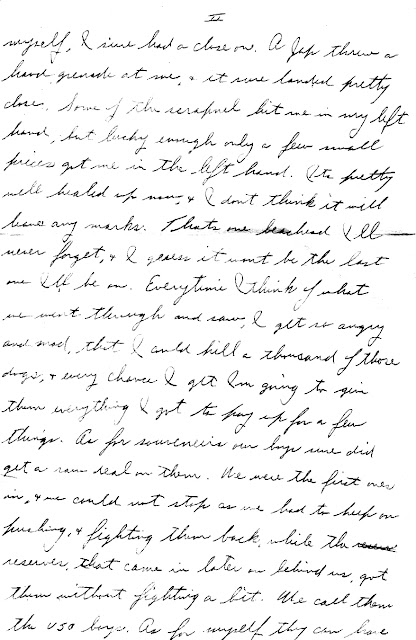 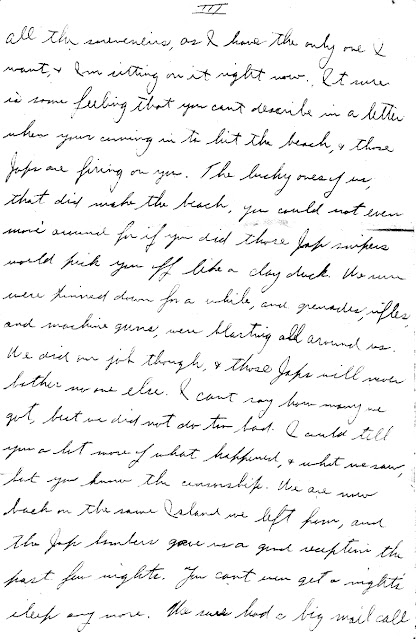 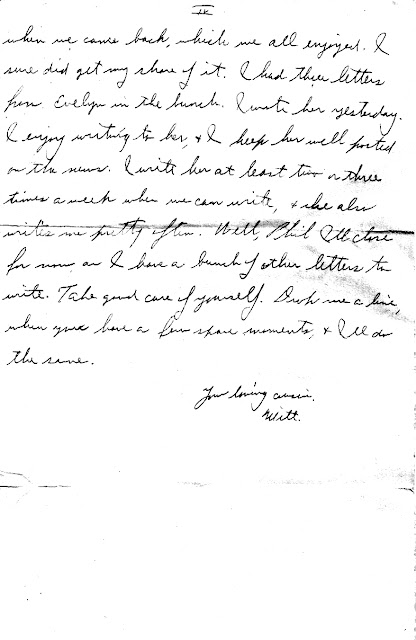 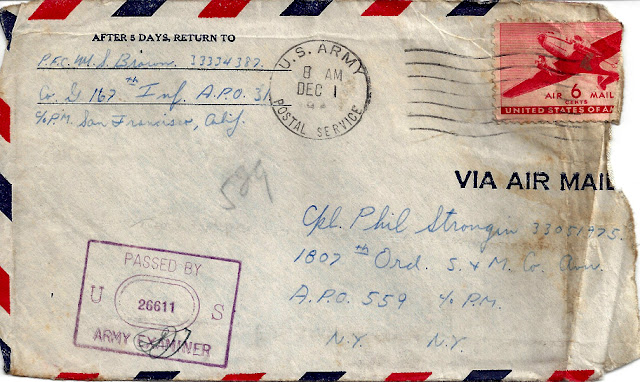 Sorry I had to end off so abruptly last night, but that's how it is. I got to bed rather late and had a picnic getting up this morning. I had to dash like mad to get out of here, for I was anxious to get a ride in. I missed getting a ride in with Mr. Bellet, so I rode down to Broad & Girard with one of the neighbors in a truck. As I got on the subway at Broad and Girard, I met Shirley Anapolsky. She looks wonderful and looked very nice in a lovely black persian lamb coat, muff and hat. Her husband has been overseas for almost two years and has no hopes of a furlough. Her husband has met with Harry on several occasions (Harry Anapolsky).

I was done at 1 and headed straight home. Today is my mother's birthday and I gave her $5 in cash, as a gift. I felt extraordinarily good, once arrived home, for the simple reason that I hit the jackpot today. I had five letters in all - two from you (those of Nov. 5 & 6), two from Milt Brown and one from Syd.

Both of your letters were very sweet, honey, and I'm sorry I can find nothing in them to comment on. They put me in a mellow mood - and that's all important you know.' Milt wrote of two skirmishes with Jap planes and said "that a hole was a handy thing to have around here - I wouldn't trade mine for a million dollars". Most surprising of all was Syd’s letter. He took a poke at some guy in camp and connected - and wound up at a rest camp on the Isle of Capri. He had a sort of nervous breakdown and let loose when this fellow annoyed him. He said that he felt a lot better mentally than he had felt in a long time, now that he had had a rest. He didn't mention the fight to his family, not wishing them to know how bad off he had been. I'm glad you wrote to him, for he is in bad need of some cheering correspondents and I, for one, shall try to write to him more often. All but 50 of his original outfit have been sent back to the States, but he can't seem to get back. It's really a pity, for he has been there a long time.

Most surprising of all was the fact that Gloria walked in and we had no idea she was coming. We got to chattering and before I knew it it was time to feed Adele and get her to bed. I washed, fixed myself up a bit and am now writing to you, while Mom and Glo gab in the kitchen. Here's a bit of news: Lee is pregnant and is in her fourth month. She's going to go back to New York to give birth and will stay with her grandmother. Can you imagine! She'll be 17 next month! Anne is due to give birth shortly and Sammy is making out very nicely, Glo, by the way, was the first to gift Adele this year. She handed me a card in which $5 in defense stamps had been enclosed.

And something else - Jean Levin is in England and I shall get her address for you first opportunity I get. She just landed there and I understand she'll be stationed at a general hospital. It would be nice if you could see her, providing she isn't too far away. I'm hoping you didn't make that planned visit to see Eddie, for you must know by now that he is right here, only 28 miles from home, Eddie called us at my Aunt’s place and we all took turns talking to him. Even Adele said "Hello, Eddie" and he couldn't get over how clearIy she spoke.

Now that I've had my little say (?) I shall turn my attention to our guest for a change. I'm always busy when she comes. Guess you know full well that I’m "that” way about you, Phil dearest, and that I just love being

My Sweet,
In the past eleven days, I have received only one letter, your V-mail of 11 Nov! Here it is almost the end of November, and I’ve received only two letters of yours written this month! Very discouraging, Chippie! I know it isn't your fault, honey, and the postal authorities probably have damned good reasons for holding up the mail, but it is discouraging, nevertheless.
Yesterday was a typically routine day. When it came evening, and time to write my daily letter, I realized that I had not the slightest idea as to what to write about that would be even remotely interesting to you, so - since I've been writing pretty regularly here of late, I thought you wouldn't mind too much if I took a “day off". Do you mind, darling?
For that matter, there is very little of consequence to write about today! Stahle and I worked all day on a report, and only finished at about 4:30. I'm CQ again tonight (my own turn this time). Most of the night was spent trying to get a fire burning in this damned stove. After three fruitless attempts, I was pretty well disgusted, but on the fourth try I got a good blaze going. Right now, I am toasting myself before a “smashing” fire.
I guess you know by now that I finally got Red to finish that pendant for Adele. Hope it is not too long getting there!

It is, I realize, rather large for one as diminutive as our dear little punkin, but it couldn’t be made any smaller, else the wings wouldn't have fitted on it. It may not look like much to you, Sweet, but I assure you that it is quite a job to make. I myself, would never have the patience required. Without exaggerating, I will say that Red put in at least eight hours of tedious work, cutting it out, pressing in the wings and the eyelet, and polishing the plexiglass. Being entirely hand-made, it is worth far more than you would suppose. As a matter of fact, had Red chosen to charge me for his labor, I could not have afforded it! So I think it would be no more than good manners if the punkin were to address a sort of thank-you note to him. That's a hint that it might pay you to heed, Chippie - if’n you know what I mean—
For days, I had been wondering what I was going to say to the lass in her birthday letter, but, happily, once I got down to it, the letter wrote itself. I trust it pleased you. sweetheart.

However devoid of thoughts and words my head may be, of one thing you may be sure, Ev, baby - I shall always know what to say to you. And right now I am saying, as I always have said, and always will say - “I adore you, sweet wife.” Love to Adele and all the family from

Received your most welcomed letter of Oct.29, the other day, & it sure was swell hearing from you. You really don’t have to apologize for not writing sooner, as I know myself that one gets so disgusted at times, that he doesn’t feel like doing anything. We just got back from another mission the other day, & it sure was no picnic for us. Our outfit made two beacheads, & were the first wave to go in and hit the beach. The second Island we hit is where the Japs were. The boat I was on was the first one to hit the beach, & l was the third man off. We three were the furthest inland of the rest at the men. The two fellows in front of me, the first one got a bullet right through the side of his helmet, the second fellow, well I can’t say anything about him through the mail, and as for myself, I sure had a close one. A Jap threw a hand grenade at me, & it sure landed pretty close, Some of the shrapnel hit me in my left hand, but lucky enough only a few small pieces got me in the left hand. It’s pretty well healed up now, & l don’t think it will leave any marks. Thats one beachhead I’ll never forget, & l guess it won’t be the last one I’ll be on. Every time I think of what we went through and saw, I get so angry and mad that l could kill a thousand of those dogs, & every chance I get I’m going to give them everything I got to pay up for a few things. As for souvenirs our boys sure did get a raw deal on them. We were the first ones in, & we could not stop as we had to keep on pushing & fighting them back, while the reserves that came in later on behind us, got them without fighting a bit. We call them the USO boys. As for myself, they can have all the souvenirs, as I have the only one I want, & I am sitting on it right now. It sure is some feeling that you can’t describe in a letter when your coming in to hit the beach, & those Japs are firing on you. The lucky ones of us, that did make the beach, you could not even move around, for if you did, those Jap snipers would pick you off like a clay duck. We sure were pinned down for a while, and grenades, rifles and machine guns, were blasting all around us. We did our job though, & those Japs will never bother no one else. I can’t say how many we got, but we did not do too bad. I would tell you a bit more of what happened, & what we saw, but you know the censorship. We are now back on the same island we left from, and the Jap bombers gave us a good reception the last few nights. You can’t even get a night’s sleep any more. We sure had a big mail call when we came back, which we all enjoyed. I sure did get my share of it. I had three letters from Evelyn in the bunch. I wrote her yesterday. l enjoy writing to her, & l keep her well posted on the news. I write her at least two or three times a week when we can write, & she also writes me pretty often. Well, Phil, I’ll close for now as I have a bunch of other letters to write. Take good care of yourself. Drop me a line, when you have a few spare moments, & l’ll do the same.

Your loving cousin,
Milt
Posted by Marilyn at 4:49 PM