Post #577 - February 11, 1945 Tonight You Are Supposed to Say Kadish for Your Father and Seems That There is a Large Mansion on the Yorkshire Moors Whose Hostess has invited G.I.'s and A Letter from Dot Cohen 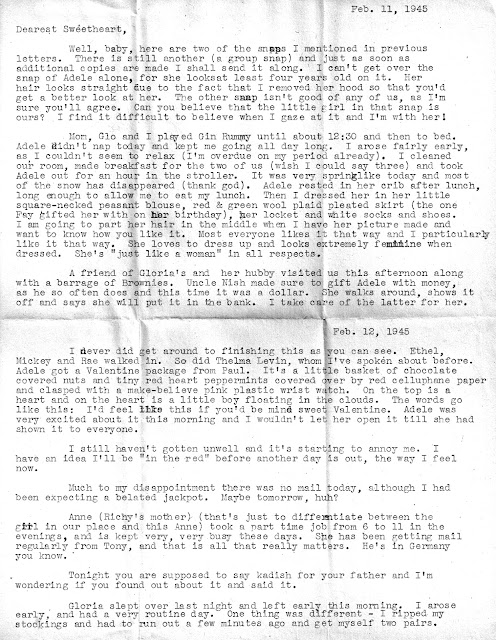 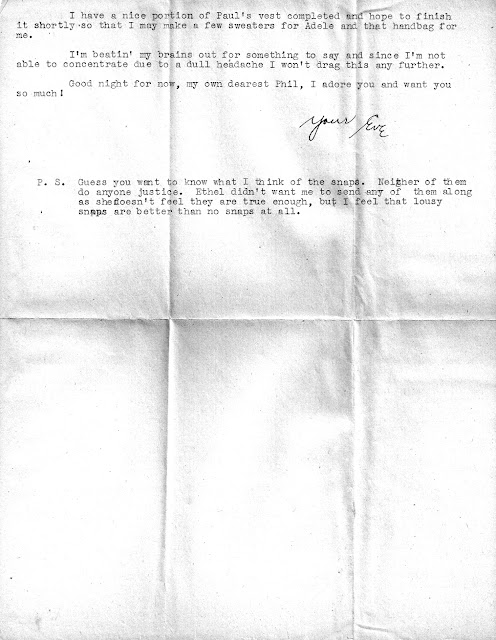 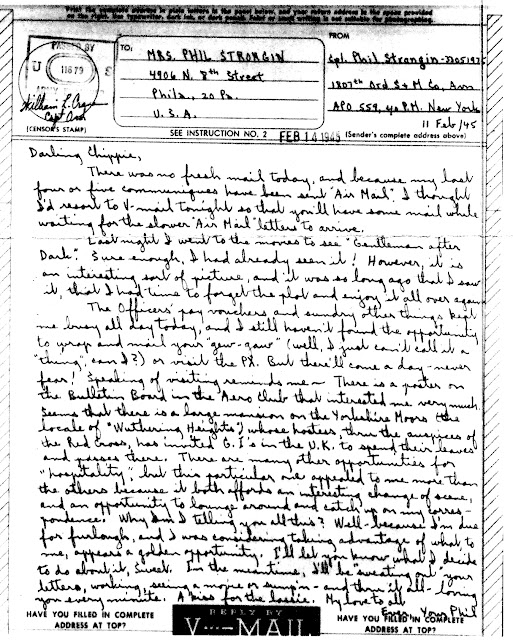 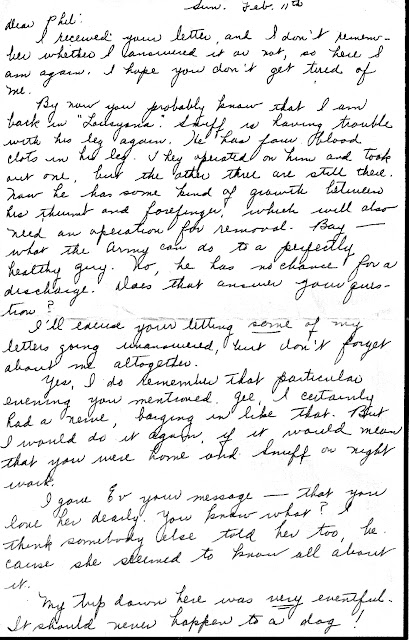 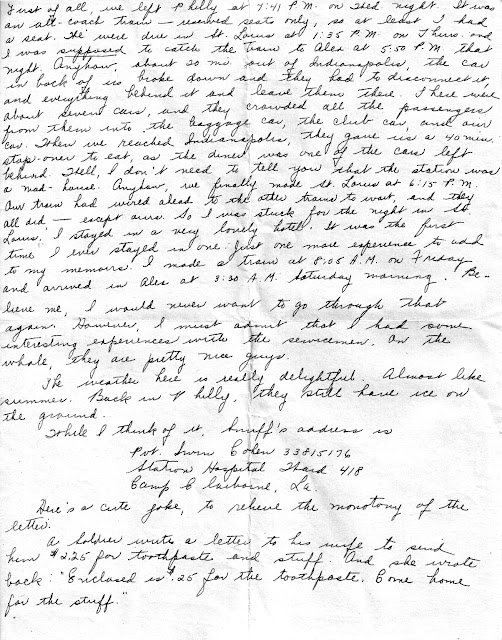 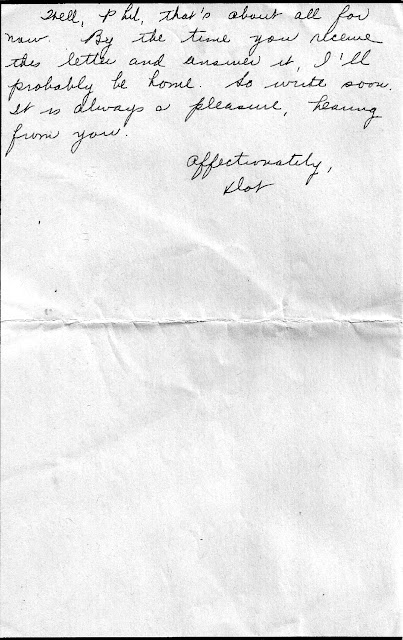 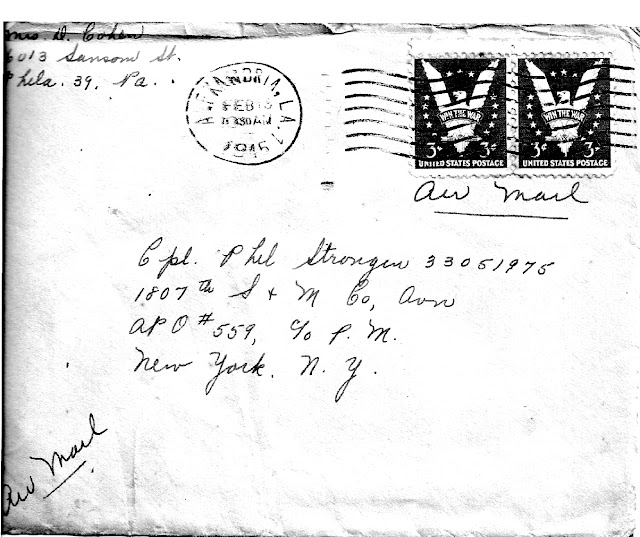 Well, baby, here are two of the snaps I mentioned in previous letters. There is still another (a group snap) and just as soon as additional copies are made I shall send it along. I can't get over the snap of Adele alone, for she looks at least four years old on it. Her hair looks straight due to the fact that I removed her hood so that you'd get a better look at her. The other snap isn't good of any of us, as I'm sure you'll agree. Can you believe that the little girl in that snap is ours? I find it difficult to believe when I gaze at it and I'm with her!

Mom, Glo and I played Gin Rummy until about 12:30 and then to bed. Adele didn't nap today and kept me going all day long. I arose fairly early, as I couldn't seem to relax (I'm overdue on my period already). I cleaned our room, made breakfast for the two of us (wish I could say three) and took Adele out for an hour in the stroller. It was very springlike today and most of the snow has disappeared (thank god). Adele rested in her crib after lunch, long enough to allow me to eat my lunch. Then I dressed her in her little square-necked peasant blouse, red & green wool plaid pleated skirt (the one Fay gifted her with on her birthday), her locket and white socks and shoes. I am going to part her hair in the middle when I have her picture made and want to know how you like it. Most everyone likes it that way and I particularly like it that way. She loves to dress up and looks extremely feminine when dressed. She's "just like a woman" in all respects.

A friend of Gloria's and her hubby visited us this afternoon along with a barrage of Brownies. Uncle Nish made sure to gift Adele with money, as he so often does and this time it was a dollar. She walks around, shows it off and says she will put it in the bank. I take care of the latter for her.

I never did get around to finishing this as you can see. Ethel, Mickey and Rae walked in. So did Thelma Levin, whom I've spoken about before. Adele got a Valentine package from Paul. It's a little basket of chocolate covered nuts and tiny red heart peppermints covered over by red cellophane paper and clasped with a make-believe pink plastic wrist watch. On the top is a heart and on the heart is a little boy floating in the clouds. The words go like this: I'd feel like this if you'd be mine sweet Valentine. Adele was very excited about it this morning and I wouldn't let her open it till she had shown it to everyone.

I still haven't gotten unwell and it's starting to annoy me. I have an idea I'll be "in the red" before another day is out, the way I feel now.

Much to my disappointment there was no mail today, although I had been expecting a belated jackpot. Maybe tomorrow, huh?

Anne (Richy's mother) (that's just to differentiate between the girl in our place and this Anne) took a part time job from 6 to 11 in the evenings, and is kept very, very busy these days. She has been getting mail regularly from Tony, and that is all that really matters. He's in Germany you know.

Tonight you are supposed to say kadish for your father and I'm wondering if you found out about it and said it.

Gloria slept over last night and left early this morning. I arose early, and had a very routine day. One thing was different - I ripped my stockings and had to run out a few minutes ago and get myself two pairs.

I have a nice portion of Paul's vest completed and hope to finish it shortly so that I may make a few sweaters for Adele and that handbag for me.

I'm beatin' my brains out for something to say and since I'm not able to concentrate due to a dull headache I won't drag this any further.

Good night for now, my own dearest Phil, I adore you and want you so much!

P. S. Guess you want to know what I think of the snaps. Neither of them do anyone justice. Ethel didn't want me to send any of them along as she doesn't feel they are true enough, but I feel that lousy snaps are better than no snaps at all.

There was no fresh mail today, and because my last four or five communiques have been send "Air Mail" I thought I’d resort to to V-mail tonight so that you'll have some mail while waiting for the slower “Air Mail” letters to arrive.

Last night I went to the movies to see "Gentleman after Dark." Sure enough, I had already seen it! However, it is an interesting sort of picture, and it was so long ago that I saw it, that I had time to forget the plot and enjoy it all over again.
The Officers’ pay vouchers and sundry other things kept me busy all day today, and I still haven't found the opportunity to wrap and mail your “gew-gaw” (well, I just can’t call it a “thing”, can I?) or visit the PX. But there'll come a day - never fear! Speaking of visiting reminds me—There is a poster on the Bulletin Board in the Aero Club that interested me very much! Seems that there is a large mansion on the Yorkshire Moors (the locale of “Wuthering Heights") whose hostess, thru the auspices of the Red Cross, has invited G.I.'s in the U.K., to spend their leaves and passes there. There are many other opportunities for "hospitality" but this particular one appealed to me more than the others because it both affords an interesting change of scene, and an opportunity to lounge around and catch up on on my correspondence. Why am I telling you all this? Well - because I'm due for furlough, and I was considering taking advantage of what, to me, appears a golden opportunity. I’ll let you know what I decide to do about it, Sweet. In the meantime, I’ll be “sweating out” your letters, working, seeing a movie or sump’n - and thru it all - loving you every minute. A kiss for the lassie. My love to all.
Ever, Your Phil
Sun. Feb. 11th [1945]
Dear Phil:
I received your letter, and I don’t remember whether I answered it or not, so here I am again. I hope you don’t get tired of me.
By now you probably know that I am back in “Lousyana.” Snuff is having trouble with his leg again. He has four blood clots in his leg. They operated on him and took out one, but the other three are still there. Now he has some kind of growth between his thumb and forefinger, which will also need an operation for removal. Boy—what the Army can do to a perfectly healthy guy. No, he has no chance for a discharge. Does that answer your question?
I’ll excuse your letting some of my letters going unanswered, but don’t forget about me altogether.
Yes, I do remember that particular evening you mentioned. Gee, I certainly had a nerve, barging in like that. But I would do it again, if it would mean that you were home and Snuff on night work.
I gave Ev your message—that you love her dearly. You know what? I think somebody else told her too, because she seemed to know all about it.
My trip down here was very eventful. It should never happen to a dog! First of all, we left Philly at 7:41 P.M. on Wed. night. It was an all-coach train—reserved seats only, so at least I had a seat. We were due in St. Louis at 1:35 P.M on Thurs. and I was supposed to catch the train to Alex. at 5:50 P.M. that night. Anyhow, about 20 mi. out of Indianapolis, the car in back of us broke down and they had to disconnect it, and everything behind it and leave them there. There were about seven cars, and they crowded all the passengers from them into the baggage car, the club car, and our car. When we reached Indianapolis, they gave us a 40 min. stop-over to eat, as the diner was one of the cars left behind. Well, I don’t need to tell you that the station was a mad-house. Anyhow, we finally made St. Louis at 6:15 P.M. Our train had wired ahead to the other trains to wait, and they all did,—except ours. So I was stuck for the night in St. Louis. I stayed in a very lovely hotel. It was the first time I ever stayed in one. Just one more experience to add to my memoirs. I made a train at 8:05 A.M. on Friday and arrived in Alex. at 3:30 A.M. Saturday morning. Believe me, I would never want to go through that again. However, I must admit that I had some interesting experiences with the servicemen. On the whole, they are pretty nice guys.
The weather here is really delightful. Almost like summer. Back in Philly, they still have ice on the ground.
While I think of it, Snuff’s address is
Pvt. Irvin Cohen 33815176
Station Hospital Ward 418
Camp Claiborne, La.
Here’s a cute joke, to relieve the monotony of the letter:
A Soldier writes a letter to his wife to send him $2.25 for toothpaste and stuff. And she wrote back: “Enclosed is $.25 for the toothpaste. Come home for the stuff.”
Well, Phil, that’s about all for now. By the time you receive this letter and answer it, I’ll probably be home. So write soon. It is always a pleasure, hearing from you.
Affectionately,
Dot
Posted by Marilyn at 7:02 AM