Post #593 - March 1, 1945 Anne had a Little Girl, Who will be Named Barbara Phyllis and I Just Thank You Most Humbly for Continuing to Write So Faithfully 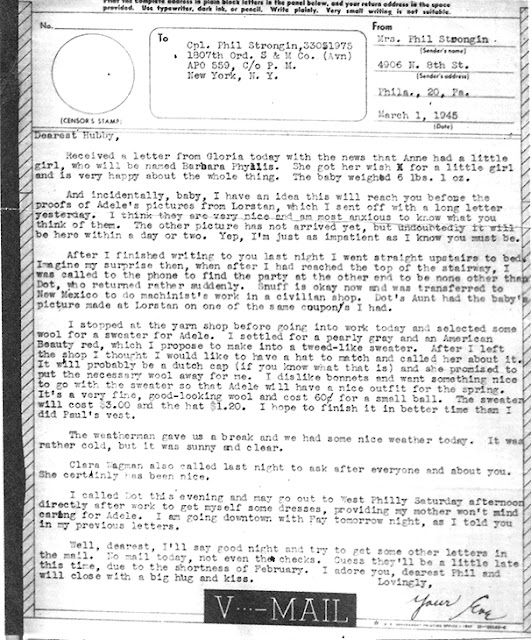 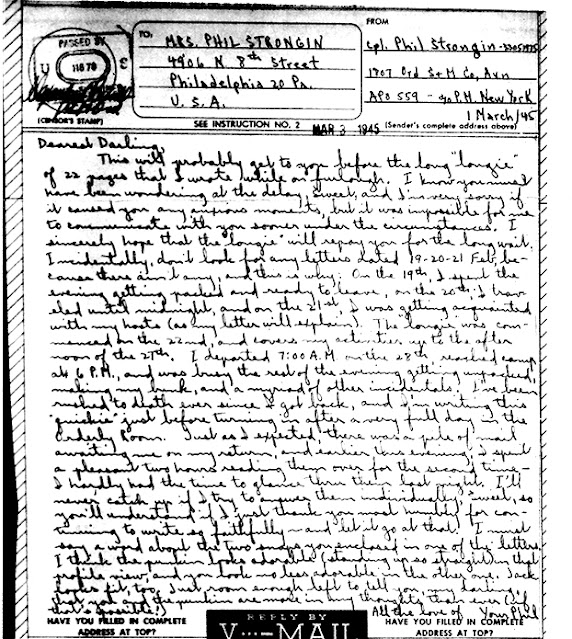 March 1, 1945Dearest Hubby,Received a letter from Gloria today with the news that Anne had a little girl, who will be named Barbara Phyllis. She got her wish for a little girl and is very happy about the whole thing. The baby weighed 6 lbs. 1 oz.And incidentally, baby, I have an idea this will reach you before the proofs of Adele's pictures from Lorstan, which I sent off with a long letter yesterday, I think they are very nice and am most anxious to know what you think of them. The other picture has not arrived yet, but undoubtedly it will be here within a day or two. Yep, I'm just as impatient as I know you must be.After I finished writing to you last night I went straight upstairs to bed. Imagine my surprise then, when after I had reached the top of the stairway, I was called to the phone to find the party at the other end to be none other than Dot, who returned rather suddenly. Snuff is okay now and was transferred to New Mexico to do machinist's work in a civilian shop. Dot's Aunt had the baby’s picture made at Lorstan on one of the same coupons I had.I stopped at the yarn shop before going into work today and selected some wool for a sweater for Adele. I settled for a pearly gray and an American Beauty red, which I propose to make into a tweed-like sweater. After I left the shop I thought I would like to have a hat to match and called her about it. It will probably be a dutch cap (if you know what that is) and she promised to put the necessary wool away for me. I dislike bonnets and want something nice to go with the sweater so that Adele will have a nice outfit for the spring. It's a very fine, good-looking wool and cost 60¢ for a small ball. The sweater will cost $3.00 and the hat $1.20. I hope to finish it in better time than I did Paul's vest.The weatherman gave us a break and we had some nice weather today. It was rather cold, but it was sunny and clear.Clara Wagman also called last night to ask after everyone and about you. She certainly has been nice.I called Dot this evening and may go out to West Philly Saturday afternoon directly after work to get myself some dresses, providing my mother won't mind caring for Adele. I am going downtown with Fay tomorrow night, as I told you in my previous letters.Well, dearest, I'll say good night and try to get some other letters in the ma!l. No mail today, not even the checks. Guess they'll be a little late this time, due to the shortness of February. I adore you, dearest Phil and will close with a big hug and kiss.Your Eve
1 March 1945
Dearest Darling,
This will probably get to you before the “longie” of 22 pages that I wrote while on furlough. I know you must have been wondering at the delay, Sweet, and I’m very sorry if it caused you any anxious moments, but it was impossible for me to communicate with you sooner under the circumstances. I sincerely hope that the “longie” will repay you for the long wait. Incidentally, don’t look for any letters dated 19-20-21 Feb., because there ain’t any, and this is why: On the 19th, I spent the evening getting packed and ready to leave, on the 20th, I traveled until midnight, and on the 21st, I was getting acquainted with my hosts (as my letter will explain). The “longie” was commenced on the 22nd, and covers my activities up to the afternoon of the 27th. I departed 7:00 A.M. on the 28th, reached camp at 6 P.M., and was busy the rest of the evening getting unpacked, making my bunk, and a myriad of other incidentals. I’ve been rushed to death ever since I got back, and I’m writing this “quickie” just before turning in after a very full day in the Orderly Room. Just as I expected, there was a pile of mail awaiting me on my return, and earlier this evening, I spent a pleasant two hours reading them over for the second time—I hardly had the time to glance thru them last night. I’ll never catch up if I try to answer them individually, Sweet, so you’ll understand if I just thank you most humbly for continuing to write so faithfully—and let it go at that. I must say a word about the two snaps you enclosed in one of the letters. I think the punkin looks adorable (standing up so straight) in that profile view, and you look no less adorable in the other one. Jack looks fit, too. Just room enough left to tell you, my darling, that you and the punkin are more in my thoughts than ever (if that’s possible!)
All the love of
Your Phil
Posted by Marilyn at 7:31 AM