Post #602 - March 12, 1945 I Promised Ruth I'd Go to Frankford Avenue with Her Immediately After Work and Help Her Select a New Dress and What I Wouldn’t Give to be Comfortably Ensconced in that “Home Sweet Home” of Mine! 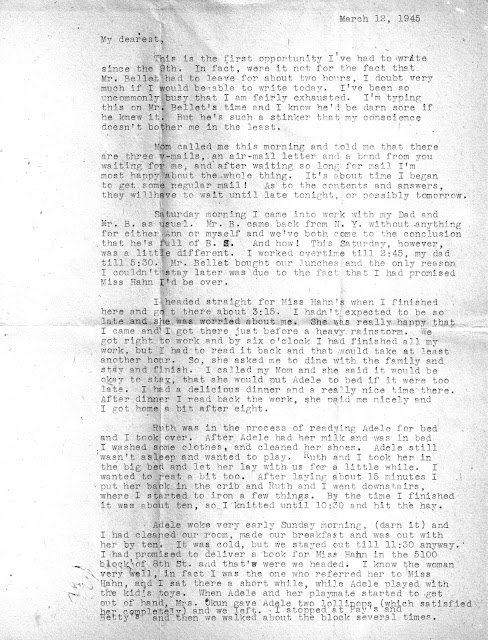 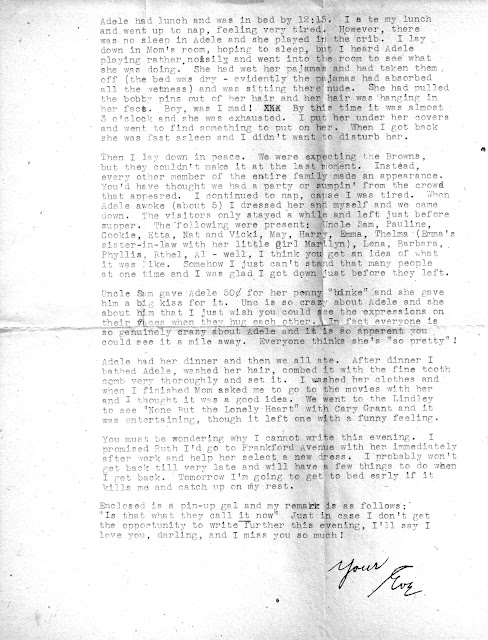 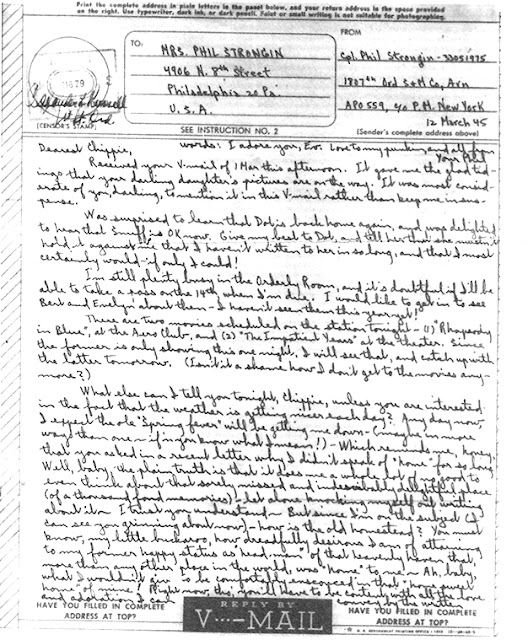 This is the first opportunity I've had to write since the 9th. In fact, were it not for the fact that Mr. Bellet had to leave for about two hours, I doubt very much if I would be able to write today. I've been so uncommonly busy that I am fairly exhausted. I'm typing this on Mr. Bellet’s time and I know he'd be darn sore if he knew it. But he's such a stinker that my conscience doesn't bother me in the least.

Mom called me this morning and told me that there are three v-mails, an air-mail letter and a bond from you waiting for me, and after waiting so long for mail I'm most happy about the whole thing. It's about time I began to get some regular mail! As to the contents and answers, they will have to wait until late tonight, or possibly tomorrow.

Saturday morning I came into work with my Dad and Mr. B, as usual. Mr. B. came back from N. Y. without anything for either Ann or myself and we've both come to the conclusion that he's full of B.S. And how! This Saturday, however, was a little different. I worked overtime till 2:45, my dad, till 5:30. Mr. Bellet bought our lunches and the only reason I couldn't stay later was due to the fact that I had promised Miss Hahn I'd be over.

I headed straight for Miss Hahn's when I finished here and got there about 3:15. I hadn't expected to be so late and she was worried about me. She was really happy that I came and I got there just before a heavy rainstorm. We got right to work and by six o'clock I had finished all my work, but I had to read it back and that would take at least another hour. So, she asked me to dine with the family and stay and finish. I called my Mom and she said it would be okay to stay; that she would put Adele to bed if it were too late. I had a delicious dinner and a really nice time there. After dinner I read back the work, she paid me nicely and I got home a bit after eight.

Ruth was in the process of readying Adele for bed and I took over. After Adele had her milk and was in bed I washed some clothes, and cleaned her shoes. Adele still wasn't asleep and wanted to play. Ruth and I took her in the big bed and let her lay with us for a little while. I wanted to rest a bit too. After laying about 15 minutes I put her back in the crib and Ruth and I went downstairs, where I started to iron a few things. By the time I finished it was about ten, so I knitted until 10:30 and hit the hay.

Adele woke very early Sunday morning, (darn it) and I had cleaned our room, made our breakfast and was out with her by ten. It was cold, but we stayed out till 11:30 anyway. I had promised to deliver a book for Miss Hahn in the 5100 block of 8th St. and that's where we headed. I know the woman very well, in fact I was the one who referred her to Miss Hahn, and I sat there a short while, while Adele played with the kid's toys. When Adele and her playmate started to get out of hand, Mrs. Okun gave Adele two lollipops (which satisfied her, completely) and we left. I stopped at Fay's and Betty's and then we walked about the block several times,

Adele had lunch and was in bed by 12:15. I ate my lunch and went up to nap, feeling very tired. However, there was no sleep in Adele and she played in the crib. I lay down in Mom's room, hoping to sleep, but I heard Adele playing rather noisily and went into the room to see what she was doing. She had wet her pajamas and had taken them off (the bed was dry - evidently the pajamas had absorbed all the wetness) and was sitting there nude. She had pulled the bobby pins out of her hair and her hair was hanging in her face. Boy, was I mad! By this time it was almost 3 o'clock and she was exhausted. I put her under her covers and went to find something to put on her. When I got back she was fast asleep and I didn't want to disturb her.

Then I lay down in peace. We were expecting the Browns, but they couldn't make it at the last moment. Instead, every other member of the entire family made an appearance, You'd have thought we had a party or sumpin' from the crowd that appeared. I continued to nap, cause I was tired. When Adele awoke (about 5) I dressed her and myself and we came down. The visitors only stayed a while and left just before supper. The following were present: Uncle Sam, Pauline, Cookie, Etta, Nat and Vicki, May, Harry, Emma, Thelma (Emma's, sister-in-law with her little girl Marilyn), Lena, Barbara, Phyllis, Ethel, Al - well, I think you get an idea of what it was like. Somehow I just can't stand that many people at one time and I was glad I got down just before they left,

Adele had her dinner and then we all ate. After dinner I bathed Adele, washed her hair, combed it with the fine tooth comb very thoroughly and set it. I washed her clothes and when I finished Mom asked me to go to the movies with her and I thought it was a good idea. We went to the Lindley to see "None But the Lonely Heart" with Cary Grant and it was entertaining, though it left one with a funny feeling.

You must be wondering why I cannot write this evening. I promised Ruth I'd go to Frankford Avenue with her immediately after work and help her select a new dress. I probably won't get back till very late and will have a few things to do when I get back. Tomorrow I'm going to get to bed early if it kills me and catch up on my rest.

Enclosed is a pin-up gal and my remark is as follows: "Is that what they call it now" Just in case I don't get the opportunity to write further this evening, I'll say I love you, darling, and I miss you so much!

Received your V-mail of 1 Mar. this afternoon. It gave me the glad tidings that your darling daughter's pictures are on the way. It was most considerate of you, darling, to mention it in this V-mail rather than keep me in suspense.

Was surprised to learn that Dot is back home again, and was delighted to hear that Snuff is OK now. Give my best to Dot, and tell her that she mustn’t hold it against me that haven't written to her in so long, and that I most certainly would—if only I could!

I'm still plenty busy in the Orderly Room, and it is doubtful if I’ll be able to take a pass on the 14th, when I’m due. I would like to get in to see Bert and Evelyn about then—I haven’t seen them this year yet!
There are two movies scheduled on the station tonight (1) “Rhapsody in Blue”, at the Aero Club, and (2) "The Impatient Years” at the theater. Since the former is only showing this one night, I will see that, and catch up with the latter tomorrow. (Isn’t it a shame how I don’t get to the movies anymore?)

What else can I tell you tonight, Chippie, unless you are interested in the fact that the weather is getting nicer each day? Any day now, I expect the ole “Spring fever” will be getting me down - (maybe in more ways than one—if’n you know what I mean!) - Which reminds me honey, that you asked in a recent letter why I didn't speak of home for so long. Well, baby, the plain truth is that it does me a whole lot of no good to even think about that sorely missed and indescribably delightful place, (of a thousand fond memories) - let alone knocking myself out writing about it—I trust you understand—But since I’m on the subject (I can see you grinning about now)—how is the old homestead? You must know, my little buckaroo, how dreadfully desirous I am of attaining to my former happy status as “head man” of that heavenly haven, that more than any other place in the world, was “home” to me—Ah, baby, what I wouldn’t give to be comfortably ensconced in that “home sweet home” of mine! Right now, tho’, you’ll have to be content with all the love and adoration I can convey by the written words: I adore you, Ev. Love to my punkin, and all from