Post #635 - April 22, 23, 1945 I Wonder If You’re Familiar With the Favorite Exclamation of the G.I. - "Oh, My Aching Back"?? and If Adele Doesn't Have Enough Scarlet Fever Serum in Her Now to Prevent Her from Getting the Disease She Never Will 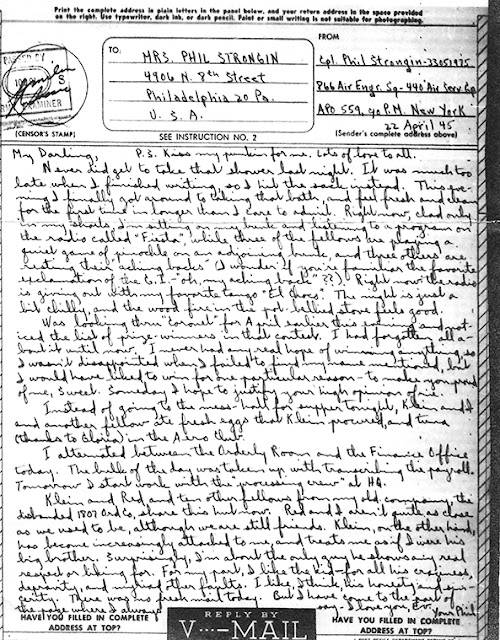 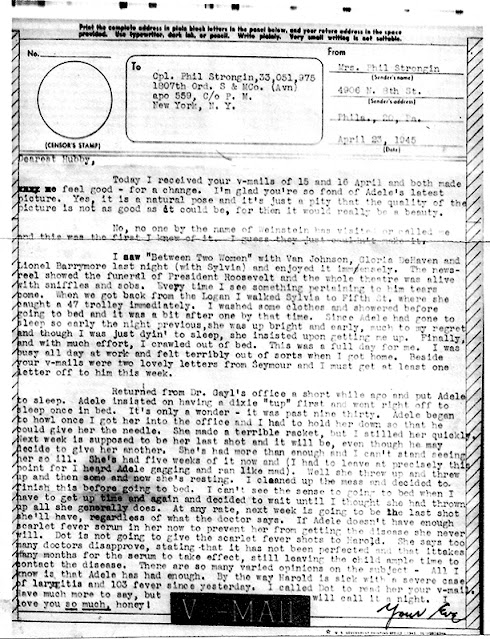 Never did get to take that shower last night. It was much too late when I finished writing, so I hit the sack instead. This evening I finally got around to taking that bath, and feel fresh and clean for the first time in longer than I care to admit. Right now, clad only my shorts, I'm sitting on my bunk and listening to a program on the radio called "Fiesta", while three of the fellows are playing a quiet game of pinochle on an adjoining bunk, and three others are resting their “aching backs” (I wonder if you’re familiar with the favorite exclamation of the G.I. - "oh, my aching back"??). Right now, the radio is giving out with my favorite tango "El Choco". The night is bit chilly, and the wood fire in the pot-bellied stove feels good.

Was looking thru "Coronet" for April earlier this evening and noticed the list of prize-winners in that contest. I had forgotten all about it until now. I never had any real hope of winning anything, so I wasn't disappointed when I failed to find my name mentioned, but I would have liked to win for one particular reason - to make you proud of me, Sweet. Someday I hope to justify your high opinion of me.
Instead of going to the mess hall for supper tonight, Klein and I and another fellow ate fresh eggs that Klein procured, and tuna (thanks to Gloria) in the Aero Club.

I alternated between the Orderly Room, and the Finance Office today. The bulk of the day was taken up with transcribing the payroll. Tomorrow I start work with the “processing crew" at HQ.

Klein and Red and ten other fellows from my old company, the disbanded 1808 Ord. Co., share this hut now. Red and I aren't quite as close as we used to be, although we are still friends. Klein, on the other hand, has become increasingly attached to me and treats me as if I were his big brother. Surprisingly, I'm about the only guy he shows any real respect or liking for. For my part, I like the kid—for all his craziness, depravity, and myriad other faults. I like, I think, his honesty and sincerity. There was no fresh mail today. But I have come to the part of the page where I always say—I love you, Ev.
Your Phil
P.S. Kiss my punkin for me. Lots of love to all.

Today I received your v-mails of 15 and 16 April and both made me me feel good - for a change. I'm glad you're so fond of Adele's latest picture. Yes, it is a natural pose and it's just a pity that the quality of the picture is not as good as it could be, for then it would really be beauty.

No, no one by the name of Weinstein has visited or called me and this was the first I knew of it. I guess they just couldn’t make it.

I saw "Between Two Women" with Van Johnson, Gloria DeHaven and Lionel Barrymore last night (with Sylvia) and enjoyed it immensely. The news reel showed the funeral of President Roosevelt and the whole theatre was alive with sniffles and sobs. Every time I see something pertaining to him tears come. When we got back from the Logan I walked Sylvia to Fifth St. where she caught a 47 trolley immediately. I washed some clothes and showered before going to bed and it was a bit after one by that time. Since Adele had gone to sleep so early the night previous, she was up bright and early, much to my regret and though I was just dyin' to sleep, she insisted upon getting me up. Finally, and with much effort, I crawled out of bed. This was a full day for me. I was busy all day at work and felt terribly out of sorts when I got home. Beside your v-mails were two lovely letters from Seymour and I must get at least one letter off to him this week.

Returned from Dr. Gayl's office a short while ago and put Adele to sleep. Adele insisted on having a dixie "tup" first and went right off to sleep once in bed. It's only a wonder - it was past nine thirty. Adele began to howl once I got her into the office and I had to hold her down so that he could give her the needle. She made a terrible racket, but I stilled her quickly. Next week is supposed to be her last shot and it will be, even though he may decide to give her another. She’s had more than enough and I can't stand seeing her so ill. She's had five weeks of it now and (I had to leave at precisely this point for I heard Adele gagging and ran like mad). Well she threw up and threw up and then some and now she's resting. I cleaned up the mess and decided to finish this before going to bed. I can't see the sense to going to bed when I have to get up time and again and decided to wait until I thought she had thrown up all she generally does. At any rate, next week is going to be the last shot she'll have, regardless of what the doctor says. If Adele doesn't have enough scarlet fever serum in her now to prevent her from getting the disease she never will. Dot is not going to give the scarlet fever shots to Harold. She says too many doctors disapprove, stating that it has not been perfected and that it takes many months for the serum to take effect, still leaving the child ample time to contact the disease. There are so many varied opinions on the subject - All I know is that Adele has had enough. By the way Harold is sick with a severe case or laryngitis and 103 fever since yesterday. I called Dot to read her your v-mail. Have much more to say, but will call it night. I love you so much, honey!
Your Eve
Posted by Marilyn at 1:13 PM