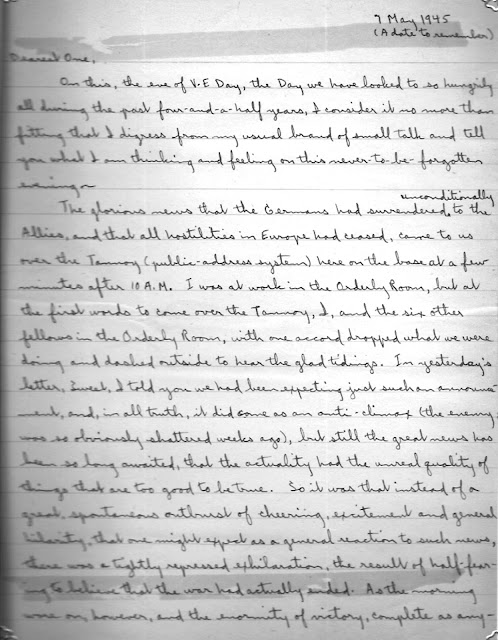 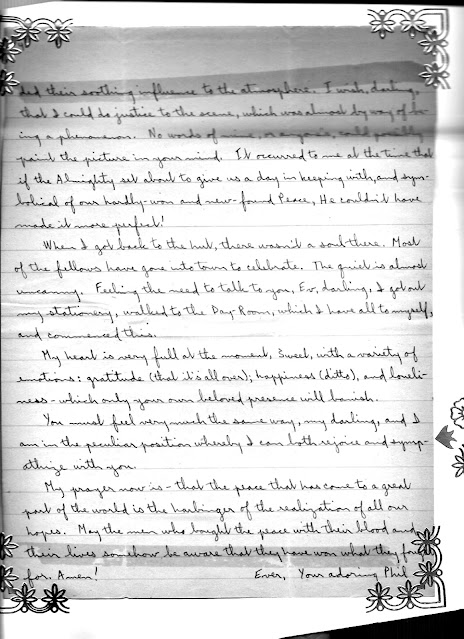 7 May 1945
(A date to remember)
Dearest One,
On this, the eve of V-E Day, the Day we have looked to so hungrily all during the past four-and-a-half years, I consider it no more than fitting that I digress from my usual brand of small talk and tell you what I am thinking and feeling on this never-to-be-forgotten evening—
The glorious news that the Germans had surrendered unconditionally to the Allies, and that all hostilities in Europe had ceased, came to us over the Tannoy (public-address system) here on the base at a few minutes after 10 A.M. I was at work in the Orderly Room, but at the first words to come over the Tannoy, I, and the six other fellows in the Orderly Room, with one accord dropped what we were doing and dashed outside to hear the glad tidings. In yesterday's letter, Sweet, I told you we had been expecting just such an announcement, and in all truth, it did come as an anti-climax (the enemy was so obviously shattered weeks ago), but still the great news has been so long awaited, that the actuality had the unreal quality of things that are too good to be true. So it was that instead of a great spontaneous outburst of cheering, excitement and general hilarity that one night expect as a general reaction to such news, there was a tightly repressed exhilaration, the result of half-fearing to believe that the war had actually ended. As the morning wore on, however, and the enormity of victory, complete as any, did their soothing influence to the atmosphere. I wish, darling, that I could do justice to the scene, which was almost by way of being a phenomenon. No words of mine, or anyone’s, could possibly paint the picture in your mind. It occurred to me at the time that if the Almighty set about to give us a day in keeping with, and symbolical of our hardly-won and new-found Peace, He couldn't have made it more perfect!
When I got back to the hurt, there wasn't a soul there. Most of the fellows have gone into town to celebrate. The quiet is almost uncanny. Feeling the need to talk to you, Ev, darling, I got out my stationery, walked to the Day-Room, which I have all to myself and commenced this.

My heart is very full at the moment, Sweet, with a variety of emotions: gratitude (that it's all over); happiness (ditto), and loneliness - which only your own beloved presence will banish.

You must feel very much the same way, my darling, and I am in the peculiar position whereby I can both rejoice and sympathize with you.
My prayer now is that the peace that has come to a great part of the world is the harbinger of the realization of all our hopes. May the men who bought the peace with their blood and their lives somehow be aware that they have won what they fought for. Amen!

Ever, Your adoring Phil
Posted by Marilyn at 10:35 AM