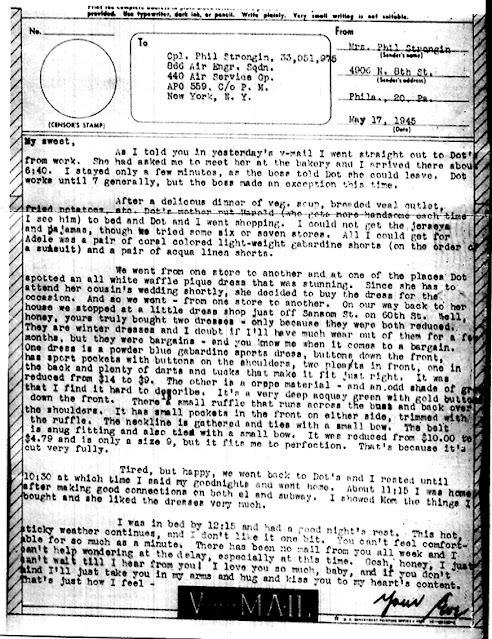 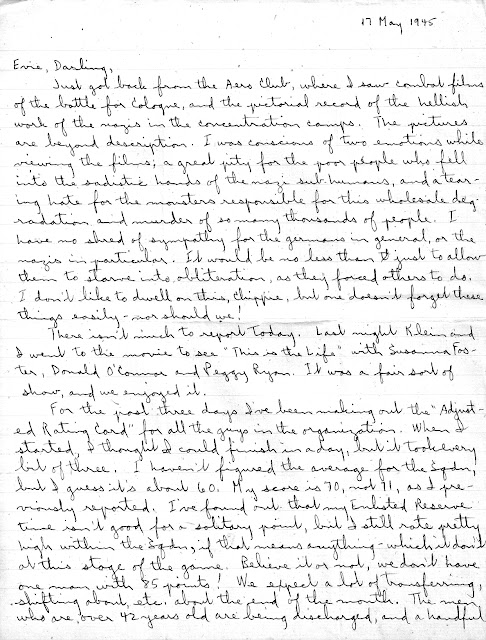 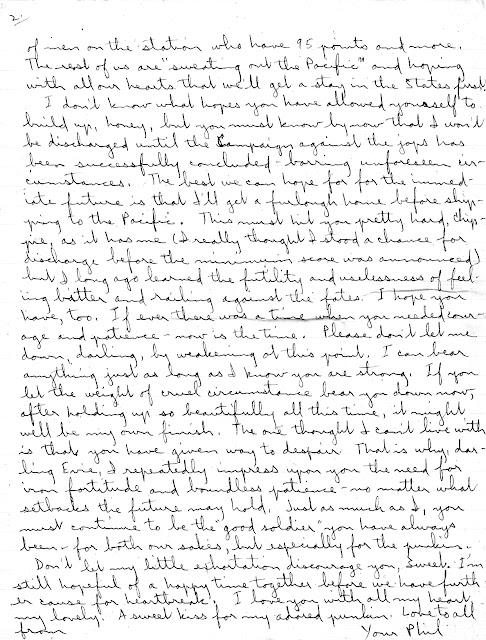 As I told you in yesterday's v-mail I went straight out to Dot’s from work. She had asked me to meet her at the bakery and I arrived there about 6:40. I stayed only a few minutes, as the boss told Dot she could leave. Dot works until 7 generally, but the boss made an exception this time.

After a delicious dinner of veg. soup, breaded veal cutlet, fried potatoes, etc. Dot’s mother put Harold (he gets more handsome each time I see him) to bed and Dot and I went shopping. I could not get the jerseys and pajamas, though we tried some six or seven stores. All I could get for Adele was a pair of coral colored light-weight gabardine shorts (on the order a sunsuit) and a pair of acqua linen shorts.

We went from one store to another and at one of the places Dot spotted an all white waffle pique dress that was stunning. Since she has to attend her cousin's wedding shortly, she decided to buy the dress for the occasion. And so we went - from one store to another. On our way back to her house we stopped at a little dress shop just off Sansom St. on 60th St. Well, honey, yours truly bought two dresses only because they were both reduced. They are winter dresses and I doubt if I'll have much wear out of them for a months, but they were bargains - and you know me when it comes to a bargain. One dress is a powder blue gabardine sports dress, buttons down the front, has sport pockets with buttons on the shoulders, two pleats in front, one in the back and plenty of darts and tucks that make it fit just right. It was reduced from $14 to $9. The other is a crepe material - and an odd shade of green that I find it hard to describe. It's a very deep acquay green with gold buttons down the front. There is a small ruffle that runs across the bust and back over the shoulders. It has small pockets in the front on either side, trimmed with the ruffle. The neckline is gathered and ties with a small bow. The belt is snug fitting and also tied with a small bow. It was reduced from $10.00 to $4.79 and is only a size 9, but it fits me to perfection. That's because it's cut very fully.

Tired, but happy, we went back to Dot's and I rested until 10:30 at which time I said my goodnights and went home. About 11:15 I was home after making good connections on both el and subway. I showed Mom the things I bought and she liked the dresses very much.

I was in bed by 12:15 and had a good night’s rest. This hot, sticky weather continues, and I don't like it one bit. You can't feel comfortable for so much as a minute. There has been no mail from you all week and I can't help wondering at the delay, especially at this time. Gosh, honey, I just can't wait till I hear from you! I love you so much, baby, and if you don't mind I'll just take you in my arms and hug and kiss you to my heart’s content. That's just how I feel -
Your Eve

Just got back from the Aero Club, where I saw combat films of the battle for Cologne, and the pictorial record of the hellish work of the nazis in the concentration camps. The pictures are beyond description. I was conscious of two emotions while viewing the films; a great pity for the poor people who fell into the sadistic hands of the nazi sub-humans, and a tearing hate for the monsters responsible for this wholesale degradation and murder of so many thousands of people. I have no shred of sympathy for the germans in general, or the nazis in particular. It would be no less than just to allow them to starve into obliteration, as they forced others to do. I don't like to dwell on this, Chippie, but one doesn’t forget these things easily - nor should we!

There isn't much to report today. Last night Klein and I went to the movie to see "This is the Life” with Susanna Foster, Donald O'Connor and Peggy Ryan. It was a fair sort of show, and we enjoyed it.

For the past three days I've been making out the "Adjusted Rating Card” for all the guys in the organization. When I started, I thought I could finish in a day, but it took every bit of three. I haven't figured the average for the Sqdn., but I guess it's about 60. My score is 70, not 71, as I previously reported. I've found out that my Enlisted Reserve time isn't good for a solitary point, but I still rate pretty high within the Sqdn., if that means anything which—it don’t at this stage of the game. Believe it or not, we don’t have one man with 85 points! We expect a lot of transferring, shifting about, etc, about the end of the month. The men who are over 42 years old are being discharged, and a handful of men on the station who have 95 points and more. The rest of us are "sweating out the Pacific” and hoping with all our hearts that we'll get a stay in the States first.

I don't know what hopes you have allowed yourself to build up, honey, but you must know by now that I won't be discharged until the campaign against the japs has been successfully concluded - barring unforeseen circumstances. The best we can hope for for the immediate future is that I'll get a furlough home before shipping to the Pacific. This must hit you pretty hard, Chippie, as it has me (I really thought I stood a chance for discharge before the minimum score was announced) but I long ago learned the futility and uselessness of feeling bitter and railing against the fates. I hope you have, too. If ever there was a time when you needed courage and patience - now is the time. Please don't let me down, darling, by weakening at this point. I can bear anything just as long as I know you are strong. If you let the weight of cruel circumstance bear you down now, after holding up so beautifully all this time, it might well be my own finish. The one thought I can't live with is that you have given way to despair. That is why, darling Evie, I repeatedly impress upon you the need for iron fortitude and boundless patience - no matter what setbacks the future may hold. Just as much as I, you must continue to be the “good soldier" you have always been—for both our sakes, but especially for the punkin.

Don't let my little exhortation discourage you, Sweet. I’m still hopeful of a happy time together before we have further cause for heartbreak. I love you with all my heart, my lovely. A sweet kiss for my adored punkin. Love to all from

Your Phil
Posted by Marilyn at 7:36 AM