Post #653 - May 19, 1945 I've Warned Everyone That If You Do Come Home That I Want You All to Myself the First Night and Luckily, the Bomb Had Malfunctioned 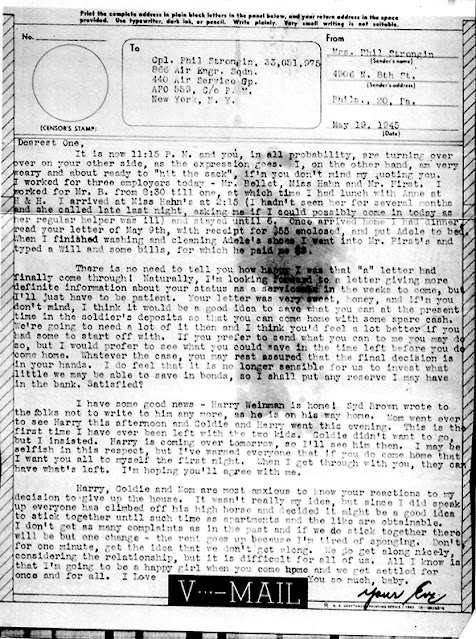 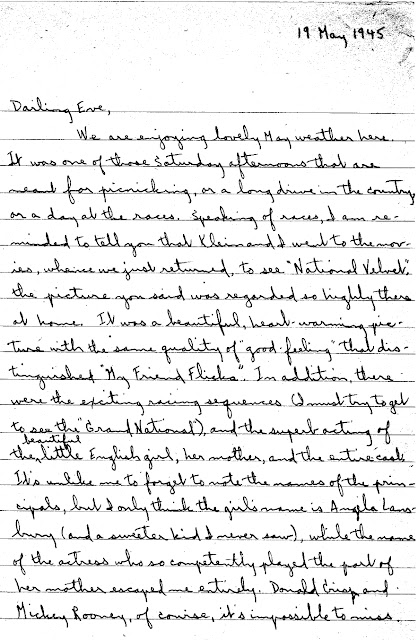 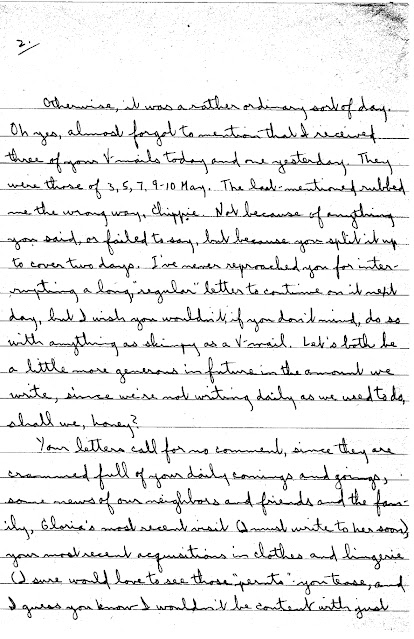 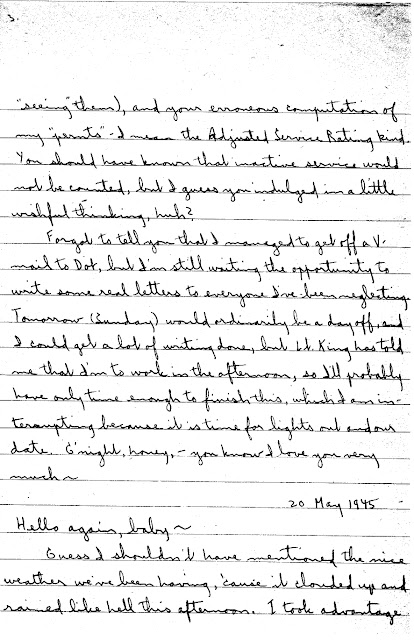 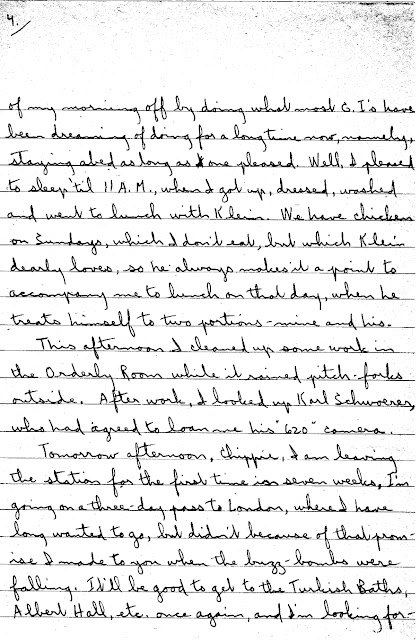 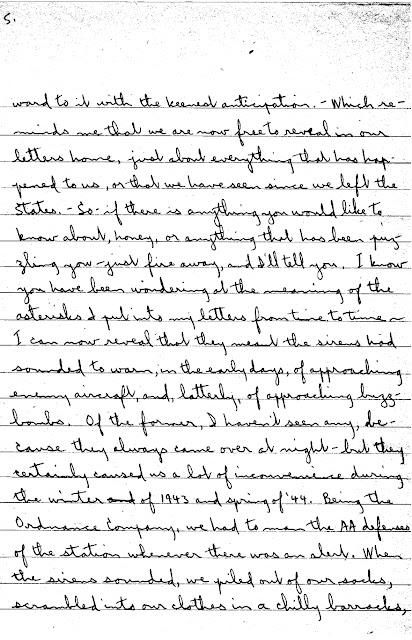 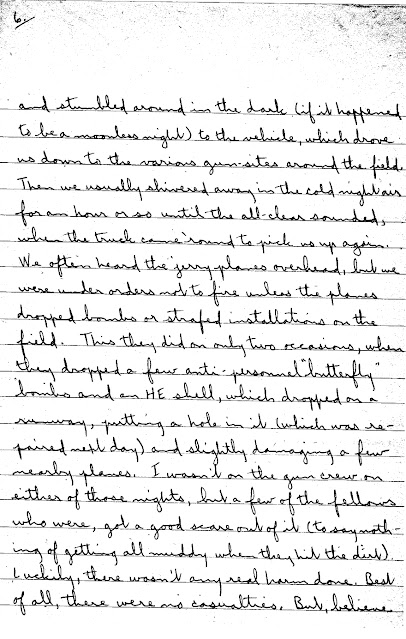 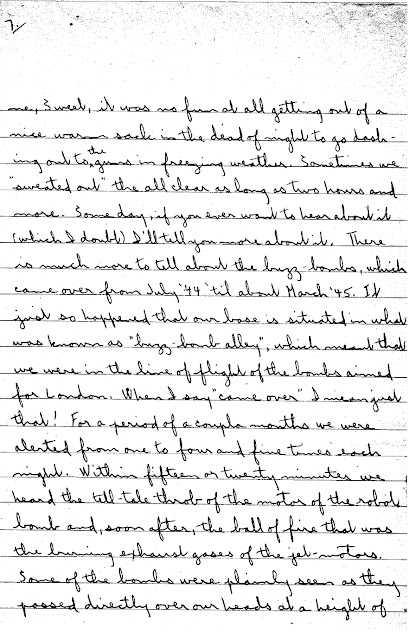 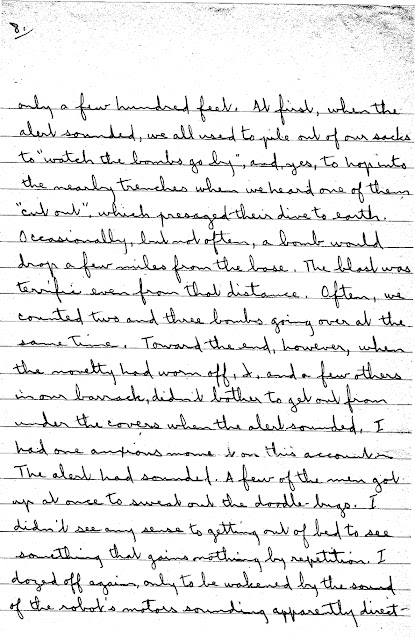 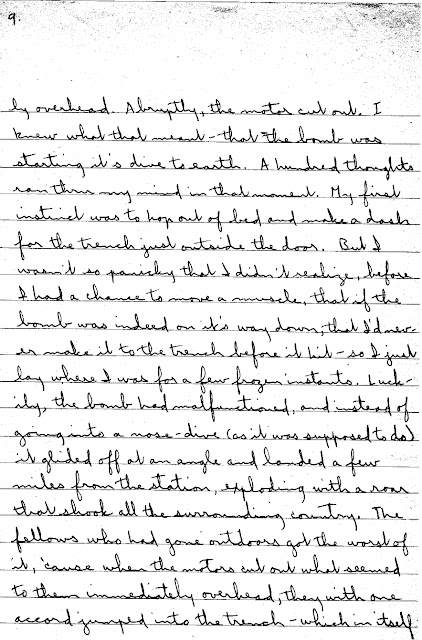 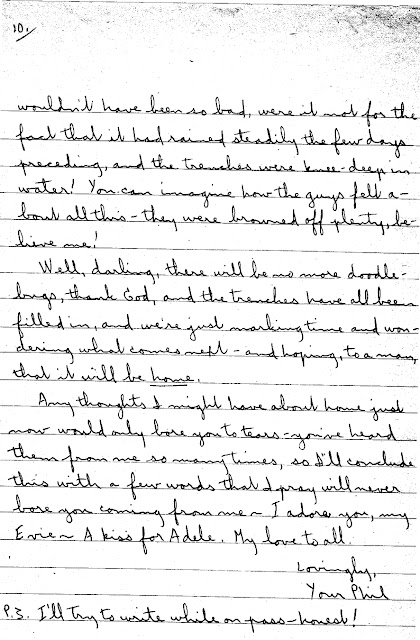 It is now 11:15 P.M. and you, in all probability, are turning over over on your other side, as the expression goes. I, on the other hand, am very weary and about ready to "hit the sack", if'n you don't mind my quoting you. I worked for three employers today - Mr. Bellet, Miss Hahn and Mr. First. I worked for Mr. B. from 8:30 till one, at which time I had lunch with Anne at H. & H. I arrived at Miss Hahn's at 2:15 (I hadn't seen her for several months and she called late last night, asking me if I could possibly come in today as her regular helper was ill) and stayed until 6. Once arrived home I had dinner, read your letter of May 9th, with receipt for $55 enclosed, and put Adele to bed. When I finished washing and cleaning Adele'a shoes I went into Mr. First's and typed a Will and some bills, for which he paid me $3.

There is no need to tell you how happy I was that "a" letter had finally come through! Naturally, I'm looking forward to a letter giving more definite information about your status as a serviceman in the weeks to come, but I'll just have to be patient. Your letter was very sweet, honey, and if’n you don't mind, I think it would be a good idea to save what you can at the present time in the soldier's deposits so that you can come home with some spare cash. We're going to need a lot of it then and I think you'd feel a lot better if you had some to start off with. If you prefer to send what you can to me you may do so, but I would prefer to see what you could save in the time left before you do come home. Whatever the case, you may rest assured that the final decision is in your hands. I do feel that it is no longer sensible for us to invest what little we may be able to save In bonds, so I shall put any reserve I may have in the bank. Satisfied?

I have some good news - Harry Weinman is home! Syd Brown wrote to the folks not to write to him any more, as he is on his way home. Mom went over to see Harry this afternoon and Goldle and Harry went this evening. Thls is the first time I have ever been left with the two kids. Goldle didn't want to go but I insisted. Harry is coming over tomorrow, so I'll see him then. I may be selfish in this respect, but I've warned everyone that if you do come home that I want you all to myself the first night. When I get through with you, they can have what's left. I'm hoping you'll agree with me.

Harry, Goldie and Mom are most anxious to know your reactions to my decision to give up the house. It wasn't really my idea, but since I did speak up everyone has climbed off his high horse and decided it might be a good idea to stick together until such time as apartments and the like are obtainable. I don't get as many complaints as in the past and if we do stick together there will be but one change - the rent goes up because I'm tired of sponging. Don't for one minute, get the idea that we don't get along. We do get along nicely, considering the relationship, but it is difficult for all of us. All I know is that I'm going to be a happy girl when you come home and we get settled for once and for all. I Love You so much, baby.
Your Eve

We are enjoying lovely May weather here. It was one of those Saturday afternoons that are meant for picnicking, or a long drive in the country, or a day at the races. Speaking of races, I am reminded to tell you that Klein and I went to the movies, whence we just returned to see "National Velvet” the picture you said was regarded so highly there at home. It was a beautiful, heart-warming picture with the same quality of good feeling that distinguished “My Friend Flicka". In addition, there were the exciting racing sequences (I must try to get to see the Grand National), and the superb acting of the beautiful little English girl, her mother, and the entire cast. It's unlike me to forget to note the names of the principals, but I only think the girl's name is Angela Lansbury (and a sweeter kid I never saw), while the name of the actress who so competently played the part of her mother escaped me entirely. Donald Crisp and Mickey Rooney, of course, it's impossible to miss.

Otherwise, it was a rather ordinary sort of day. Oh yes, almost forgot to mention that I received three of your V-mails today and one yesterday. They were those of 3, 5, 7, 9-10 May. The last mentioned rubbed me the wrong way, Chippie. Not because of anything you said, or failed to say, but because you split it up to cover two days. I've never reproached you for interrupting a long “regular" letter to continue on it next day, but I wish you wouldn't, if you don't mind, do so with anything as skimpy as a V-mail. Let's both be a little more generous in future in the amount we write, since we're not writing daily as we used to do shall we, honey?

Your letters call for no comment, since they are crammed full of your daily comings and goings, some news of our neighbors and friends and the family, Gloria's most recent visit (I must write to her soon), your most recent acquisitions in clothes and lingerie (I sure would love to see those “pernts”, you tease, and I guess you know I wouldn't be content with just seeing them), and your erroneous computation of my “pernts" - I mean the Adjusted Service Rating kind. You should have known that inactive service would not be counted, but I guess you indulged in a little wishful thinking, huh?
Forgot to tell you that I managed to get off a V-mail to Dot, but I'm still waiting the opportunity to write some real letters to everyone l have been neglecting. Tomorrow (Sunday) would ordinarily be a day off and I could get a lot of writing done, but Lt. King has told me that I’m to work in the afternoon, so I'll probably have only time enough to finish this, which I am interrupting because it is time for lights out and our date. G’night, honey,—you know I love you very much—