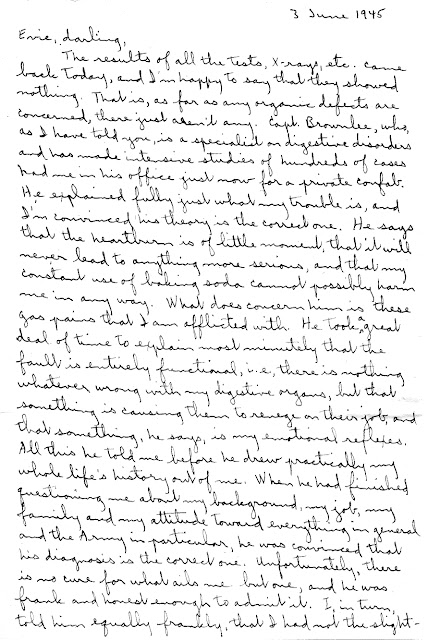 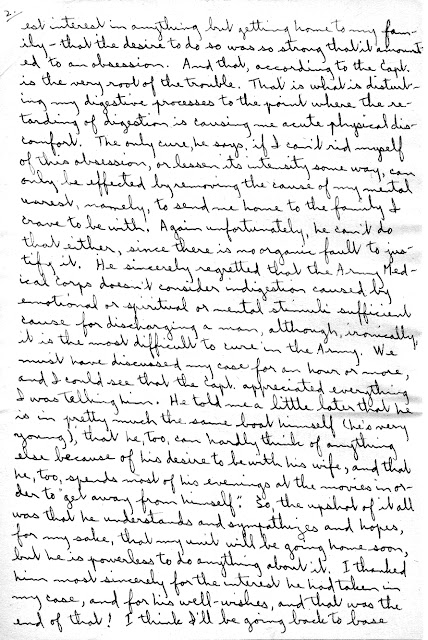 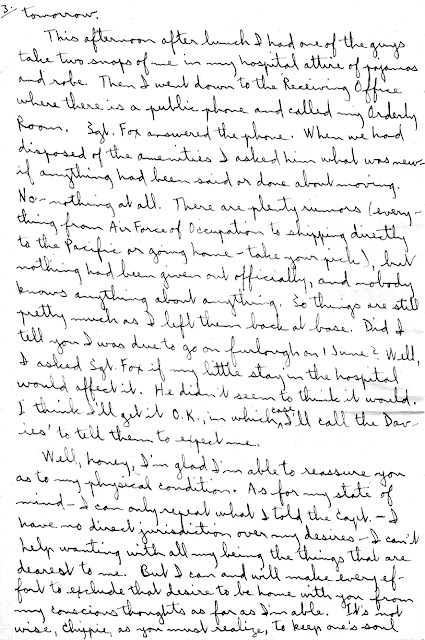 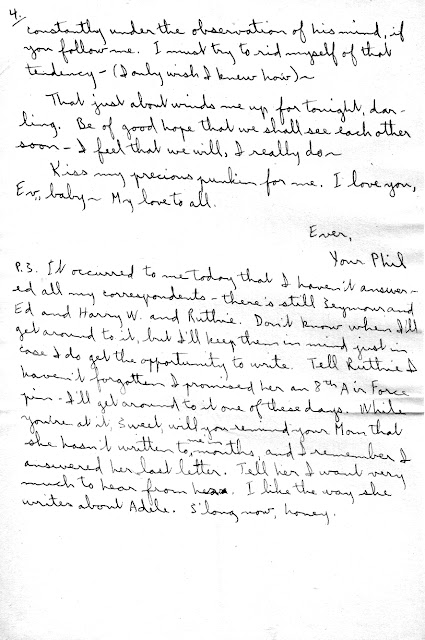 The results of all the tests, X-rays, etc. came back today, and I'm happy to say that they showed nothing. That is, as far as any organic defects are concerned, there just aren't any. Capt. Brownlee, who, as I have told you, is a specialist on digestive disorders and has made intensive studies of hundreds of cases had me in his office just now for a private confab. He explained fully just what my trouble is, and I'm convinced his theory is the correct one. He says that the heartburn is of little moment, that it will never lead to anything more serious, and that my constant use of baking soda cannot possibly harm me in any way. What does concern him is these gas pains that I'am afflicted with. He took a great deal of time to explain most minutely that the fault is entirely functional, i.e., there is nothing whatever wrong with my digestive organs, but that something is causing them to renege on their job, and that something, he says, is my emotional reflexes. All this he told me before he drew practically my whole life's history out of me. When he had finished questioning me about my background, my job, my family and my attitude toward everything in general and the Army in particular, he was convinced that his diagnosis is the correct one. Unfortunately, there is no cure for what ails me but one, and he was frank and honest enough to admit it. I, in turn, told him equally frankly, that I had not the slightest interest in anything but getting home to my family - that the desire to do so was so strong that it amounted to an obsession. And that, according to the Capt. is the very root of the trouble. That is what is disturbing my digestive processes to the point where the retarding of digestion is causing me acute physical discomfort. The only cure, he says, if I can't rid myself of this obsession, or lessen its intensity some way, can only be effected by removing the cause of my mental unrest, namely, to send me home to the family I crave to be with! Again unfortunately, he can't do that either, since there is no organic fault to justify it. He sincerely regretted that the Army Medical corps doesn't consider indigestion caused by emotional or spiritual or mental stimuli sufficient cause for discharging a man, although, ironically, it is the most difficult to cure in the Army. We must have discussed my case for an hour or more and I could see that the Capt, appreciated everything I was telling him. He told me a little later that he is in pretty much the same boat himself (he's very young), that he, too, can hardly think of anything else because of his desire to be with his wife, and that he, too, spends most of his evenings at the movies in order to “get away from himself.” So, the upshot of it all was that he understands and sympathizes and hopes, for my sake, that my unit will be going home soon, but he is powerless to do anything about it. I thanked him most sincerely for the interest he had taken in my case, and for his well-wishes, and that was the end of that! I think I'll be going back to base tomorrow.

This afternoon after lunch I had one of the guys take two snaps of me in my hospital attire of pajamas and robe. Then I went down to the Receiving Office where there is a public phone and called my Orderly Room. Sgt. Fox answered the phone. When we had disposed of the amenities I asked him what was new - if anything had been said or done about moving. No—nothing at all. There are plenty rumors (everything from Air Force of Occupation to shipping directly to the Pacific or going home - take your pick), but nothing had been given out officially, and nobody knows anything about anything. So things are still pretty much as I left them back at base. Did I tell you I was due to go on furlough on 1 June? Well, I asked Sgt. Fox if my little stay in the hospital would affect it. He didn't seem to think it would. I think I'll get it O.K., in which case I’ll call the Davies' to tell them to expect me.

Well, honey, I'm glad I'm able to reassure you as to my physical condition. As for my state of mind - I can only repeat what I told the Capt. - I have no direct jurisdiction over my desires - I can't help wanting with all my being the things that are dearest to me. But I can and will make every effort to exclude that desire to be home with you from my conscious thoughts as far as I'm able. It's not wise, Chippie, as you must realize, to keep one's soul constantly under the observation of his mind, if you follow me. I must try to rid myself of that tendency - (I only wish I knew how) ~

That just about winds me up for tonight, darling. Be of good hope that we shall see each other soon - I feel that we will, I really do ~

Kiss my precious punkin for me. I love you, Ev, baby ~ My love to all.

P.S. It occurred to me today that I haven't answered all my correspondents - there's still Seymour and Ed and Harry W. and Ruthie. Don't know when I’ll get around to it, but I'll keep them in mind just case I do get the opportunity to write. Tell Ruthie I haven't forgotten I promised her an 8th Air Force pin - I'll get around to it one of these days. While you're at it, Sweet, will you remind your Mom that she hasn't written to me in months, and I remember I answered her last letter. Tell her I want much to hear from her. I like the way she writes about Adele. S'long now, honey.
Posted by Marilyn at 12:36 PM