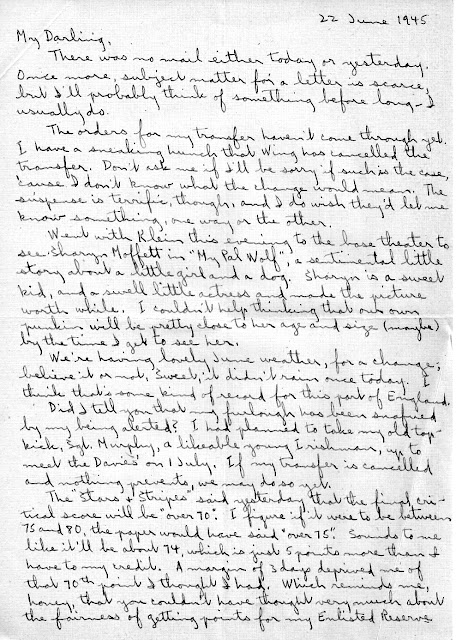 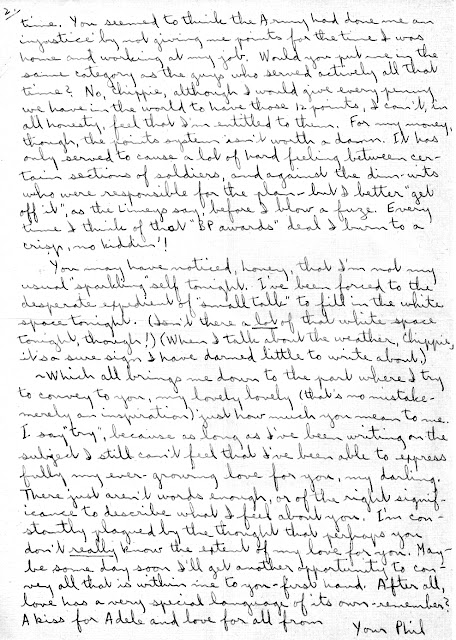 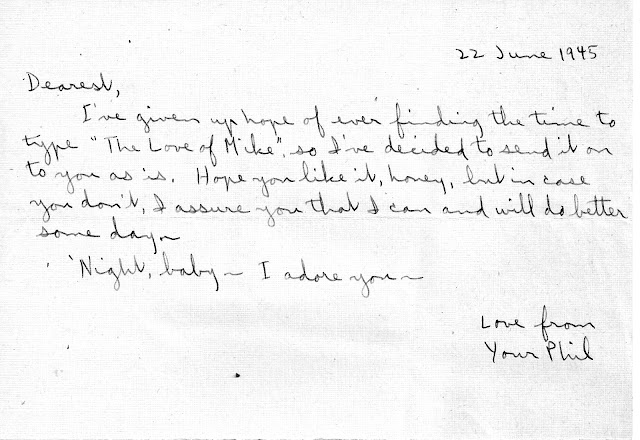 There was no mail either today or yesterday. Once more, subject matter for a letter is scarce, but I'll probably think of something before long - I usually do.

The orders for my transfer haven't come through yet. I have a sneaking hunch that Wing has cancelled the transfer. Don't ask me if I'll be sorry if such is the case, ’cause I don't know what the change would mean. The suspense is terrific, though, and I do wish they'd let me know something, one way or the other.

Went with Klein this evening to the base theater to see "Sharyn Moffett in "My Pal Wolf", a sentimental little story about a little girl and a dog. Sharyn is a sweet kid, and a swell little actress and made the picture worth while. I couldn't help thinking that our own punkin will be pretty close to her age and size (maybe) by the time I get to see her.

We're having lovely June weather, for a change; believe it or not, Sweet, it didn’t rain once today. I think that's some kind of record for this part of England.

Did I tell you that by my furlough has been snafued by my being alerted? I had planned to take my old top-kick, Sgt. Murphy, a likeable young Irishmen, up to meet the Davies' on 1 July. If my transfer is cancelled and nothing prevents, we may do so yet.

The "Stars & Stripes" said yesterday that the final critical score will be "over 70". I figure if it were to be between 75 and 80, the paper would have said "over 75". Sounds to me like it'll be about 74, which is just 5 points more than I have to my credit. A margin of 3 days deprived of that 70th point I thought I had. Which reminds me, honey, that you couldn't have thought very much about the fairness of getting points for my Enlisted Reserve time. You seemed to think the Army had done me an injustice by not giving points for the time I was home and working at my job. Would you put me in the same category as the guys who served actively all that time? No, Chippie, although I would give every penny we have in the world to have those 12 points, I can't, in all honesty, feel that I'm entitled to them. For my money, though, the points system isn't worth a damn. It has only served to cause a lot of hard feeling between certain sections of soldiers, and against the dim-wits who were responsible for the plan—but I better "get off it", as the Limeys say, before I blow a fuze. Every time I think of that "BP awards" deal I burn to a crisp, no kiddin'!

You may have noticed, honey, that I'm not my usual “sparkling self” tonight. I’ve been forced to the desperate expedient of “small talk” to fill in the white space tonight. (Isn't there a lot of that white space tonight, though!) (When I talk about the weather, Chippie, it's a sure sign I have darned little to write about.)"

~ Which all brings me down to the part where I try convey to you, my lovely lovely (that's no mistake - merely an inspiration) just how much you mean to me. I say “try", because as long as I've been writing on the subject I still can't feel that I've been able to express fully my ever-growing love for you, my darling. There just aren't words enough, or of the right significance to describe what I feel about you. I’m constantly plagued by the thought that perhaps you don't really know the extent of my love for you. Maybe some day soon I’ll get another opportunity to convey all that is within me to you - first hand. After all, love has a very special language of its own - remember? A kiss for Adele and love for all from
Your Phil

I've given up hope of ever finding the time to type “The Love of Mike", so I've decided to send it on you as is. Hope you like it, honey, but in case you don't, I assure you that I can and will do better some day—
‘Night, baby—I adore you—

Love from
Your Phil
Posted by Marilyn at 8:09 AM